Toro was the one they came to see.

Thousands of people flocked to the airport to see Toro’s one-man aerial show that ended with the spectacular “Wall of Fire.”

“It’s great to watch, but flying this Viper in front of that wall of flame is just awesome,” said Smith, 34, a native of Price, Utah.

Central Coast AirFest to fill the skies over Santa Maria with aviation's graceful past, thunderous present

After Smith put his viper through its paces, he ended the show by racing over the runway, trying to beat the Wall of Fire.

“I do 620 knots (713 miles per hour). There’s a thousand feet of flames, about 200 feet high, chasing me,” said Smith. “I can’t really feel the heat inside the cockpit but the people lining the runway can sure feel it.”

Smith and his team came to the West Coast from South Carolina’s Shaw Air Force Base.

For his crew chief, Luis Lopez, it is a return home.

“I’m from San Bruno and it’s good to be home,” said Lopez. “We had a show up in Sacramento last weekend, and my parents came out.

“And everyone loves the show. It’s fast, it’s loud and it’s spectacular to watch.”

While the “Wall of Fire” was the main event, it was by no means the only attraction.

“This is pretty cool seeing them take off and land and do tricks,” said Aidan Scott, a Boy Scout who began his day as a volunteer at the bounce house. “I love the smoke. It’s exciting and surprising because you don’t see it coming.”

“I flew P-3 Orions, and my grandfather and father were Navy pilots before me,” said Scott Place. "Maybe Aidan will be a fourth-generation pilot.

“Growing up, I went to air shows all the time," he said. "I loved the Blue Angels. This is a very good air show, and I love sharing it with my son.”

The airport grounds were filled with military and law enforcement aircraft and crews, on hand to give people a look at the equipment and personnel who do such valuable work.

“It’s a little like a county fair but with military jets and other aircraft as the main attraction,” said event organizer Chris Kunkle. “We used to have the Golden State Air Fair and later Thunder in the Valley but that ended in 2015. We started reorganizing an air show in 2017 and were able to bring it back last year.”

The event also serves as a fundraiser. Last year’s AirFest earned $11,500 that was donated to local nonprofit organizations,

This year’s funds are earmarked for the Special Olympics.

“And it’s also a great community event,” Kunkle added. “The AirFest generates about $450,000 for the community — hotels, restaurants and stores."

Capt. Jim Bergman flies over the Santa Maria Valley and Righetti High School, lower left, in his AT-6 Texan, a single-engine advanced aircraft…

“This is a fabulous event for our community,” said Santa Maria City Councilwoman Etta Waterfield. “It brings people to Santa Maria from all over.”

“And I was in charge of the weather. That’s why it’s so good,” said Patino.

“I want people to know that the aviation community is a welcoming community,” said Kunkle. “It’s not something that is impossible to get into.”

The day kicks off with the Special Olympics Plane Pull at 8 a.m.

The Wall of Fire pyro flight will be shortly after 3 p.m., with the weekend event wrapping up at 5 p.m.

The word “kibbutzim” was the nine-letter obstacle Edda Bevilaqua had left to scale Saturday inside the Santa Maria Elks Lodge. 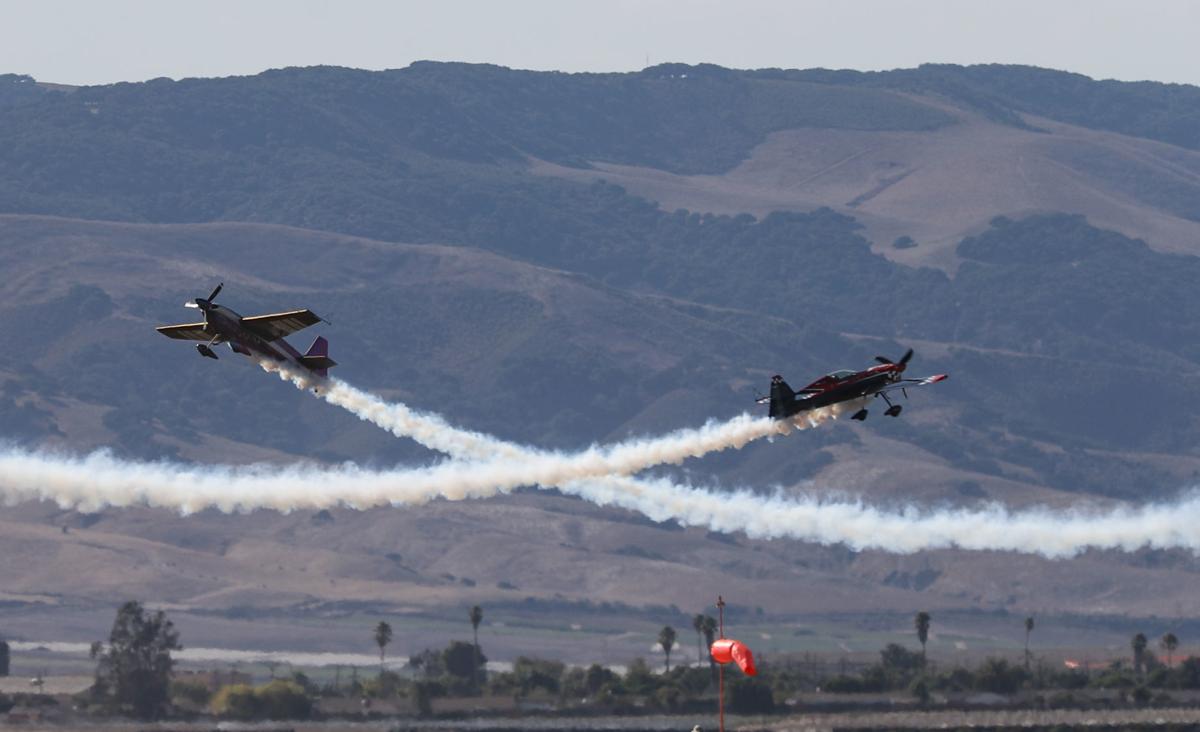 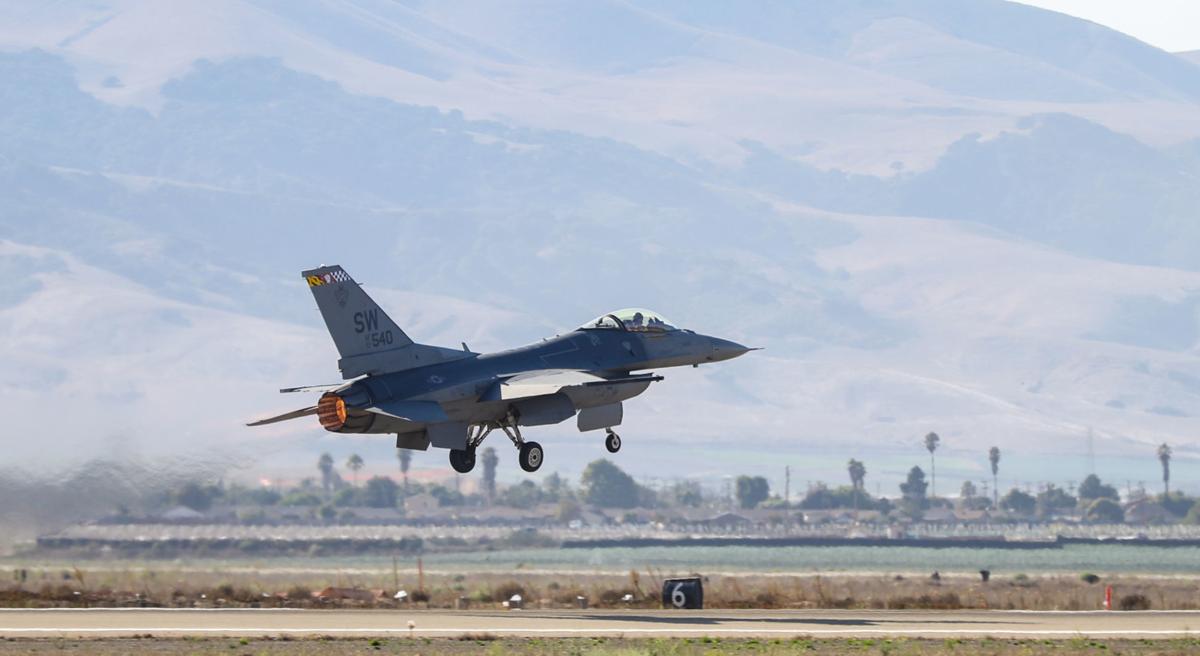 An F-16 Fighting Falcon, part of the Viper Demonstration Team and piloted by Maj. Garrett Smith, takes off Saturday during the second annual Central Coast AirFest at the Santa Maria Public Airport. 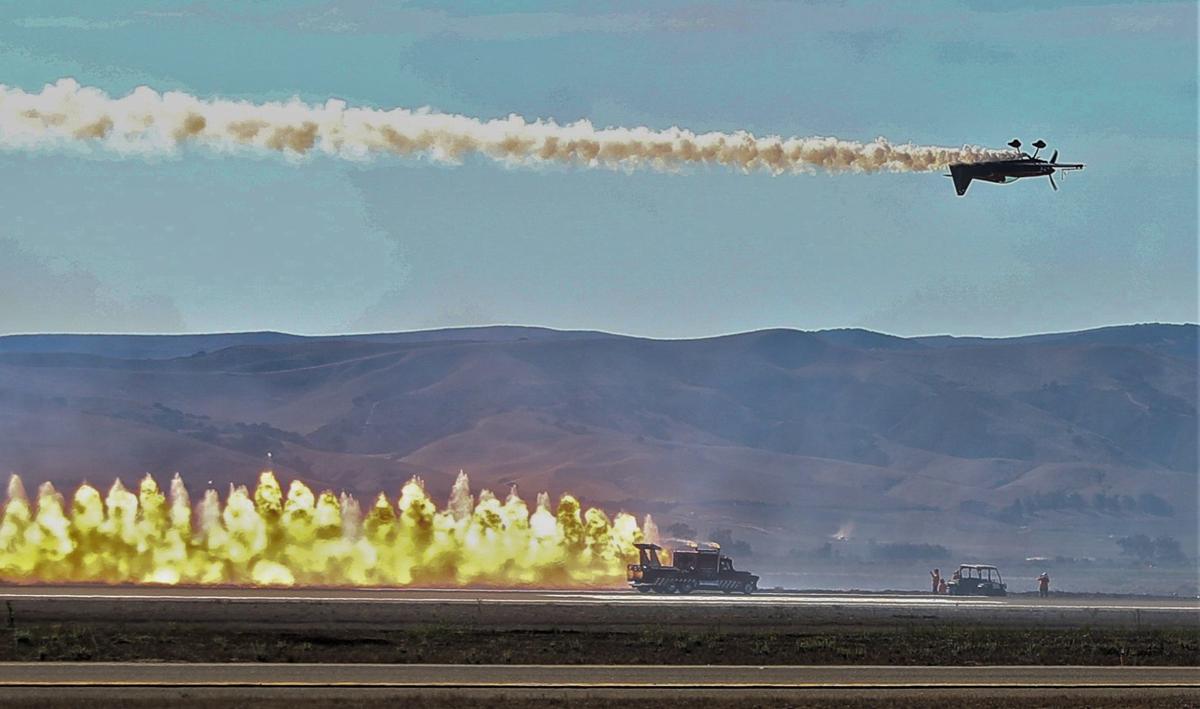 An aerobatic plane goes upside down as pyrotechnics explode behind it Saturday during the second annual Central Coast AirFest at the Santa Maria Public Airport.