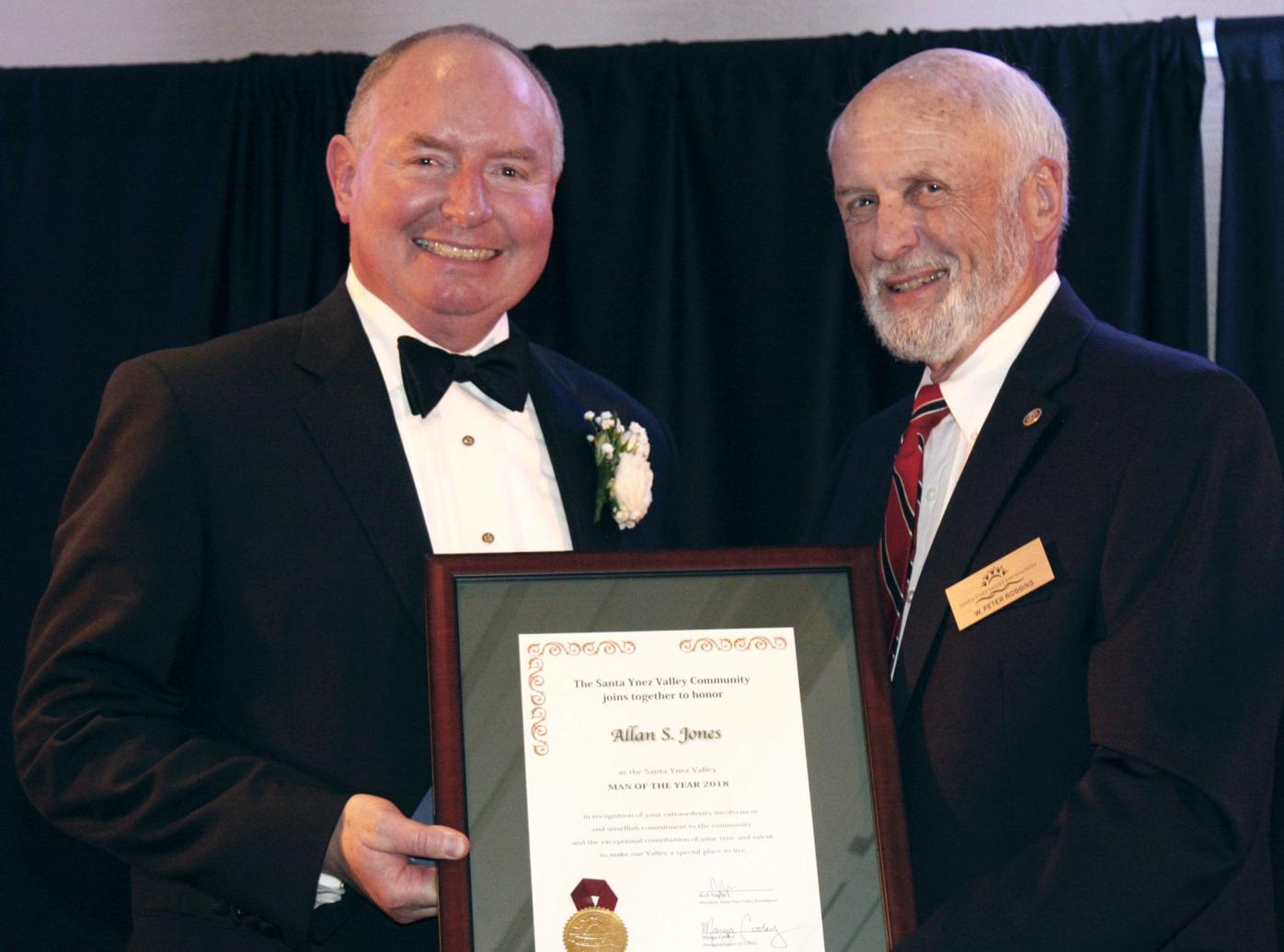 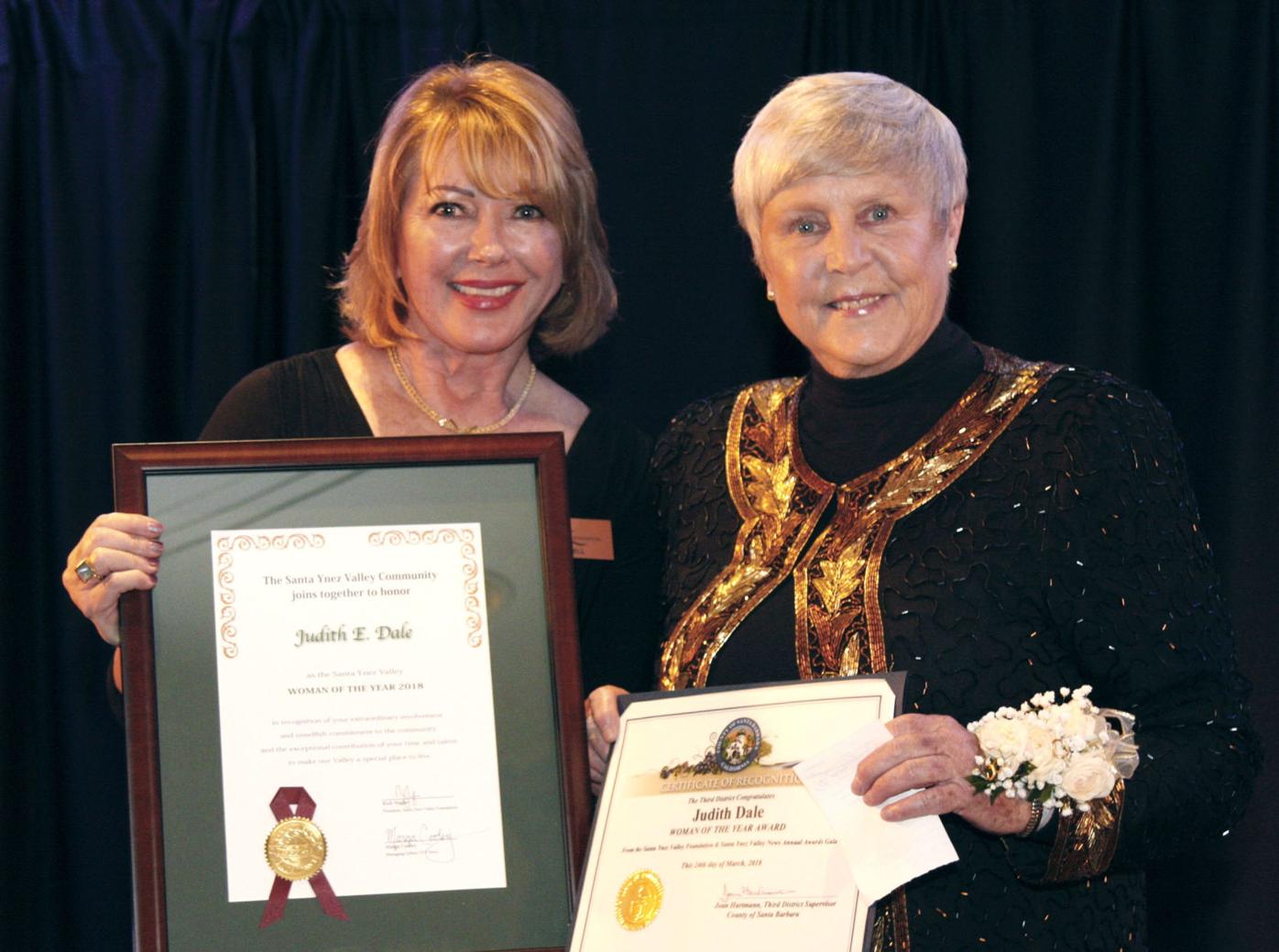 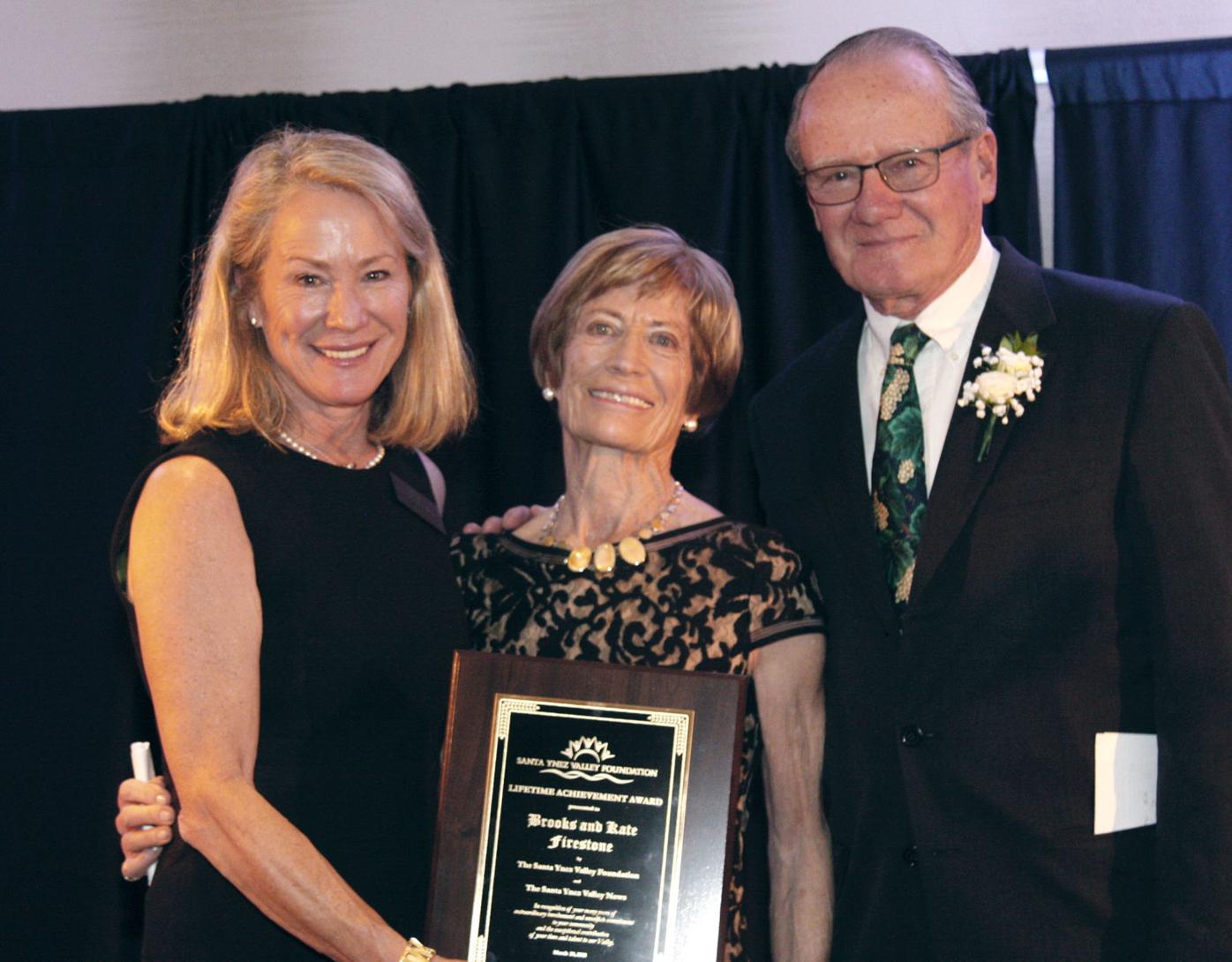 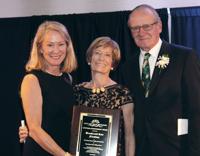 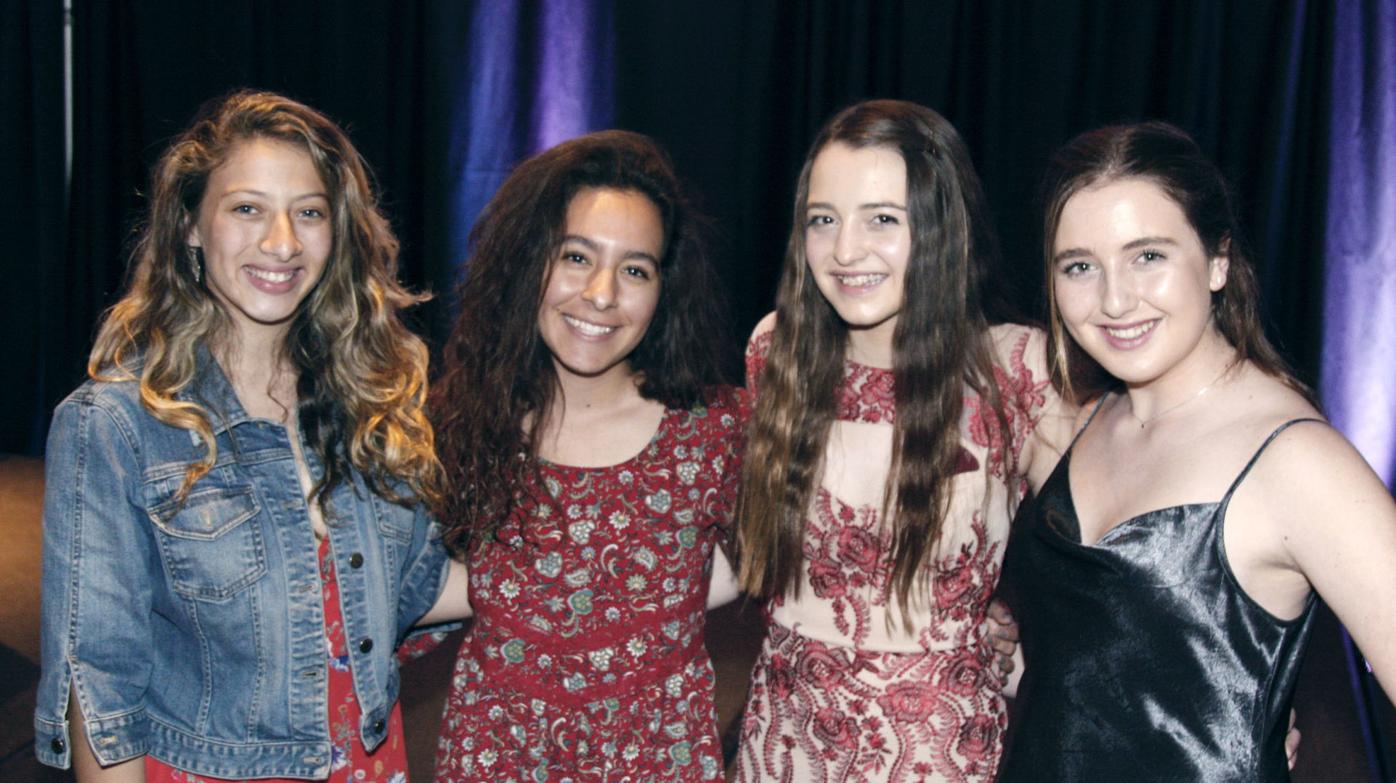 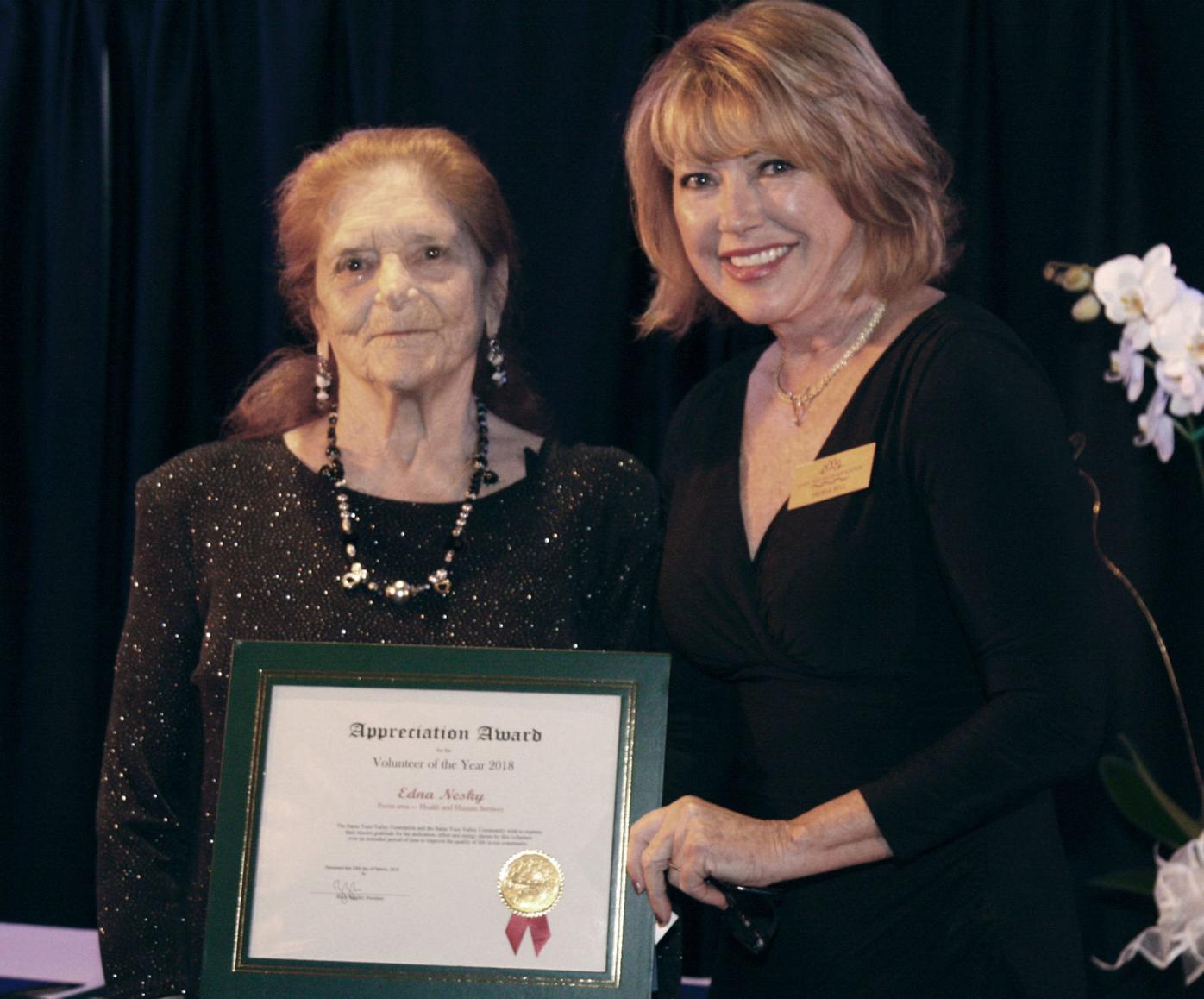 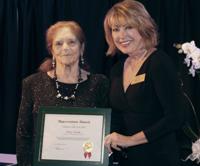 The Santa Ynez Valley Foundation and Santa Ynez Valley News honored Edna Nesky, left, as Volunteer of the Year for Health and Human Services, at the annual banquet held Saturday. Her award was presented by Tresha Sell, right. 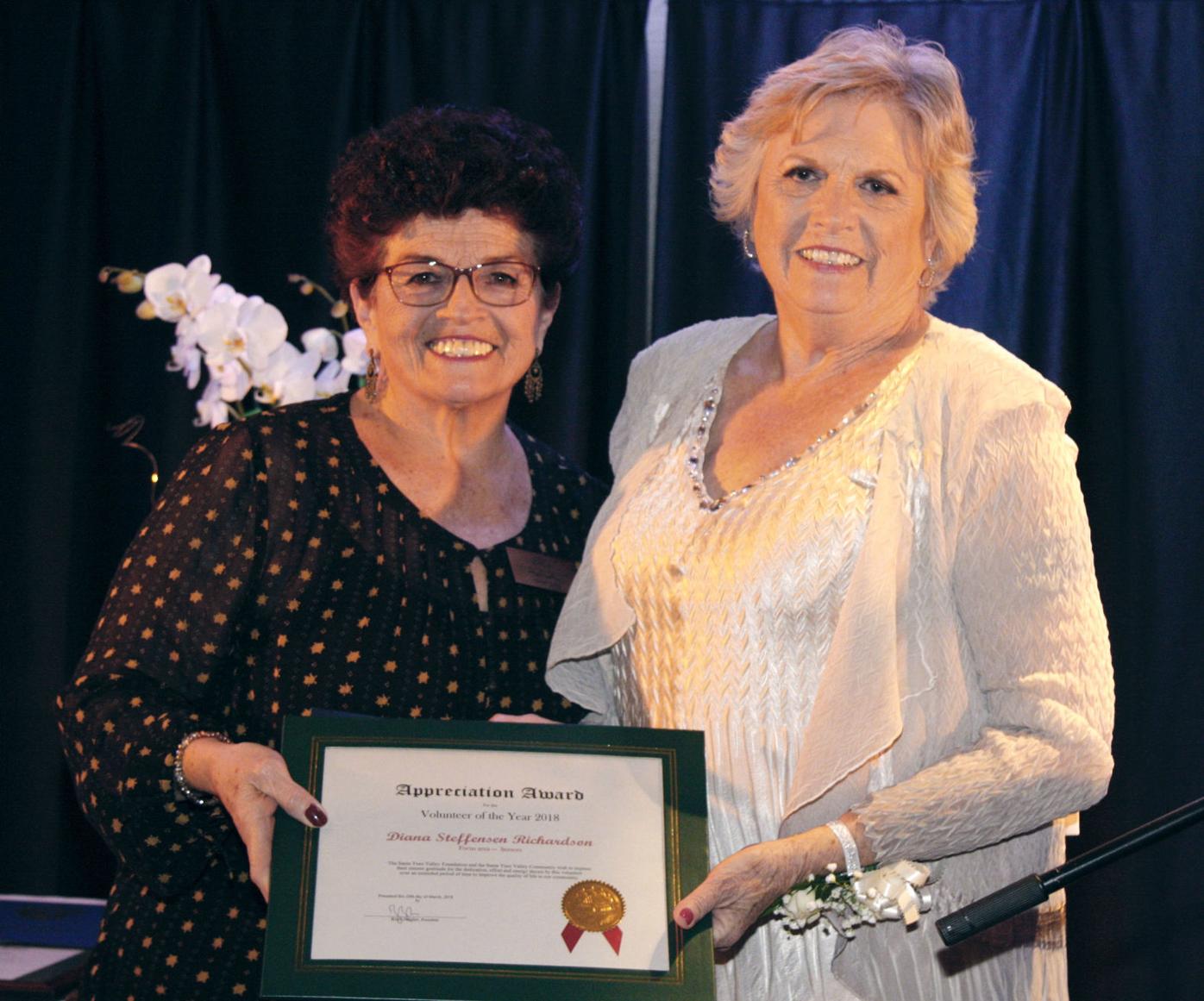 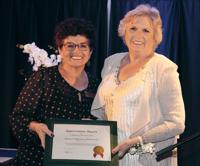 The Santa Ynez Valley Foundation and Santa Ynez Valley News honored Diana Steffensen Richardson, right, as Volunteer of the Year for Seniors, at the annual banquet held Saturday. The award was presented by Terry Ames, left. 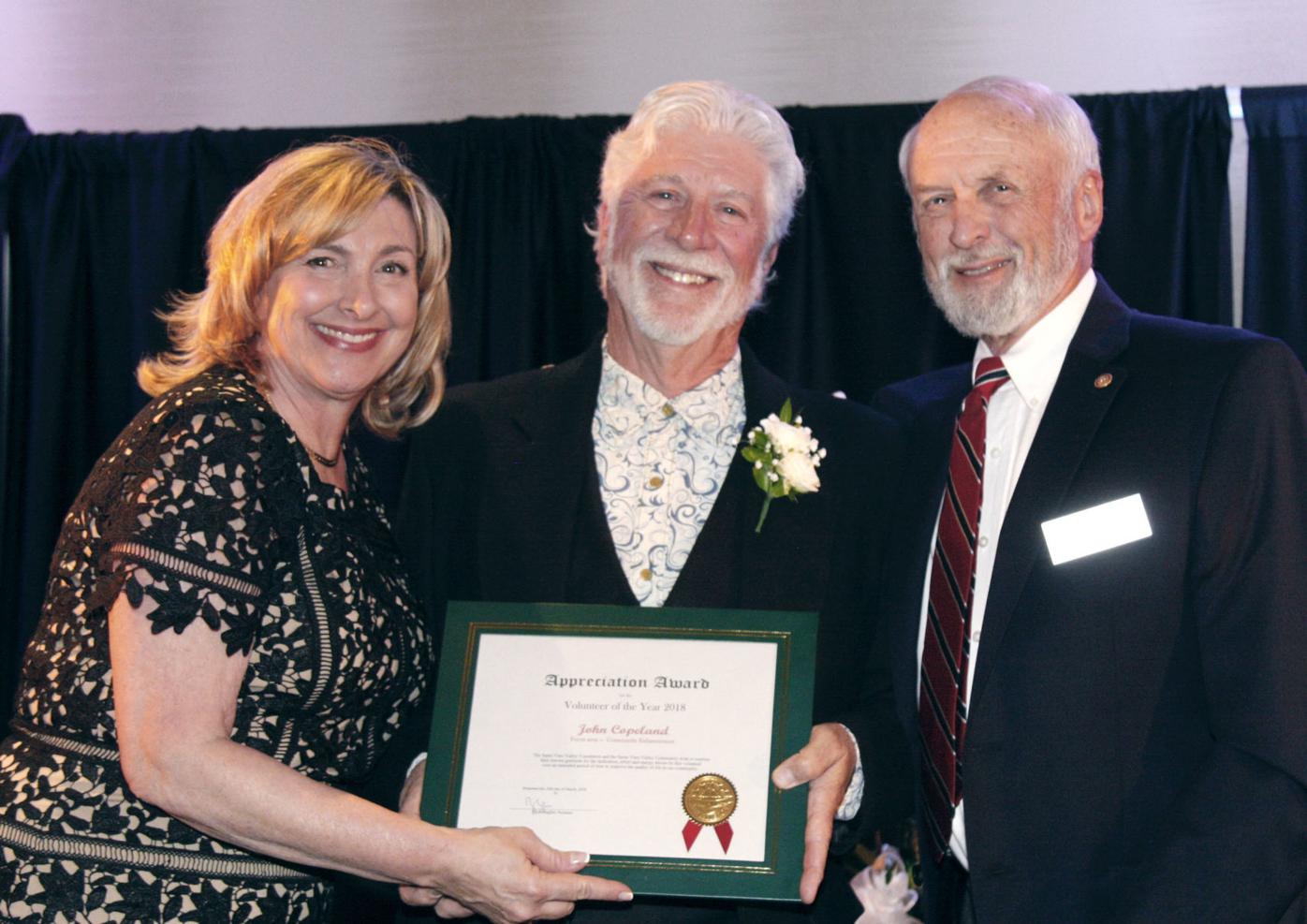 The Santa Ynez Valley Foundation and Santa Ynez Valley News honored John Copeland, center, as Volunteer of the Year for Community Enhancement, at the annual banquet held Saturday. The award was presented by Anne Christensen, left, and Peter Robbins, right.

The Santa Ynez Valley Foundation and Santa Ynez Valley News honored Edna Nesky, left, as Volunteer of the Year for Health and Human Services, at the annual banquet held Saturday. Her award was presented by Tresha Sell, right.

The Santa Ynez Valley Foundation and Santa Ynez Valley News honored Diana Steffensen Richardson, right, as Volunteer of the Year for Seniors, at the annual banquet held Saturday. The award was presented by Terry Ames, left.

The Santa Ynez Valley Foundation and Santa Ynez Valley News honored John Copeland, center, as Volunteer of the Year for Community Enhancement, at the annual banquet held Saturday. The award was presented by Anne Christensen, left, and Peter Robbins, right.

Santa Ynez Valley residents for whom giving back to the community is a mission and a passion, were honored Saturday night at the annual Man and Woman of the Year Awards Banquet at the Santa Ynez Valley Marriott.

Nearly 300 people turned out to honor not only Woman of the Year Judith E. Dale and Man of the Year Allan S. Jones, but also to present the Lifetime Achievement Award to Brooks and Kate Firestone in a program that was sometimes heart-wrenching and at other times hilarious.

Volunteer of the Year Awards were also presented to Edna Nesky for her work in health and human services, Diana Steffensen Richardson for her efforts to assist seniors and John Copeland for his contributions to community enhancement.

Four young women — including two high school freshmen — received Youth in Service Awards for their volunteer efforts to help others across a broad spectrum of concerns.

Their efforts have included bringing an end to bullying, providing clothing to needy teens, inspiring youths through art, fitting custom prosthetics to children in Mozambique, helping others using equestrian therapy, taking health care services to families in Ghana, working to stop school violence, raising funds to build a school and volunteering with numerous other causes.

“These nominees have made an indelible mark on the community,” foundation President Richard Nagler told the crowd in his opening remarks.

Those sentiments were echoed by Kyle Abello, who served as master of ceremonies for the evening.

“It starts with a willingness to help and turns into a lifelong passion,” he said of the spirit of volunteerism exhibited by the award winners.

Indeed, the accomplishments, projects completed and organizations helped by this year’s honorees are almost too numerous to list, and the honorees reactions to being chosen covered the range of human emotions.

But in accepting their awards, they gave some insight into why they do what they do, expressing humility and even doubt that they deserved the honor.

“Mostly, I just like to be with people, and it’s just great to be able to help people,” said Nesky, who volunteers at Friendship House and worked at the New to You thrift shop for 20 years.

She admitted she got a little mad when informed she was chosen for what she called “an awesome honor,” believing others deserved it more.

Since joining the Santa Ynez Valley Cottage Hospital Auxiliary in 1996, Nesky has volunteered more than 7,000 hours.

“Being a volunteer is easy; standing up here is not so easy,” Richardson said after receiving her award for, in part, helping seniors at Atterdag Village, especially its frailest residents.

She urged others to get involved: “You can be a volunteer. It’s easy, it’s fun. Find a place in your life where you like to volunteer.”

“It’s quite a surprise to be honored for something I love and have a passion for,” he said. “Being engaged and involved in the community makes it vibrant and resilient.”

He noted everyone has been helped out by others on the journey of life and therefore has an obligation to help others.

At age 8, Antoci wrote a book to help children deal with bullying that is now in 200 schools and was made into a play by PCPA, and she travels to schools all over the state.

Now a high school freshman, she also has started charities to give jeans to teens and dresses to needy girls, and she shared Copeland’s sentiments, noting “it’s so important to help others.”

“There is almost no reason why any person cannot volunteer,” she said.

Garcia, who has a passion for inspiring teens through the arts, formed the Santa Ynez Valley Teen Arts nonprofit to help give free art instruction to youths.

“I believe art is something everyone cherishes inside them,” she said.

Like many others, she credited her volunteerism and successes to family.

“My mom is such a self-sacrificing woman,” she said. “I wouldn’t be here without her."

Hoose has been riding horses since she was 5 years old, so it’s perhaps only natural that she volunteers with the Santa Ynez Valley Therapeutic Riding Program, but she also is involved the the National Charity League, the Buellton Senior Center, People Helping People and more.

She credited her activism to Karie McCorkle, volunteer coordinator with the Therapeutic Riding Program, who also nominated Hoose for the award.

“She really taught me the importance of hard work and how I can make a difference in the community,” said Hoose, who through the Youth and Government program with the YMCA introduced a bill to increase sentences for sex offenders. She also participated in the march against gun violence “because enough is enough.”

But she has an optimistic vision for the Valley.

“I can’t wait to see our small corner of the world blossom,” she said.

Torres was described as someone who would never let obstacles stop her. She’s involved in nine clubs, with leadership roles in three, and has volunteered 400 hours with the United Way.

Last year she went to Ghana to help provide 500 families with health care, taught Spanish and English and helped raise funds to build a school.

“We had a mission … a mission to solve poverty,” Torres said, noting, “The first step in ending poverty is giving them a chance.”

She also said that to “make this vision come true” you have to “make it a mission.”

Women of the Year

“The Valley has truly benefited from the volunteerism of Judith Dale,” said Tresha Sell, a foundation director, noting Dale’s contributions are numerous.

A former Buellton mayor who was instrumental in making it a city, Dale has worked on the Library Advisory Board to make sure programs are tailored for each community and advocated for more library funding.

“I accept on behalf of all those people who will never have the honor of standing up here and being recognized,” she said, referring to the ordinary people who are the unsung heroes quietly volunteering throughout the Valley.

“Hopefully, by helping people I am just doing my small part in carrying on the tradition in Santa Ynez Valley.”

She recalled a student she talked to briefly when she was teaching a sports sociology class of more than 200 students, ending her conversation with “have a great day.”

He came back a few years later as he was preparing to graduate and told her he had planned to commit suicide that day from despair over his studies and trying to adjust to life at UCSB, but her words had given him the will to go on to success.

“The random acts of kindness, we never know what can make a difference in people’s lives,” she said. “It could be the most important thing in that person’s life that day, that week, that year.”

Man of the Year

In reviewing the accomplishments of Jones, former foundation director and 2006 Man of the Year Peter Robbins made references to the award winner’s booming voice as a parade announcer and auctioneer as well as the many projects he’s been involved with and spearheaded.

“They’re all telling examples of his generosity and open heart for the Santa Ynez Valley,” Robbins said.

Taking the microphone, Jones proved himself worthy of stand-up comedy on any stage.

“My volunteering started early when my brother Randy volunteered me to clean the stalls at the Pork Palace,” he joked, adding you have to volunteer for the cemetery. “We’ve just been buried with work. It’s a real undertaking.”

But Jones had a serious message, too.

“We live in such a beautiful place,” he said. “But for the people who move here, the real draw is the people. Why wouldn’t you want to volunteer and give back?”

Foundation director Hayley Firestone Jessup said it was an honor for her to bestow the Lifetime Achievement Award on her parents.

In a rapid and humorous speech, she recounted their disparate backgrounds — hers from England, his from America — and how they met at the stage door of the Metropolitan Opera.

In June, she noted, they’ll celebrate their 60th anniversary.

She talked about how Brooks and Kate made volunteering an event, how they both have the ability to get things done but with different styles.

Between the two of them, the Firestones have served a long list of organizations, including St. Mark's-in-the-Valley Episcopal Church, the Santa Ynez Valley Vintners' Association, the Santa Barbara Choral Society, Direct Relief, Meals on Wheels, the Santa Barbara County FoodBank, Solvang Theaterfest and Visiting Nurse and Hospice Care.

Brooks, who also served in the state Assembly from 1994 to 1998 and as a Santa Barbara County supervisor from 2005 to 2008, said he accepted the award in the name and honor of his old friend Stu Gildred, who died in 2001.

He said Gildred set the standard for the Valley.

Kate said she believes she and Brooks share the same emotion as those who have been recognized before.

“We felt unsure we deserve it and reluctant to be recognized this way,” she said, but she realized, “They wanted to give us a (click) well done.

“The joy of being here this evening with all of you is more than we could have ever dreamed.”

Allan Jones: From 4-H, to Theaterfest, to the cemetery, volunteering's in his blood

Allan Jones is downright comedic when asked about his history in the Santa Ynez Valley, his …

Brooks and Kate Firestone: A lifetime of achievement recognized

When asked what the most rewarding part of her life with Brooks Firestone has been, Kate Fir…

Diana Steffensen Richardson was born to be a caregiver, and has trouble saying no to those i…

Santa Ynez Valley Union High School is turning out winners in the form of authors, nonprofit…