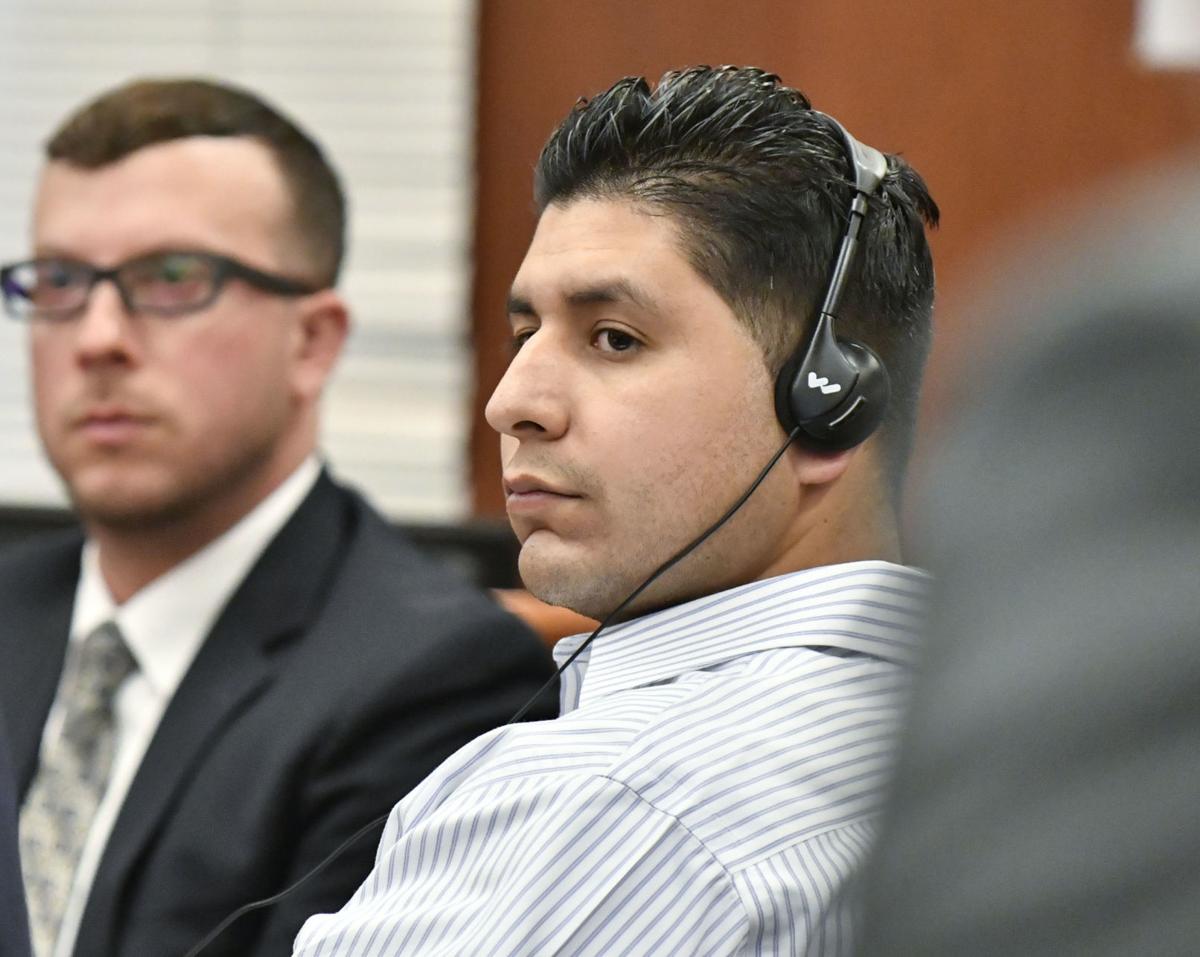 Jose Villagomez listens to opening statements via a translator, left, on his headphones May 21 in Santa Maria Superior Court. Villagomez, who was charged in the 2015 murder of Marilyn Pharis, pleaded guilty Wednesday. 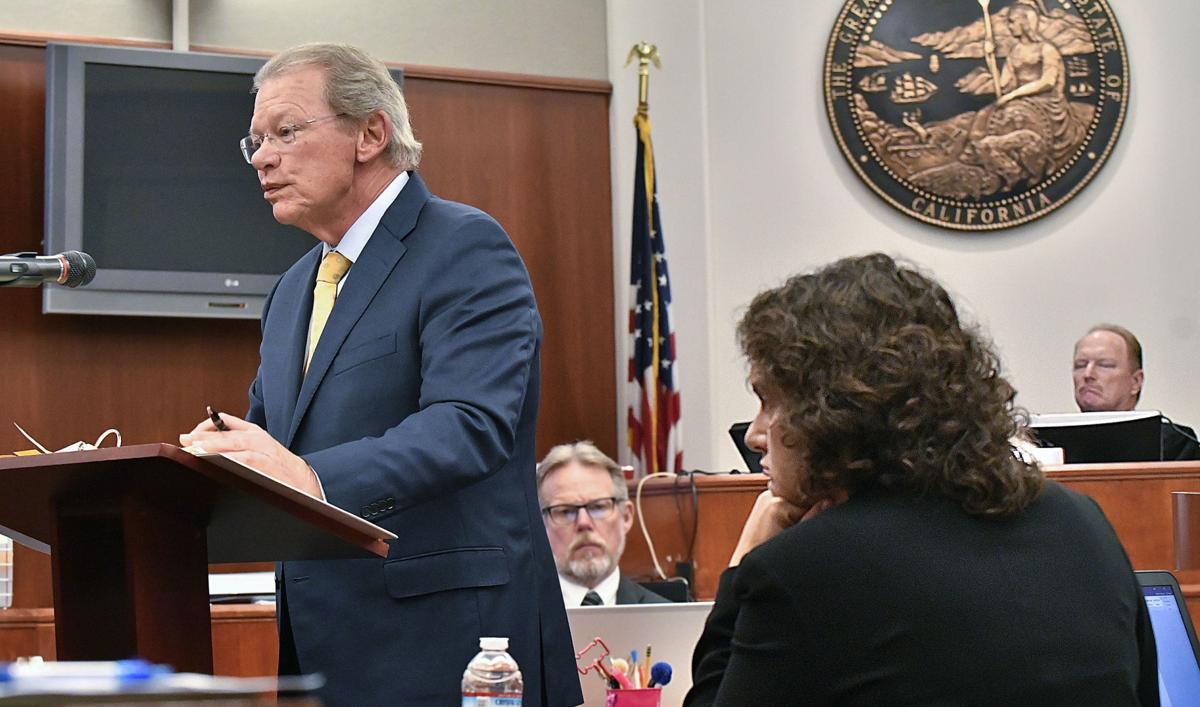 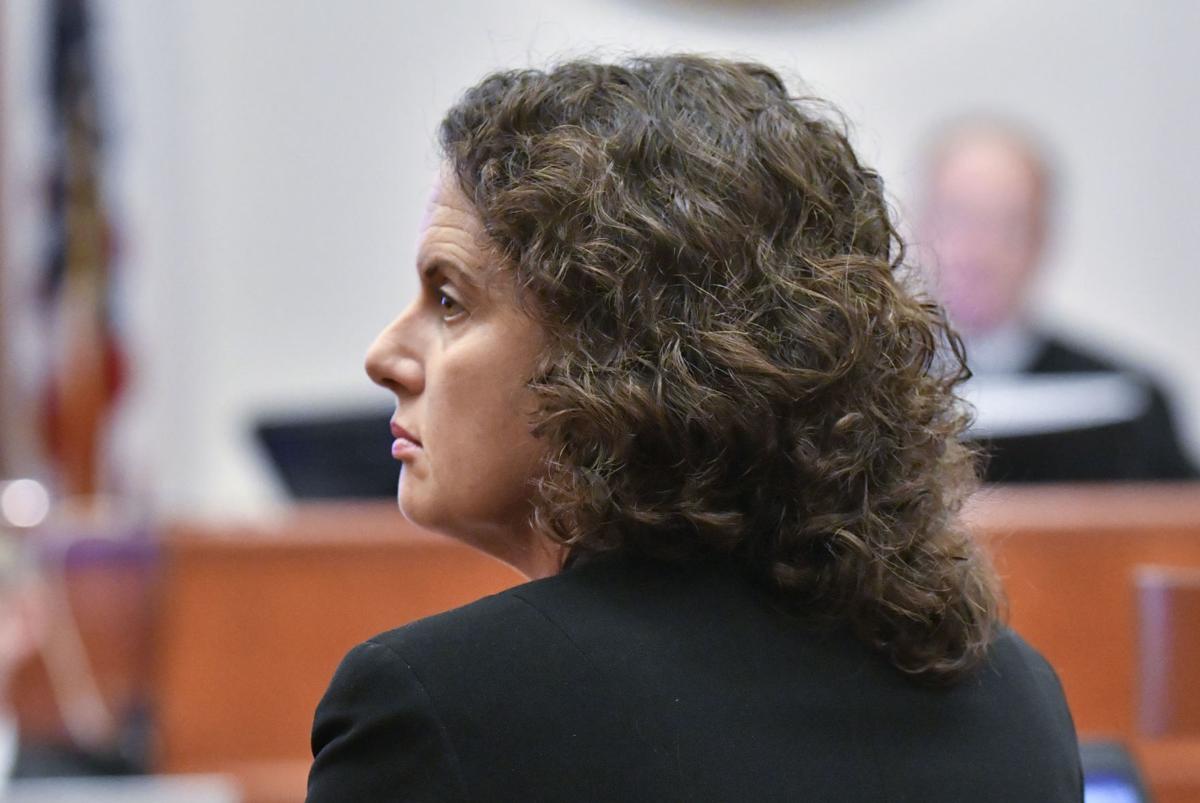 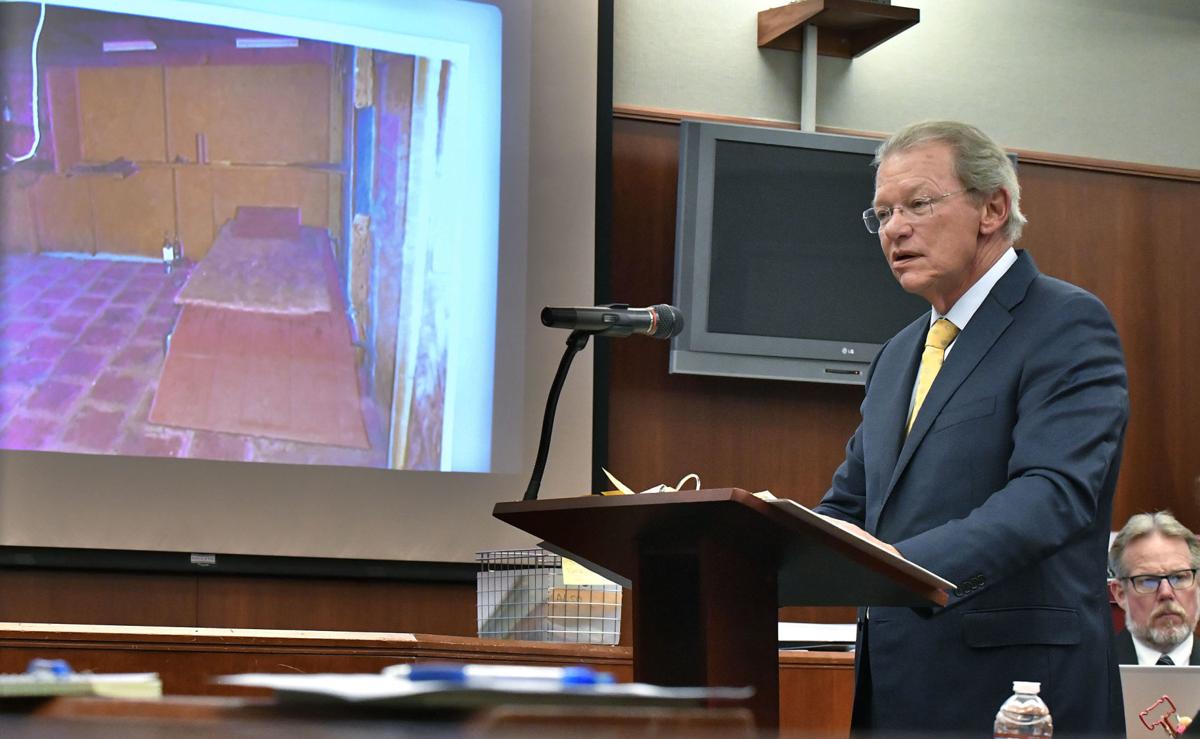 Michael Scott, representing defendant Jose Villagomez, shows a picture of the shed where his client was living the day before Marilyn Pharis was killed. 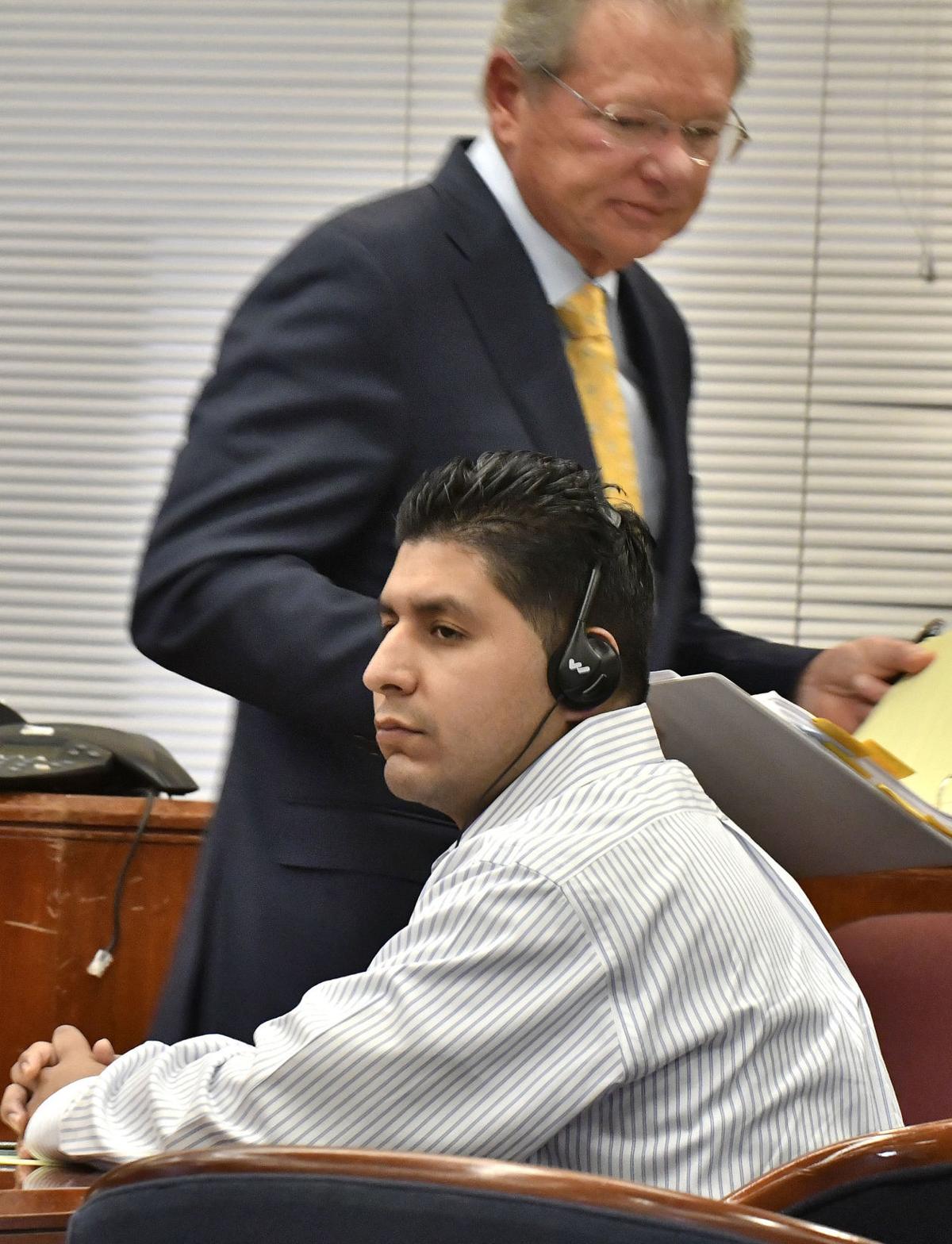 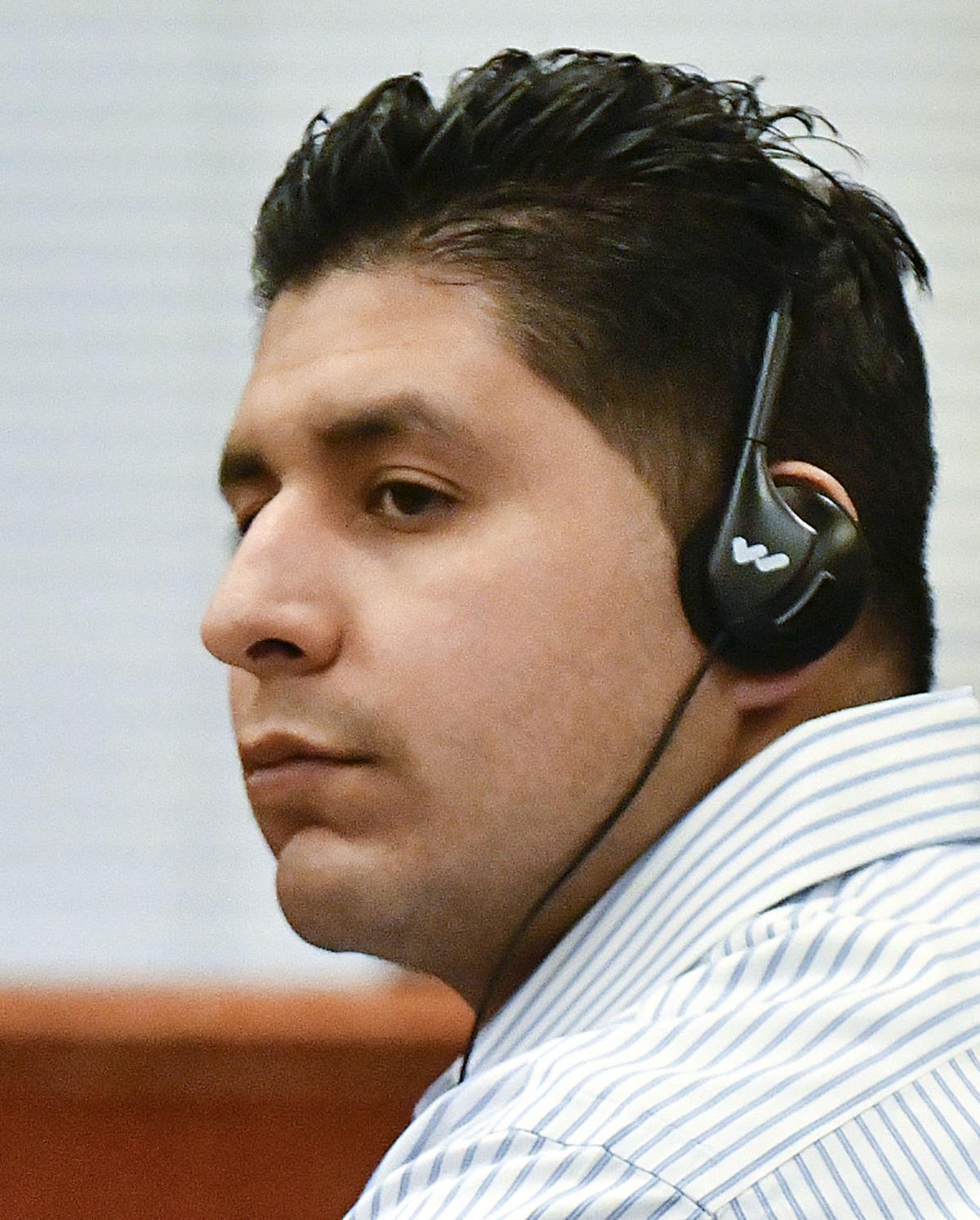 Jose Villagomez listens to opening statements via a translator on his headphones on Monday in Superior Court in Santa Maria. Villagomez is charged in the 2015 murder of Marilyn Pharis.

"Some man broke into my house," Pharis told a 911 dispatcher. "He tried to rape me. I've been beat up pretty bad."

For 10 minutes, Pharis, a 64-year-old Air Force veteran who worked nights as a satellite tracker at Vandenberg Air Force Base, remained on the line as the dispatcher worked to route a Santa Maria Police officer to her North DeJoy Street home. Earlier that morning, she was reportedly beaten, strangled and sexually assaulted by an unknown assailant.

Jose Fernando Villagomez, one of two co-defendants in the case, appeared in Judge John McGregor's Santa Maria courtroom Monday with defense attorney Michael Scott. He and Victor Martinez face first-degree murder charges with the special circumstances of murder in commission of robbery; burglary; and sexual penetration with a foreign object.

Martinez, who is also charged with a special allegation — use of a hammer — to attack Pharis, was set to appear in Santa Maria Superior Court on Tuesday afternoon for his opening arguments after the pair were granted separate juries. He is represented by Senior Deputy Public Defender Lori Pedego.

On Monday, Bramsen argued the blood clot that caused Pharis' death was the direct result of the assault by Martinez, which Villagomez willfully aided and abetted. Though Villagomez maintains he did not physically assault Pharis, Bramsen alleges that he assisted in the assault by serving as a lookout.

"Her bedroom looked out onto the front of [North] DeJoy [Street], right where the police would have been ... had they responded," she said. "Villagomez, as he knows what's going on in that closet ... looked out to see [if] the police were coming so they have time to continue and finish before they get away."

Hospitalized the morning of her alleged attack, prosecutors said Pharis was not able to walk on her own and was often bedridden. The day before her death, Bramsen said doctors scanned her leg and located a clot. Pharis was placed on medication to treat the clot but, ultimately, died after it broke off and traveled to her heart, killing her.

"She had almost a zero percent chance of developing a blood clot had she been in [normal health,]" Bramsen told the jurors. "That is a condition that developed as a direct result of bed rest, and the bed rest was a direct result of what Victor Martinez did to her with the help of Jose Villagomez."

Scott maintains Villagomez never intended to aid, abet or commit a residential burglary, robbery or assault, but simply wanted to find a place to stay. Prior to entering Pharis' home, the pair were sleeping in a nearby shed until a local contractor working on the property told them to move.

"Villagomez told detectives he assumed that it was another home being renovated because that's where he had stayed previously," Scott told the jurors. "The home looked uncared for — dead lawn, no car, closed drapes," he continued, explaining that Martinez forced entry into the home using a crowbar and Villagomez — carrying Martinez's dog — followed.

While Villagomez was transfixed by the home's various antiques and possessions, Scott maintains he did not take anything from the home. Upon hearing a noise — and in hopes of finding a restroom — Villagomez ventured upstairs where he witnessed Martinez "straddling a woman, fighting with a woman."

"Villagomez was afraid Martinez would do to him what he was doing to Pharis," Scott said. Quoting Villagomez's interviews with detectives, Scott described the scene "'like a movie,'" explaining that Villagomez was "frightened by the unexpected violence."

"He did not encourage Martinez to beat the woman up," Scott continued. "He did not help Martinez attack the woman. He froze."

According to Scott, Villagomez's behavior and actions can be explained by a cognitive defect identified by a bilingual, licensed psychologist. Described as "slow" and "not very bright," Scott said Villagomez is often confused, has difficulty grasping concepts and understanding verbal prompts.

"He was not trying to manipulate police; he's not some master criminal feigning ignorance," Scott said, casting him as the opposite of Keyser Söze, the criminal mastermind from the 1995 film "The Usual Suspects."

"Based upon testing from March of this year, Villagomez suffers from a right brain defect," he continued. "The testing indicated borderline intelligence, impaired mental flexibility, difficulty grasping concepts and mental confusion."

The prosecution and defense agreed Tuesday that Marilyn Pharis died after developing blood clots following a brutal attack in July 2015, but d…

Marilyn Pharis remained remarkably calm and composed after she was brought to the hospital, despite being severely "beaten, bloodied and stran…

Air Force veteran Marilyn Pharis wanted badly to live, and "she fought for her life" when Victor Martinez strangled her inside her home on Jul…

Victor Aureliano Martinez and Jose Fernando Villagomez are accused of beating, raping and strangling Marilyn Pharis in her home in the 900 blo…

A shooting threat made by a Tommie Kunst Junior High School student has been deemed noncredible, according to a spokesperson for the Santa Mar…

Former City Councilman and County Supervisor Thomas Blosser Urbanske, known for his work to make the Santa Maria River levee accessible for re…

Jose Villagomez listens to opening statements via a translator, left, on his headphones May 21 in Santa Maria Superior Court. Villagomez, who was charged in the 2015 murder of Marilyn Pharis, pleaded guilty Wednesday.

Michael Scott, representing defendant Jose Villagomez, shows a picture of the shed where his client was living the day before Marilyn Pharis was killed.

Jose Villagomez listens to opening statements via a translator on his headphones on Monday in Superior Court in Santa Maria. Villagomez is charged in the 2015 murder of Marilyn Pharis.