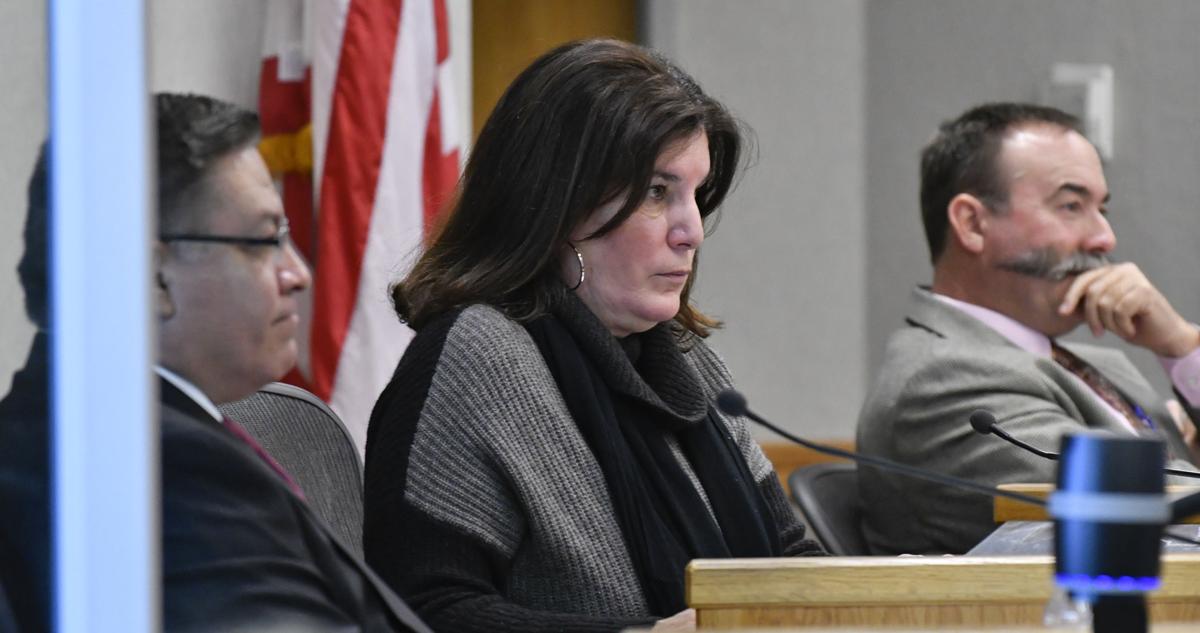 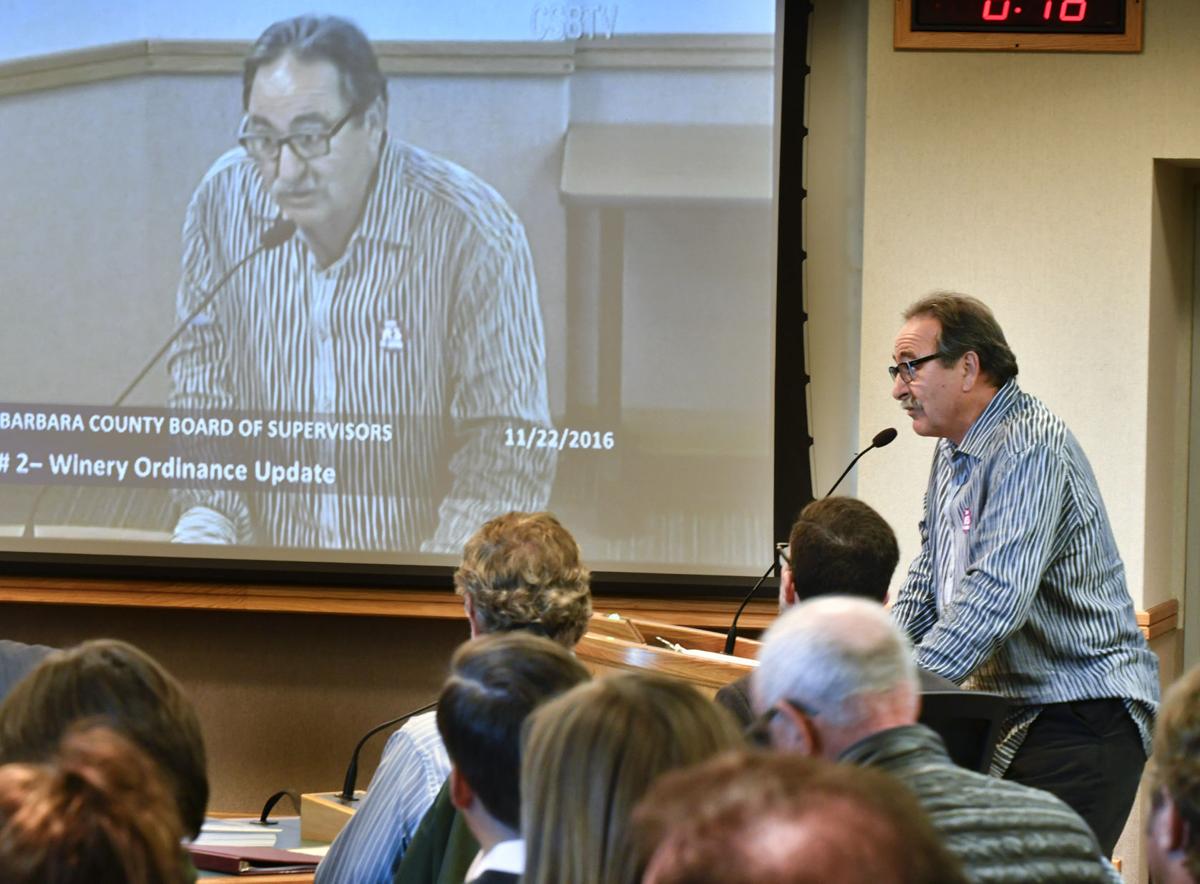 Frank Ostini, owner of the Buellton-based restaurant Hitching Post II and a winemaker, speaks against the proposed ordinance. 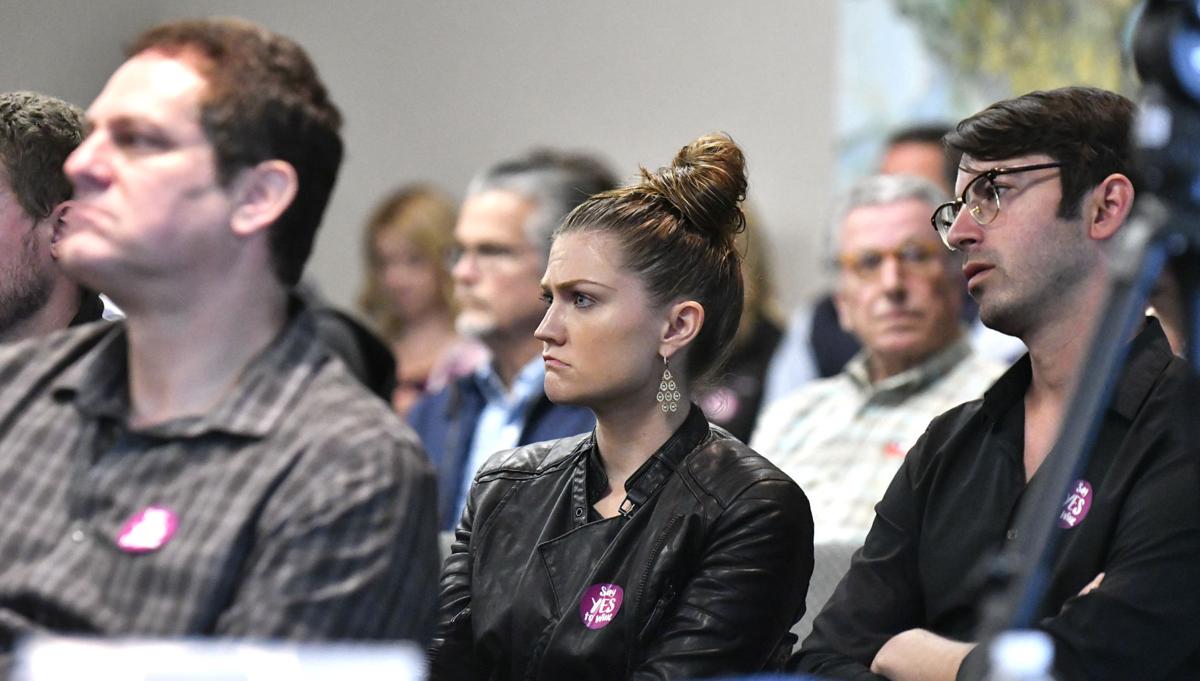 Opponents of the proposed winery ordinance listen during the Board of Supervisors hearing on Tuesday.

After more than five years in the making and more than $500,000 spent crafting updates to Santa Barbara County's winery ordinance, the Board of Supervisors decided Tuesday to stick with what's on the books.

"I can't seem to come around to supporting what my two colleagues just stipulated," said 1st District Supervisor Salud Carbajal, who was seen as the deciding vote on whether to approve the updated regulations. "It just doesn't seem like our ordinance is ready for prime time. It's OK. Government doesn't always get it right."

The board voted 4-1 to not take any action on numerous proposed changes to the county's winery ordinance, which means the status quo will remain unchanged. Third District Supervisor Doreen Farr, whose district includes the Santa Ynez Valley and much of the county's wine country, was the lone dissenter in the decision.

Second District Supervisor Janet Wolf and Farr supported moving forward with adopting the updated ordinance, which has drawn widespread criticism from those in the wine industry, as well as individuals in the tourism and hospitality industries. Carbajal didn't.

"When there's something that doesn't work right, we have to acknowledge it," Carbajal said, noting that of the 60 people who spoke at the hearing, 55 were against the proposed changes, with only five supporting the updates. "To me, that's very striking public engagement."

The board put off making a decision on the proposed changes until Tuesday's special meeting, following a public hearing earlier this month where mostly individuals from the wine industry spoke against the ordinance, as they did again during the special meeting.

"If adopted, this is the most restrictive wine ordinance of any in the U.S.," said Frank Ostini, owner of the Buellton-based restaurant Hitching Post II, who urged the board to form a task force to revise the ordinance. "Please listen to our requests or risk facing legal challenges."

Both Farr and Carbajal said they weren't comfortable with forming a task force, which would require the county to expend more money, when they won't be on the board next year to help decide where funds will be cut to fund the body.

The new ordinance required conditional-use permits for vintners to add tasting rooms and hold special events at their wineries, which were divided into three tiers.

A maximum number of visitors allowed on winery premises at any given time and the number of events were determined by a designated tier.

Those in the wine industry claim the environmental impact report for the proposed changes was skewed and inaccurate, with inflated figures for the amount of traffic and number of wineries.

County staff has received complaints from neighbors about noise, dust and traffic from operations permitted under the county's current winery operations.

Supervisor Steve Lavagnino said issues with traffic, noise and odor were simply part of living together. He wanted to see the formation of a task force to address the outstanding issues.

"I have never been one to throw good money after bad," Lavagnino said. "And I have never seen us not take the time to get something right. There are enough smart people in this room that just want to see a few tweaks."

Opponents also claimed the proposed regulations on tasting rooms would kill their ability to make wine and sell wine. Statistics show that nearly 60 percent of wine sold by estate or boutique wineries comes from direct sales.

"There's only one purpose for wine grapes," said Wes Hagen. "What else are we supposed to do with them?"

Supervisors first directed the Planning and Development Department to update the county's 2004 winery regulations in 2011. To date, the total project cost is $580,000, with $33,000 spent so far this fiscal year.

A former student accused Santa Maria High School officials of civil rights violations and trying to cover up a racially-charged April 2019 bullying incident in which he was allegedly assaulted by fellow teammates on a bus enroute to a varsity baseball game in April 2019.

As Santa Barbara County implements a health order requiring the use of face coverings, Santa Maria law enforcement officials said they will fo…

Four juveniles arrested on suspicion of burglarizing vehicles in Orcutt

Four juvenile suspects were arrested Thursday on suspicion of felony and misdemeanor theft charges after they were spotted allegedly burglarizing vehicles in an Orcutt neighborhood.

San Luis Obispo County Sheriff's officials have released the name of a Nipomo woman found dead Wednesday in a residence on Tefft Street.

Frank Ostini, owner of the Buellton-based restaurant Hitching Post II and a winemaker, speaks against the proposed ordinance.

Opponents of the proposed winery ordinance listen during the Board of Supervisors hearing on Tuesday.