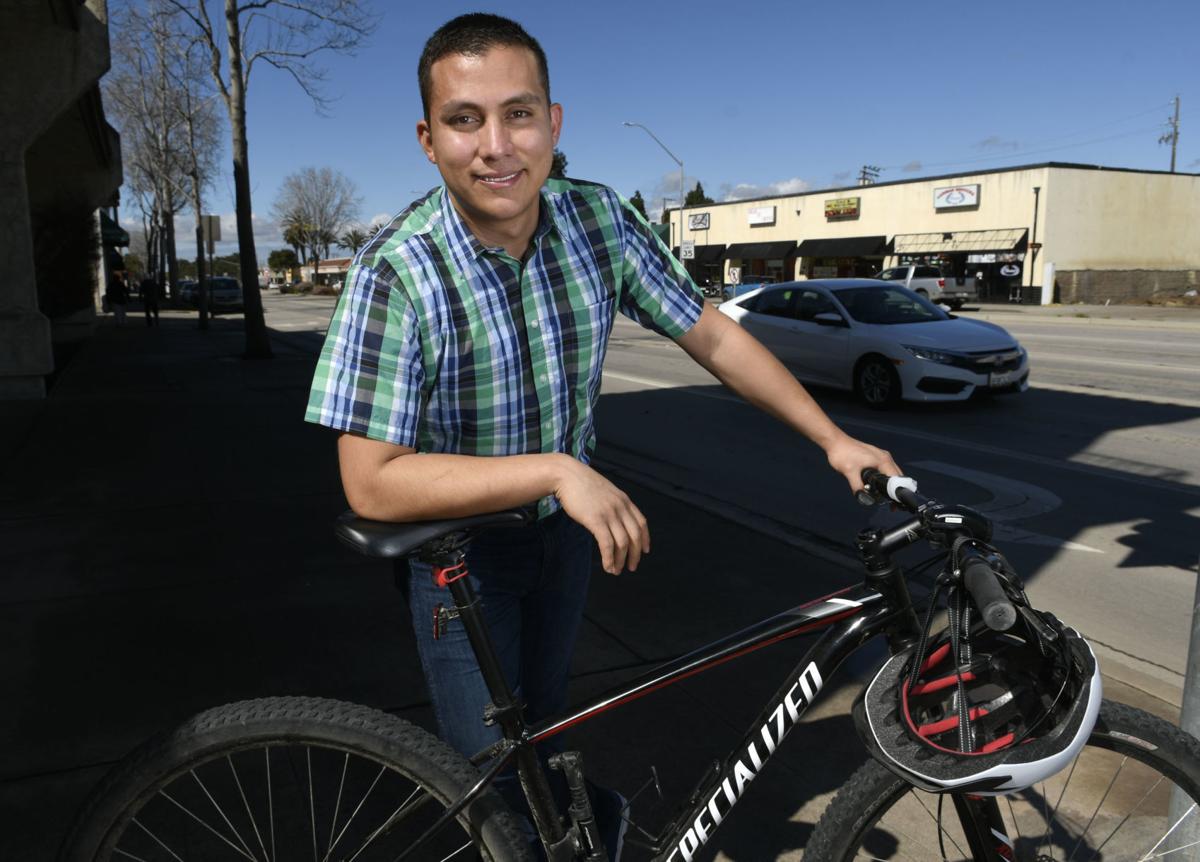 Carlos Escobedo, one of the organizers for Open Streets Santa Maria, poses at Main Street and Broadway on Thursday. During the March 31 event, Main Street will be closed from Broadway to Blosser Road. 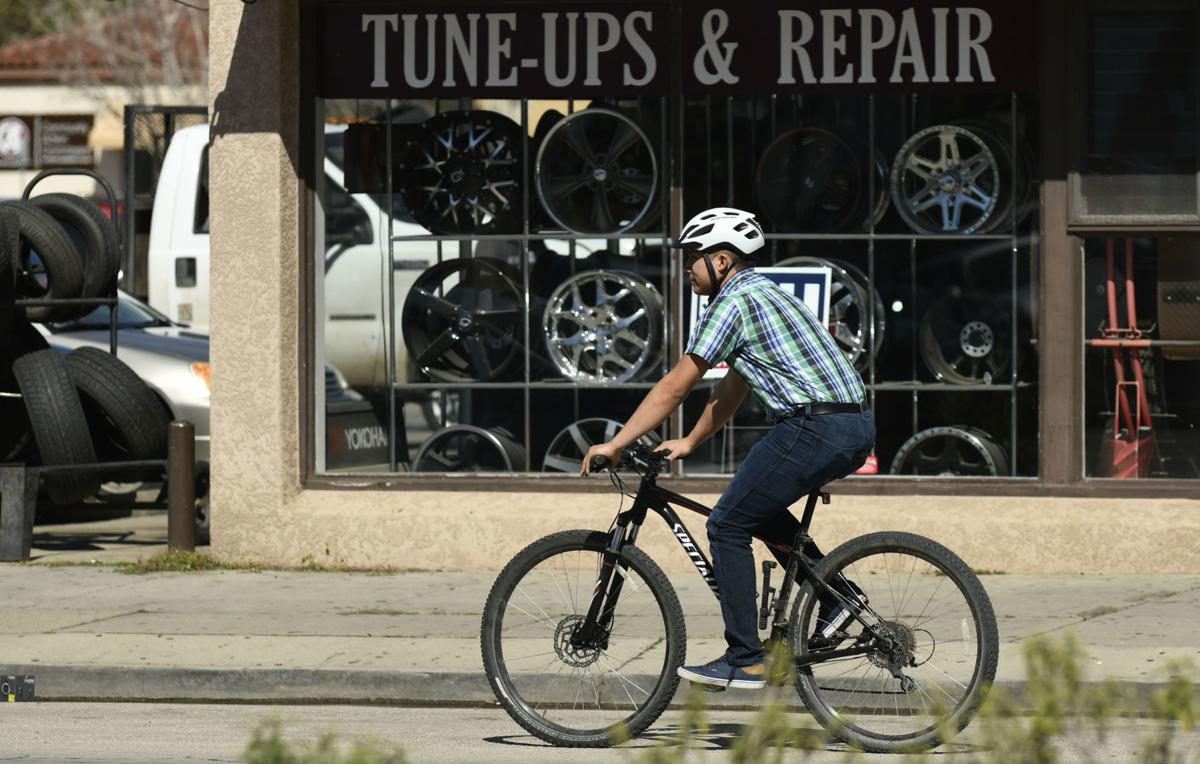 Carlos Escobedo, one of the organizers for Open Streets Santa Maria, rides on Main Street near Lincoln Street on Thursday. During the March 31 event, Main Street will be closed from Broadway to Blosser Road.

Get out your walking shoes, bikes and skates.

Preparations are underway for the first Santa Maria Open Streets event, which will close a 1-mile stretch of Main Street to vehicles, and open it for exclusive use by pedestrians, cyclists and skaters later this month.

Open Streets organizers hope residents will be inspired to explore alternative forms of transportation as they run, stroll, skate and cycle from 11 a.m. to 5 p.m. March 31 without needing to dodge cars and trucks.

Main Street will be closed from Broadway to Blosser Road for the event, which has been staged in Santa Barbara County cities including Guadalupe, Lompoc and Carpinteria.

Open Streets — also called Ciclovía, Spanish for “cycleway” — has its origin in Bogota, Colombia, where 70 miles of the city’s roads are closed to traffic every Sunday and major holiday.

Santa Maria event coordinator Carlos Escobedo, who also works as a student success outreach specialist at Hancock College, said he and others began planning for the event in January 2018 and originally hoped to hold it last fall.

“It was supposed to take place on Oct. 21 of last year but we had some issues with the permit from Caltrans,” he said. “And the city was worried about safety since they're not used to these kinds of events, so we decided to extend the date and wait until March.”

Over the course of the planning process, organizers have lined up 150 groups that will set up booths featuring an emphasis on health, social justice and bikes among other things, Escobedo said, adding that organizers hope Open Streets will acquaint community members with local businesses, nonprofits and neighbors that they might not have known about.

“We’re having a bunch of different organizations here — they provide things like legal assistance and financial assistance to the community -- and I want the community to get to know them,” Escobedo said. “I see Open Streets as the bridge or link between resources and the community.”

Yoga classes, a climbing wall, Zumba classes, a BMX show by Team Soil, a bike obstacle course, arts and crafts activities, poetry readings and live music have been lined up to take place throughout the day, said Ken Dahmen, who is also part of the organizing team.

Organizations that will be represented include CAUSE, the Santa Barbara Bicycle Coalition and officials from the Mexican Consulate in Oxnard.

To encourage participants to explore the various booths, organizers have put together a “passport” activity with the chance to win prizes.

“We’re going to be asking people to go to specific booths to get a stamp, like ‘Go to the YMCA and do this activity and get a stamp,’” Dahmen said. “Once they complete that map, they’ll give them to us and go into a raffle. We’ll be giving away passes to the YMCA and other prizes.”

Recreation and Parks Director Alex Posada said the event will be the first time in many years — and possibly ever — that a stretch of Main Street has been closed off for the use of bikes and pedestrians.

“Broadway is usually the one we close for things like the Elks Parade,” he said. “In the time I’ve been here — and that’s 30 years — I don’t remember ever closing Main Street.”

Posada said he and other city officials are happy that organizers decided to stage the event in Santa Maria.

“I think this is an opportunity for the community to look at alternatives, especially as it relates to their health and wellness,” Posada said. “It’s just made for the family — I think one of those things we really need more of is more family-focused events.”

Escobedo said his motivation for organizing Open Streets was driven in part by a desire to give back after receiving support and mentorship from a local professional upon his move to Santa Maria from Mexico three years ago.

Andrew Millar, a former clinical psychologist and financial adviser, met Escobedo at a Toastmasters event. Escobedo recalled that Millar — who died in a car crash in February 2018 — recommended him for a job as a translator for the city of Santa Maria within weeks of their meeting.

“Where I’m from — a big city — if someone tells you they’ll help you, it’s like, ‘Yeah, right,”’ he said. “You don’t expect anyone to help you. I see Open Streets as my way to give back to the community and to commemorate what he did for me, helping a stranger. My parents always taught me you have to be thankful for the people that helped you and Open Streets is my way to leave something to this wonderful city.”

Although K-12 schools in Santa Barbara County were officially permitted to reopen Oct. 13, Orcutt and several other public school districts decided against bringing back students just yet due to local COVID-19 case rates that outpace the rest of the county.

After Santa Barbara County officials impounded 104 dogs from a Lompoc home Thursday, animal services agencies across multiple counties offered to take in the pack of mainly Chihuahuas and prepare them for adoption into loving homes.

With scares popping up at every turn and spooky sounds setting the scene, the Haunted Hills drive-through experience at the Elks Unocal Event …

An Atascadero State Hospital police officer was arrested Monday on suspicion of weapons and narcotics charges following an investigation, according to a Santa Barbara County Sheriff's spokeswoman.

Oct. 31 was a “dark and stormy night” 24 years ago when Wayne Steller popped the question to girlfriend Wendy at “a big Halloween dance,” and …

While driving through, attendees will experience spooky sounds and fear-inducing sights that are not for the faint of heart.

Two months after the official start of the school year in August, freshmen at St. Joseph High School in Orcutt saw their campus for the first …

Murder charges against a Santa Barbara man accused in the deaths of a Solvang mother and her two children in a fiery car wreck on Highway 154 were upheld following a two-day preliminary hearing examination last week.

Carlos Escobedo, one of the organizers for Open Streets Santa Maria, poses at Main Street and Broadway on Thursday. During the March 31 event, Main Street will be closed from Broadway to Blosser Road.

Carlos Escobedo, one of the organizers for Open Streets Santa Maria, rides on Main Street near Lincoln Street on Thursday. During the March 31 event, Main Street will be closed from Broadway to Blosser Road.