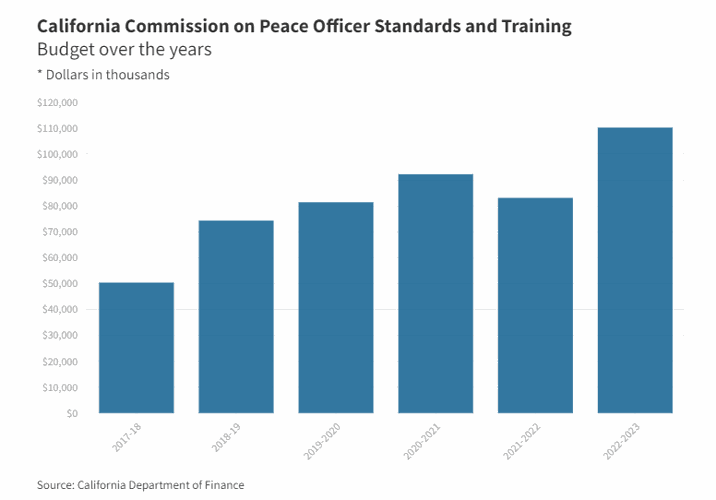 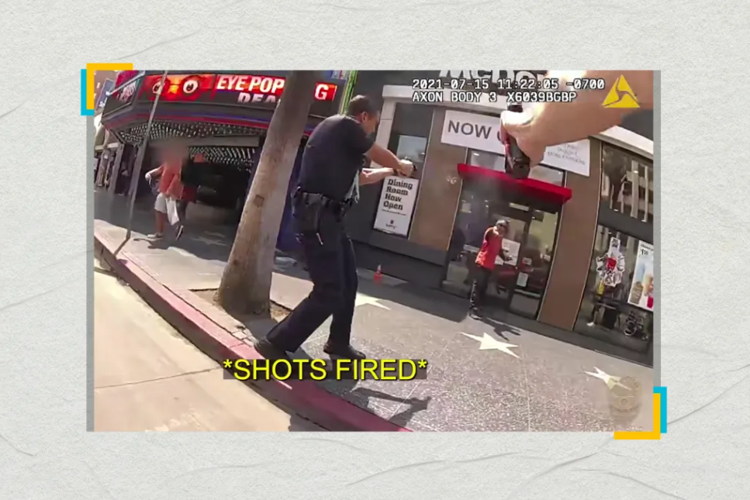 Body camera footage released by the Los Angeles Police Department of the shooting of Matthew Sova on July 15, 2021. Screenshot via YouTube

California Department of Justice agents realized they were short-handed just hours after a Los Angeles police officer shot and killed an unarmed man on Hollywood Boulevard.

A 911 caller told police the man was threatening people on the morning of July 15, 2021, waving what appeared to be a pistol in a busy tourist pocket. The object in his hand turned out to be a lighter with a pistol grip.

The fatal shooting was the first test of a law requiring the Justice Department to investigate police shootings of unarmed civilians. The agents would need to interview witnesses, mark evidence and canvass nearby businesses for surveillance footage, according to documents detailing the state’s response.

Even so, justice officials would later say, it wasn’t enough — calling their deployment “inadequate.”

“There were dozens of tasks and assignments that the … special agents could not accomplish because of limited staffing,” the department wrote in a budget request submitted to the Legislature in January.

For decades, police oversight in California began and ended within a local department. Rarely did the state step in.

That has changed. After unarmed Stephon Clark was shot and killed by Sacramento police officers in 2018, state lawmakers began taking a more active role in police accountability, passing several statewide mandates aimed at improving policing in California. Since then, they’ve tapped both the Department of Justice and California Commission on Peace Officer Standards and Training (POST) for new duties.

But ambitious deadlines, new job responsibilities and delayed funding are testing the limits of both agencies, officials say.

California’s Commission on Peace Officer Standards and Training missed its deadline this year to get police departments up to speed on newly-required bias screening for police applicants. The commission has also been given new authority to decertify police officers, a responsibility that is reshaping the previously low-profile commission.

Both agencies were redirected by legislation. For the Justice Department, its new role came with Assembly Bill 1506, which mandates that its agents investigate each officer-involved shooting of an unarmed civilian. Beginning next year, upon request of a law enforcement agency, the state is also supposed to begin reviewing the local agency’s use of force policy and make recommendations.

The long shadow of George Floyd

When the Gov. Gavin Newsom signed the officer-involved shooting bill in September 2020 — four months after the murder of George Floyd by Minneapolis police — it was a politically important piece of legislation to the governor and to then Attorney General Xavier Becerra. Current Attorney General Rob Bonta also supported the plan while still in the Legislature.

But months before the law went into effect on July 1, warning signs went up internally at the Justice Department.

“Additional burdens are increasingly being placed on the very limited staff of the (Bureau of Investigation) and (Bureau of Forensic Services),” one Justice Department employee wrote to the Attorney General in April 2021, according to redacted emails obtained by CalMatters.

“We are already stretched incredibly thin.”

The Justice Department asked for $26 million to pay for the new shooting investigation teams. The Legislature allotted half of that, about $13 million.

Becerra complained about that discrepancy to the bill’s author, Democrat Assemblymember Kevin McCarty of Sacramento.

The $13 million budget allocation “is significantly lower than our estimates and not enough resources to stand up professional teams to perform these new investigative and prosecutorial duties,” Becerra wrote to McCarty in January 2021. “As a result, the DOJ will have limited capacity to implement this bill, short of redirecting resources from other essential, mandated work, which could compromise those operations.”

McCarty recently told CalMatters that the Justice Department should be able to find a way to fund the program.

“The Department of Justice is a multi-billion dollar agency,” McCarty said. “They have lots of other funding sources to pay for it, and we can settle up afterward.”

When reminded of the 2021 letter he received from Becerra asking for more money, McCarty was still skeptical.

“That’s ridiculous. That’s why we passed on (adding more money to the DOJ budget),” he said. “As opposed to these hypotheticals, why don’t you do the work for a year and see how much money it actually costs?”

Since 2016, police officers have shot and killed an average of 140 people in California each year. Of the people killed, about 20 are unarmed, 10  have a replica firearm and another 10 have objects that may not qualify as deadly weapons.

That amounts to about 40 shooting investigations of unarmed civilians each year.

The latest shooting took place July 15, 2022, in Anaheim, exactly one year after the first shooting investigated in Los Angeles by the Justice Department.

Dividing the $13 million budget by the number of open investigations – 21 – the cost of each investigation so far would average $619,000, an amount McCarty said is “enough to do the work.”

The department had 5,008 employees in June, according to the Controller’s Office. The Department of Justice declined to provide the number of employees in each job category, including those who would be assigned to officer-involved shooting investigations.

“Implementing AB 1506 has absolutely imposed new demands on the entire California Department of Justice and the entire office has, as necessary, adjusted admirably to the new responsibilities,” a department spokesperson wrote in an email to CalMatters.

California’s Commission on Peace Officer Standards and Training has had similar challenges.

In the past five years, many state directives aimed at improving police operations in California landed before the commission. The relatively small agency, with about 120 employees, is known for training and certifying police officers — but that job description is quickly expanding, often under tight deadlines.

For instance, in late 2020, legislators passed Assembly Bill 846, forcing police agencies to screen for bias during a potential officer’s psychological evaluation. The commission was tasked with creating bias screening materials by Jan. 1, 2022.

They missed the deadline. (In a strange twist, a legislative clerical error inadvertently wiped the bias screening mandate from the law, though that is being remedied.)

“A year seems like a long time, but it’s not when it comes to regulations,” said Melani Singley of POST, who manages all regulations and guidance for police officers. “The timeline makes it challenging to develop something that is going to meet the intent of the law.”

In May 2022, the agency’s final changes were approved by its oversight commission. Now, as the Legislature rushes to reinstate the bias screening mandate, the commission is expecting the regulation to go into effect by Aug. 1.

Other new duties are piling up. For years, the commission averaged a few legislative bills a year. Nowadays, said POST executive director Manny Alvarez, “we’re tackling a lot more now than ever before.”

Between 2015 and 2020, lawmakers introduced roughly nine officer training bills a year, almost double the average between 2010 and 2014, according to a study by the Little Hoover Commission, an independent state oversight agency.

“It’s a lot of work for a small number of people,” said Singley.

But soon the commission will be larger.

With a new directive giving the commission authority to decertify police officers, which was enacted by Senate Bill 2, the agency is expected to nearly double in size over the next six months after receiving a roughly 32% funding increase earlier this month.

In just a few months, the agency that almost exclusively dealt with police will interact with the public as well, as citizens and police departments make their cases regarding alleged bad officers. The commission will investigate officers accused of serious misconduct and recommend if an officer should be decertified.

Several states, including Mississippi, Alabama and Montana, already have decertification processes in place.

Is the commission overloaded?

While police decertification is one of the most significant changes the commission has undergone, some are raising concerns about whether the state is overloading the agency, which is overseen by a board that meets a few times a year.

In a report addressed to the governor and the Legislature, the Little Hoover Commission recommended lawmakers “temporarily refrain” from mandating new training requirements.

“…there is little evidence to demonstrate which types of training actually achieve intended goals and positively impact police behavior — and which do not,” wrote Pedro Nava, chairperson for the Little Hoover Commission.

State analysts also are concerned the small organization will not be able to make such a drastic shift as quickly and efficiently as the Legislature may expect.

“POST will likely face significant challenges implementing SB 2, primarily due to the fact that the commission’s staffing will need to roughly double by January 1, 2023 — only six months after receiving funding in the budget…” wrote the Legislative Analysts Office in a report earlier this year.

Meanwhile, several commission workers told CalMatters they are still cautiously optimistic they will make their deadline on instituting the first police decertification process in California history.

“One of the big unknowns to us is the volume of data and the volume of reviews and investigations there will be,” Alvarez said. “We’ve never collected that type of data.”

This story was originally published by CalMatters.  You can read more of their coverage of California state government on CalMatters.org