The city of Solvang will not enforce the latest three-week business closure mandated by the state of California and is encouraging businesses to carry on with open doors and dining just as they have throughout the summer and fall.

“As of tonight, they can go about their business as they had done this weekend,” said Councilman Daniel Johnson.

The decision was made at an emergency meeting held Monday, during which Solvang City Council members voted unanimously to add discussion of the state mandate and their response to the agenda. They then unanimously agreed to:

“The city of Solvang will not actively enforce county and state orders, and that the city requests the county to prioritize education and that they also not enforce the orders within the city limits,” a city press release stated Tuesday morning.

Council members and city staff discussed the potential for complying with state and county mandates by reclassifying outdoor dining seating from restaurant seating to public space or other measures which would allow restaurants to continue serving patrons.

“If we think we’ve had problems with (transient occupancy tax), etcetera, the layoffs we’ve had and trying to bring back employees, let’s go for another round of this and see what happens. It’s going to be dismal,” he continued.

During public comment, Solvang Chamber of Commerce Executive Director Tracy Beard and one other member of the public urged the council to take action.

“We have had half a million people come through Solvang over the summer. We have less than 300 cases. We must be doing something right in this town. I don’t understand why we’re not open and we're not saying we’re open for business and this is going to be a problem when it comes tax time,” Beard said.

Council members noted other cities in the region, including San Luis Obispo, have requested removal from the Southern California region and noted their ICU bed capacity remains high.

“The fact we’re lumped in with Southern California makes absolutely no sense. There’s just no reason we should be lumped in with Los Angeles. This town has been packed in since May. Maybe we need to rename all our restaurants French Laundry and that’ll be OK or something. I’m (speaking) tongue in cheek, but, gee, this makes no sense at all,” Clarke said. 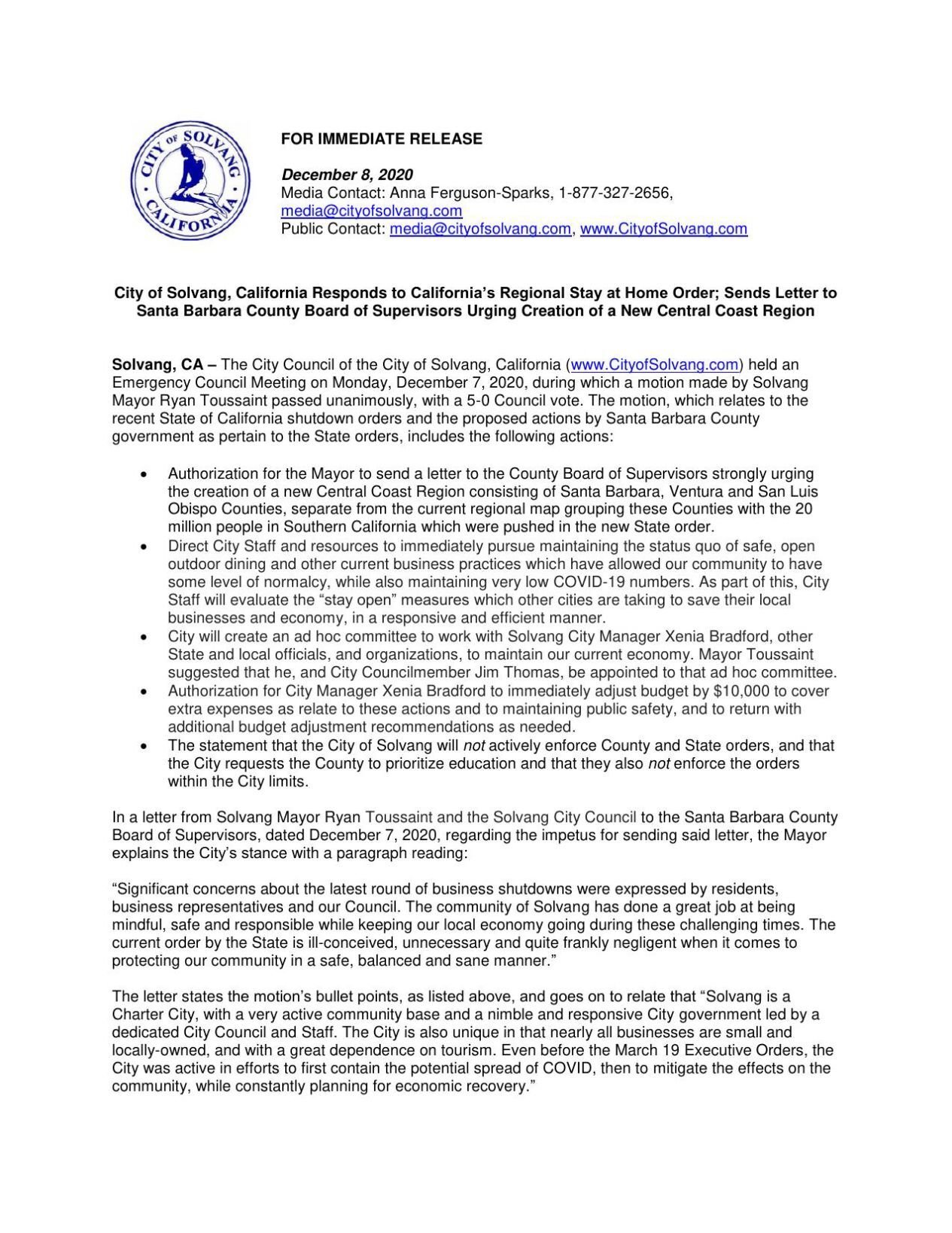 Santa Barbara County Board of Supervisors voted unanimously Dec. 8 to send a letter to the governor asking for the Tri-Counties area to be sep…