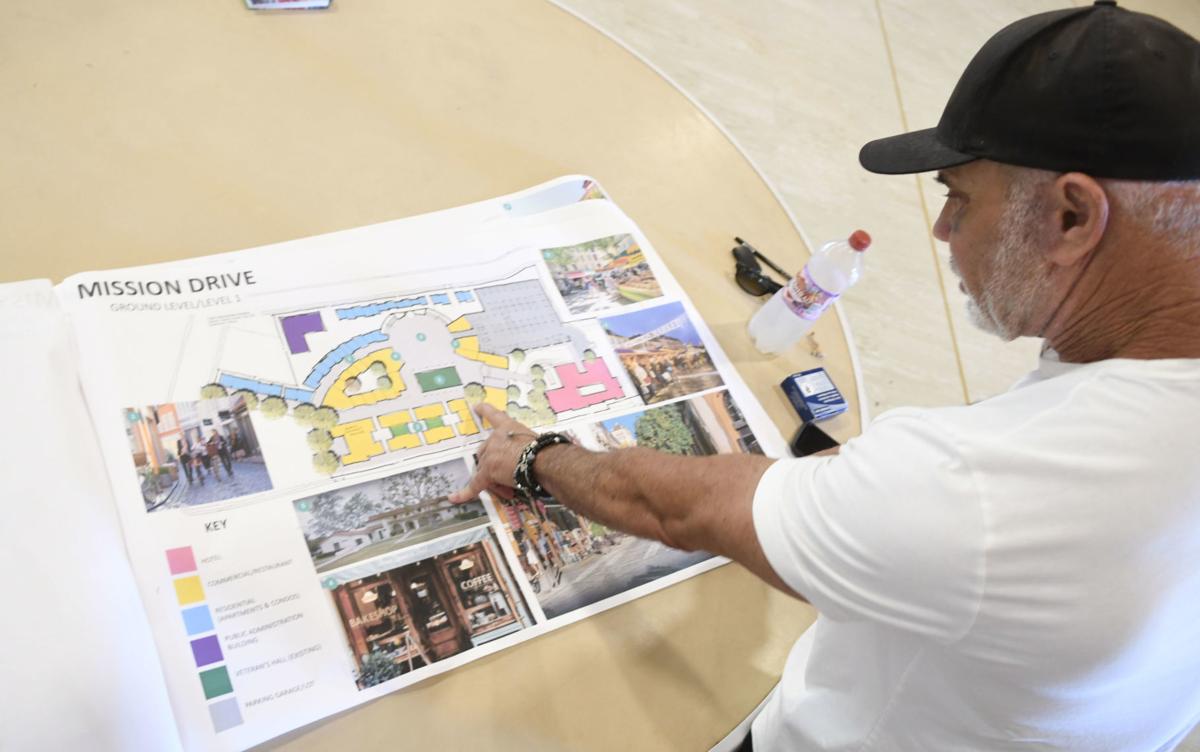 Ed St. George, shown at the Solvang Veterans Hall in June, proposed a blended-use development project in the downtown area, which was scrapped in September. The city now is seeking to enter into a development agreement for the construction of a hotel with a wellness center. 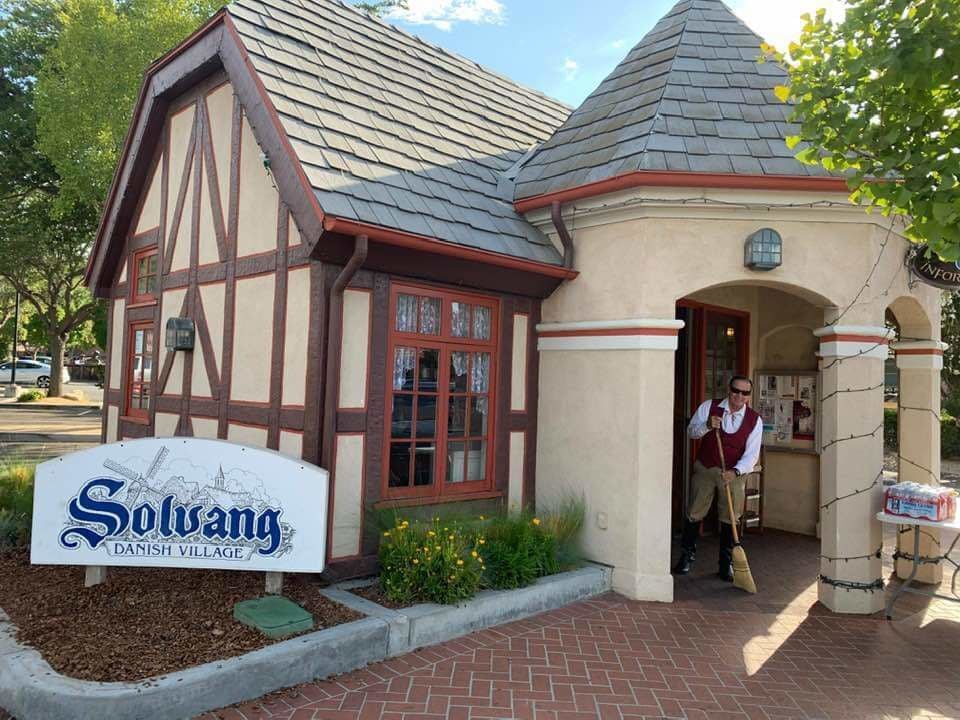 Jim Ball sweeps out the front of the Solvang Visitor's Center after he and his wife, of Brenda's Creative Visual Solutions, were contracted in 2019 by the city to manage the facility on Copenhagen Drive. The City Council on Oct. 12 approved an $81,000 contract with Central Coast Marketing for management and operation of the center through June 2021.

The Solvang City Council approved a full docket of items during its Oct. 12 meeting that included replacing a member of the newly formed Branding and Design Committee, approving a $598,000 contract for general plan update consultancy, approving a $81,000 contract for visitor center staffing and directing staff to design a development agreement for a new hotel.

In August, the council established Solvang’s Branding and Design Committee and appointed its first five members to serve until Dec. 31. At its first meeting, members appointed Rene Kaerskov their chair. On Oct. 1, he resigned from the committee.

Most council members supported filling the vacancy with Zackary Ulrick, the sixth-place vote getter during in the initial selection process. Should he decline, the city will tap the next runner-up, Julie Paladino, and continue down the list until all the original applicants are exhausted.

Councilman Daniel Johnson said he was “fine with whatever.”

“I had someone else in mind, but if you’re afraid to take the hard votes, fine, just default to the next person. I don't have a problem arguing on these things, debating these things and voting on these things. I’m just sad that we didn’t do that. So if you want to take the easy way out, go ahead,” Djernaes said before joining the 5-0 decision.

The council also voted unanimously to enter into the nearly $600,000 contract with Mintier Harnish Planning Consultants to provide the city’s first general plan comprehensive update in the city’s 35-year history.

City Manager Xenia Bradford said the plan will “address the long-term vision for the city of Solvang for the next 20 years,” and that it would align with major infrastructure needs for public works such as water, wastewater and roads. The anticipated 1.5-year process also aligns with the city’s two-year budget cycle.

The initial proposal, which included removing the Solvang Veteran’s Hall and relocating the library, senior center and county offices to make room for housing and a hotel, was met in June with “monolithic community opposition,” Gorin said.

That plan was replaced by a high-density housing project that would include 59 units in a 47-foot-tall structure. Under Senate Bill 330, the Housing Crisis Act of 2019, local jurisdictions would be restricted “from having regulations that can act to delay or inhibit production of housing,” Gorin said.

By including five very-low-income units, the project would be eligible for two concessions. St. George opted to seek height and parking concessions, allowing the 47-foot, four-story structure and half a parking space for each bedroom in the project rather than two spaces per unit.

While the housing project remains in the pipeline, St. George and Gorin said they continue entertaining a hotel development with wellness center for the property. The 47-foot-tall, three-story concept was presented in both the initial Danish as well as a newly developed Spanish styles.

“Our preference is the hotel. We think it’s a better project overall,” Gorin said.

St. George and Gorin estimated the city could reap $10,000 to $15,000 per year in property taxes from the housing project or at least $1 million per year in transient occupancy and related taxes with the hotel development.

The council directed staff to pursue a development agreement that would provide St. George assurances the next council cannot change its mind midproject. The project would still have to go through the city’s complete planning and review process during which public input would be sought, but the agreement allows the project to move forward in short order rather than wait for a lengthy rezoning effort.

“It’s about the future, about doing the right thing, but at the end of the day the check’s gotta clear,” said Mayor Ryan Toussaint.

In other action, the council:

— Unanimously approved the Copenhagen Closure Design Guidelines and Implementation Plan as proposed by the city’s Branding and Design Committee to the tune of $27,000. The plan, which continues access to city parking lot 2 as is, includes interest-free loans of up to $3,000 to Copenhagen Drive businesses to purchase matching umbrellas, black furniture, and decorative-yet-functional planter bollards. The city also will install ambiance lighting zigzagging across the street. Items not allowed by the plan include colorful plastic furniture, tents, parklets and plastic buckets.

— Unanimously approved an $81,200 contract with Central Coast Marketing for management and operation of Solvang Visitor’s Center through June 2021. The center will be staffed from 10 a.m. to 5 p.m. Fridays through Mondays and double-staffed on holidays and two weeks in December.

—  Took under advisement an initial, citywide branding proposal by Kaerskov focusing on Solvang as the “best themed town in the U.S. today” with an emphasis on tourism and tweaking businesses and events “to Danish it.” The city plans to seek residents’ input as it “dovetails” the branding effort with the Design Element of the newly reforming general plan, Bradford said.

Singer Pink performs during Rally for Inclusion at Solvang Park

The Santa Ynez Band of Chumash Indians presented a ceremonial blessings, and local resident and songstress "Pink", who also attended the event, sang out into the large crowd comprised of mask-wearing families and friends.

Ed St. George, shown at the Solvang Veterans Hall in June, proposed a blended-use development project in the downtown area, which was scrapped in September. The city now is seeking to enter into a development agreement for the construction of a hotel with a wellness center.

Jim Ball sweeps out the front of the Solvang Visitor's Center after he and his wife, of Brenda's Creative Visual Solutions, were contracted in 2019 by the city to manage the facility on Copenhagen Drive. The City Council on Oct. 12 approved an $81,000 contract with Central Coast Marketing for management and operation of the center through June 2021.