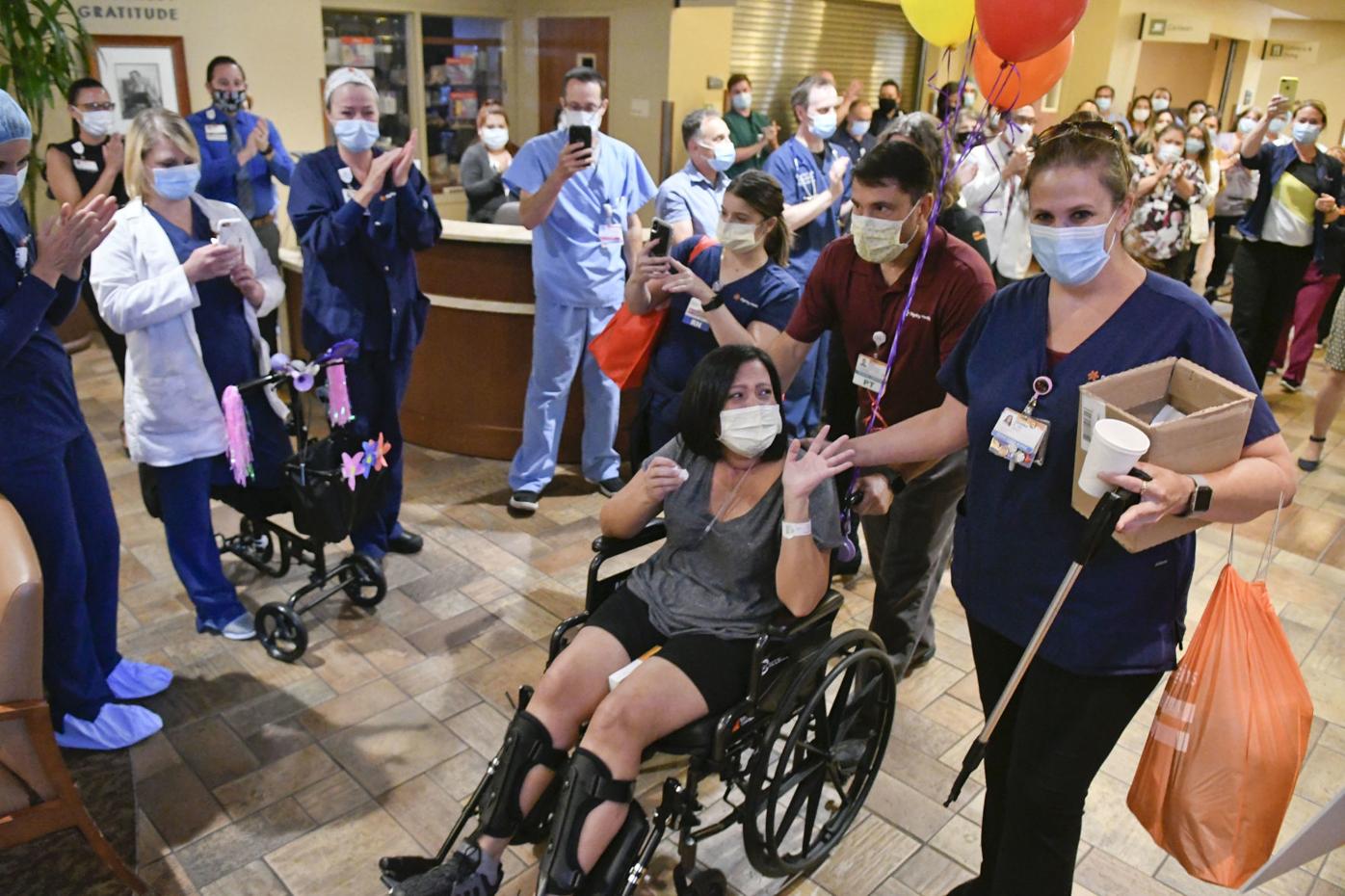 COVID-19 survivor Melissa Meza leaves Marian Regional Medical Center on Thursday to the cheers of staff and her husband, Louis, who is also a coronavirus survivor. 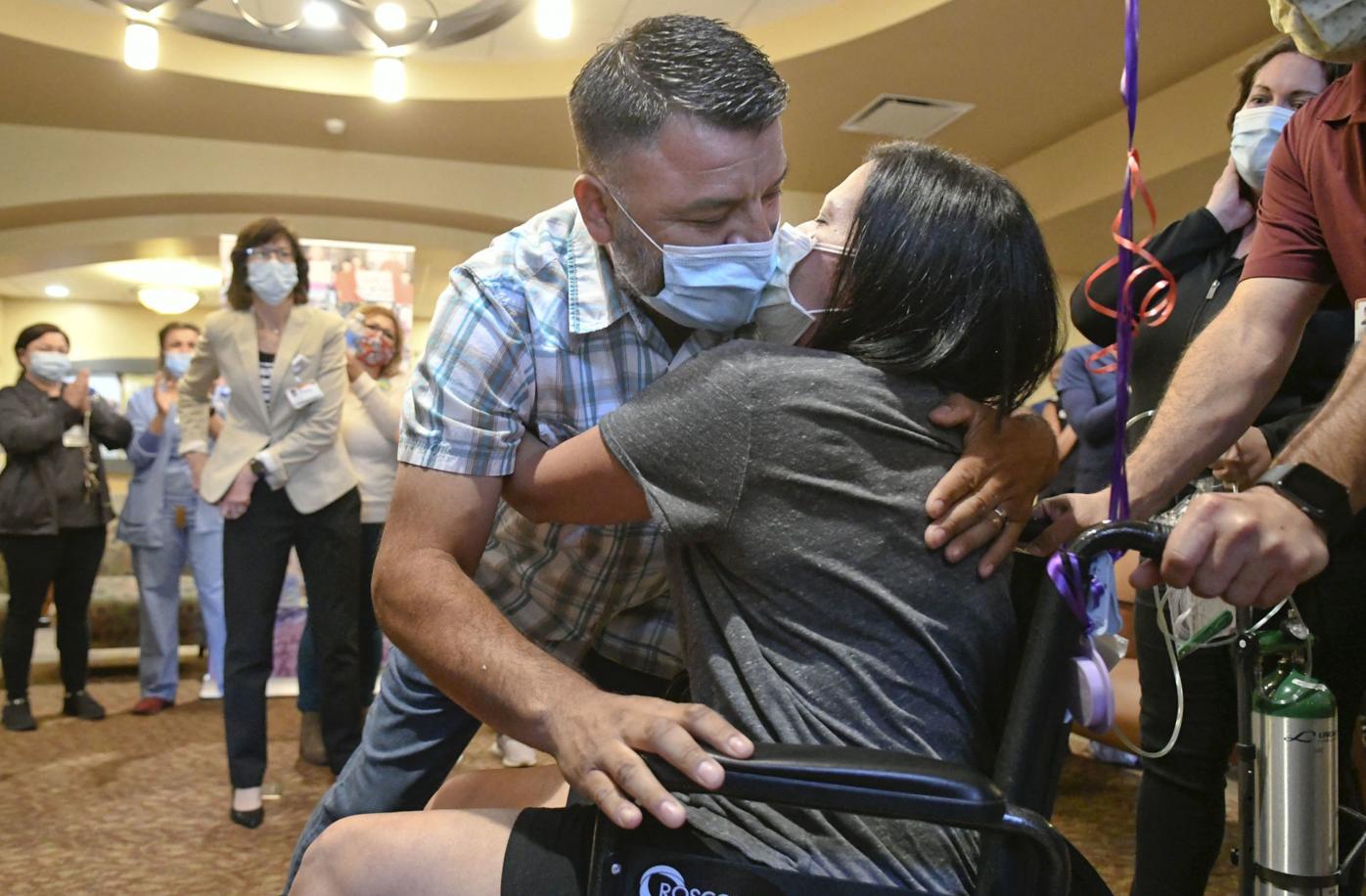 COVID-19 survivor Louis Meza hugs his wife, Melissa, as she leaves Marian Regional Medical Center on Thursday after spending 60 days in the hospital fighting the coronavirus. As the medical staff cheered, Louis kneeled and presented Melissa with her wedding ring upon their departure.

COVID-19 survivor Melissa Meza leaves Marian Regional Medical Center on Thursday to the cheers of staff and her husband, Louis, who is also a coronavirus survivor.

COVID-19 survivor Louis Meza hugs his wife, Melissa, as she leaves Marian Regional Medical Center on Thursday after spending 60 days in the hospital fighting the coronavirus. As the medical staff cheered, Louis kneeled and presented Melissa with her wedding ring upon their departure.

As doctors pushed Melissa Meza's wheelchair down the hallway of Marian Regional Medical Center on Thursday, she was met with the cheers of over 100 doctors, family members and friends celebrating the next big step in her COVID-19 recovery: her return home.

When she reached her husband, Louis, at the entrance to the hospital, he returned a special item she had gone without during her 60 days in the hospital — her wedding ring.

"She's gotta be married again," Louis said with a laugh.

Melissa, 43, was admitted to Marian on March 29 with severe COVID-19 complications, undergoing various treatments and an emergency transfer to a Santa Monica hospital over the next two months.

Through the days when her survival was uncertain and the days she made miraculous improvements, Louis remained by her side, talking with her over FaceTime with the help of doctors until he was able to visit her in person.

"We’ve been talking about everything she went through. I told her, 'I never said goodbye.' It was always, 'I’ll see you soon,'" said Louis, 47.

'I pray all day long': Louis Meza hoping for recovery of wife, fighting COVID-19 in the ICU

Nearly a month after noticing COVID-19 symptoms and two weeks after leaving the hospital himself, Louis Meza is still locked in a battle with the virus, but this time it's his wife he's supporting as she fights for her life.

Louis himself was hospitalized with the virus in late March and endured a long recovery at home while Melissa remained in the hospital.

While quarantined at home, Louis decided to share his family's story through Facebook videos. He went on to reach thousands of people who were impacted by his experience, both in Santa Maria and across the country.

"Our family would hate for someone else to go through this," he said. "We have to keep getting the word out."

As Melissa was guided out to her car where her son and extended family were waiting, doctors and nurses alike were in tears.

"She had a big impact. We all really cared about her a lot," said registered nurse Lauren Bedell.

Dr. Zachariah Reagle, an ICU doctor who worked closely with Melissa during her time at Marian, said her recovery has been incredible.

"It's pretty unbelievable when you think about where her vital signs were, the kinds of support she required ... to make any kind of recovery at all is very impressive," Reagle said.

Melissa has been gradually gaining back the ability to speak and walk on her own through physical therapy. She still has a long road to recovery, Louis said, and will need to continue therapy at home.

Although medical bills are mounting and unknowns remain, Louis said he is relieved and grateful: "The important thing is that she's coming home."