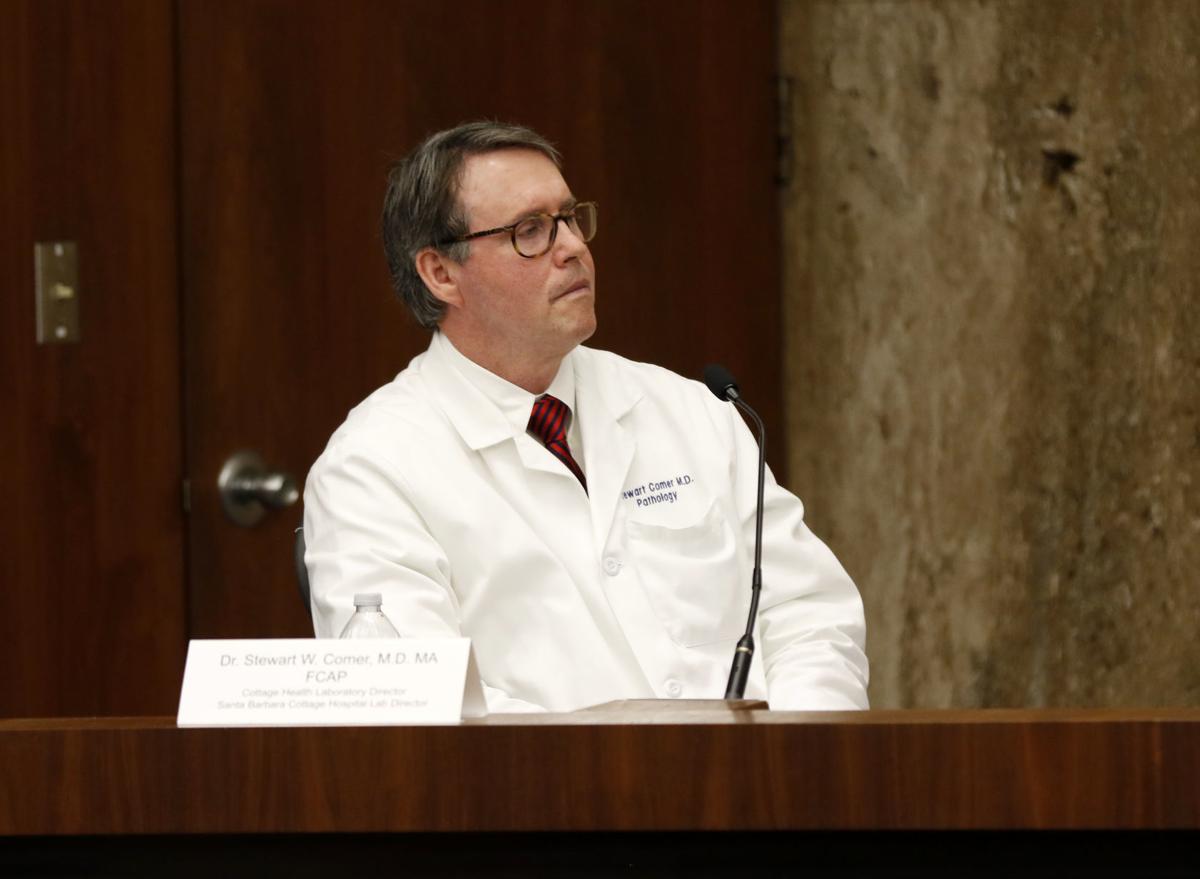 Dr. Stewart Comer speaks during a press conference in Santa Barbara, where he updated the community on the coronavirus Monday. 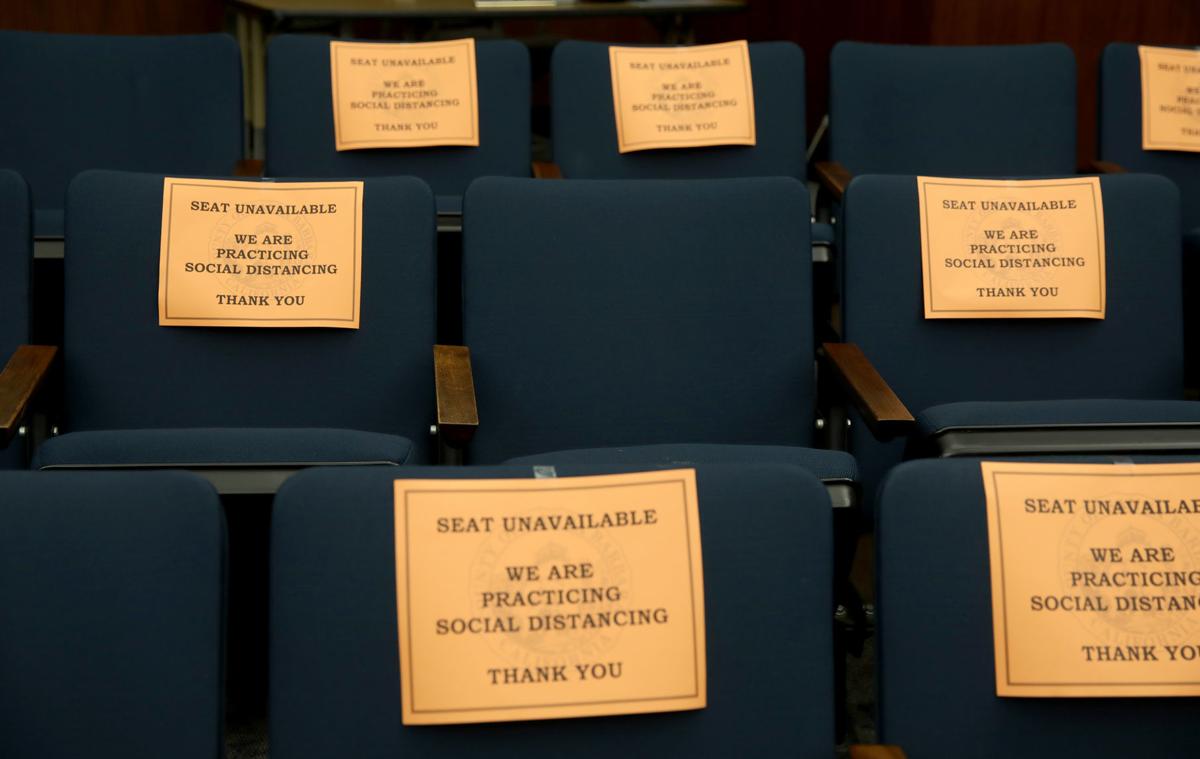 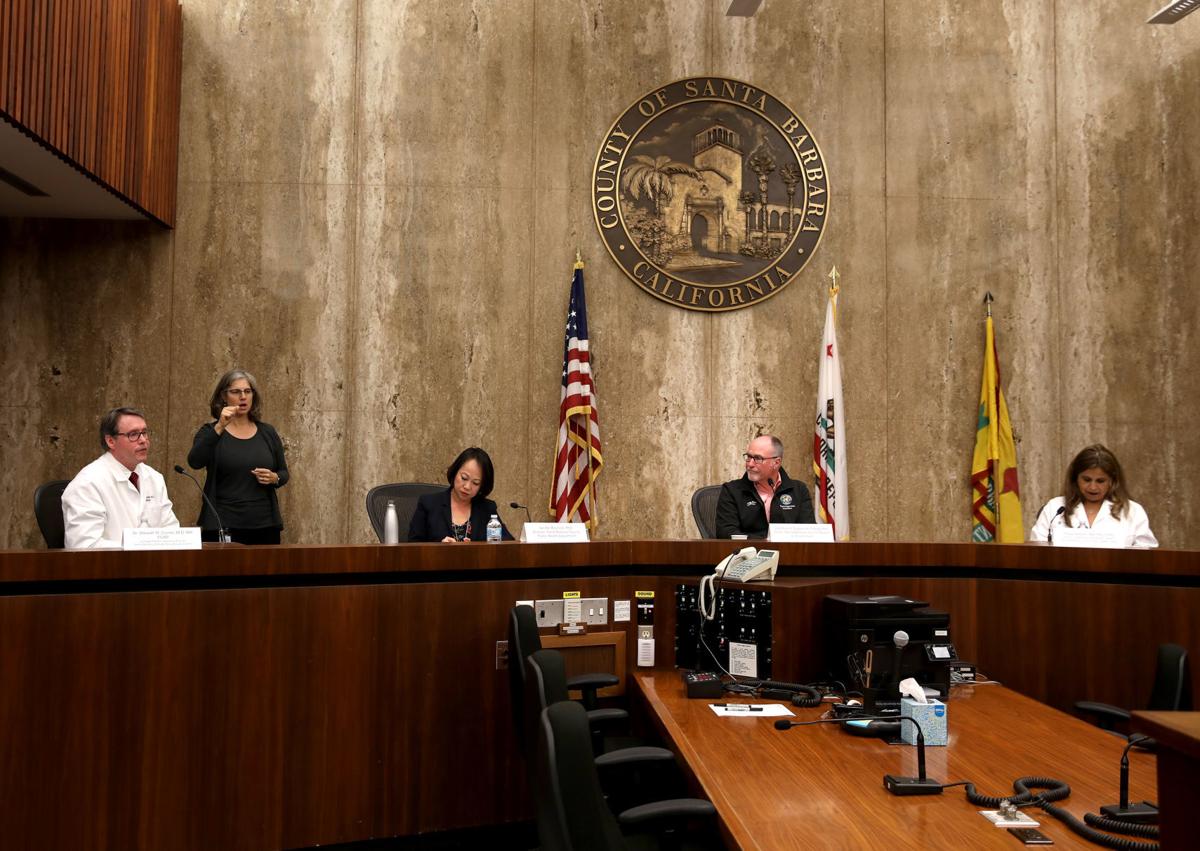 Santa Barbara County health officials and supervisors address the community about the coronavirus during a press conference Monday night at the County Administration Building. 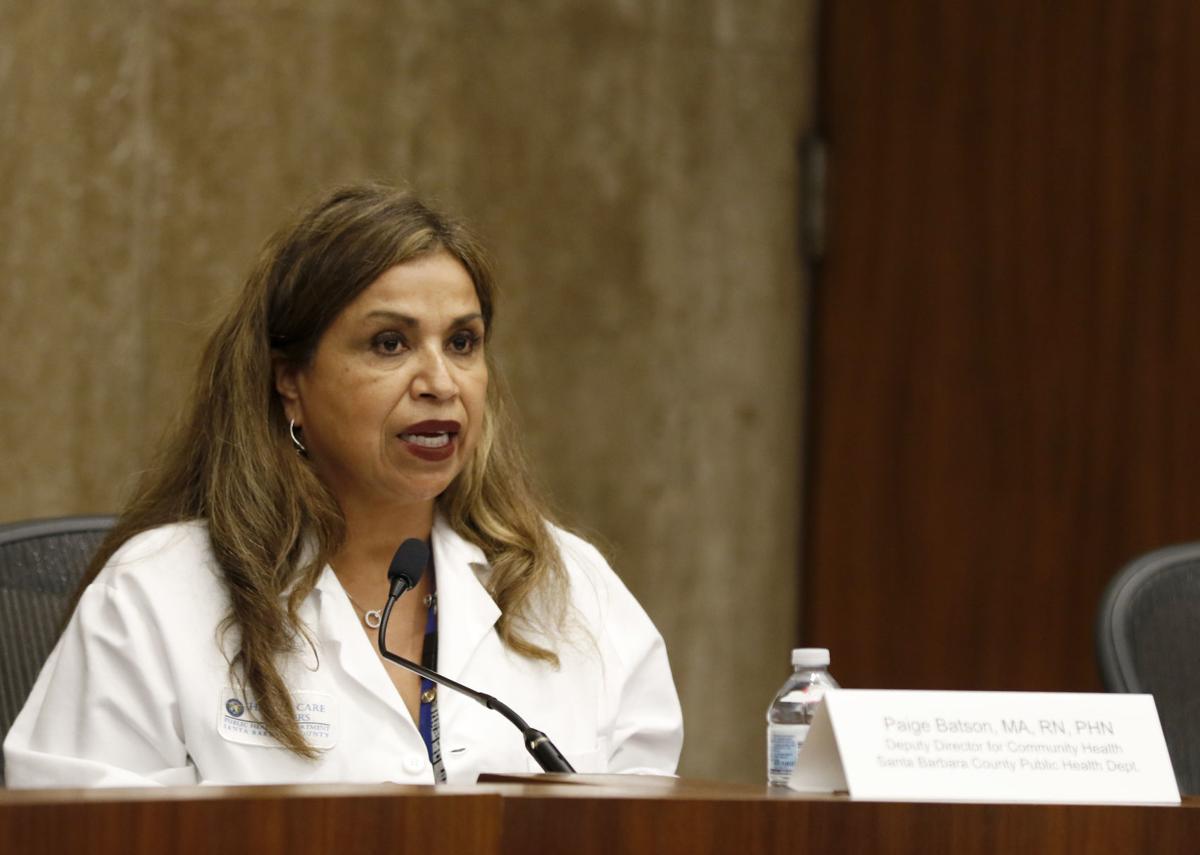 Paige Batson, deputy director of the Community Health Division, speaks during a press conference updating the community on the coronavirus Monday in Santa Barbara. 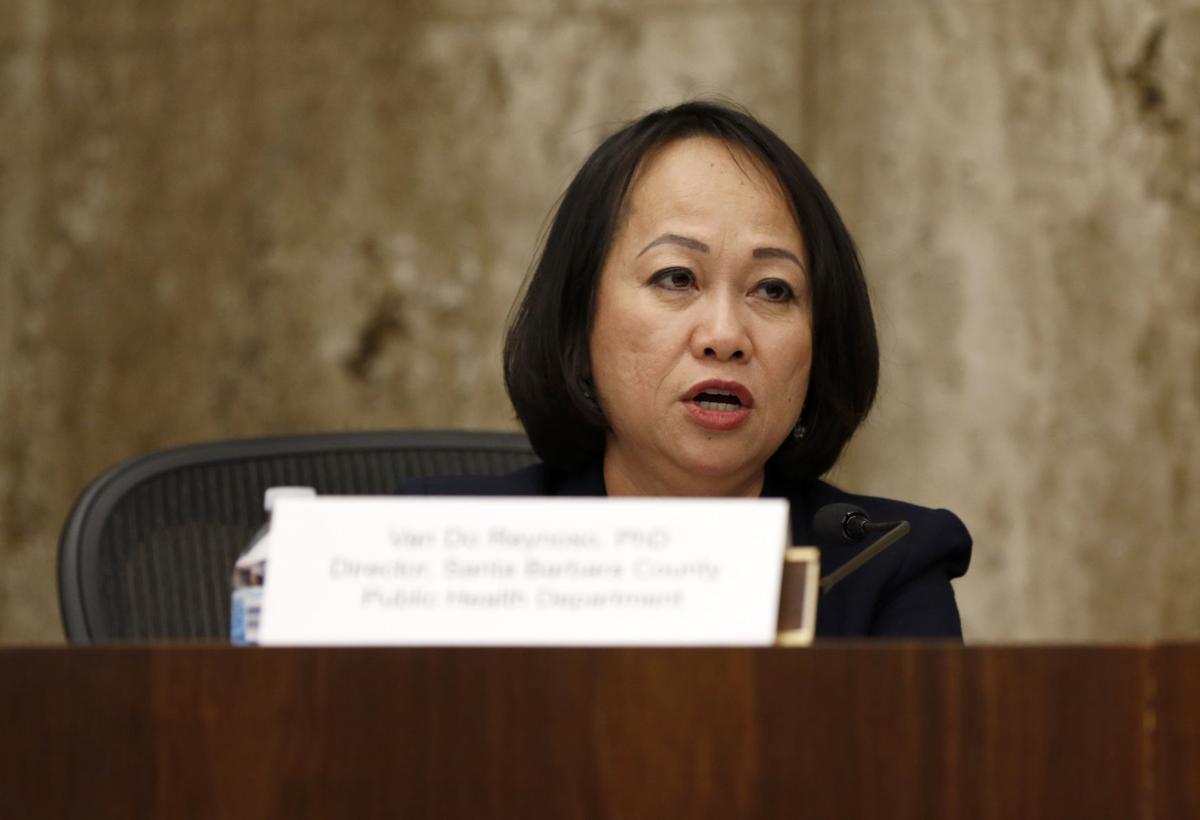 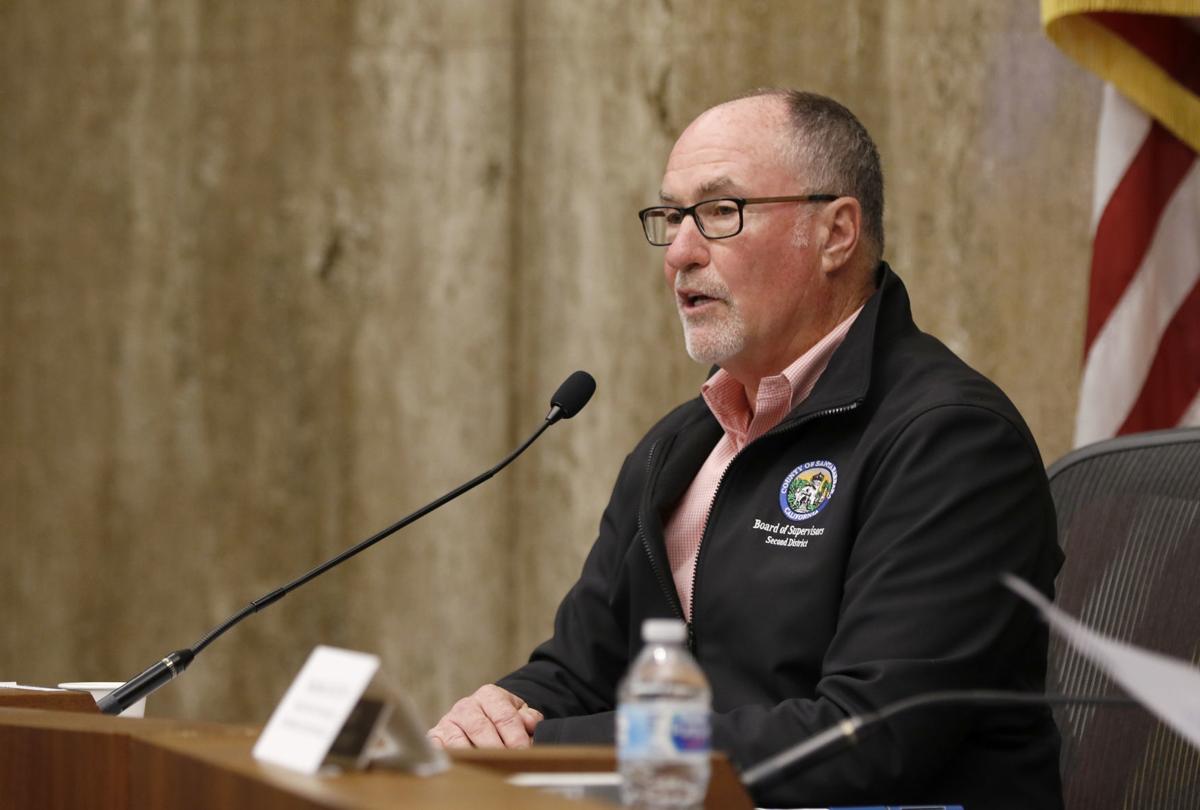 The Santa Barbara County Public Health Department has 1,700 coronavirus sample collection kits available to high-risk individuals, with one of those tests confirming the second case of coronavirus in the county Tuesday morning.

The initial announcement of the second confirmed case was made by Public Health Department Director Van Do-Reynoso at a County Board of Supervisors meeting during a coronavirus status report Tuesday.

She said the infection was not the result of community transmission.

The Public Health Department subsequently revealed the infected individual is a North County resident in their 50s with no underlying health conditions who had close contact with a patient in San Luis Obispo who was confirmed to have COVID-19.

The Santa Barbara County infected individual is recovering in isolation at home until cleared by a public health officer.

The second positive result comes after a recent wave of coronavirus testing in the county, where there are 1,700 collection kits between the Public Health Department, Cottage Health hospital system and private medical offices, officials said.

However, since this number does not cover everyone in the county who could have been exposed, tests are being limited to high-risk and severely ill individuals who meet certain testing criteria, public health officials said during a Monday press conference.

County Public Health Officer Dr. Henning Ansorg, who participated in the press conference via Skype, said all county hospitals and providers are determining the need for testing through a three-tier system.

The first tier, and first priority for testing, includes high-risk individuals including the elderly, those being kept in negative pressure rooms at hospitals due to severe respiratory illness, and members of the health-care workforce, including nurses, doctors and first responders.

"We would like to have everybody tested, but at the moment we just cannot afford it," Ansorg said. "I look forward to the next week or so when we have a much better availability of testing. Until then we, unfortunately, have to rely on such a tier system."

Dr. Stewart Comer of Cottage Health said within the tier system, there is a sufficient capacity of tests for those who are most at need in the county.

"It’s really important we understand that we are focusing on symptomatic patients, and in that context we have more than enough capacity," Comer explained.

Public Health officials said that as of Monday afternoon, they were aware of 128 COVID-19 tests that have been administered to date in the county.

Of those tests, one came back positive, while 31 were negative. Ninety-six are pending, but considering the newly confirmed case Tuesday morning, 95 now are assumed to be pending.

The testing numbers represent data from four hospitals and one private lab in the county, but additional data still is pending from additional facilities, Do-Reynoso said Monday.

"That number is a little bit underreported, as we are still waiting for data from one private lab and one hospital," she said. "We will be updating our website with more accurate numbers and enhanced numbers as that data becomes available."

Comer added that monitoring potential cases and initiating testing in Santa Barbara County has been a collaborative effort with neighboring San Luis Obispo and Ventura counties.

The first case in Santa Barbara County, a North County resident in their 60s, was confirmed Sunday by the Public Health Department. The second case is not believed to be connected to the first case.

As part of a thorough investigation into possible transmission via the first county case, Public Health Deputy Director Paige Batson said there are multiple individuals now under quarantine in Santa Maria being monitored by health officials.

These individuals continue to be asymptomatic, Ruiz said.

Five individuals in Isla Vista also are under quarantine due to potential exposure to a confirmed case of the coronavirus in San Diego.

Health officials continue to advise social distancing as a crucial way for the public to limit the spread of the coronavirus.

"We all have a role to play in our day-to-day actions as well. We must practice social distancing and healthy habits while also looking out for one another," County Supervisor Gregg Hart said Monday.

Chumash Casino Resort closed through end of March due to coronavirus

Since Friday, police officers in Santa Barbara County have implemented adjustments in the way they conduct business during the COVID-19 pandemic, including moving members of specialized units back into patrol and exercising discretion with arrest people.

Another $5 million was allocated Tuesday for construction of the Northern Branch Jail, plus another $5.4 million was set aside for contingencies, this fiscal year by the Santa Barbara County Board of Supervisors.

A Central Coast attorney who tested positive for COVID-19 and at least a dozen Santa Barbara County Sheriff's employees are in self-isolation following two separate exposure incidents, according to a sheriff's spokeswoman.

Dr. Stewart Comer speaks during a press conference in Santa Barbara, where he updated the community on the coronavirus Monday.

Santa Barbara County health officials and supervisors address the community about the coronavirus during a press conference Monday night at the County Administration Building.

Paige Batson, deputy director of the Community Health Division, speaks during a press conference updating the community on the coronavirus Monday in Santa Barbara.