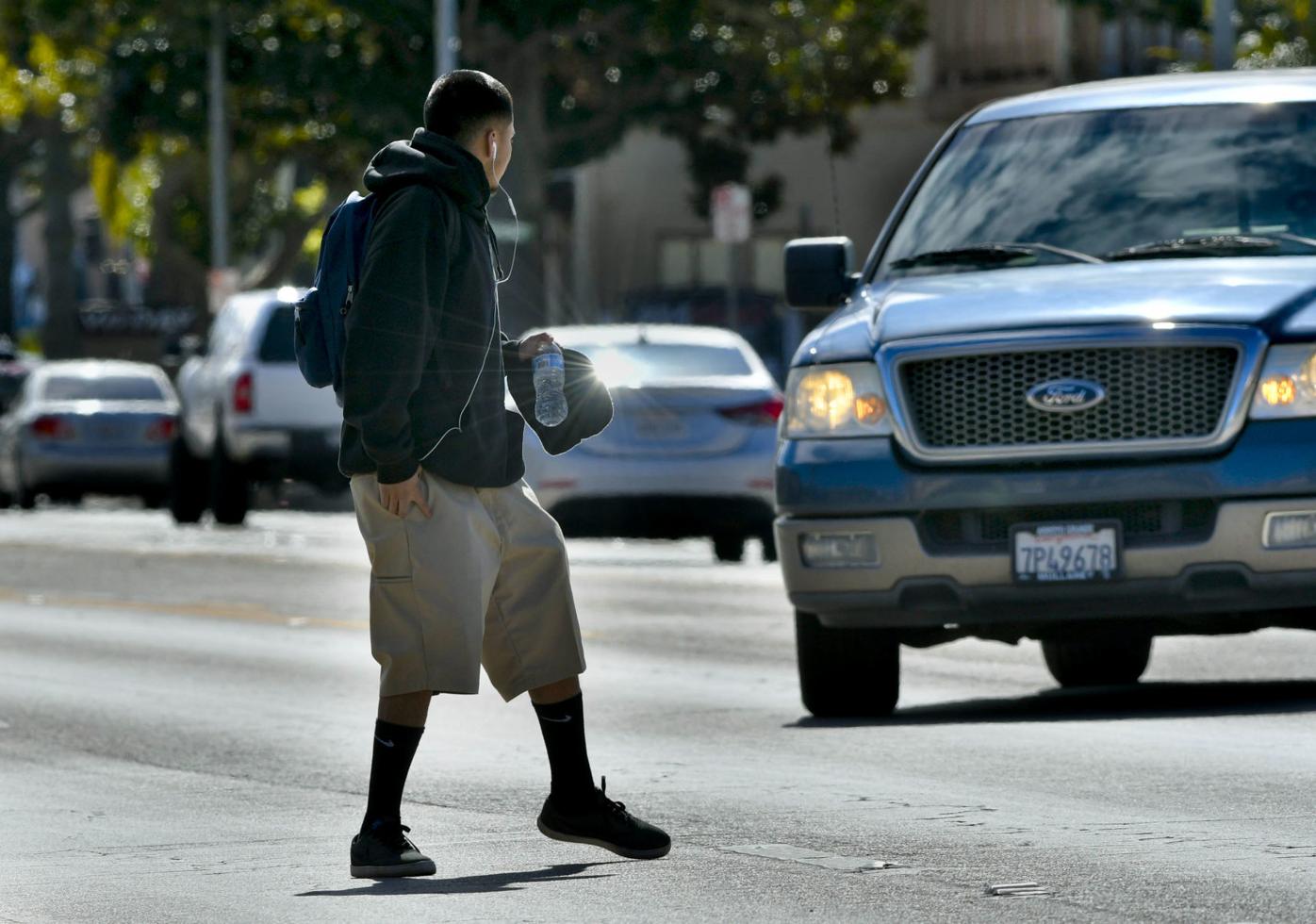 A Santa Maria High School student, who was trying to cross South Broadway outside of a crosswalk, retreats back to his side the street after a truck pulled out of the school entrance. 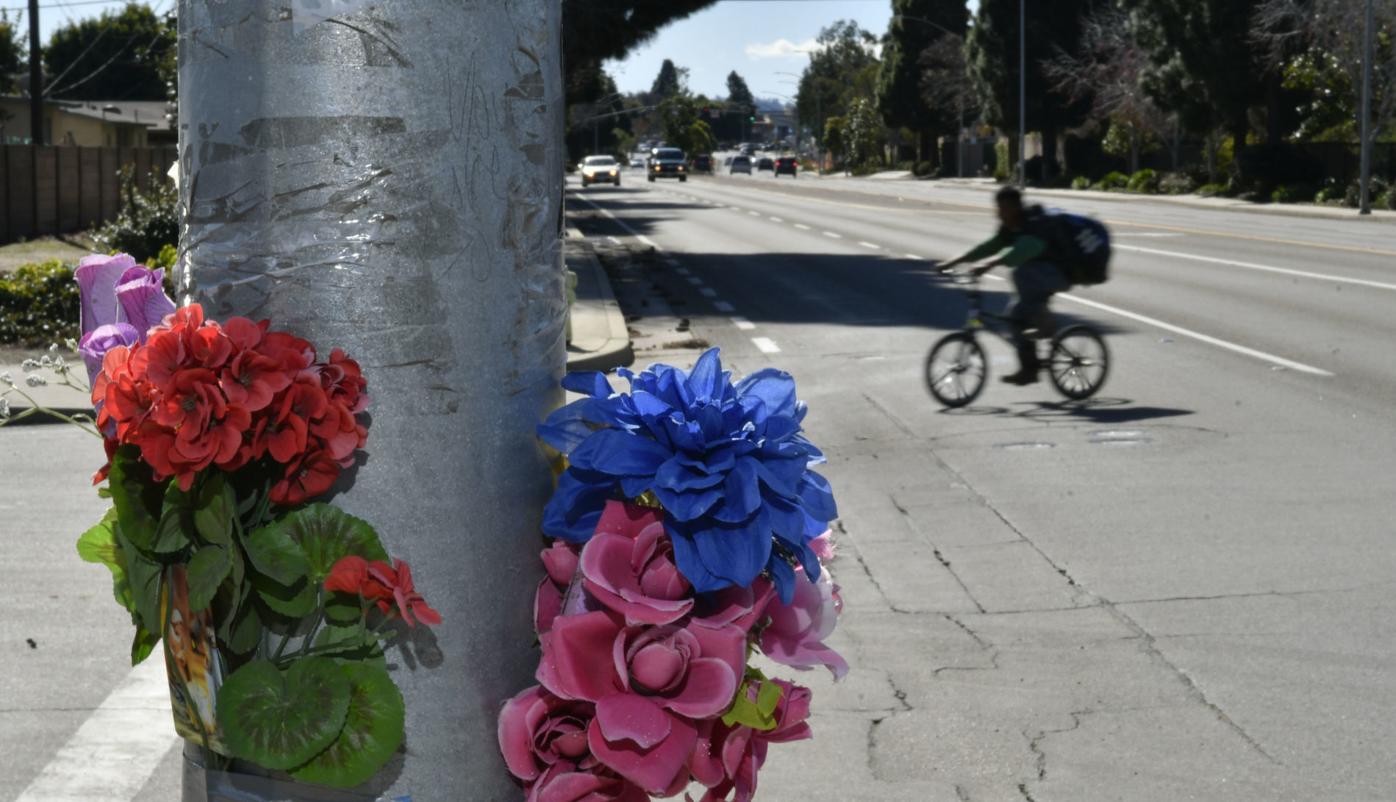 Flowers are still posted on a light pole at Miller Street and Newlove Drive, where a 15-year-old was killed in 2013 after she was struck by a vehicle.

A Santa Maria High School student, who was trying to cross South Broadway outside of a crosswalk, retreats back to his side the street after a truck pulled out of the school entrance.

Flowers are still posted on a light pole at Miller Street and Newlove Drive, where a 15-year-old was killed in 2013 after she was struck by a vehicle.

The city of Santa Maria is working to improve safety for pedestrians and cyclists with a combination of police enforcement in select areas, a bikeway network and a plan that proposes revamped city streets in the downtown area.

During that same period, there were five pedestrian deaths with the most recent being that of 85-year-old Santa Maria resident Rodolfo Tovar Rodriguez, who was killed in the 1400 block of South Broadway while he was reportedly attempting to cross the road.

Those operations — which are paid for by the California Office of Traffic Safety — will be carried out in areas where bike and pedestrian collisions occur most often, Schneider said.

“We find a lot of these collisions are on Broadway and Main Street,” he said, adding West Cook Street, by the Salvation Army, and West Stowell Road have also been hot spots for collisions.

Ken Hough, executive director of the Santa Barbara County Action Network, which advocates for the use of alternative modes of transportation, said he noted numerous safety hazards during a project to walk every street within Santa Maria’s city limits four years ago.

“I wanted to get to know my new town that I decided to move to,” he said. “I felt like if I did this, I would learn the town and I would learn the bus routes because one of my rules for myself was I would not drive a car or take a ride from anyone to a starting point.”

Among the issues Hough noted was that traffic lights along Broadway and Main, especially East Main, are spaced long distances apart.

“On East Main, it’s about a mile from Broadway to the freeway. There’s a stoplight at Miller and one at College — those are the places that have any kind of signal or crosswalk or any kind of indication that it might be safe to cross as a pedestrian,” he said. “There’s about a third of a mile between places you could cross with a light and a lot of people aren’t going to walk that far.”

Though pedestrians can legally cross at any intersection, regardless of whether there is a light or painted crosswalk, Hough said the speeds at which vehicles drive down Broadway made it impossible to safely cross without a light.

“Just as an experiment I tried to cross every block while I was walking North Broadway — and it was really hard,” he said. “I didn’t step off the curb until it was safe but I stood there looking at the traffic coming towards me, sometimes with my hands out like, ‘Please can I cross?’ Nobody stopped, so I would only cross when all the traffic had cleared so I’d stop, go to the next block and do the same thing. If there were traffic lights, I was able to get across. I think drivers think that if there’s not a painted crosswalk, that the pedestrian doesn’t have any right of way.”

Santa Maria resident Barry Stotts, who has served on the Santa Barbara County Transit Advisory Council, has seen first hand how city streets that are wider result in faster-moving traffic.

Stotts, who has impaired sight and walks with a cane, said motorists making right-hand turns too quickly without seeing if someone is in the crosswalk have been especially problematic for him.

On one occasion, approximately 10 years ago, he was knocked down by a car making a right-hand turn in the Broadway and Cook Street intersection.

One project city officials hope will make Santa Maria safer for alternative transportation options such as bicycles is the Active Transportation Plan, which the city began developing in fall 2018 with a consultant.

Principal Civil Engineer Rodger Olds said the city will hold the first of several public outreach events in late March to gather feedback from residents to guide the development of a comprehensive citywide plan of interconnected pedestrian and bike paths.

The goal is to make Santa Maria’s streets and sidewalks more welcoming for bikes, pedestrians and wheelchairs.

The Downtown Streetscape Concept Plan, which was approved by the City Council in January, proposes an overhaul of Main Street between Pine and Miller streets, and Broadway between Cook and Mill streets.

The plan — which aims to foster development in the downtown area — proposes many street enhances that pedestrian and cyclist advocates have sought in an area with heavy traffic.

While it’s not yet clear what aspects of the plan will ultimately be feasible, the proposal calls for narrowing the vehicle lanes, protected bike lanes, bulb-outs and crosswalks that are delineated with either texture or material.

Bulb-outs, curbed pop-outs that usually hold plants or trees, along the road would further reduce the crossing distance, Olds said.

Olds said a traffic study would examine vehicle traffic in the area and determine which aspects of the plan can be implemented.

“We’re not trying to create gridlock in our downtown,” he said. “We might be slowing traffic down a little bit, but that’s to facilitate pedestrians.”