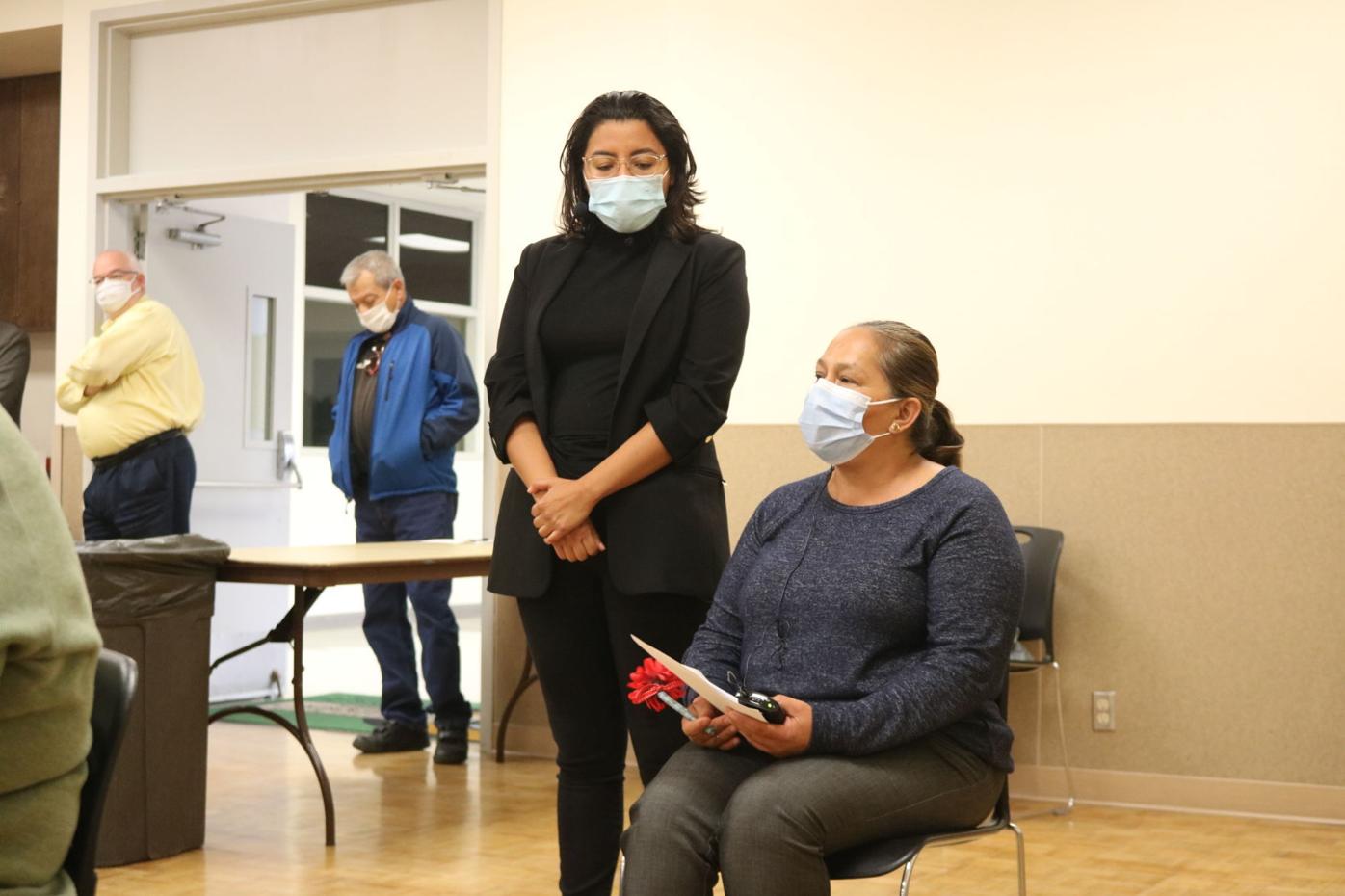 Santa Maria community member Elvia Salazar, right, shares about the stress of having to wait for a Spanish translator when she makes a 911 call during a Santa Maria Police Department community forum at Minami Community Center on Monday, with Ivette Peralta providing interpretation. 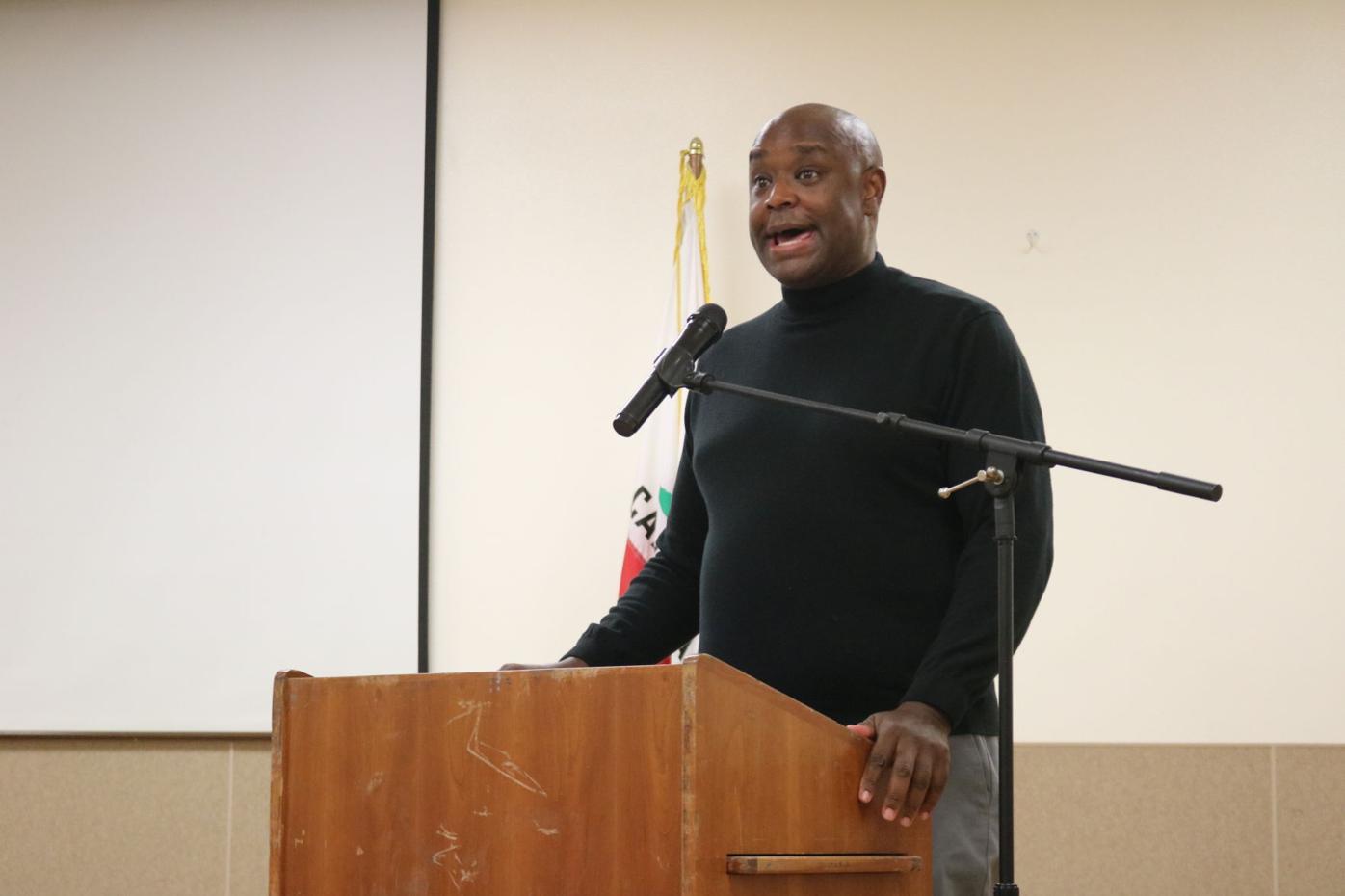 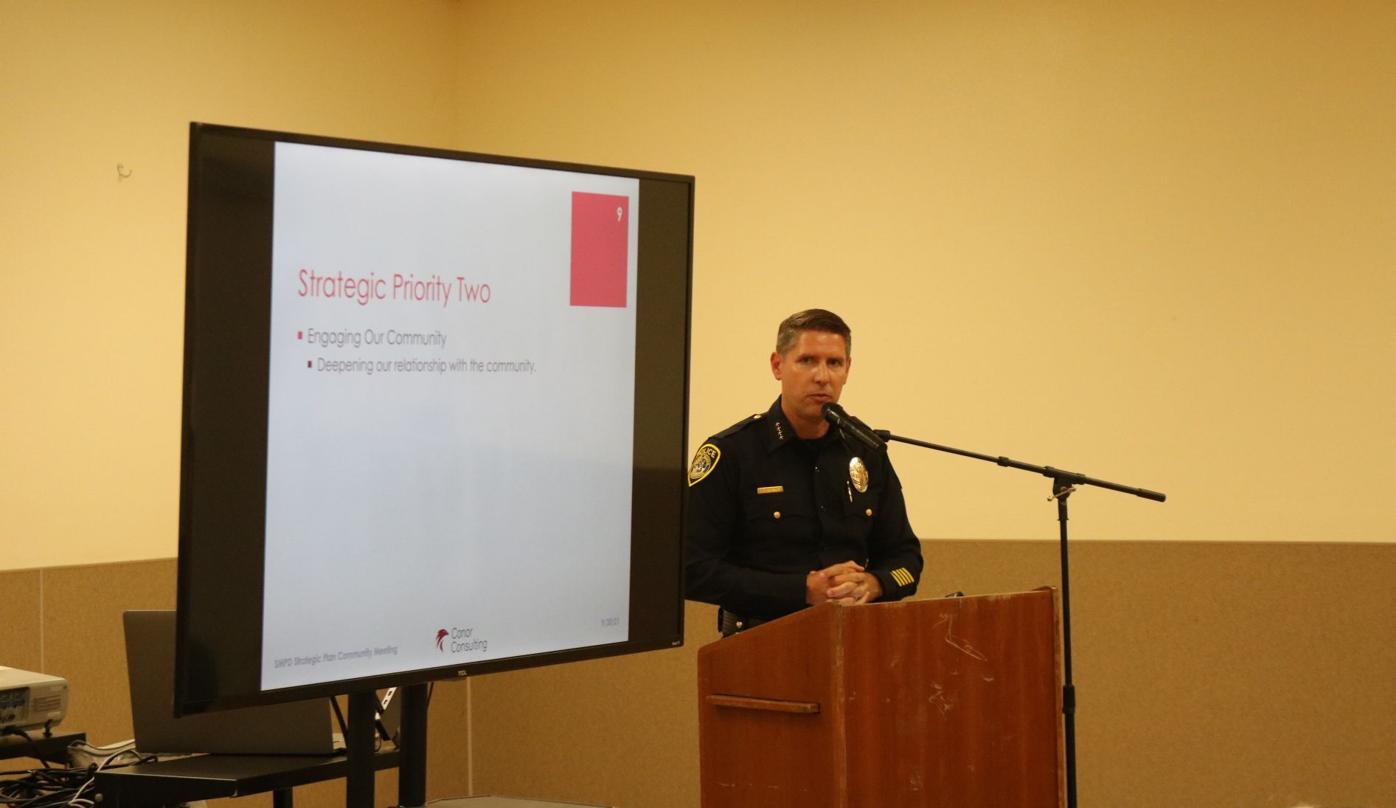 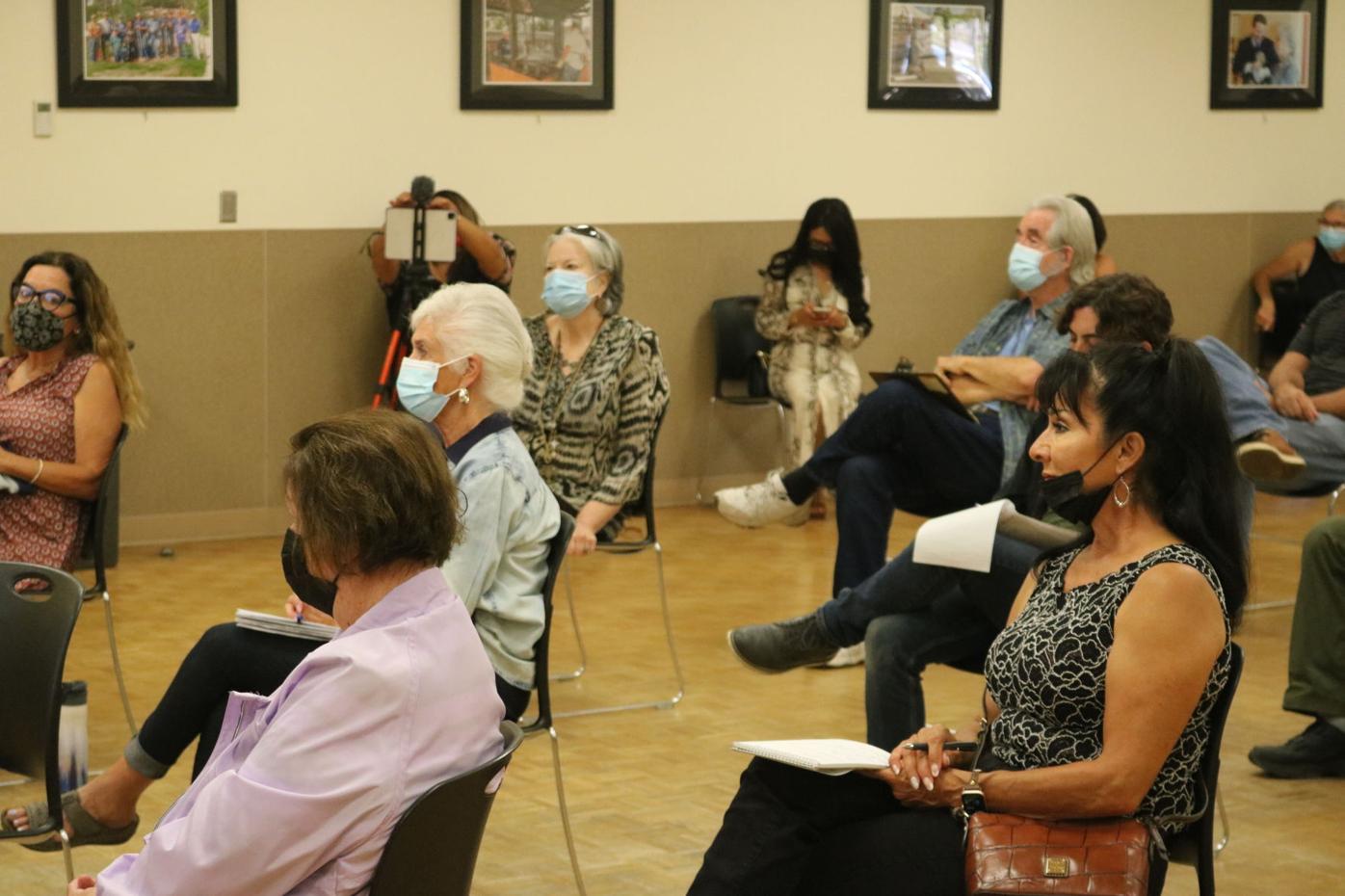 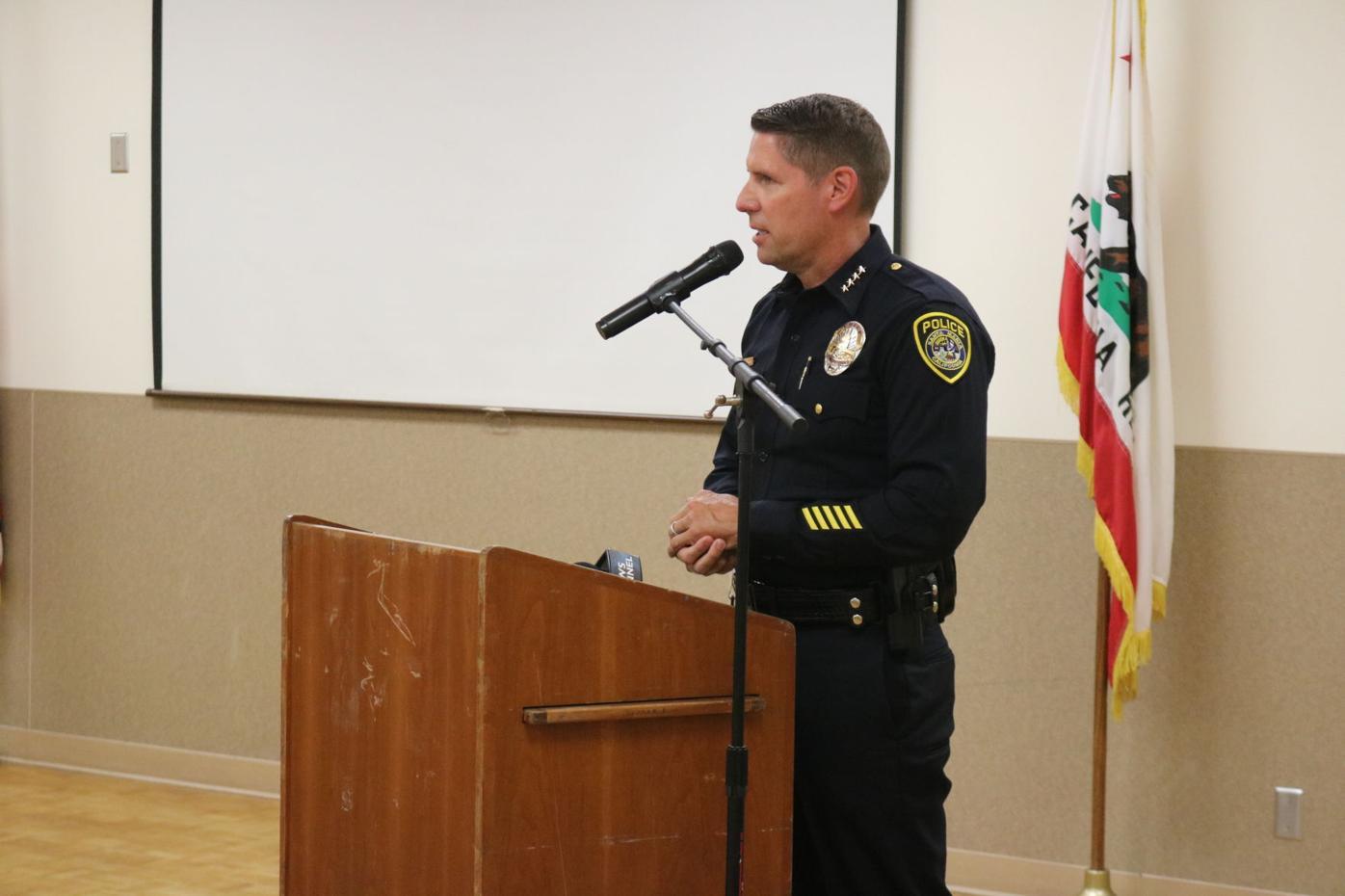 Santa Maria community member Elvia Salazar, right, shares about the stress of having to wait for a Spanish translator when she makes a 911 call during a Santa Maria Police Department community forum at Minami Community Center on Monday, with Ivette Peralta providing interpretation.

The Santa Maria Police Department hosted around 25 community members at a bilingual forum Monday to discuss the department's objectives and planned areas of growth that will be integrated into its strategic plan.

Department leaders identified specific priorities for 2022-24 with the help of consulting firm Conor Consulting, and plan to use the community feedback to craft three to four specific objectives for each priority before presenting the plan to the City Council in December.

Patrol Division Manager Jack Dunn said it was important to codify a plan for the department's goals and objectives using public input as the department continues to improve community relationships and transparency.

"This is the first time we’ve done a formalized strategic plan. Over the past nine years, we've been doing a lot of reform … and with the changing of the guard, we felt like the department was getting handed back to us," Dunn said, noting recent leadership changes like the departure of former Chief Phil Hansen. "These are the people we serve, so it’s good to get input from the community."

The department's main priorities for the coming three years include investing in their workforce amid struggles with hiring and retention, engaging the community to build relationships where they are lacking, and protecting the city by employing modern policing strategies with advanced technology.

Police Chief Marc Schneider said one of the objectives related to investing in the workforce will be the promotion of health and wellness services and creating a culture where people are encouraged to talk about, rather than ignore, issues they may face due to the difficulties of the job.

"We really care about our people and that’s part of it — investing in the people, so they’re healthy and able to come to work," Schneider said.

When it comes to community engagement, one of the objectives will be to serve the most vulnerable in the population, such as those living with mental health conditions.

To help meet this need, department leaders are in the process of establishing a mental health co-response team that will include an officer and a clinician from the Santa Barbara County Behavioral Wellness Department to respond to mental health and drug-related situations. A crisis intervention officer has been in the role for around a year, and the department is awaiting final approval from county council to bring a clinician onto the team, Schneider said.

The department is also reviewing options for officer body camera systems, something community members have requested in recent years to increase police accountability. The plan is to conduct a pilot program with one of the systems in January and analyze potential costs.

Attendees also raised concerns about the need for increased bilingual services and cultural competency in the department, which were not identified as priorities in the plan.

Santa Maria resident Elvia Salazar recalled a time when she called Santa Maria police in an emergency and had to wait while the operator found a Spanish-speaking translator to speak with her. Having more bilingual staff would help remove barriers to timely response for a lot of residents, she said.

"When they were trying to connect me to the translator, we lost a lot of time. It would be great to not have to take that step," Salazar said.

According to Schneider, 43% of the department's sworn personnel are bilingual in English and Spanish, along with 26% of professional staff. While he would like to have as many bilingual staff as possible, he said departments across the country are struggling with attracting qualified candidates.

Spanish is the principal language spoken in the home for approximately two-thirds of Santa Maria adults, according to census data.

"Because it’s a large Spanish-speaking community, there is frustration that sometimes we don’t have someone there to translate. It causes that delay that can be unnerving for people. It’s a hard one to solve," Schneider said.

While Spanish interpreters were provided for the event, residents criticized the department for offering the corresponding digital and paper survey, provided as another way to gather input on the strategic plan, only in English. Officials agreed to translate the document into Spanish.

Paul Conor of Conor Consulting recommended that the department hold quarterly reviews to ensure they are meeting their goals outlined in the plan.

Editor's note: This story was updated to add information about accessing the department's strategic plan survey.