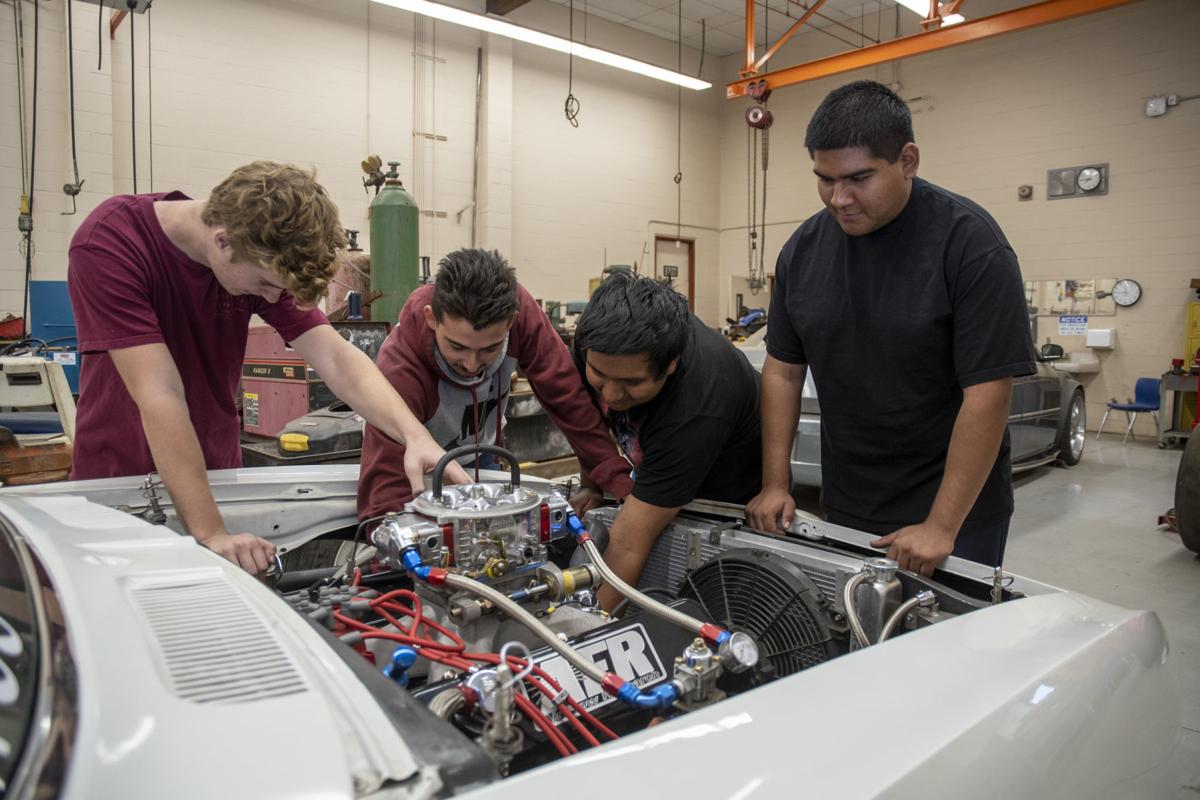 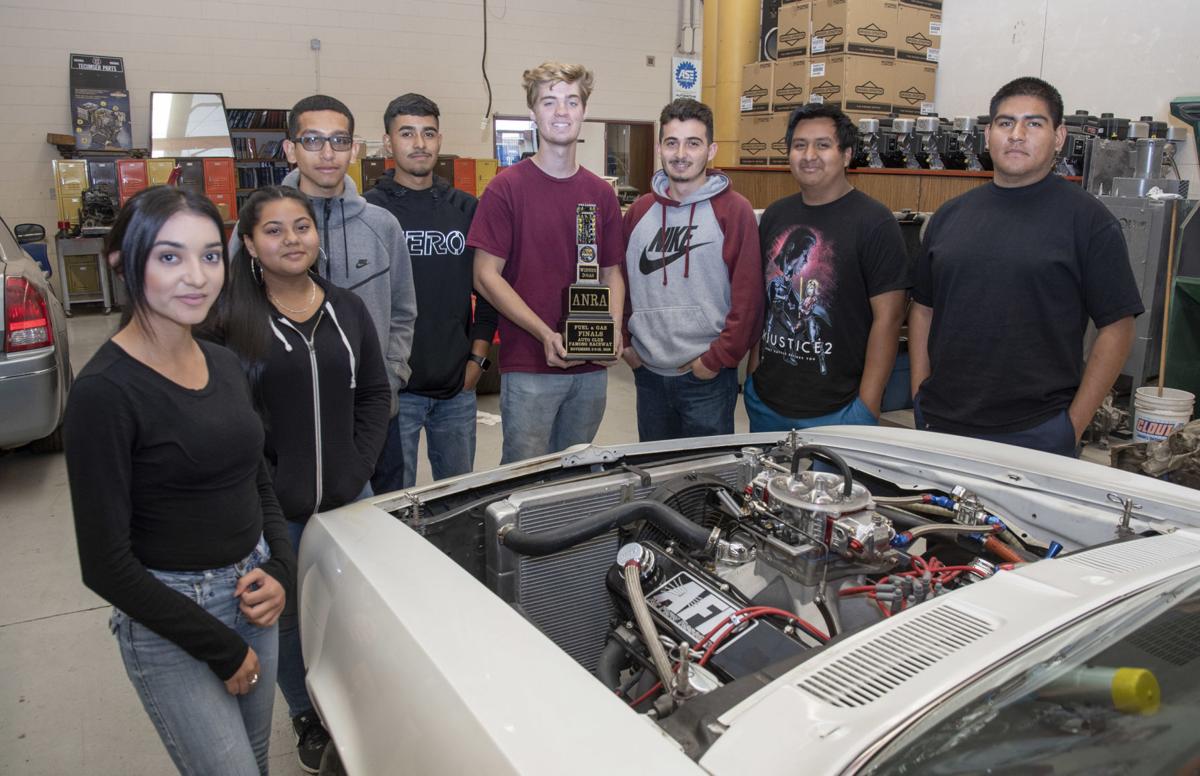 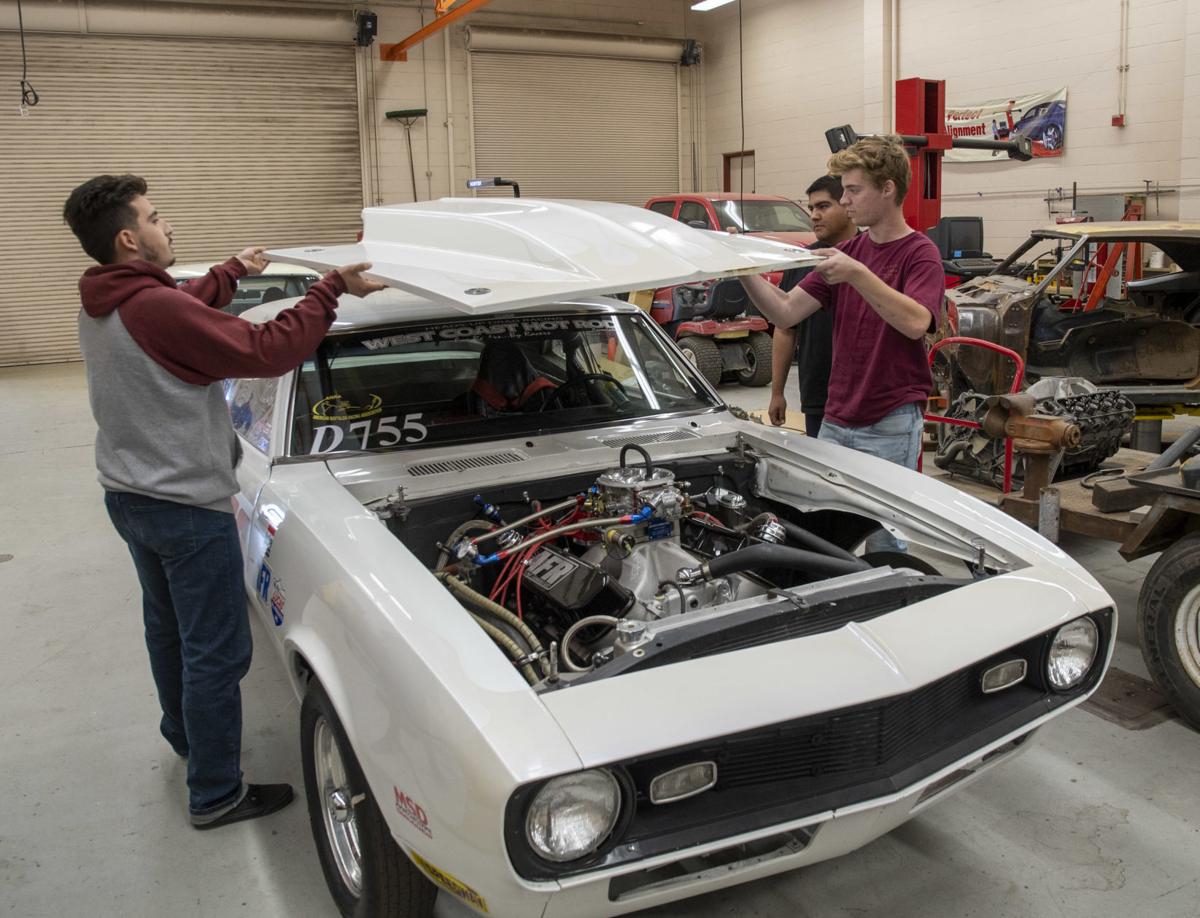 Past Gate 22 on the Santa Maria High School campus, 10 students have been constantly working on a drag racing car inside the school’s auto shop.

"SMHS Pro Racing" is boldly painted on the sides of the white 1968 Chevrolet Camaro, where stickers promote the team's various sponsors.

The high school race team was tasked with ensuring the Camaro would run smoothly and quickly enough to take professional driver Greg Dreher to the winner's circle.

And their hard work paid off Nov. 14 at Famoso Raceway in Kern County.

Members of the 12-year-old club watched as the Camaro took the team's first-ever title in the 35-car D/Gas Class at the American Nostalgia Racing Association competition.

“It’s amazing to think of the odds of this feat," said club advisor Matt Almaguer, noting the kids made sure the car was prepped to win against the pros.

“We raced against regular, professional adult racers,” said Almaguer, who has overseen the club since 2017.

Now, after collecting that first trophy since the club was formed in 2007, the students are thinking about their next step: competing at the Lucas Oil NHRA Winternationals at Pomona in February.

“We’re going to apply,” Almaguer said. “We could be the first high school team to compete for the national event.”

Along with the ’68 Camaro, the club also worked on a 1974 Mercury Comet, installing a new engine before it hit the strip as well as making adjustments, baseline tune-ups and other fixes on both cars.

Driven by Santa Maria Joint Union High School District electrician Andy Frietas in the E/Gas and Hot Rod divisions, the Comet won the first round of the Hod Rod Class but was eliminated in the second.

“We ran each car in two different divisions or classes,” Almaguer said. "And the D/Gas Class was where we were fortunate enough to go through 35 drivers, and we went through the bracket. It’s an elimination."

Joe Graack, who serves as the club’s president and makes the drive from Righetti, admitted he and the rest of the club members were skeptical about a new engine before they installed it in the Camaro.

“We didn’t really expect too much out of this car because we just installed the new 565-cubic-inch motor,” Graack said. “It was kind of supposed to be a shakedown run. But it ran perfect and we kept hitting our time — and got first place.”

Graack said he and club members were meticulous about ensuring the engine was properly installed and running strong.

“We made sure we took every precaution possible to extend the longevity of the engine,” Graack said. "It took a while, and we had to wait for the parts. There was a lot of down time waiting for the parts.

“It wasn’t super hard [to install] because it’s the same block as the previous engine, but we took a lot of time building it to make sure it was perfect and ran right.”

Although Dreher was the winning driver, Jody George is the primary driver of the Camaro. But during the Nov. 14 meet, he was in Las Vegas competing in the NHRA Division 7 Series.

Dreher, from Bakersfield, has a strong rapport with the race club teens, Graack said.

“Greg is a really great guy and great driver,” Graack said. "We’re glad to have him on our team."

Some of the sponsors for the race club include local businesses Fisher Pump and Well Services, Apex Auto Glass and Tinting, Famco Development and Central Coast Street Rods.

Almaguer said the engine parts came through a partnership with the manufacturer and Kurt Henkle at Enginetech Machine in Santa Maria, which performed the machine work.

“There has never been a high school race team that has built a car and competed in a national event,’’ said Matt Almaguer, the auto shop teacher and race team adviser. "We are all excited to represent our school, the SMJUHSD and Santa Maria.’’

Senior Reporter Elliott Stern caught up with the Santa Maria High School Race Team as it's making history in Pomona. The team was followed by FOX Sports cameras at the NHRA event with footage being prepped for air this weekend.