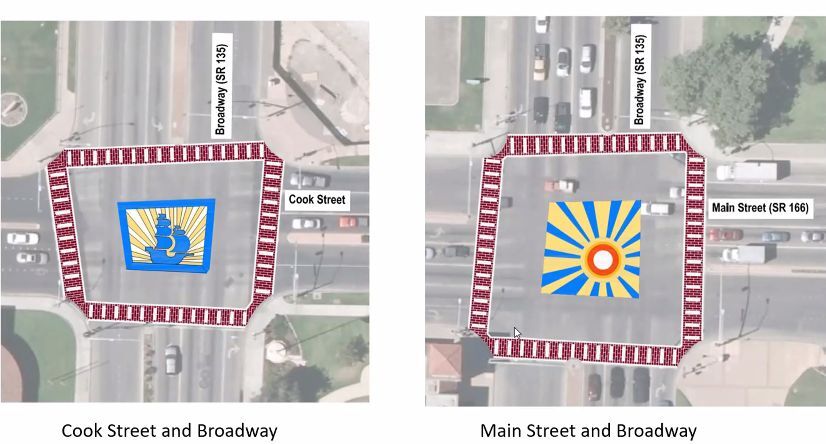 Conceptual designs for Broadway intersections at Cook and Main streets, presented Wednesday to the Santa Maria Downtown Revitalization Committee, show stamped and colored asphalt crosswalks and painted artwork in the center of the intersections. 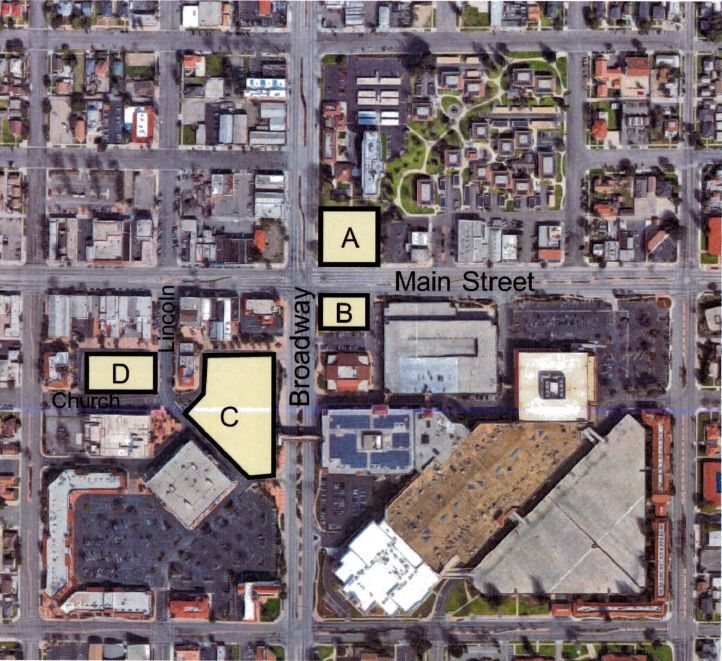 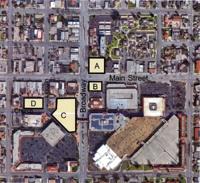 A map from a June staff report highlights four currently unused city properties that have been designated as surplus land. 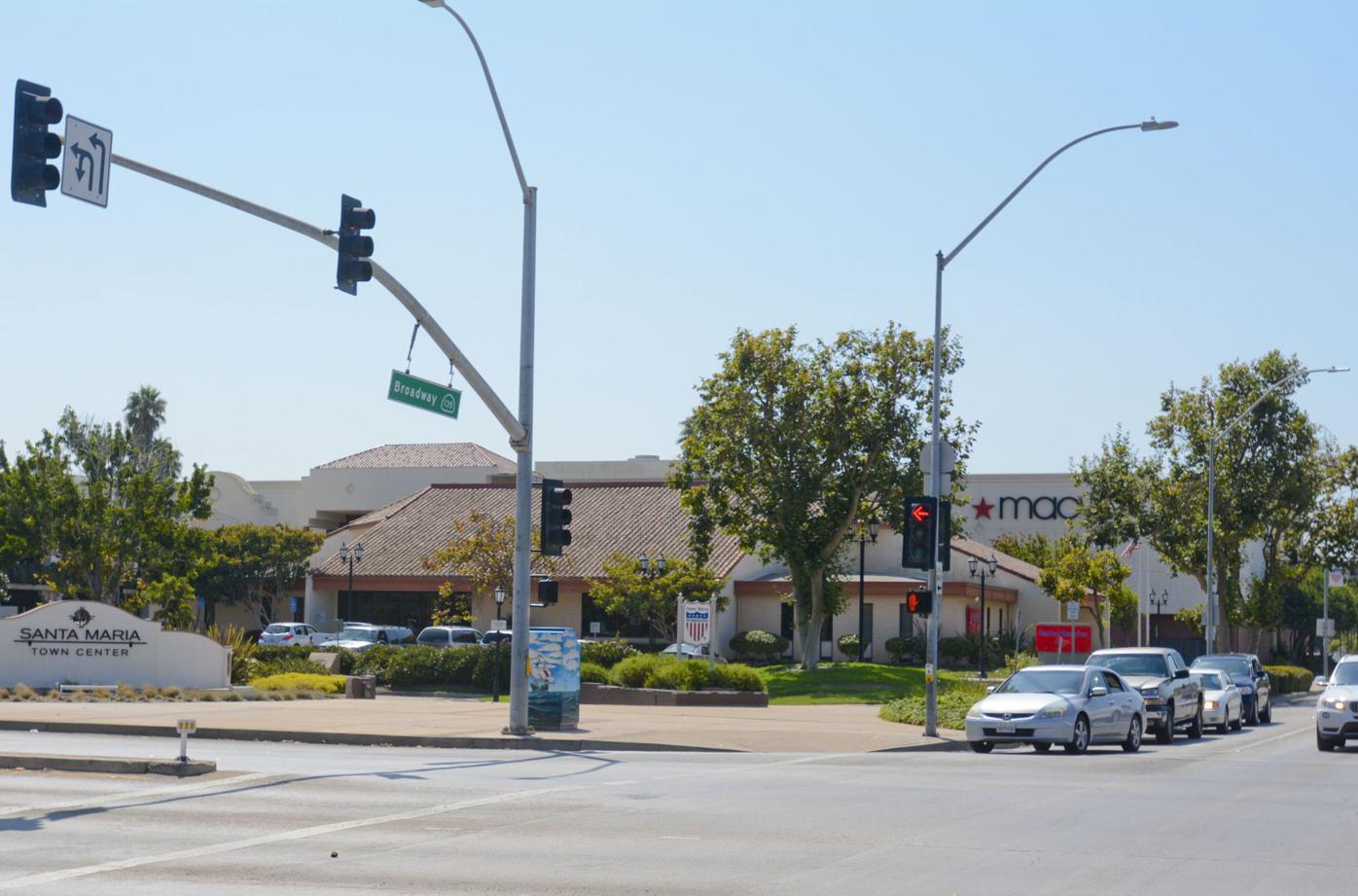 The intersection of Main Street and Broadway, looking at the Town Center Mall, is shown in 2017. 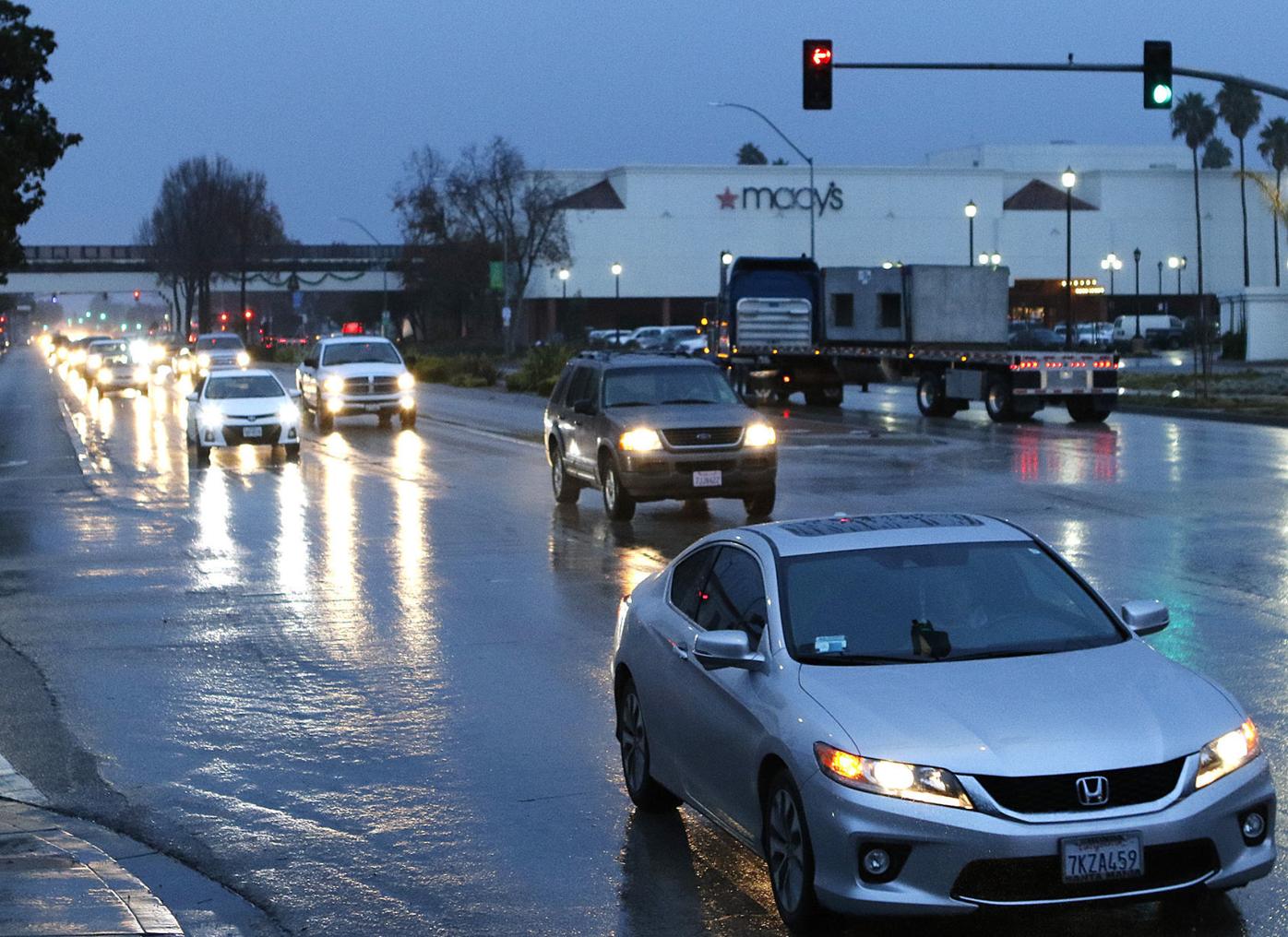 Cars travel through the intersection of Cook Street and Broadway in 2015.

Conceptual designs for Broadway intersections at Cook and Main streets, presented Wednesday to the Santa Maria Downtown Revitalization Committee, show stamped and colored asphalt crosswalks and painted artwork in the center of the intersections.

The intersection of Main Street and Broadway, looking at the Town Center Mall, is shown in 2017.

Cars travel through the intersection of Cook Street and Broadway in 2015.

At a Wednesday meeting of the Downtown Revitalization Committee, city engineers highlighted different materials that could be used to revamp crosswalks and curb ramps at the Broadway and Cook Street intersection next to City Hall and the intersection of Broadway and Main Street, the latter of which city officials said is the most difficult in the city for pedestrians and bikers to cross.

The designs are intended to beautify smaller areas of downtown while the city works on meeting larger development goals outlined in the 2019 Downtown Multimodal Streetscape Concept Plan, such as the addition of street furnishings, trees, bike lanes and narrower traffic lanes.

"Before we get to those long-term goals, what is something we can do in the interim to beautify our downtown area, specifically looking at Broadway?" principal civil engineer Eric Riddiough said.

After finalizing a design and determining associated costs at a future meeting, staff plans to start construction by early summer, around the same time that Caltrans will jumpstart a $10 million pavement and curb ramp rehabilitation project along Broadway from Lakeview Road to Highway 101.

Potential designs being considered for the crosswalks include stamped and colored brick-patterned asphalt, inlaid asphalt patterns like chevrons, or thermoplastic-painted illustrations ranging from the city's ship logo to flowers to colorful swirls.

Since Caltrans owns both Broadway (Highway 135) and Main Street (Highway 166), city staff also must gain approval from Caltrans on potential designs for the intersections, according to Riddiough. However, the city will be in charge of maintaining the area.

"We’re still very much in the conceptual design," he said. "There’s numerous possibilities, but we want to make sure it’s something Caltrans would support, is relatively low-cost, but brings some character."

Of the three potential designs, Riddiough said thermoplastic paint is likely to need more maintenance and touch-ups than the stamped and colored or inlaid asphalt design because of the wear on the colors from high levels of pedestrian and vehicle traffic.

Rather than using thermoplastic paint on the actual crosswalk path, staff also presented the option of painting a large illustration like the city's trademark ship in the center of the intersection or close to the curb ramps. However, such ideas still are being debated with Caltrans.

In addition to working on streetscapes, the city is also in the process of developing uses for four city-owned properties along Broadway and Main Street in the heart of downtown.

In January, the city agreed to work with Santa Barbara-based developer Vernon Group on potential designs for the use of the four sites, according to a staff report. However, in compliance with the state Surplus Land Act, the city also shared a Notice of Availability with nearby agencies and housing developers in June.

"We are currently within a negotiating period, in compliance with the State’s Surplus Land Act," said Community Development Director Chuen Ng.

The act encourages the building of affordable or low-income housing on city surplus land.