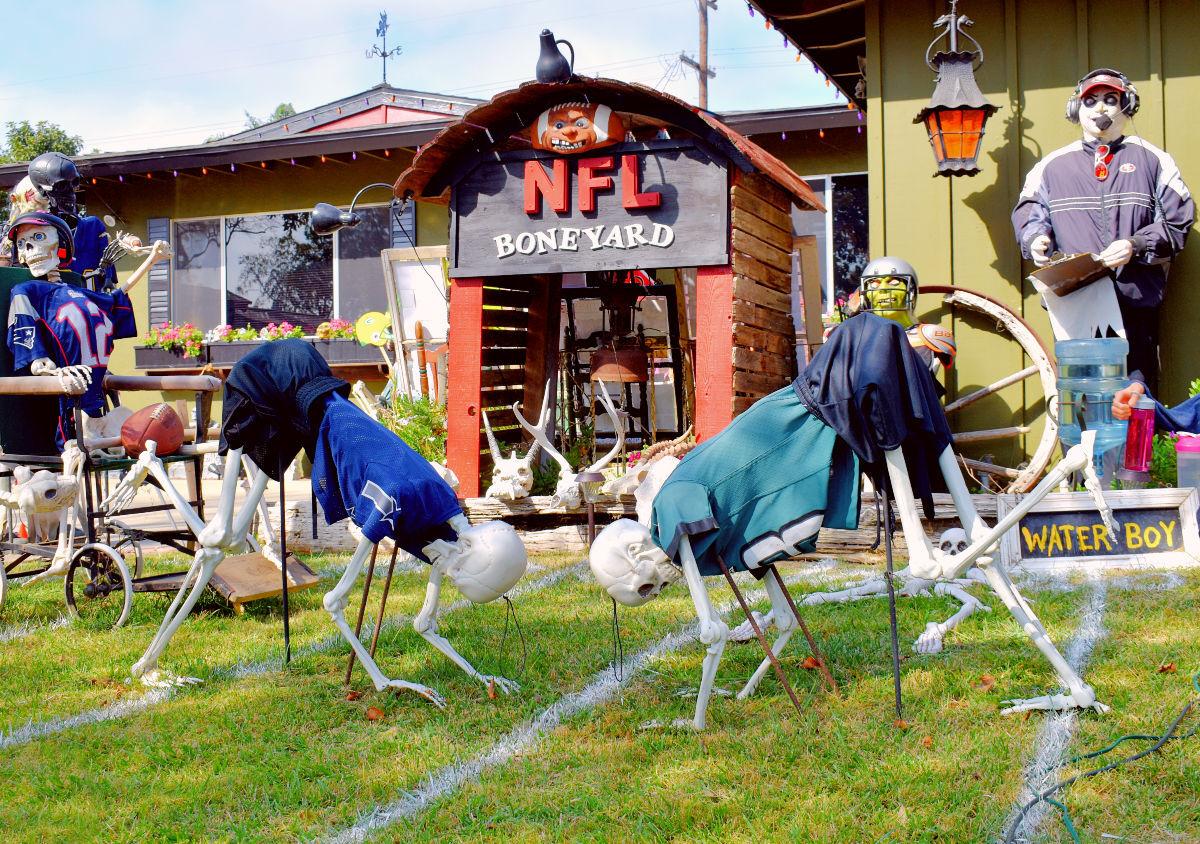 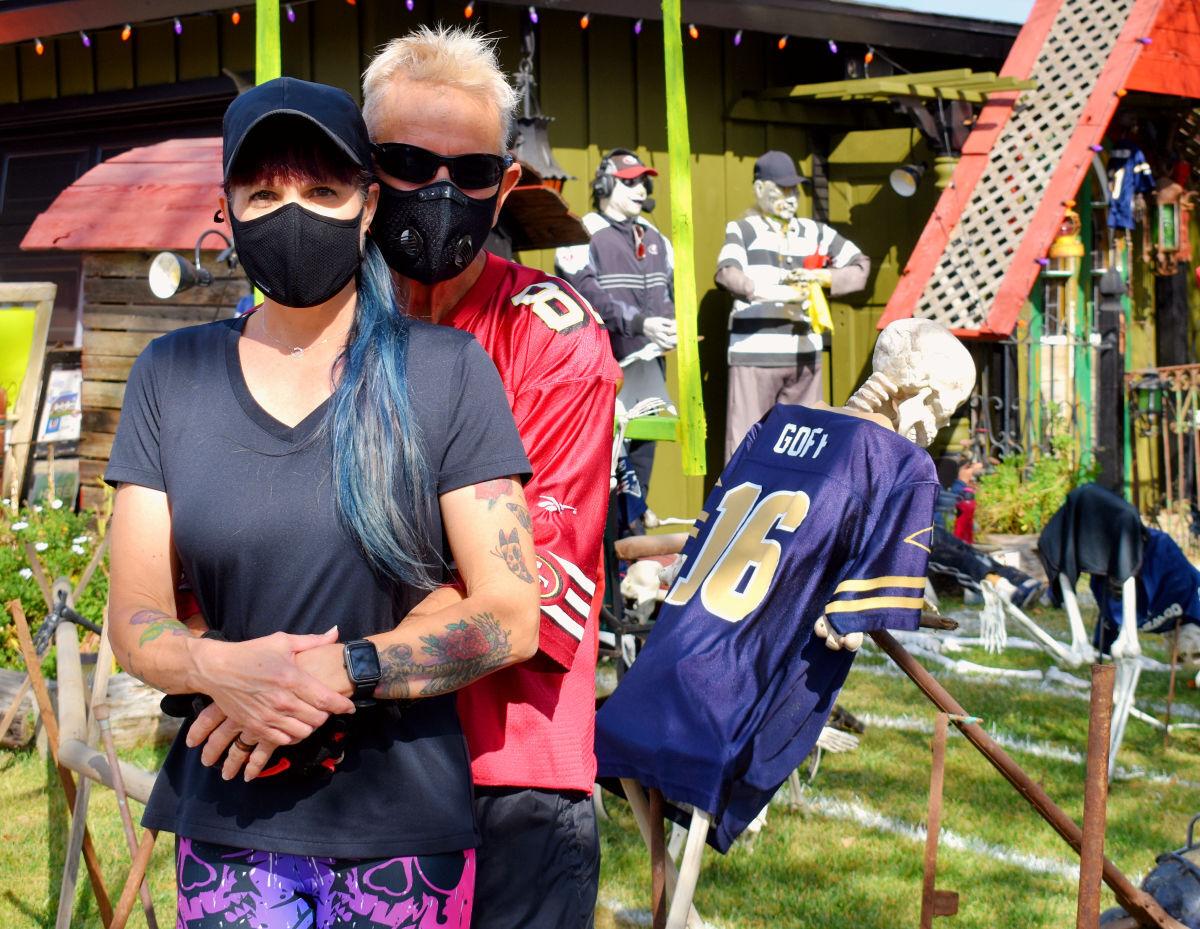 Wayne and Wendy Steller pause in front of their Santa Maria home decorated with an NFL theme in their elaborate annual Halloween display. 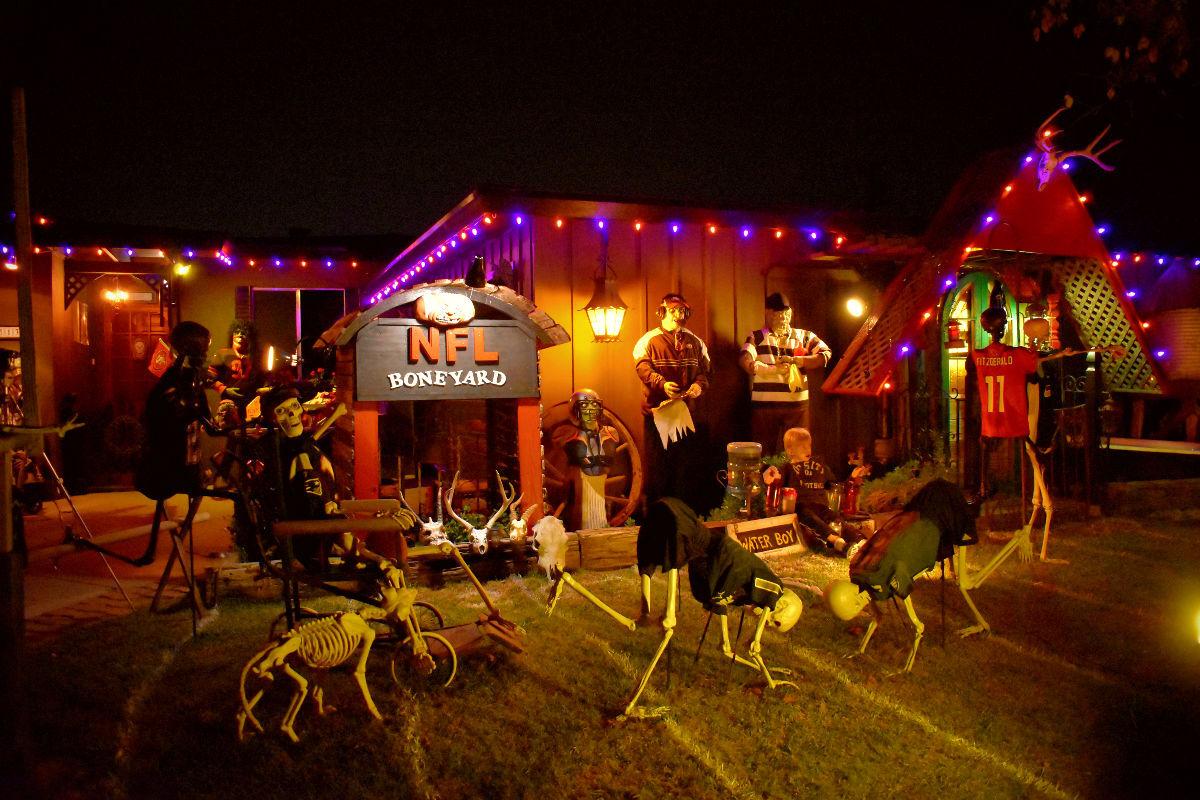 At night, the "NFL Boneyard" scene is illuminated in the annual Halloween display at Wendy and Wayne Steller's home in Santa Maria. 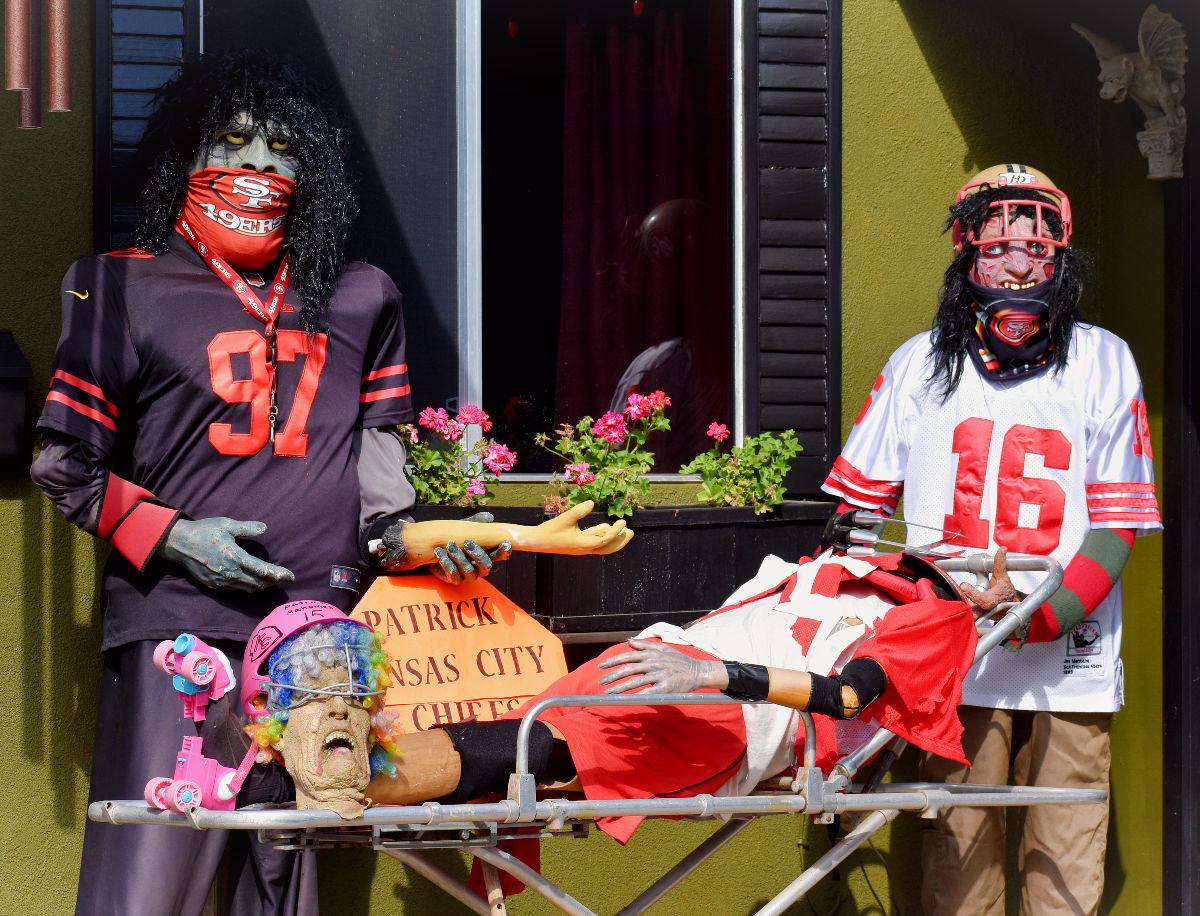 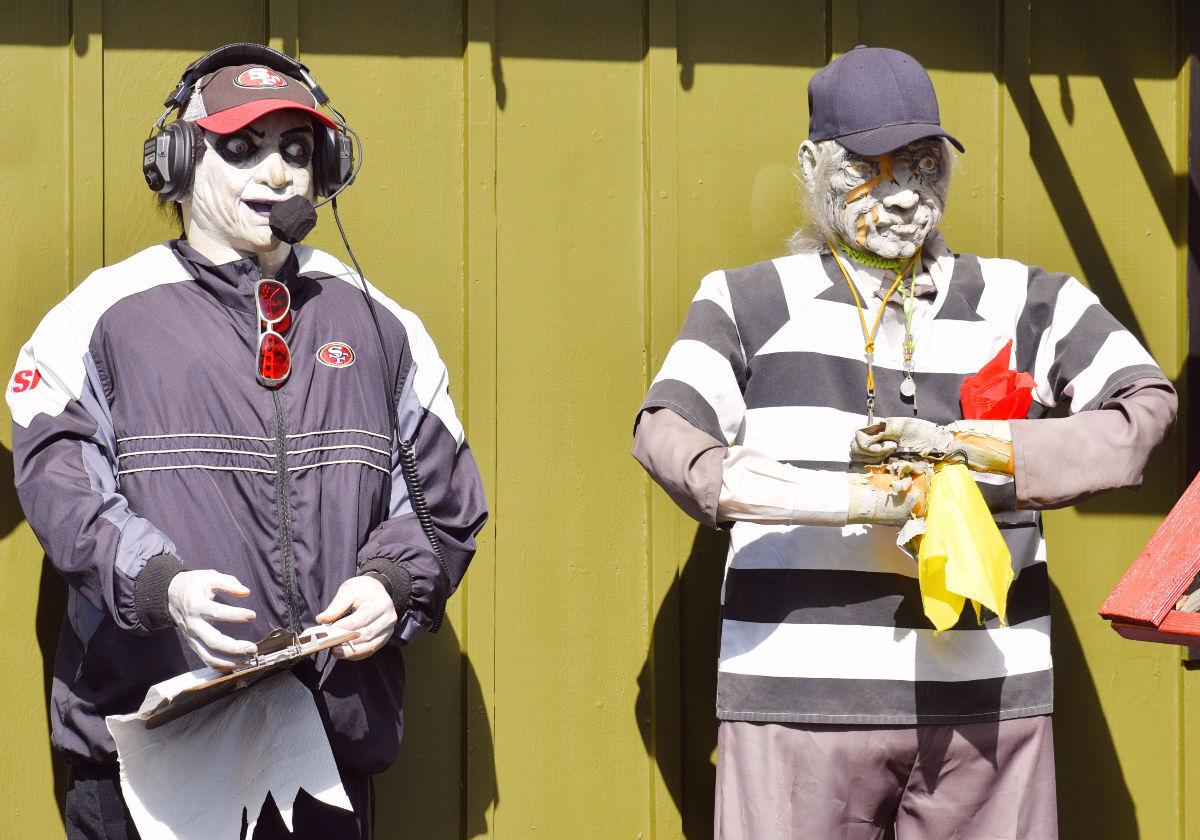 A ghoulish coach and zombified referee observe the game in the "NFL Boneyard" Halloween display at Wayne and Wendy Steller's home in Santa Maria. 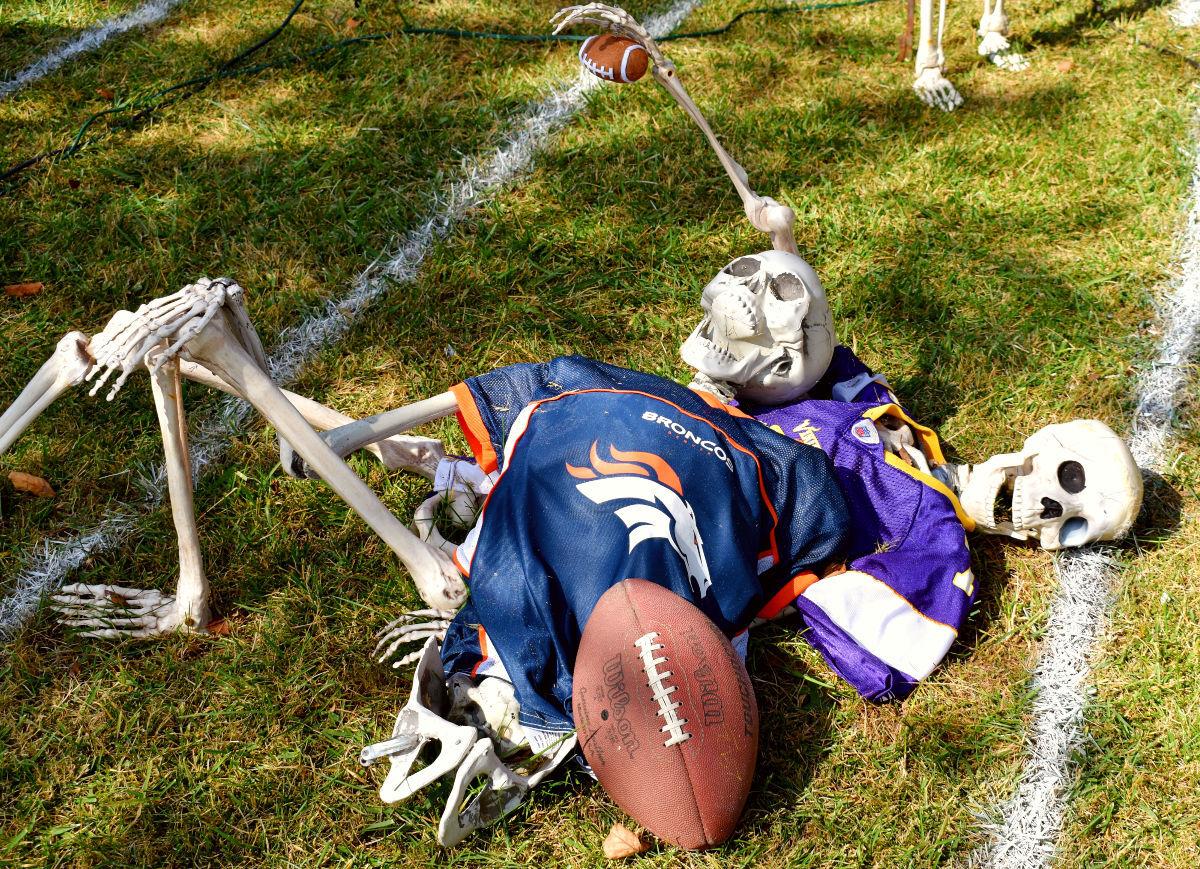 Oct. 31 was a “dark and stormy night” 24 years ago when Wayne Steller popped the question to girlfriend Wendy at “a big Halloween dance,” and she said “yes.”

Every year since then, the couple has celebrated that happy event by filling the garage and yard of their Santa Maria home with skeletons, corpses, zombies, the undead and the almost dead in displays that have drawn visitors from all over California and even from Nevada and Arizona.

They’ve had a “Haunted Ghost Town” — one of their favorites — as well as a “Haunted High,” “Married and Buried,” a hospital theme and a Christmas-Halloween mash-up.

This year, they’ve turned their front lawn into a gridiron for the “NFL Boneyard,” giving football fans a Pro Bowl-style game that’s likely to leave the players with more than one bone to pick.

“We didn’t know if the NFL would go this year, like a lot of other sports, because of COVID-19, so we decided to give people a football game to watch,” said Wayne, who with his wife scoured thrift stores to find enough uniforms to outfit the teams. “They’re actually kids’ jerseys. We didn’t spend a whole lot.”

Now there are players lined up head-to-head, throwing passes and tackles, down on the turf and injured on the sidelines, where a cameraman is shooting video and a sportscaster is doing a standup TV report.

The field has yard markers, goal posts, a therapy tub for the injured and, oddly enough, an outhouse.

“We’ve got a coach, a referee and a water boy,” said Wayne, who admits to being a 49ers fan, while Wendy roots for the Packers. “If you look on the gurney, from Kansas City is Patrick [Mahomes] all torn apart. Behind him are two players, defensive player [Nick] Bosa and the other is just an old 49ers jersey — I think it’s [Joe] Montana.

The Stellers change the theme of the displays every other year, because both work — appropriately — the graveyard shift at United Parcel Service and don’t have time to create a new one each year.

Wendy comes up with the theme, they both collect and prepare the props and Wayne builds the display in their backyard, usually starting in April. The detailed scene is then set up inside their garage.

But COVID-19 changed things this year. The scene is set up only on the lawn to keep people from congregating in the enclosed garage, and it’s a lot less detailed, Wayne said, noting he didn’t start working on this one until September.

They won’t be handing out candy to trick-or-treaters this year, either, so there’s no jar to collect donations that help offset that cost, he said.

They also didn’t put out the register where every year people sign their names, list where they are from and write complimentary comments.

“We didn’t want to leave a pen out that everybody would be handling and maybe passing along the virus,” Wayne said. “I do miss the comments, though, and I really do miss the [kids’] costumes.”

Still, the “NFL Boneyard” serves as this year’s reminder and celebration of that night 24 years ago when Wendy was dressed as a French maid and Wayne was dressed as a performer from Chippendale’s.

“It was a dark, rainy and stormy night, and there was this big Halloween dance in the ballroom of the Santa Maria Inn, so it was the Haunted Inn,” Wayne recalled. “We’d rented a room upstairs. I said, ‘Be right back,’ went up and put on a Darth Vader costume.”

The pass is complete.

“I’d carved this great big pumpkin with ‘Will you marry me?’ engraved in the outside,” he continued. “Inside the pumpkin was Princess Leia, and she had the ring around her neck.”

“The ballroom has this big curved staircase, and I came down the staircase,” Wayne said. “Everybody else knew what was going on, but she didn’t know it was me. … She said ‘yes.’ She said to tell everyone she said ‘no,’ but she said ‘yes.’”

To see the Steller display

Wendy and Wayne Steller’s “NFL Boneyard” is on display through Oct. 31 in their yard at 513 E. Mariposa Way, Santa Maria.

The display is illuminated on weeknights, but it also has music from 10 a.m. to about 9 p.m. on weekends, and there’s no charge to view it.

“We just want people to come out but, because of COVID-19, we hope they are wearing masks — not costume masks but face masks,” he said. “Just come and look and watch the football game.”

An Orcutt couple has come up with an easier way to build a treat delivery system than one made internet-famous by a guy in Chicago, and they’v…

Santa Maria residents can start getting into the holiday spirit with the nomination window opening Nov. 16 for this year's annual Lights, Sigh…

Wayne and Wendy Steller pause in front of their Santa Maria home decorated with an NFL theme in their elaborate annual Halloween display.

At night, the "NFL Boneyard" scene is illuminated in the annual Halloween display at Wendy and Wayne Steller's home in Santa Maria.

A ghoulish coach and zombified referee observe the game in the "NFL Boneyard" Halloween display at Wayne and Wendy Steller's home in Santa Maria.