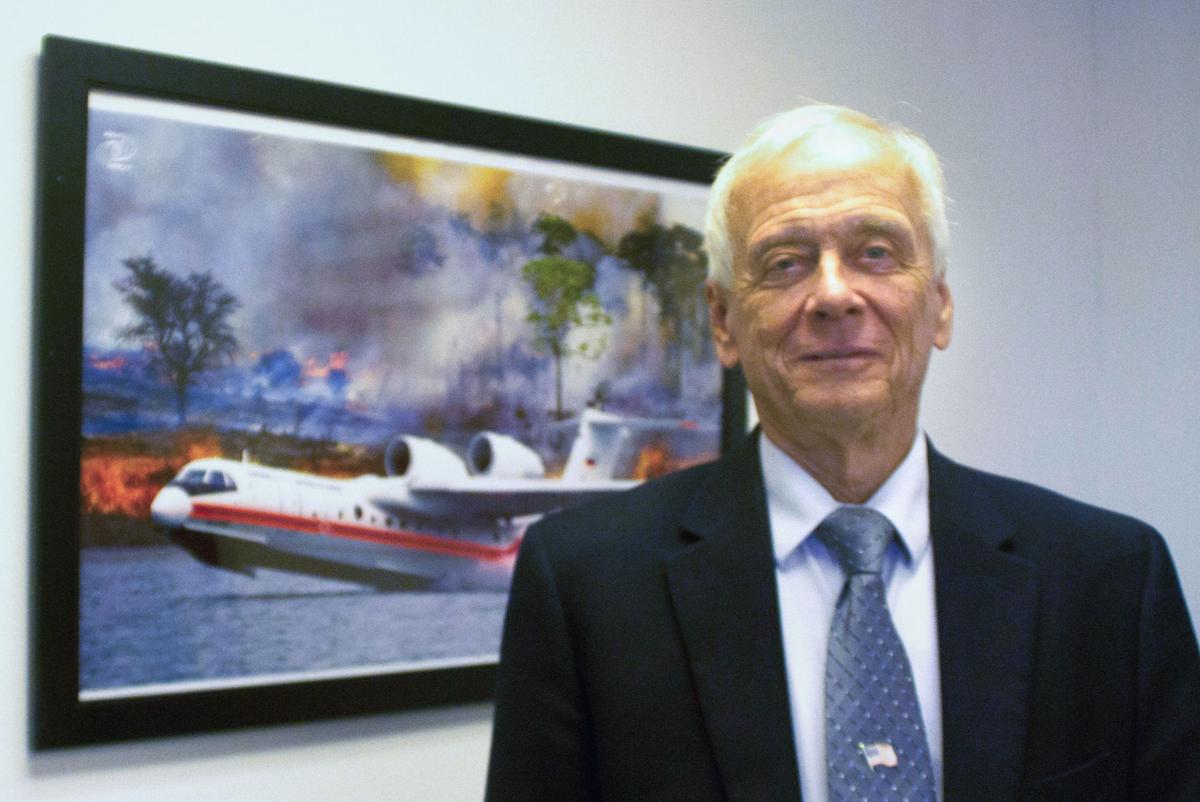 David Baskett stands in front of a photograph of a plane he and his partners want to produce in Santa Maria. 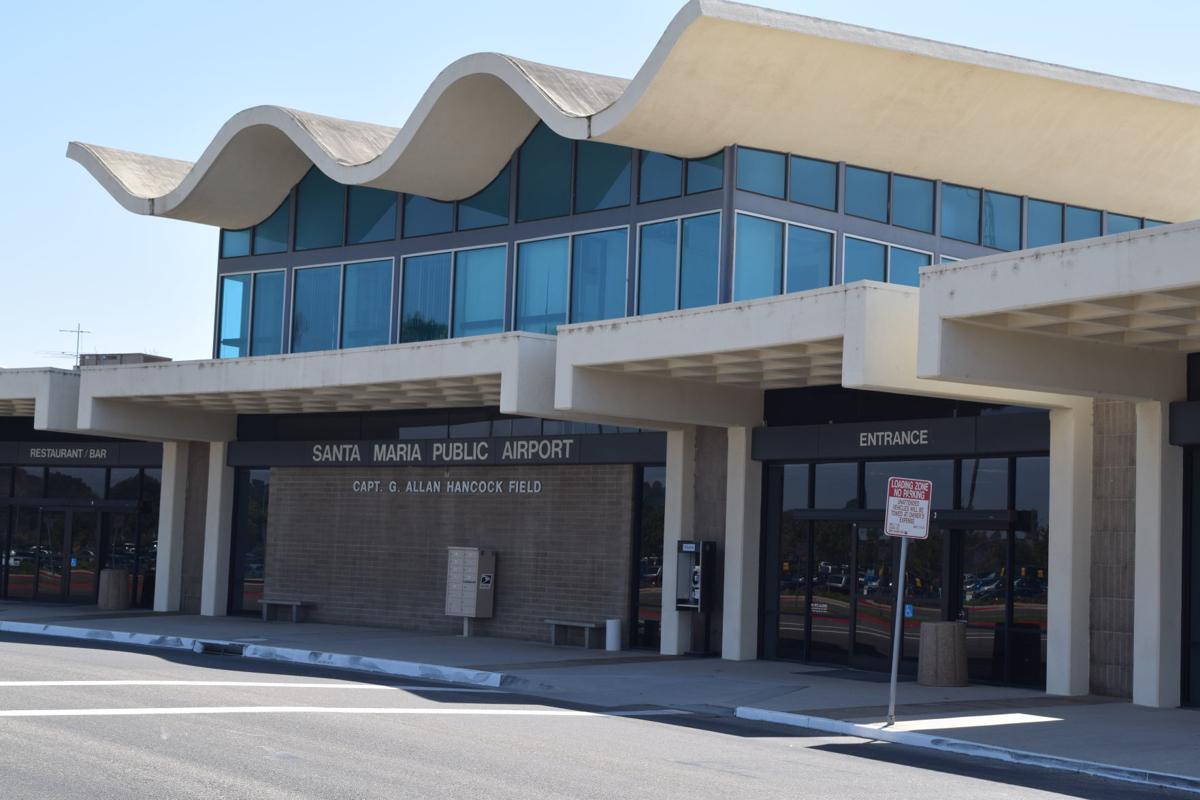 Santa Maria Airport District director David Baskett has filed defamation lawsuits against board Secretary Carl Engel, and Vice President Chuck Adams, over statements made during a Dec. 14 board meeting and in prior conversations.

He filed the two civil suits Aug. 7 with Santa Maria Superior Court accusing Engel and Adams, respectively, of defaming him in 2016 and 2017, and portraying him in false light to other officials.

Baskett, who was elected to the board in 2012, is representing himself and is seeking compensatory, exemplary damages to be determined by the court.

The suit filed against Adams states that during a Dec. 14, 2017, board meeting at the Santa Maria Public Airport, Adams told Baskett he should resign from his position because he had a conflict of interest.

Adams made the statement after reading a story published Dec. 9, 2017, in the Santa Maria Times in which Baskett discusses an offer of help from Russian officials that if finalized would stage Russian Beriev Be-200s at the airport to help fight California’s wildfires.

Baskett, who founded Santa Maria-based International Emergency Services, an aviation company, said in the article that officials from the Russian Federation’s Ministry of Affairs for Civil Defense, Emergencies and Elimination of Consequences of Natural Disasters (EMERCOM) and the U.S. Federal Emergency Management Agency (FEMA) were involved in discussions about Russia's offer of aid.

FEMA representatives denied that an offer of Russian assistance had been received.

The suit against Engel alleges defamation stemming from actions that occurred in August 2016, and states that Engel threatened to reveal private information about Baskett.

“I have information on you. I will publicly embarrass you and, further, very embarrass you, if you continue working with the airline,” Engel reportedly told Baskett during a closed session meeting of the board.

The suit states there is no proof Engel had such information about Baskett, and furthermore, the statements were false and harmed his reputation in the aviation community.

Engel, who was up for re-election in the Nov. 6 election, will automatically renew his term, instead, because no challenger filed to run against him by the Aug. 10 deadline.

As wildfires sweep across the state of California, Russian Federation officials have offered…

Baskett said the timing of the suits — nearly two years after Engel's alleged remarks, and seven months after Adams' comments — had nothing to do with the coming election. Rather, he said, he wanted to file Engel's complaint before the two-year statute of limitations on civil actions expired. The complaint against Adams was filed at the time same as an add-on, Baskett said.

"I hoped to settle this matter out of court, and I've conferred with both men before," Baskett said Thursday.

"I obviously don't relish doing this -- I love this airport and want things to run smoothly," he said.

When asked what he believed Adams meant by "conflict of interest," Baskett maintained that he has no idea, other than some assumptions Adams had about Baskett's aviation company.

"Sure, I want to bring planes here, but I'm very careful about that," Baskett said. "Anything I have businesswise that comes before the board at the SMX that may even be slightly connected with me, I recuse myself."

He said his comments in the Santa Maria Times article couldn't be seen as a conflict because the Russian offer was never brought to the Santa Maria Airport District board.

Board meeting minutes from Dec. 14, 2017, confirm that Adams suggested Baskett resign from the board. The suit elaborates, saying Adams stated "There are some things that disturb me lately. I look at the latest article in the Santa Maria Times about how we have the Russian fire jets coming here, Dave.

"… you are a part of [International Emergency Services], FEMA, we have a handshake agreement and when the media checks out your stories, it’s all a bunch of [expletive.] ... I think the reason you sit on the board is to feather your own hat."

Adams continued, "I feel that it would be a great service to yourself, which I will support you in, with your conflict of interest, I think you need to step down,'" the suit reads.

Baskett claimed in the suit that other people were present when Adams made the statements, and that the statements "have harmed [Baskett’s] reputation in the aviation community and his ability to do business.”

The suit further accuses Adams of malice, oppression and fraud, stating that his comments made Baskett feel “shame, mortification and hurt feelings,” and portrayed him in “a false light” to others.

The suits are not the first time Baskett has been involved in a legal battle with the Santa Maria Airport District board. According to court records, in September 2016 the Santa Maria Airport District sued Baskett over an unpaid loan -- $120,141.82, with 4-percent interest -- which he borrowed to start the now-defunct airline Pacific Skyway, which filed for bankruptcy in 2001.

In early September 2017 a superior court judge ruled in favor of the Santa Maria Airport District board but directed the parties to develop a payment plan out of court that would work for both sides.

Airport Manager Chris Hastert said Friday that Baskett has not yet set up a payment plan with the board.

"At this point there is no offer or discussions," Hastert said. "The Airport District is reviewing options on how to collect the money owed."

Listen to an audio recording of the exchange between members of the Santa Maria Airport board on Dec. 14, 2017 at santamariatimes.com

David Baskett stands in front of a photograph of a plane he and his partners want to produce in Santa Maria.