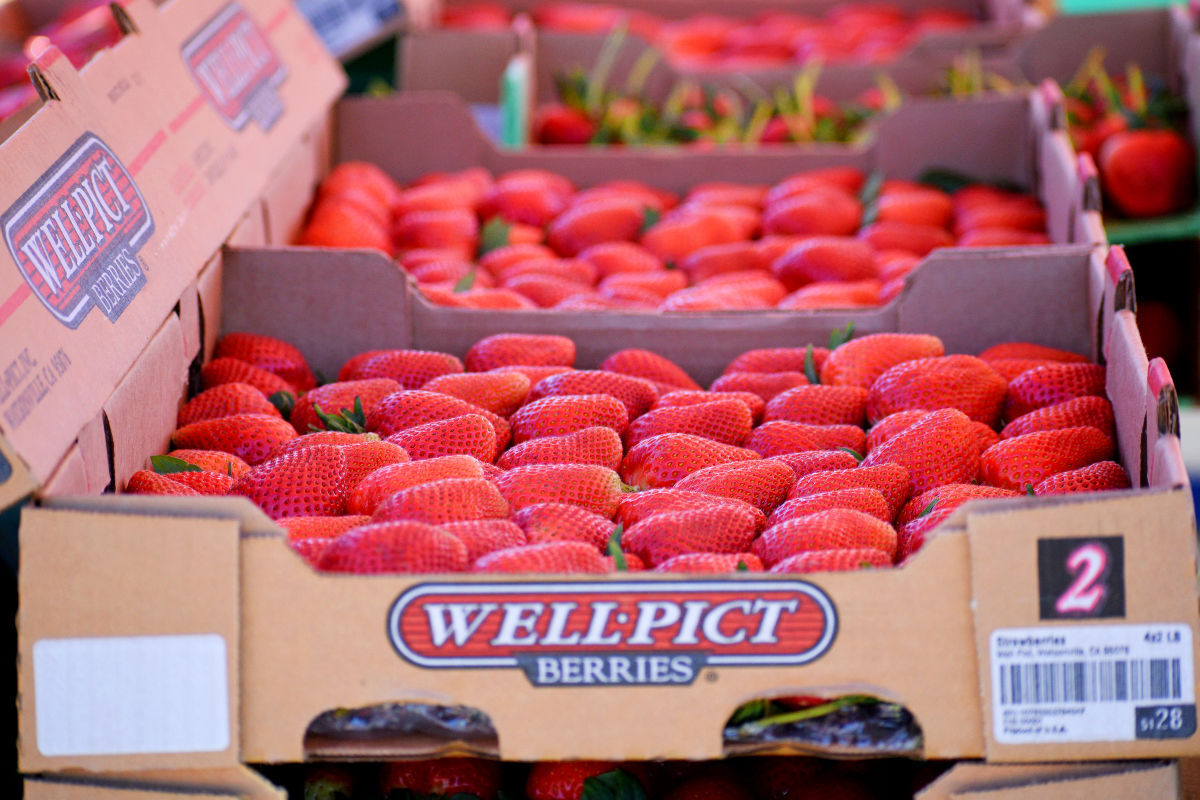 Fresh strawberries donated by local growers were available at the 2021 Santa Maria Fairpark on the first day of the Strawberry Cruzin' festival. 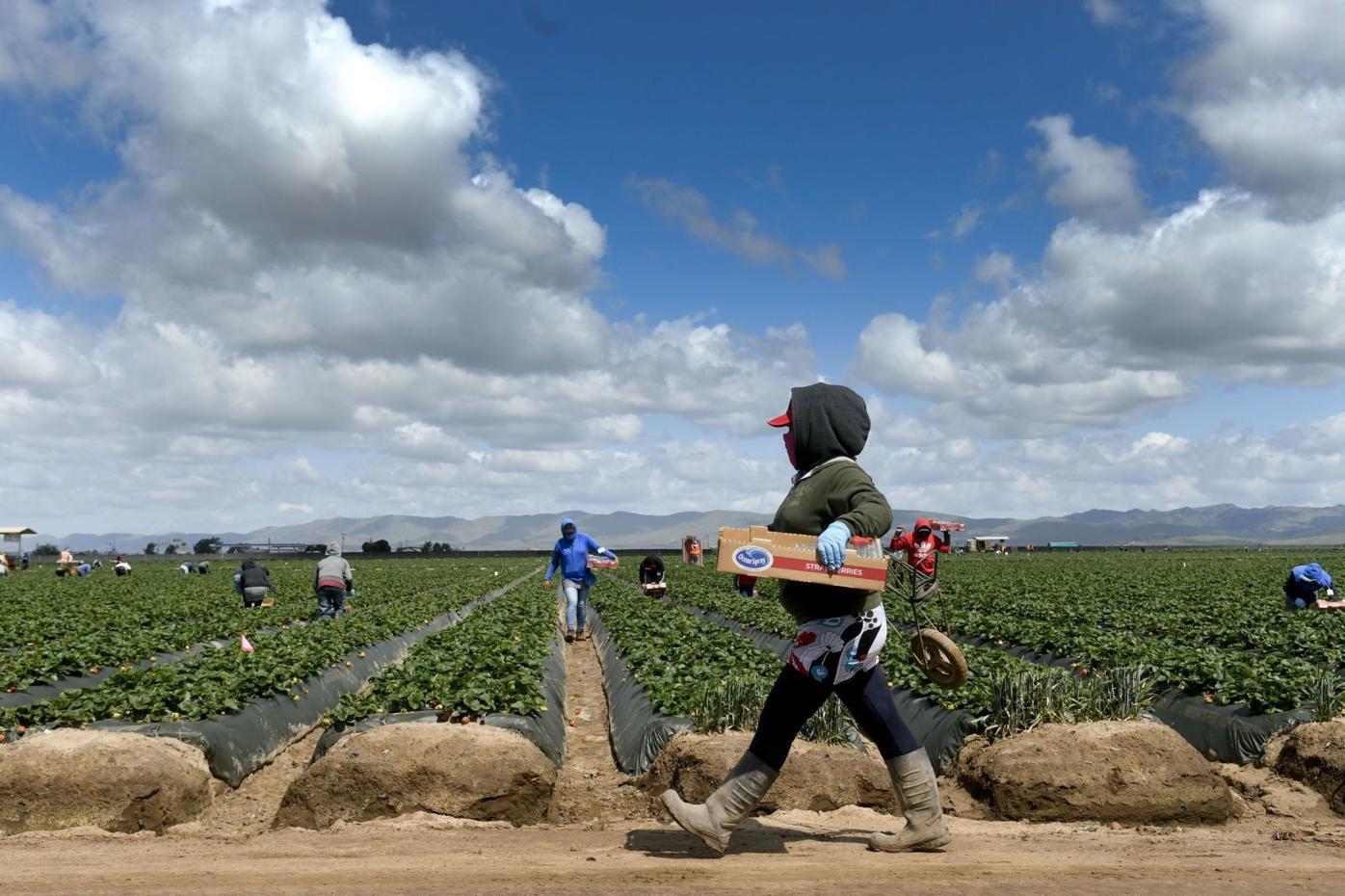 A farmworker carries a flat of freshly harvested strawberries at a field near Betteravia Road east of Highway 101 in Santa Maria in this photo from spring 2020.

Fresh strawberries donated by local growers were available at the 2021 Santa Maria Fairpark on the first day of the Strawberry Cruzin' festival.

A farmworker carries a flat of freshly harvested strawberries at a field near Betteravia Road east of Highway 101 in Santa Maria in this photo from spring 2020.

I had no idea strawberries were such a major crop in Santa Barbara County, and as I started researching, many questions arose: Why are the seeds on the outside of the berry and not on the inside like other fruits? Why are they called strawberries? Do they grow worldwide or just in the U.S.?

Today, China is the top producer of strawberries globally, producing 3 million tons a year, or 40% of the total. The United States is second with 1.4 million tons, of which California has 70%. Mexico, Turkey and Spain round out the remaining top five producers worldwide.

TRIVIA: If all the strawberries produced in California in one year were laid berry to berry, they would circle the Earth 15 times!

History of the strawberry

Strawberries grew natively in Asia, Europe, and North and South America. Africa, Australia and New Zealand are the only areas that strawberries did not initially grow. When the colonists arrived in Virginia, the Native Americans were using wild strawberries in many dishes. A special one was a pastry made with strawberries and cornmeal. The natives and early colonists did not bother cultivating strawberries because they were so abundant in the wild.

The colonists sent wild strawberry plants back to Europe, as the American strawberries were larger and better tasting than those in Europe.

Wine grapes fall to No. 5 in Santa Barbara County crop values, strawberries No. 1, cauliflower No. 2

Fast forward to 1714, when a French spy on a mission in Chili to get information on Spanish fortifications spotted some local strawberries that were very large. He brought the plants back to France and planted them near some of the strawberry plants from Virginia. The two varieties cross-pollinated, and the result was big, bright, tasty, plentiful berries that no one in the world had seen before. These plants, grown purely by accident, are the ancestors of all the strawberries grown commercially today.

Over the years, more research has led to the creation of hybrids with better flavor, production of more and larger berries, the ability to resist disease, etc. Still, all stem from the cross of their Virginia and Chilean ancestors. The botanical name for the strawberries of today is Fragaria x ananassa. The letter "x" in its name indicates that the modern strawberry is of hybrid origin and, in the case of our contemporary strawberries, of two different species — one from Virginia and one from Chili.

Botanically, the “fruit” of the strawberry is not a berry at all. Strawberries are part of the rose (Rosaceae) family. The fleshy, edible part of the plant is derived not from the plant's ovaries but from the receptacle that holds the ovaries. Each "seed" on the outside of the fruit is one of the ovaries of the flower. That is why the seeds are outside the berry, not within it as the seeds of actual fruits and berries are. When birds eat strawberries, they do not digest the seeds but pass them through along with their feces. When the seeds find fertile ground, they grow new plants with both the soil and fertilizer. That is why strawberries were so common in the wild.

How did strawberries get their name? One theory is that it originates from the fact that strawberry plants were often mulched with straw during the winter to keep the plants from freezing. Another idea is that strawberry is probably a corruption of "strewn berry" because the plants produced runners and spread. As a result, its berries were strewn about the ground. A third theory is that English children picked wild strawberries, impaled them on grass straws and sold them to the public. No one knows for sure, but today, strawberry it is.

For commercial production purposes, plants are grown from runners and, in general, distributed as either bare-root plants or plugs. Cultivation follows two general models — annual plasticulture or a perennial system of matted rows or mounds. Greenhouses produce a small number of strawberries during the off-season.

Most modern commercial production uses the plasticulture system. In this method, raised beds are formed each year, fumigated, and covered with plastic to prevent weed growth and erosion. Plants are planted through holes punched in this covering, and irrigation tubing is run underneath. Runners are removed from the plants as they grow to encourage them to put most of their energy into fruit development. The plastic is removed at the end of the harvest season, and the plants are plowed into the ground.

Because strawberry plants more than a year or two old begin to decline in productivity and fruit quality, the system of replacing the plants each year allows for improved yields and denser plantings. However, because it requires a longer growing season to allow for the establishment of the plants each year, and because of the increased costs in terms of forming and covering the mounds and purchasing plants each year, it is not always practical in all areas. (Our mild climate and long growing season favor this method.)

Judith Dale: The history of wine and its arrival in Santa Barbara County

The other major method, which uses the same plants from year to year growing in rows or on mounds, is most common in colder climates. This is because it has lower investment costs and lower overall maintenance requirements. However, yields are typically lower than in plasticulture.

The harvesting and cleaning process has not changed substantially over time. The delicate strawberries are still harvested by hand. Grading and packing often occur in the field rather than in a processing facility. To maintain top quality, berries are harvested at least every other day. The berries are picked with the caps still attached and at least half an inch of stem left.

Strawberries need to remain on the plant to fully ripen because they do not continue to ripen after being picked. Rotted and overripe berries are removed to minimize insect and disease problems. The berries do not get washed until just before consumption, so always wash your strawberries before eating, not only to get any dirt off but to rinse off pesticides. There are over 200 species of pests that can attach to strawberries.

Strawberries are very nutritious. They are 91% water, 8% carbohydrates, 1% protein and almost no fat. At only 33 calories per cup, strawberries provide 71% of the daily required vitamin C, 18% manganese, and small amounts of other essential vitamins and minerals such as folate, potassium, fiber and antioxidants.

The ancient Romans considered strawberries a medicine and used them to treat many health issues such as melancholy (depression), fainting, inflammation, fevers, throat infections, kidney stones, bad breath, gout and diseases of the blood, liver and spleen.

In the United States, by weight, strawberries are the fifth highest-consumed fresh fruit behind only bananas, apples, oranges and grapes. The annual per-person consumption of strawberries has increased steadily since 1970, from 3 pounds to over 6 pounds today.

Most people do not realize you can freeze fresh strawberries to eat later. First, wash the berries, hull them, lay them on a parchment-lined baking sheet so they are not touching, and freeze them until solid. Then, transfer the individually frozen berries to a freezer-safe zip-top bag and keep frozen for up to one year. We are fortunate here as we can get fresh strawberries year-round. However, I have found it is good to have some in the freezer to make that quick smoothie or ice cream topping.

It is no wonder that the strawberry was a symbol for Venus, the goddess of love, because of its heart shape and red color — let alone its sweet taste. We are fortunate to have fresh strawberries year-round. Enjoy them, as where else can you get great taste and excellent nutrition for so few calories, all while supporting our local farmers?

Such a win-win food. Enjoy!

Judith Dale: Highway 101 and its history as our economic artery

Historically, sections of the El Camino Real was built by the Spanish to connect the 21 California missions. However, parts of it followed original Native-American routes used for thousands of years before the Spanish...

The 1969 Santa Barbara oil spill became a flashpoint for the founding of the environmental movement.

More in Learn more about Santa Barbara County's history, landscape, and traditions from Judith Dale with these 26 stories (2 of 26)

Learn more about Santa Barbara County's history, landscape, and traditions from Judith Dale with these 26 stories