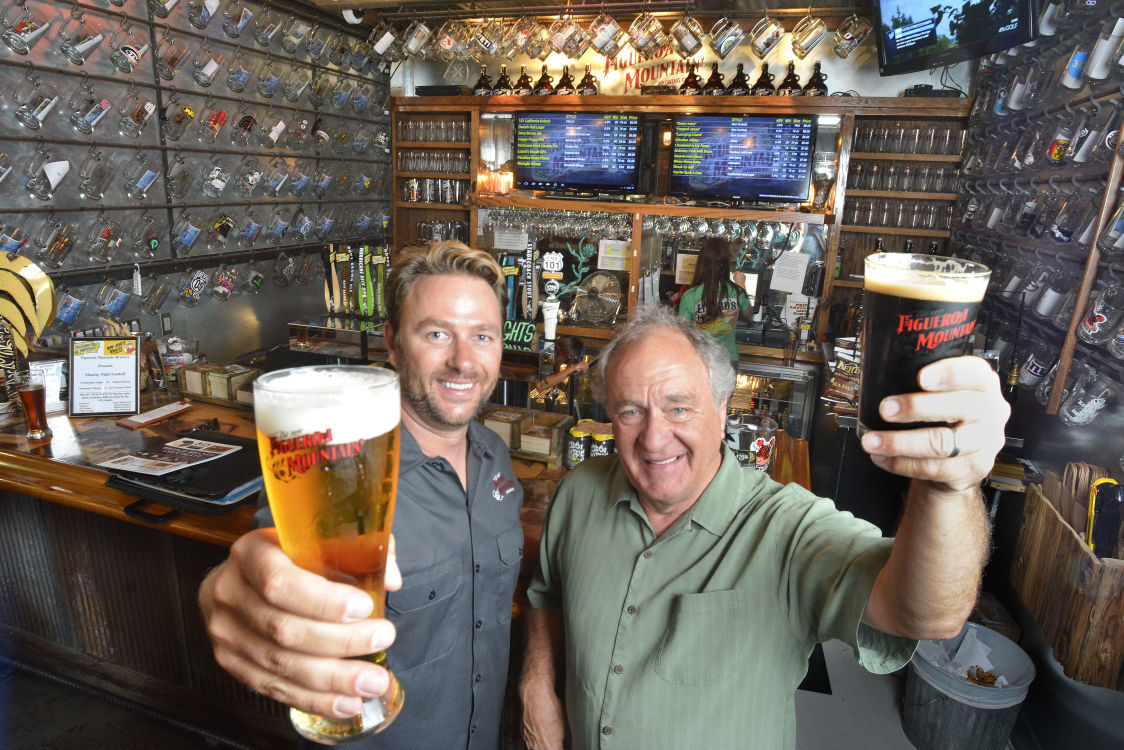 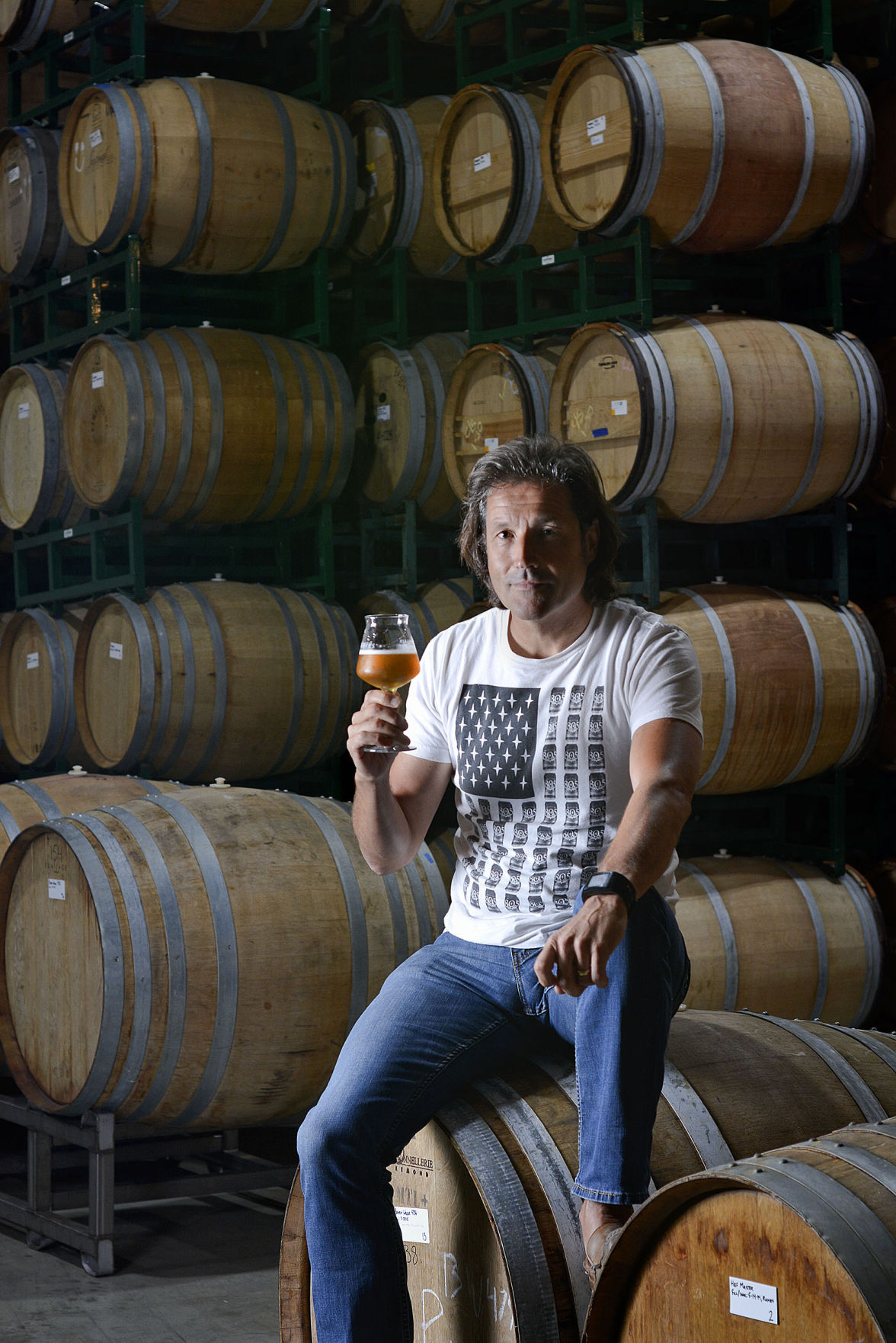 David Walker, of Firestone Walker Brewery, shows off a beer in the Barrelworks at the Buellton Taproom. 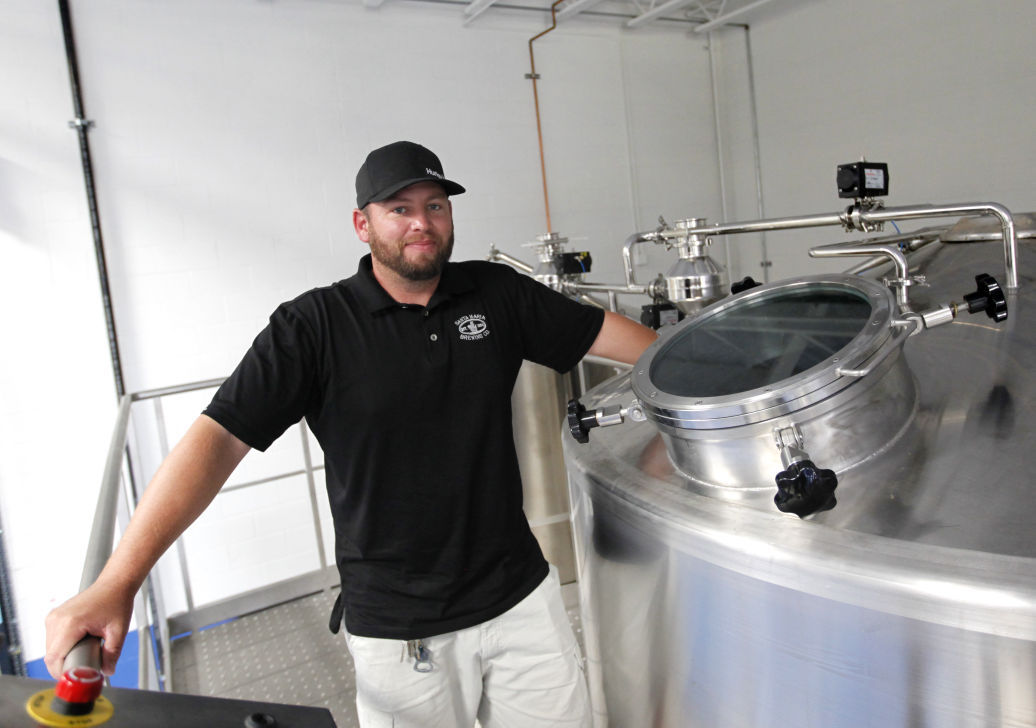 Santa Maria Brewery assistant brewer Bryan Fortin at the company’s new production facility on Fairway Drive. The craft brewery is set to start making beer there within the next few weeks and a tasting room will open there in a few months. 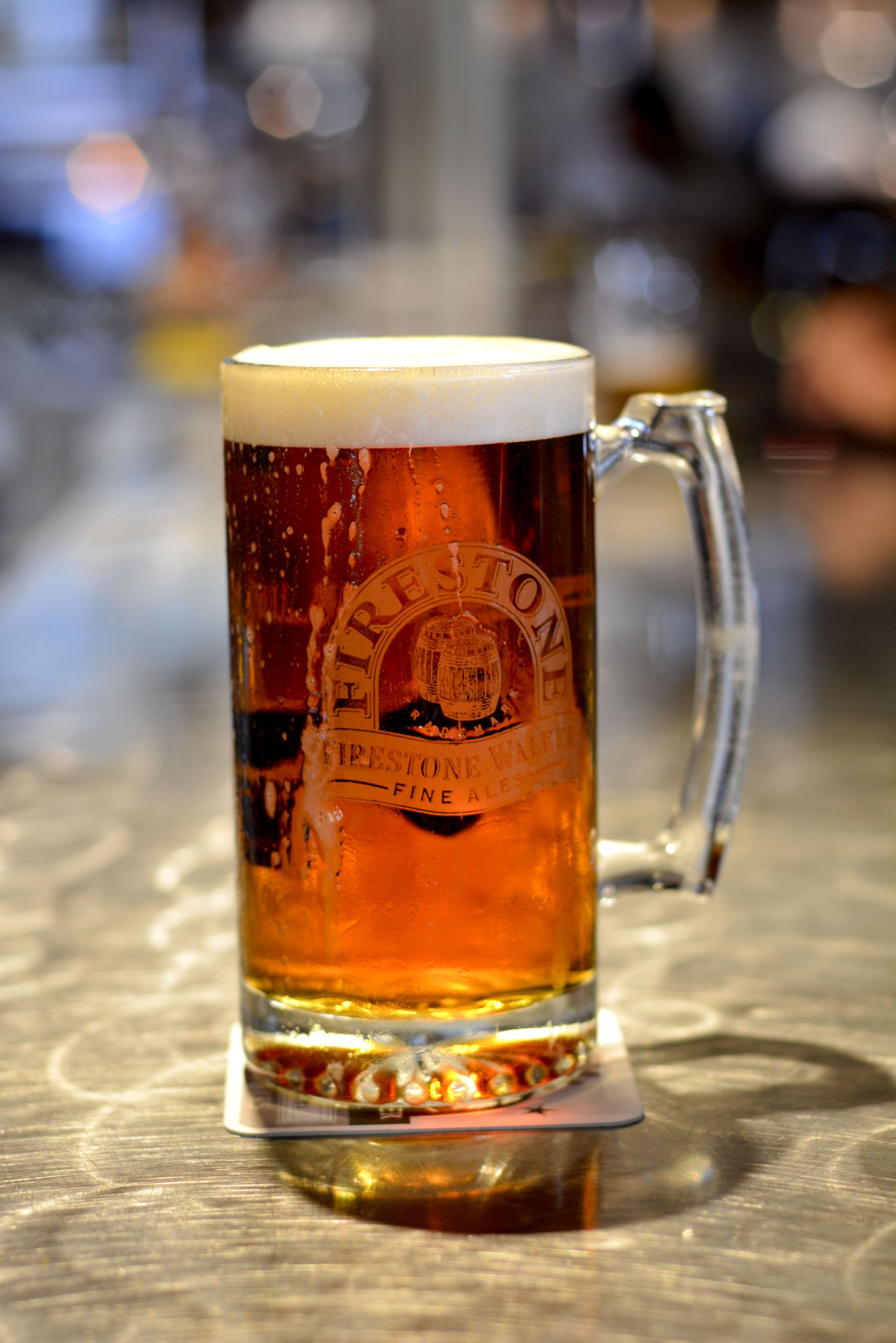 beer rests on the counter at the Buellton Taproom. 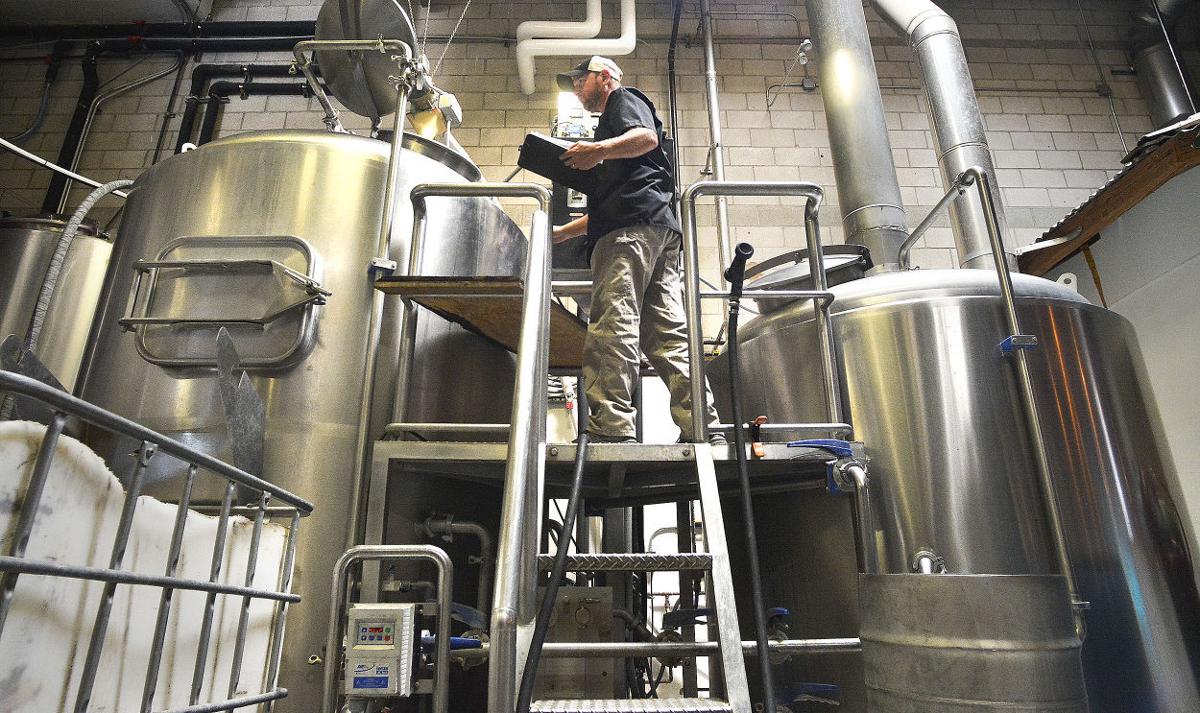 : Mike Hastings, director of brewing operations, checks on a Hurricane Double IPA that beer makers are fermenting at Figueroa Mountain Brewing in Buellton.

A Firestone Walker Hammersmith Double IPA beer rests on the counter at the Buellton Taproom. 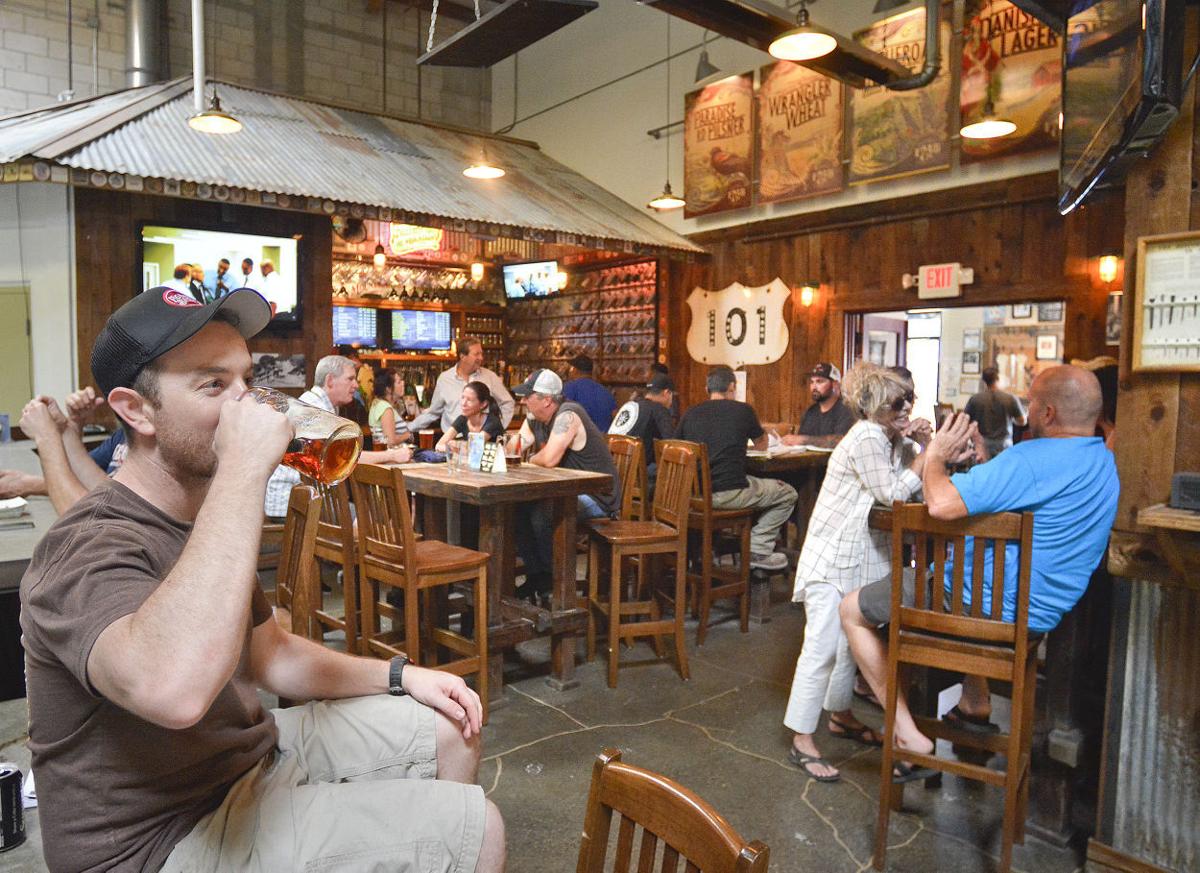 Nic Bortolin samples his results at the taproom in Buellton. 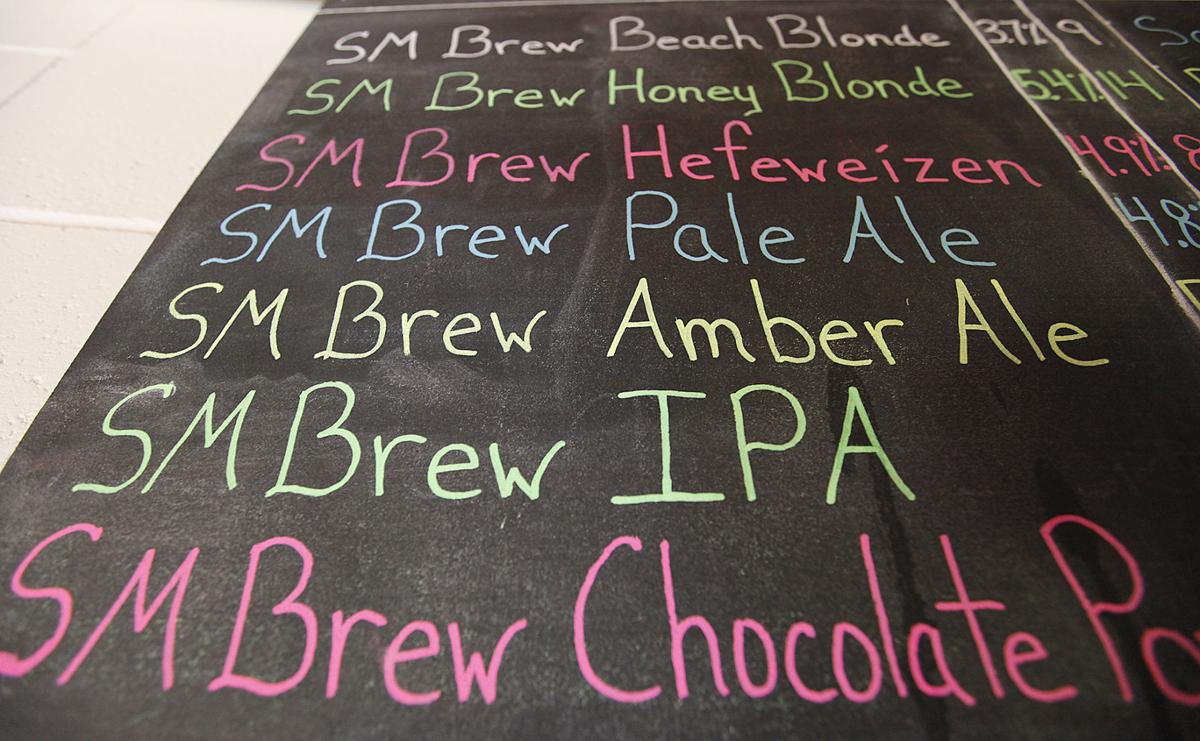 A list of some of Santa Maria Brewery beers on tap at their taproom in Nipomo.

While the region has long been known as a destination spot for wine tourism, craft brewing in the county has been growing at a rapid pace in recent years. There are 10 craft breweries in the county today, and just that many years ago there were only two, according to the May 2015 North Santa Barbara County Economic Summit report.

According to the Brewers Association, a national group for professional and home brewers, a craft brewer is small and independent, producing no more than 6 million barrels per year, with the beer's flavor derived from traditional or innovative brewing ingredients and their fermentation process.

Craft breweries are on the rise nationwide as well, with production growing by 15 percent per year for at least the past five years. Production at county breweries has also been high, with an annual growth rate between 20 to 50 percent for the past five years. The national trend is particularly prominent in California, which is the largest producer of craft beer in the nation with 381 craft breweries and nearly 3 million barrels of craft beer produced in 2013.

Bart Watson, chief economist for the Brewers Association, said that 75 percent of American adults who are 21 and over now live within 10 miles of a craft brewery.

Firestone Walker Brewing Company is the uncontested giant of the Central Coast craft beer scene, but when it was first established in the Santa Ynez Valley in 1996, co-owner David Walker said that there was just one other craft brewery — Santa Maria Brewing — in the county at that time. A lot has changed since then.

"We started one of the first craft breweries in the area and now we're the fourth largest in California," Walker said.

While Firestone Walker's main brewing operations moved north to Paso Robles in San Luis Obispo County in 2001, their sour beers, which are made to have an intentionally acidic, tart or sour taste, are aged at their BarrelWorks facility next to their Buellton taproom. Their beer is distributed across the state and country. Firestone Walker's 805 honey blonde, which makes up 45 percent of its sales, is now a top 30 craft beer brand in the country, Watson said.

Paul Wright, owner of Carpinteria's Island Brewing, specifically moved from the Bay Area and opened the doors to his brewery in the county in 2001 because he saw the area as an untapped market for craft beer.

"At the time, I felt that it would have been a little cutthroat to open a brewery in the Bay Area," Wright said. "The beer scene is happening in this area now, though."

Just five years ago, local father and son duo Jim and Jaime Dietenhofer founded Figueroa Mountain Brewing with their production facility in Buellton. There are a now a total of four taprooms across the county. They recently made the the Inc. 5000 list as the fastest-growing craft brewery in the country.

Jaime said he fell in love with the craft brewing scene in Southern California and wanted to bring that back to his home region. Many of their beers from Danish Red Lager to their Paradise Road Pilsner are a nod to various aspects of the region.

"This is our home and it’s something we’re passionate about," Jaime said.  "To eventually come back home to start a regional brewery is a big deal."

Peter Rupert, executive director of the UCSB  Economic Forecast Project, said that while there are about 10 craft breweries in the county now, there could be at least 20 in just a few years.

"These breweries are growing fast," Rupert said. "The current facilities will produce a lot more. Certainly in the next three to five years, a doubling of the current number of breweries wouldn't be out of the question."

One reason craft breweries are sprouting like weeds across the state is that California allows brewers to self-distribute their product with no regulations. Rupert said this helps craft breweries cut costs when they're first starting out. Distributors typically take a minimum cut of 25 percent of the sales price.

"You can start this in your garage initially, and then you get a little bigger," Rupert said.

California is one of only 14 states in the country that allow brewers to self-distribute with no restrictions. While some craft breweries like Firestone Walker eventually outgrow the self-distribution model, smaller operations like Island Brewing use it to their advantage. Island Brewing sells beer directly to bars, restaurants and retailers throughout the county while avoiding steep distributor costs.

Wright said that being able to self-distribute and having a taproom on site is key for small breweries. He also said that unlike other states, California doesn't impose limitations on breweries such as how many glasses of beer can be served per person or limiting the hours of operation.

"Generally, the beer laws in California are a lot better than the rest of the U.S.," Wright said.

While more breweries continue to pop up in the county, the existing breweries look to expand.

Santa Maria Brewing, which was founded in 1994, will produce beer at a production facility within its namesake city's borders for the first time in a few weeks when things get going at their Fairway Drive brewery. A tasting room also will open on site within the next few months.

Santa Maria Brewing beer is currently contract-brewed by a company in Irvine. Watson said that isn't necessarily the norm for breweries to start off having their product made by another company but that it's something some brewers initially do to build up a client base for their beer while they secure the necessary funds for their own production facility.

“We’re really excited," Assistant Brewer Bryan Fortin said. "It’s been a couple of years of struggles getting the brewery in here."

Island Brewing is currently in the process of expanding its existing brewery and tasting room to make it 40-percent bigger.

Meanwhile, the Solvang Brewing Company, which prides itself on its ale varieties, is looking to expand its business with a new location in Lompoc, capable of brewing 50,000 barrels annually.

The project hopes to serve as an anchor to Old Town Lompoc and will include a restaurant called Hoptions, along with retail space, in addition to its new brewery. The business will retain its existing location in Solvang on Mission Drive.

Figueroa Mountain recently opened a taproom and restaurant in Arroyo Grande, in San Luis Obispo County. An expansion of its Santa Maria restaurant to include a stage for live music is also in the works, and the father-son team will roll out a new label, Liquamentum, in 2016 that will focus on small volumes of mixing the finest local ingredients with quality craft beer. Possible beers for the label could include hybrids such as beer and wine blends, barrel-aged ales and more.

Similarly, Firestone Walker will open Propagator, a beer test kitchen of sorts in Venice Beach at the end of this year.

Taking IPAs out of the USA

While various breweries start in their home town and then look to expand their grasp across California, some local brewers have set their sights a little farther.

Figueroa Mountain is looking to open a brewery in the Munich area of Germany. Jaime said the craft beer scene across the pond is similar to what was happening in America 10 to 15 years ago, which makes it an ideal time to get in. Jim said that it's also just better to make craft beer where you plan to sell it.

"Craft beer is delicate," Jim said. "You can’t leave it around for a long time. You simply have to brew over there to be successful."

"We’re German, so we’re going back to the homeland," Jaime said.

Their Lizard's Mouth IPA took gold this year at the Meininger International Craft Beer Awards in Germany, which is a good indication that Europeans just might be thirsty for some American-style IPAs. IPAs, or India Pale Ales, are the darling of the craft beer industry and are characterized by an abundance of hops and a higher alcohol content. San Diego-based Stone Brewery, an IPA powerhouse, will also break into the German craft beer market with a brewery opening in Berlin in 2016.

“The Americans are coming," Jaime said.

With more than 100 craft breweries, the San Diego area claims the title of California beer king. But where will the next spot for beer connoisseurs be?

With tourists already flocking to Santa Barbara County for the beaches, hiking and wine, Jim and Jaime said that the area is ripe for an expansion of craft breweries.

"There’s an attention to craft that has led with wine," said Figueroa Mountain's Jaime Dietenhofer. "That has definitely helped pave the way to have that affinity for craft beer. This county is very conducive to craft, in general, from craft beer to food to wine."

Watson said there has been a noticeable increase in beer tourism and Santa Barbara County is already a tourist destination.

"I'm guessing you'll start to see some breweries trying to draw tourists in as part of their business model," Watson said. "People are now attracted to certain spots because of the breweries in the area."

The Dietenhofers and Watson also pointed to the state's Central Valley as a spot where craft beer could take off, pointing out lower rental costs and a lack of breweries in that area.

Wherever breweries may boom, Walker said there's something about that California golden touch that makes beer made here simply sell itself.

"California is a great brand," Walker said. "It's an exportable brand. Whether it's wine, beer or clothes, the world has been sort of calibrated to all things California. And I'm English, so I'm not biased."

Fall starts in Santa Maria with beer, wine and arts

Craft brewing in Santa Barbara County has been growing at a rapid pace in recent years. There are about 10 craft breweries across Santa Barbar…

David Walker, of Firestone Walker Brewery, shows off a beer in the Barrelworks at the Buellton Taproom.

Santa Maria Brewery assistant brewer Bryan Fortin at the company’s new production facility on Fairway Drive. The craft brewery is set to start making beer there within the next few weeks and a tasting room will open there in a few months.

beer rests on the counter at the Buellton Taproom.

: Mike Hastings, director of brewing operations, checks on a Hurricane Double IPA that beer makers are fermenting at Figueroa Mountain Brewing in Buellton.

A Firestone Walker Hammersmith Double IPA beer rests on the counter at the Buellton Taproom.

Nic Bortolin samples his results at the taproom in Buellton.

A list of some of Santa Maria Brewery beers on tap at their taproom in Nipomo.