Santa Barbara County firefighters to be trained in pet first aid, rescue
Share this
{{featured_button_text}}
1 of 3 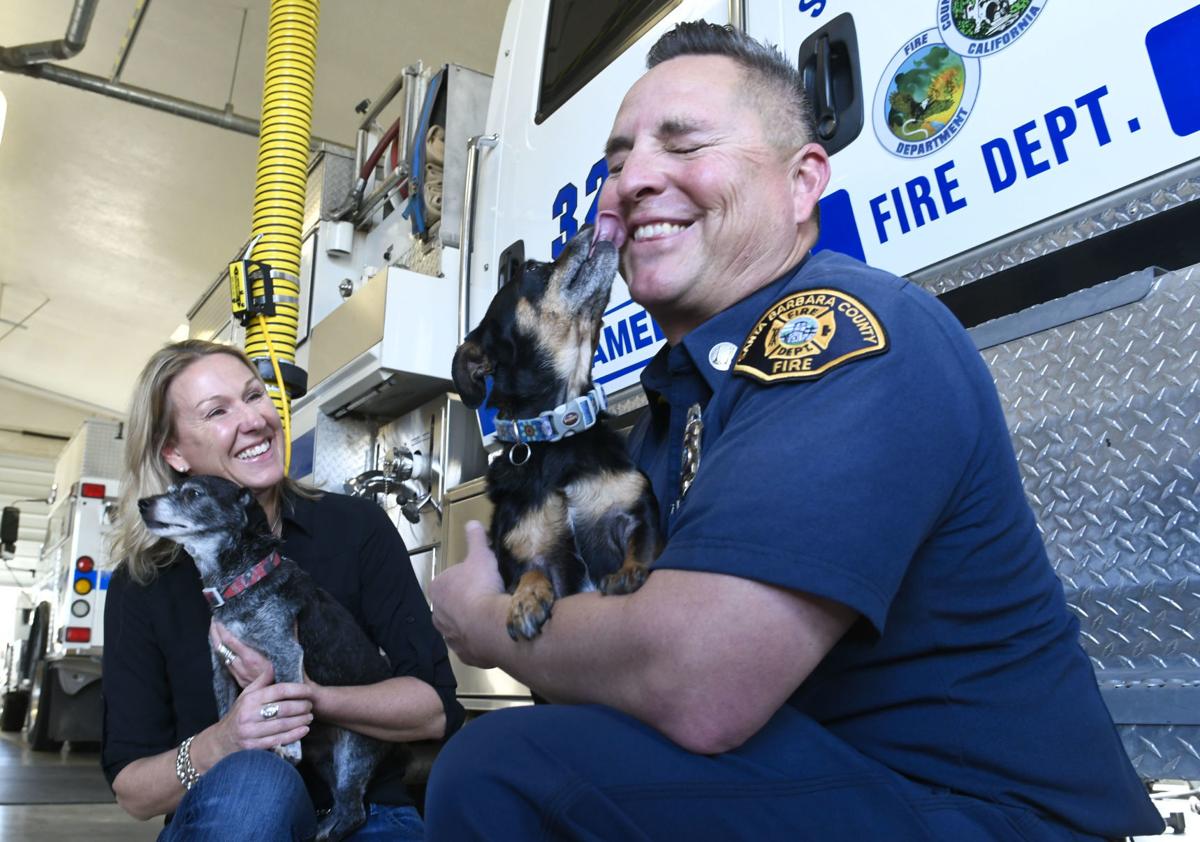 Santa Barbara County Fire Capt. Cesar Martinez gets a kiss from Penny as her owner, Isabelle Gullo, holding Eddies, watches during a visit to Station 26 in Orcutt. Gullo is executive director of C.A.R.E.4Paws, which is providing Pet Emergency Training for First Responders workshops to county firefighters. Both dogs attend the workshops that cover animal behavior as well as pet first-aid to prepare first responders to safely care for and treat pets in emergency situations. 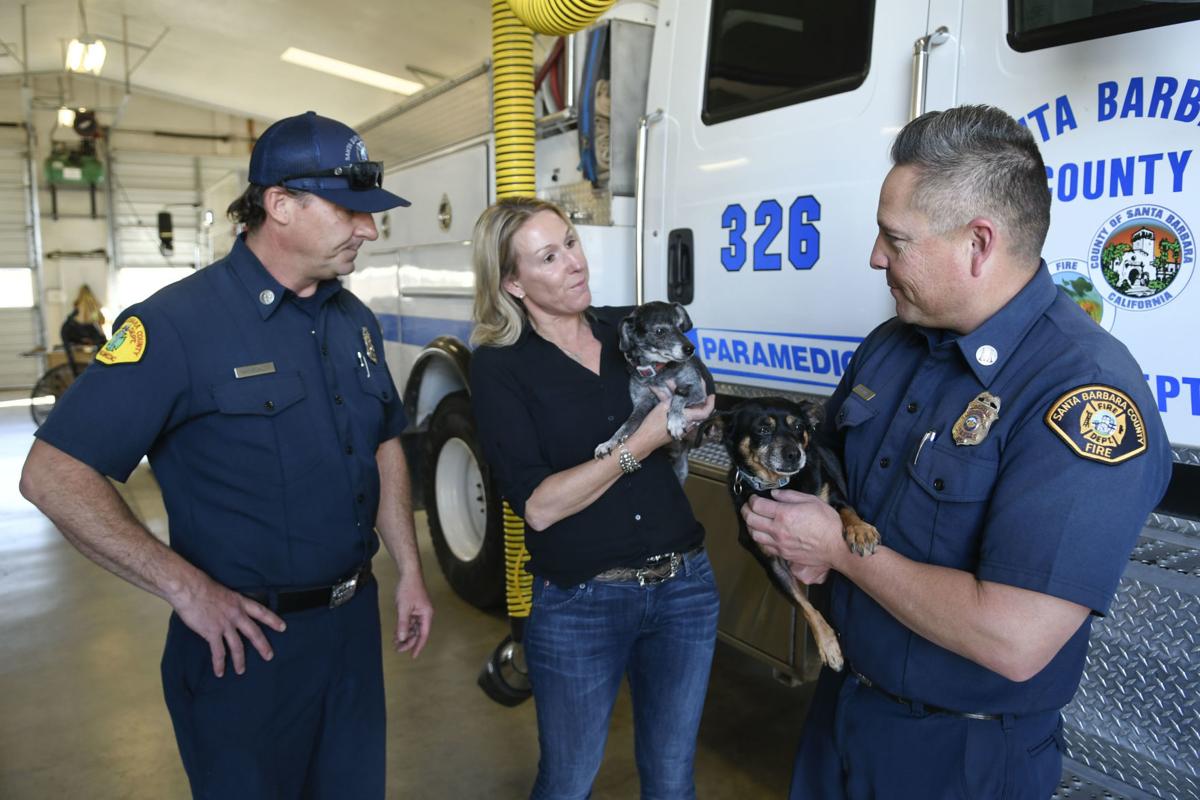 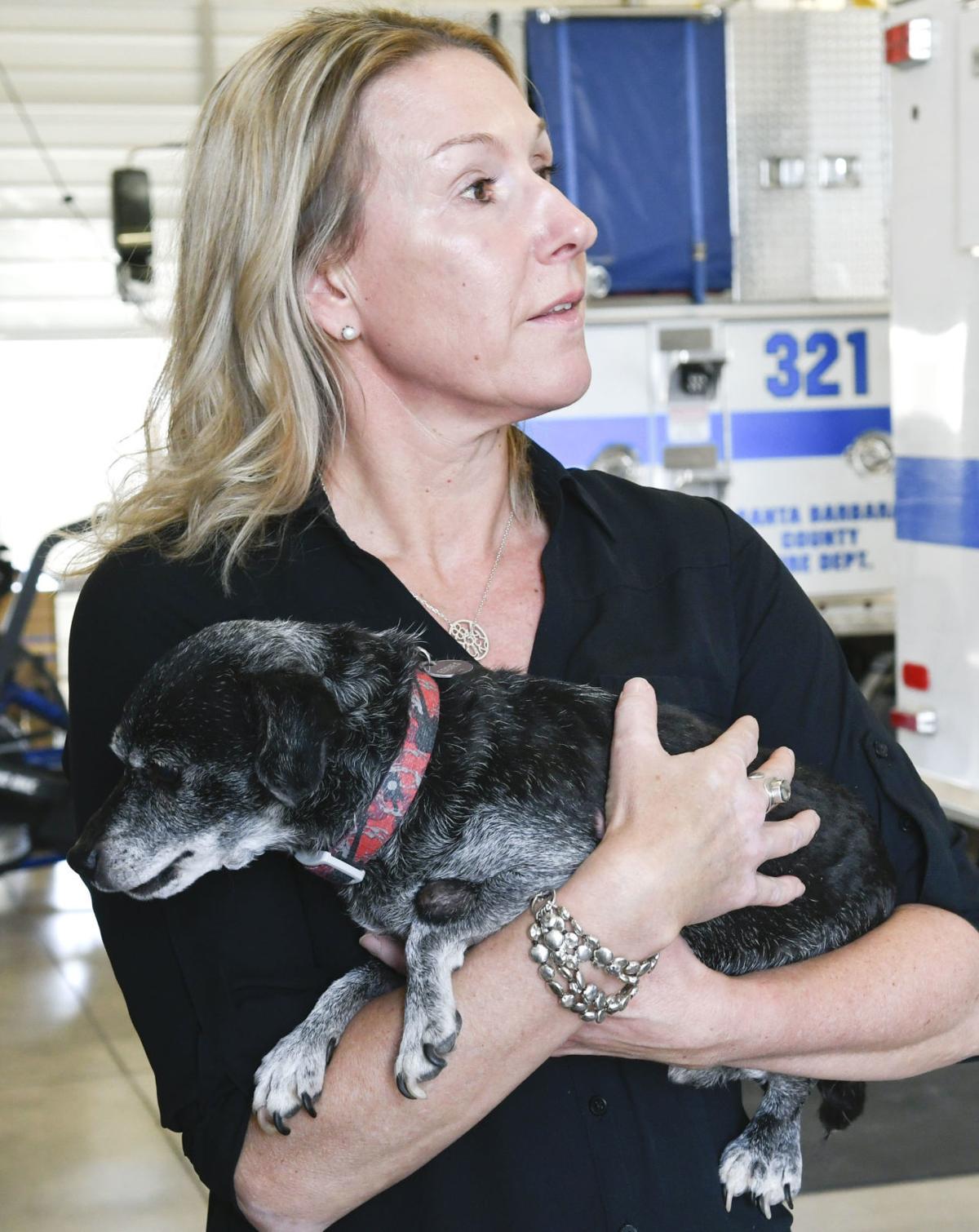 Isabelle Gullo, executive director of C.A.R.E.4Paws, holding Eddies, is coordinating a Pet Emergency Training, or PET, for First Responders series of workshops to teach county firefighters how to safely care for and treat pets in emergency situations.

Santa Barbara County firefighters will soon be better prepared to deal with injured pets they encounter after they receive training in a series of workshops that started Monday in Orcutt.

Gullo said one out of four animals that die from life-threatening injuries would survive if just one first-aid technique was applied before the pet reached a veterinary hospital, according to American Animal Hospital Association.

But firefighters, rescue personnel and even paramedics and emergency medical technicians who are usually the first to arrive at a fire, crash or other emergency, are generally not trained to provide medical treatment to pets, she said.

The sound of children talking, yelling, squealing and laughing poured from the white van as it rocked on its axles in front of Jonata School.

So last November, the nonprofit organization launched Pet Emergency Training, or PET, for First Responders to teach them how to safely care for and treat pets they encounter in emergency situations.

In the workshops, firefighters will learn how to recognize animals’ injuries, determine their severity and provide appropriate initial treatment before they can be picked up by officers from the Division of Animal Control.

“When a cat is burned, you can’t tell how badly injured it is until a couple of days later,” Gullo said. “By then, the organs are already shutting down.”

In addition to recognizing injuries and their severity, Dr. Andrea Wells, owner of Advanced Veterinary Specialists and an internal medicine specialist, said firefighters will receive at least an hour of hands-on medical training.

One dog’s animosity toward a mail carrier has led to the suspension of mail delivery for dozens of homes in a northwest Santa Maria neighborhood. The suspension began June 6 after the dog charged at a United States Postal Service carrier who was delivering mail to a neighboring home, according to Postal Service spokeswoman Meiko Patton.

“Immediate care and stabilization can be key to a successful recovery from injury,” Wells said.

The hands-on training will range from animal CPR, wound treatment and handling of broken limbs to how to provide fluids and other critical care to an overheated animal.

“We’re more involved with dogs injured in vehicle accidents than structure fires, so that’s very helpful for me,” said Capt. Cesar Martinez of County Fire Station 26, formerly Station 22, at the corner of Tiffany Park Court and Stillwell Avenue in Orcutt.

Firefighters will get to practice the various techniques with dogs and cats owned by Advanced Veterinary Specialists staff members.

On the road with Santa Barbara County Animal Services: Officer deals with strays, reflects on changes over years

During a visit to Station 26 on Friday, Gullo told Martinez and Capt. Lenny Maniscalco, from Station 30 in Solvang, that many of the procedures can be performed with equipment firefighters already use.

But she noted special pet first-aid kits are being prepared for firefighters to carry on every truck.

“They will have pet CPR masks of different sizes, things like that,” she said.

Most cats and dogs act differently when injured or in distress, so the animal trainer will provide techniques for safely capturing, handling and restraining pets to ensure they receive medical treatment or remove them from a dangerous situation.

The Santa Barbara County Fire Department on Thursday was awarded a $70,000 grant from the California Office of Traffic Safety to purchase extrication equipment.

Glen also will talk about dog psychology and how to deal with protective or aggressive dogs that can harm a first responder and prevent a pet owner from receiving timely critical care.

“Often we run into cases where [injured] people have got animals,” Maniscalco said. “That would help us understand in body language what [the animals] are feeling.”

Firefighter Sam Dudley, who’s assigned to Station 12 in Goleta, said the pet rescue training is a great opportunity for the department and the public.

“I think we recognize, as firefighters, these furry friends of ours are like part of the family,” he said. “We’re very excited to add another tool to our toolkit to serve the public.”

Dudley noted the training will have a dual benefit.

The Santa Barbara County Fire Department is preparing for the 2019 “high fire season” by increasing the number of vehicles and firefighters that respond to vegetation fires.

“Aside from being able to help the public, the department has two canines and we’re getting a third,” he said. “One is a live search dog — it searches for live individuals. One is an arson dog, an accelerant dog, that looks for evidence of arson.

“The suicide rate in fire departments is the same as — if not slightly higher than — it is in the military right now,” he said. “It’s become a real problem. County Fire understands the importance of having these emotional support dogs.”

Dudley said if one of the department’s three canines should be injured while in the field, firefighters will be able to use what they’ve learned in the workshops to treat the dogs and potentially save their lives.

A dramatic vehicle rescue captured in a photograph taken by a Santa Barbara County firefighter in 2012 was featured in a commercial that aired during Sunday's Super Bowl and yielded a $1,500 donation to the Fire Department.

The Santa Barbara County Fire Department on Tuesday announced the implementation of its ninth Remote Automated Weather Station (RAWS) in Santa Barbara County. The newest RAWS unit is set to be installed in the Purisima Hills area near the Burton Mesa communities of Vandenberg Village, Mission Hills, and Mesa Oaks.

Santa Barbara County Fire Capt. Cesar Martinez gets a kiss from Penny as her owner, Isabelle Gullo, holding Eddies, watches during a visit to Station 26 in Orcutt. Gullo is executive director of C.A.R.E.4Paws, which is providing Pet Emergency Training for First Responders workshops to county firefighters. Both dogs attend the workshops that cover animal behavior as well as pet first-aid to prepare first responders to safely care for and treat pets in emergency situations.

Isabelle Gullo, executive director of C.A.R.E.4Paws, holding Eddies, is coordinating a Pet Emergency Training, or PET, for First Responders series of workshops to teach county firefighters how to safely care for and treat pets in emergency situations.