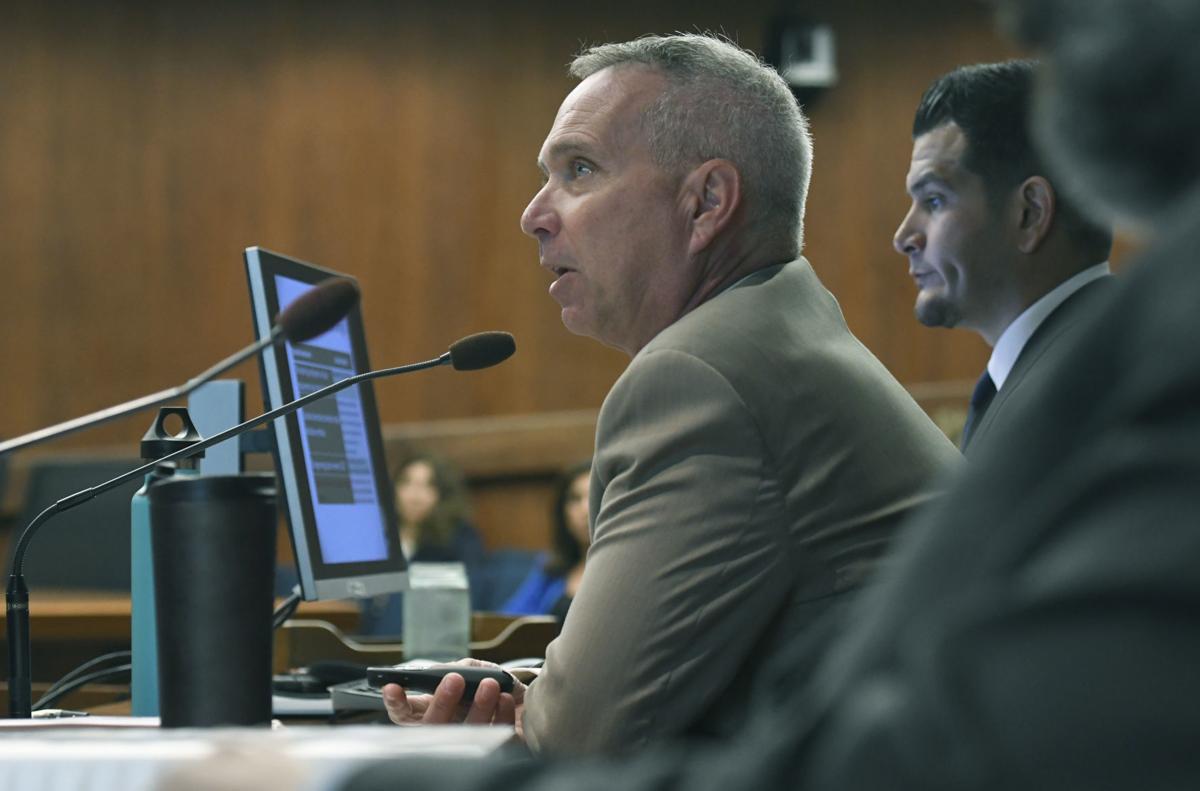 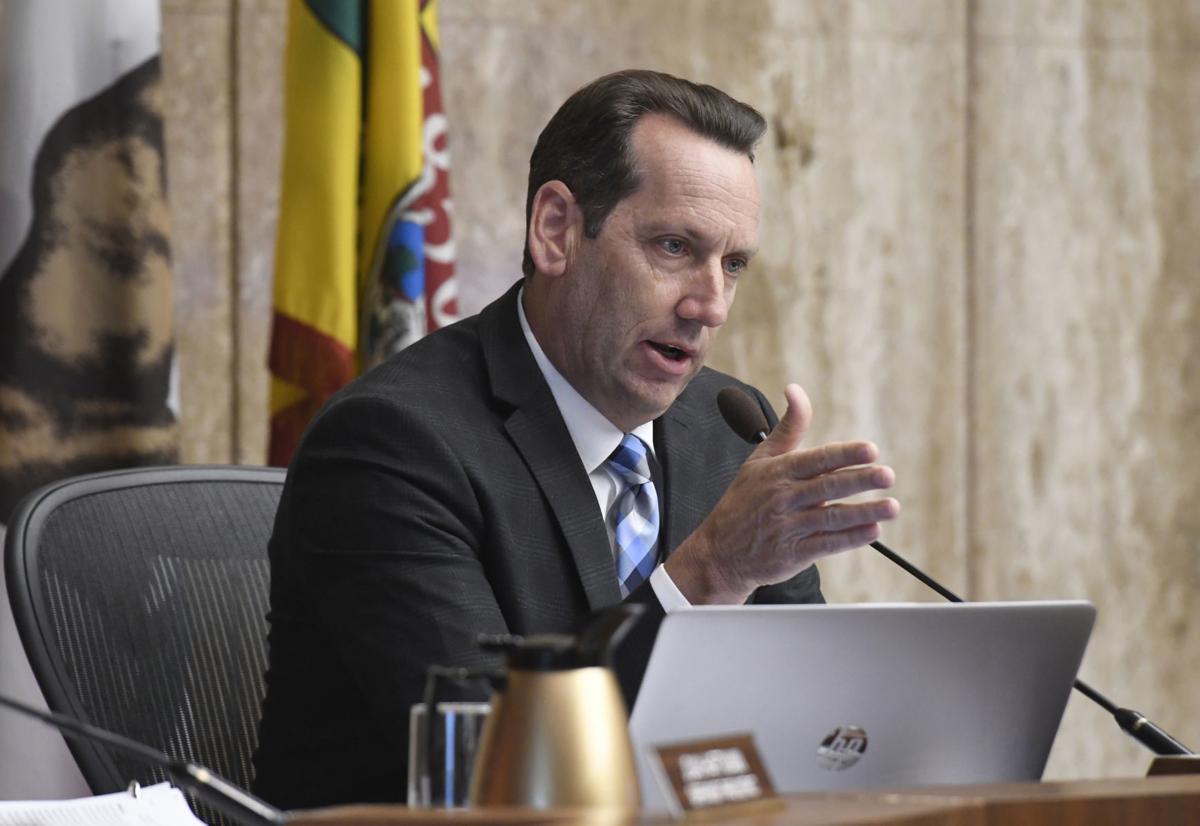 Santa Barbara County 5th District Supervisor and Board Chairman Steve Lavagnino expresses his opinion Tuesday during a hearing on proposed amendments to the county's cannabis ordinance.

Cannabis cultivators who haven’t applied for a use permit by May 9 would not have legal nonconforming operations and those who lie on affidavits would be denied permits and business licenses if proposed ordinance amendments are approved by the Santa Barbara County Board of Supervisors.

Amendments to the cannabis ordinance were unanimously approved on a first reading Tuesday by the Board of Supervisors and will return April 9 for final approval as an administrative item.

The board added those two provisions to the staff’s recommended amendments.

Supervisors also expressed their concerns over other cannabis-related issues; accepted a report on cannabis law compliance, enforcement actions and tax revenues; and agreed to accept a federal grant to help with the cost of enforcement operations.

Staff previously gave the board seven potential amendments to the cannabis ordinance, but after the options were reviewed by supervisors and planning commissioners, three were brought forward for adoption.

Proposed amendments that were not included were allowing testing laboratories on agricultural lands, increasing the control of cannabis operations on properties zoned AG-1 and allowing generators for security lighting and cameras.

Staff also recommended changing the limits on cultivation to align with Coastal Commission requirements in the Coastal Zone and clarifying that security plans must be implemented prior to a business license being issued.

But supervisors also wanted a way to prevent cannabis businesses from continuing to operate with temporary licenses if the state Legislature approves a proposed law to extend the length of those licenses.

They also wanted a provision that would allow the county to deny a business license to an applicant who had previously submitted fraudulent information in an application for a use permit.

Amendments to accomplish both goals were put together by the staff while the board addressed other issues and were brought back with the recommended changes as part of the first reading.

Supervisors were concerned about Senate Bill 67, which would extend temporary state licenses issued by the California Department of Food and Agriculture to Sept. 15, because it would allow operators who haven’t started the county permit process to continue cultivating.

“What it looks like is a way to allow one more crop that’s not regulated or taxed,” said 1st District Supervisor Das Williams.

Third District Supervisor Joan Hartmann said the county should “take every option we have available today” to limit the state’s ability to extend temporary licenses that have “created havoc locally.”

Last year, supervisors set May 9 as the cutoff date for medical marijuana businesses to operate under a temporary state license as “legal nonconforming uses,” which would give owners time to recoup their investment should they choose not to seek permanent licenses.

The resulting ordinance amendment will allow the county to notify the state that cannabis operations no longer comply with local ordinances if they haven’t applied for a county use permit by that date.

If a cannabis business is not in compliance with local ordinances, the state can deny an annual license for that operation.

“What I’d like to see is that anyone who’s lied on an application be banned for future (permits and licenses),” 5th District Supervisor and Board Chairman Steve Lavagnino said.

Staff developed an ordinance that would make submitting a fraudulent affidavit in a use permit or business license application or in any prior cannabis-related documents grounds for denying a business license.

Cannabis taxes were down for the second quarter, but enforcement operations maintained momentum and more applicants are moving through the permit and licensing processes, according to a report from the County Executive Office.

In the first quarter, the county collected $1.8 million in cannabis taxes from 30 operators but only $1.4 million from 55 operators in the second quarter, according to the report.

Dennis Bozanich, deputy county executive officer, said there are a couple of potential reasons for the $400,000 decline in revenues.

One is the seasonality of the product, he said, noting 75 percent of the crop on the market is from outdoor growing operations that are affected by the weather.

Another is a 14-percent failure rate in cannabis testing, which represents a loss of revenue to cultivators.

“There is a lot of what I would call variability in results from testing labs,” Bozanich said, adding the state is looking into the causes of that, since it calls the safety of the product into question.

During the second quarter, the Sheriff’s Office initiated 12 enforcement actions against unlicensed operators that resulted in the destruction of more than 56,400 plants with an estimated value of $7.1 million.

Planning and Development Department staff also opened 32 new enforcement cases, with 29 still in progress, and issued two notices of violation for cultivation violations and zoning and building code violations, according to the report.

Numerous complaints about odor were received from the Carpinteria area, but the report noted odor abatement is not yet mandatory in AG-1 zones for legal nonconforming medical marijuana cultivators who hold state temporary or provisional licenses.

The report said nine conditional use permit applications had been received — three in Tepusquet Canyon, four in Cebada Canyon, one in Santa Maria and one in Carpinteria.

Bozanich said seven business licenses have been approved, with one being appealed, and one operator granted a business license for the Los Alamos area is now seeking a state license.

Supervisors also agreed to accept a $58,000 grant to the Sheriff’s Office from the Drug Enforcement Agency to fund increased enforcement of crimes related to illegal cannabis production and cultivation.

A report from the Sheriff’s Office said the funds are primarily intended to be used for overtime payments to deputies while they are engaged in cannabis eradication operations.

San Luis Obispo County’s total crop value hit a new high in 2018, rising 12% from the previous year and topping the $1 billion mark, according to a report released Tuesday by the Agriculture Commissioner’s Office. The total crop value was a little more than $1.035 billion, with wine grapes leading the list at $276 million, followed by strawberries at $268.4 million and broccoli at $48.3 million, the report said.

Santa Barbara County 5th District Supervisor and Board Chairman Steve Lavagnino expresses his opinion Tuesday during a hearing on proposed amendments to the county's cannabis ordinance.