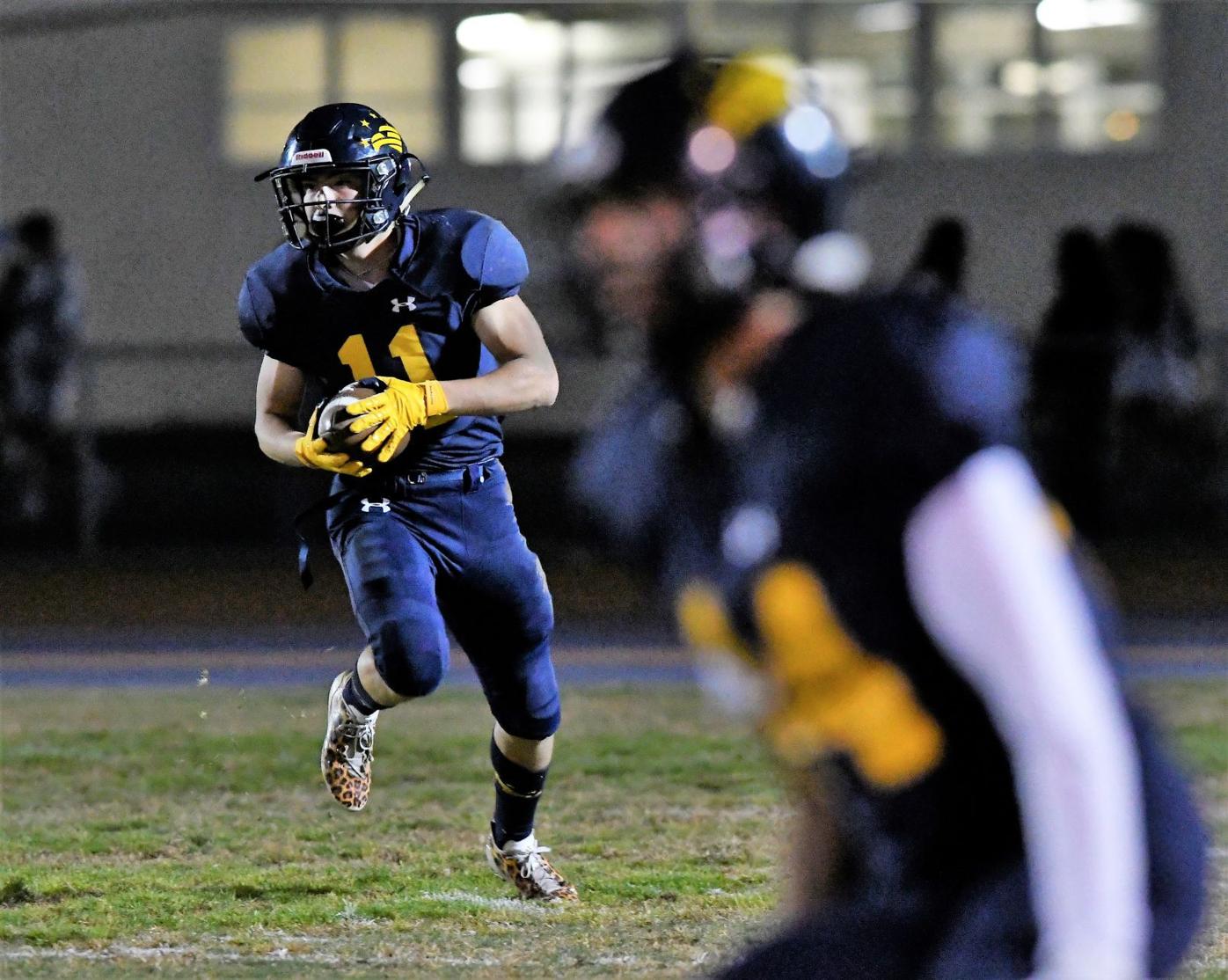 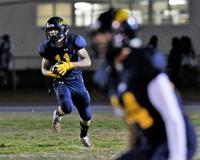 Arroyo Grande's Makai Puga returns a kick during the Oct. 9 game against St. Joseph. The Eagles host Paso Robles Friday night in a game that will decide the Mountain League champion. 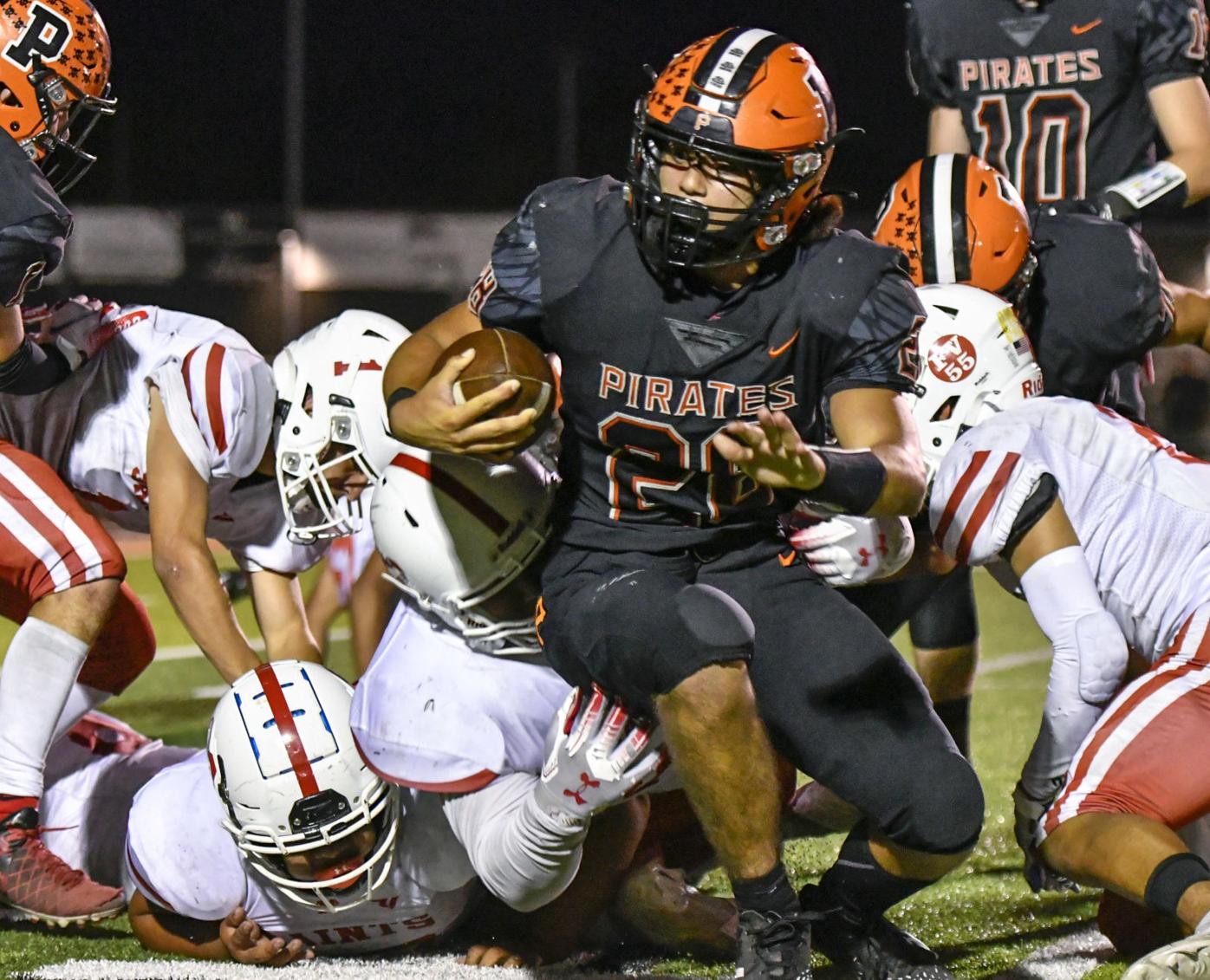 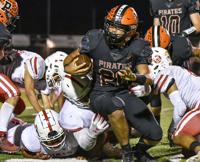 Santa Ynez’ Isaac Moran runs against Santa Maria at the Pirates’ stadium on Sept. 10. The Pirates have already clinched a playoff spot and host San Marcos in their regular season finale Friday night. 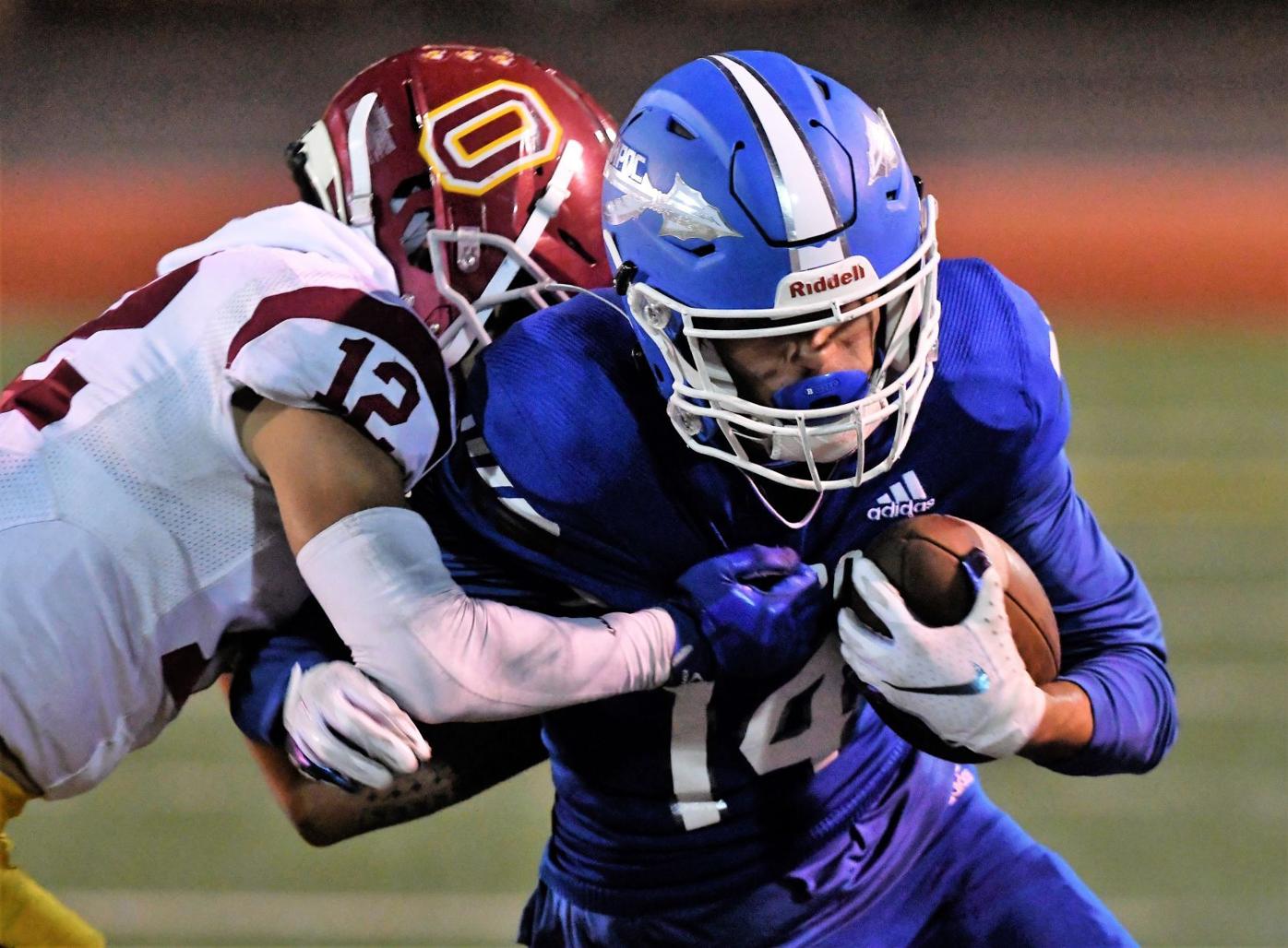 Lompoc's Rudy Elizondo runs with the ball after making a catch during last Friday's game against Oxnard. The Braves host Dos Pueblos in the regular season finale Friday night. A win would better Lompoc's chances of earning a playoff spot as an at-large team.

Arroyo Grande's Makai Puga returns a kick during the Oct. 9 game against St. Joseph. The Eagles host Paso Robles Friday night in a game that will decide the Mountain League champion.

Santa Ynez’ Isaac Moran runs against Santa Maria at the Pirates’ stadium on Sept. 10. The Pirates have already clinched a playoff spot and host San Marcos in their regular season finale Friday night.

Lompoc's Rudy Elizondo runs with the ball after making a catch during last Friday's game against Oxnard. The Braves host Dos Pueblos in the regular season finale Friday night. A win would better Lompoc's chances of earning a playoff spot as an at-large team.

It's the final week of the regular season and there's been some more shifting in today's Power Rankings.

The top three spots have been cemented for much of the second half of the season, with Bishop Diego having a vise-like grip on the top spot, followed by Mission Prep and Santa Barbara. St. Joseph has seized its grip on the No. 4 spot despite its 5-4 record.

Santa Ynez has cracked the top five this week. Lompoc has also seen a rise after its 64-28 win over Oxnard.

Seven up: Take your pick for Player of the Week

Paso Robles, even with its 6-2 record and five-game win streak, has dropped all the way to No. 8 this week. The Bearcats have won, but none of their wins have been impressive or convincing enough to keep them in the top five. Paso has a chance to shut me up, though, as the Bearcats head to Arroyo Grande Friday to take on the Eagles in a game that will decide how the Mountain League title chase shakes out.

If Paso Robles wins, the Bearcats are the outright, undisputed and unbeaten league champion. If Arroyo Grande wins, that means three teams could finish 4-1 in league, if St. Joseph beats Righetti.

Let's take a look at this week's rankings. (The Power Rankings include only teams from Santa Barbara and San Luis Obispo counties).

There's really not much left to say about the Cardinals. They're clearly the best team in Santa Barbara County. I think Camarillo will put up a fight for the Camino League title Friday night, but Bishop Diego should enter the playoffs with an 8-1 record next week.

Mission Prep has finally hit the gas with 60-point wins over Morro Bay and Templeton. Now it's time to take on the red-hot Tigers in the Ocean League title game. Mission Prep is virtually guaranteed to be in Division 2 in the CIF Central Section playoffs, which should be a tough bracket. With that said, the Royals surely want to climb in the rankings to better their seeding and have some home games in the playoffs. Right now, they're the No. 10 seed.

The Dons' strong season continued with a throttling of rival Dos Pueblos last week, but now they will face a really strong Rio Mesa team that will determine who finishes in second-place behind Pacifica (assuming Pacifica handles Oxnard).

Have the Knights finally reached their potential? Maybe. They used Darian Mensah and Mark Crisp at quarterback to beat Pioneer Valley handily last week. I think the loss of Chris Miller will definitely hamper them in the playoffs, but shouldn't play too big a factor against Righetti, though it would've been fun to see him play against his former team.

It's hard to overstate how much rests on a single spot in the rankings. If St. Joseph drops just one spot, the Knights become the No. 1 seed in Division 3 and would have homefield advantage throughout the playoffs and would host the No. 16 team in the first round. If they stay at No. 24, they would be the No. 16 team in Division 2 and travel to face the top seed in the division, which would be Hanford. One spot in the rankings is HUGE.

The Pirates were No. 8 a couple weeks ago, but have really played well over the last two weeks, routing Ventura and Channel Islands. They close out the regular season with a home game against a decent San Marcos team. Santa Ynez has already clinched a playoff berth. How will they approach the season finale?

Arroyo Grande has been an up-and-down team for much of the fall, but has been solid when it mattered. They fell behind Righetti 28-10 two weeks ago and pulled out the 39-35 win. They then rolled past Nipomo last Saturday.

I've seen both Paso Robles and Arroyo Grande and I think the Eagles are the better team, but they have to come out ready to play. Arroyo Grande looked listless in the first halves against St. Joseph and Righetti, but was able to comeback against the Warriors. That can't happen against a Paso Robles team that runs the ball.

Lompoc looked AMAZING last week against a so-so Oxnard team. The Braves should be able to repeat their performance against a lesser Dos Pueblos team. That will get them to 5-5. Does that equate to a playoff spot? We all have no idea.

I, for one, hope the Braves get into the playoffs just to see Sheldon Canley Jr. and Deville Dickerson take the field one more time. This Lompoc team has been entertaining for sure, though the results haven't been up to Andrew Jones' expectations.

The Bearcats have won five straight games. But those five wins have come by just 51 points against teams that are a combined 14-28.

Paso Robles is a good football team, but don't be fooled by the record and the streak. Three of those wins are against Pioneer Valley (0-7), Righetti (1-7) and Atascadero (2-7), a sub-par Ocean League team.

Paso's best win was against St. Joseph, which is a legit victory that the Bearcats earned on the road. The 21-13 win over Righetti and 15-6 win over Pioneer Valley just haven't been convincing enough.

I think they can beat Arroyo Grande, but I don't believe they will.

The Titans ended their regular season on a three-game losing streak that included a forfeit loss to St. Joseph.

Now, that's not all bad. That could get them a favorable ranking for the playoffs. Right now, the Titans are the last seed in Division 3. They would LOVE to fall a spot or two and be one of the top seeds in Division 3. Combine that with having an extra week of preparation heading into the playoffs and Nipomo can definitely make a postseason run. Titan fans, do not worry. It's not all bad.

There is a MASSIVE gap between the area's top nine teams and the tenth-best team, per the CalPreps rankings. Nipomo is 136 spots higher in the state rankings than SLO. Heck, Righetti is just two spots behind the Tigers even though the Warriors are 1-7.

Both SLO and Mission Prep have beaten up a soft Ocean League, but I think the Tigers' overall schedule has been much softer.

This is a good tune-up matchup for both teams heading into the postseason, though I think Mission Prep gets the most out of it after running through teams all season.

Seven up: Take your pick for Player of the Week

For St. Joseph, it's defensive leader Anthony Moreno, who helped the Knights pitch their first shutout of the season in a 28-0 Mountain League win over Pioneer Valley.

Lompoc had two players put on particularly special victories, both on offense.

The Braves' quarterback, junior Cavin Ross, accounted for six touchdowns in the win. He threw three touchdowns to Dickerson, two to running back Sheldon Canley Jr. and ran for another.

Over in Santa Ynez, Luke Gildred, the Pirates' quarterback, used his arm and his legs to power the Pirates to their seventh win of the season. Gildred threw three touchdowns and ran for another as the Pirates pounded Channel Islands.

Isaac Moran, a junior, helped power the Pirate defense, finishing the game with 14 total tackles, three tackles-for-loss and a sack in the Santa Ynez win.

Arroyo Grande's junior quarterback Max Perrett had another strong outing as the Eagles crushed the Titans 37-14. He topped 200 yards passing and threw two scores as the Eagles rolled to a 37-14 win Saturday. Can he keep it going Friday in the big game against Paso Robles? We'll find out.

Over in the 8-man realm, Valley Christian suffered a wild 88-56 loss at Coast Union Saturday night. In that one, junior QB Sean Swain threw for 177 yards and two scores and also rushed for two touchdowns. He also stepped up on defense and made nine tackles and recovered a fumble. He then handled kicking duties and knocked through three touchbacks on kickoffs.