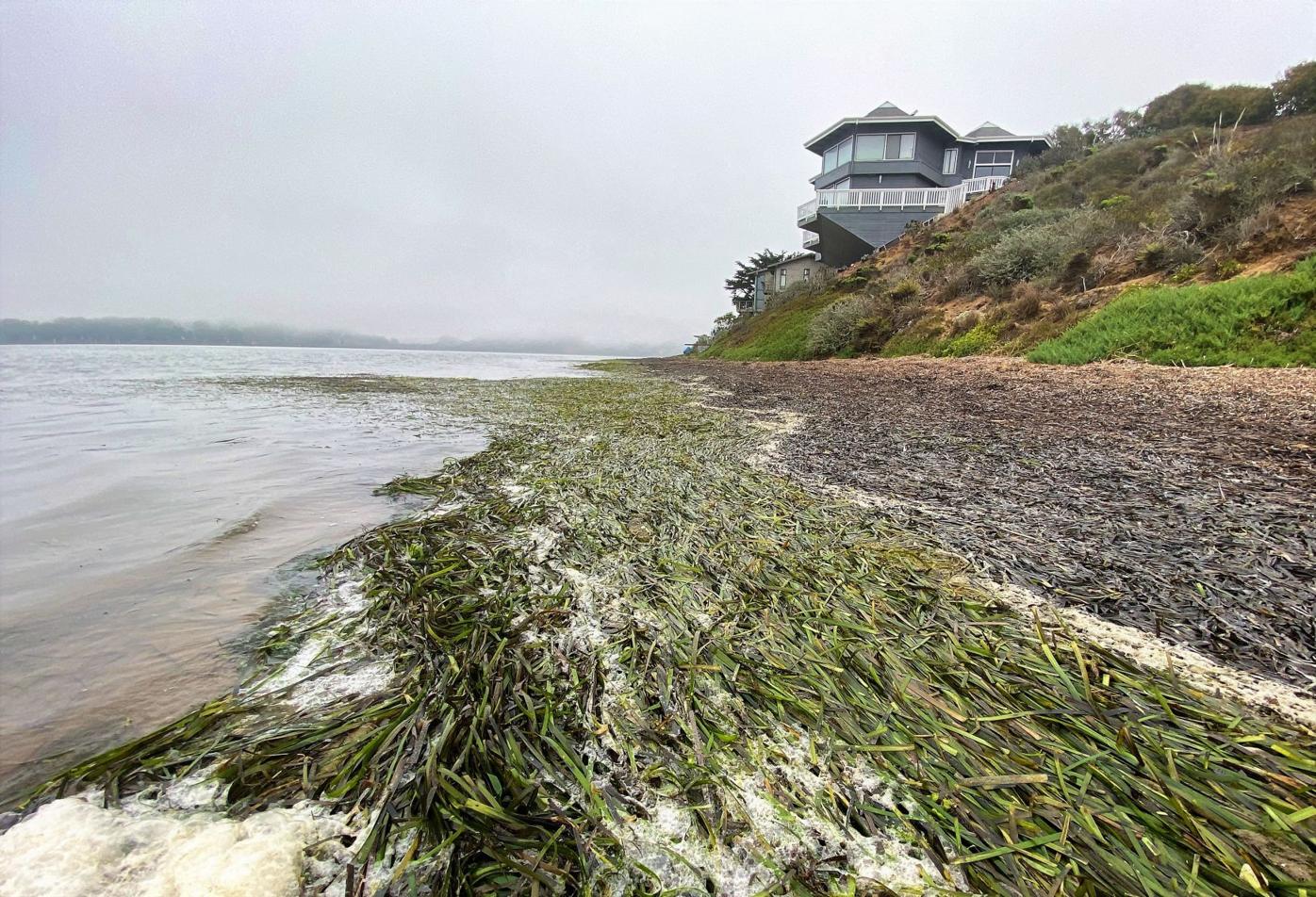 The newly deposited eelgrass blades at the water's edge in Los Osos were deep green in color, while a few feet away were lighter shades of green. Between the bay's waterline and the cliffs was the grayish black color of the decaying eelgrass and, finally, the bleached and dry, brittle blades at the high-water mark against the cliffs. 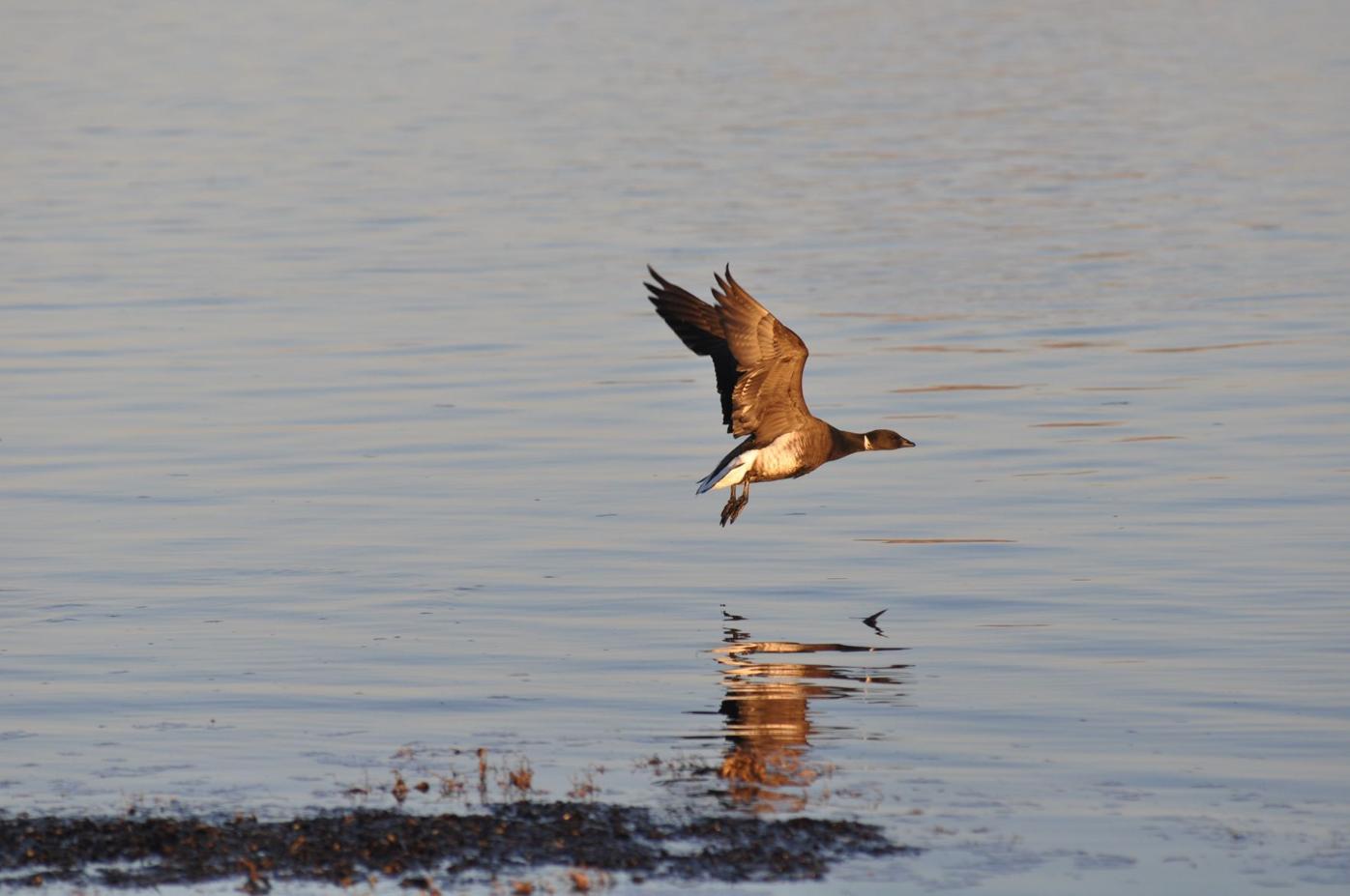 The newly deposited eelgrass blades at the water's edge in Los Osos were deep green in color, while a few feet away were lighter shades of green. Between the bay's waterline and the cliffs was the grayish black color of the decaying eelgrass and, finally, the bleached and dry, brittle blades at the high-water mark against the cliffs.

You can usually find Trish and me walking our dog CoBe around Los Osos in the evening. Our favorite walk is along the shoreline that stretches from Baywood Park Beach off Pasadena Drive to the Audubon overlook at the end of 4th Street. Over the past year, we've noticed a gradual increase in the amount of eelgrass washed up on the sand.

In fact, on our last hike, there were areas that you couldn't see any sand below the wrack of eelgrass that formed in different ribbons of colors by the tides. The newly deposited blades at the water's edge were deep green in color, while a few feet away were lighter shades of green. Between the bay's waterline and the cliffs was the grayish black color of the decaying eelgrass and, finally, the bleached and dry, brittle blades at the high-water mark against the cliffs.

These eelgrass blades grow up to about 3 feet in length until they naturally break away from their underwater root-like structure called rhizomes buried in the bay's sandy, clay, muddy bottom and remain to grow more new blades.

Eelgrass is not a green, red and brown variety of seaweed or any other type of algae but a marine, underwater, flowering plant. Eelgrass functions as vital nursery grounds and foraging areas for many aquatic species like rockfish, surfperch, sardines, halibut and other flatfish.

These birds migrate from Arctic nesting sites in northwestern Canada, Alaska and Russia to Morro Bay every fall through spring. Most of the geese gather at Lzembek Lagoon in southwestern Alaska during the fall, near the Aleutian Islands. This lagoon contains some of the world's largest eelgrass beds, which the geese rely on for food. That staging area allows the geese to add the necessary weight and nutrients to complete their migration southward toward Mexico and California. The lagoon supports nearly the entire Pacific Flyway population of brant geese.

Consequently, eelgrass serves as an important biological indicator of the bay's ecosystem health. If the amount of eelgrass is actually increasing, that would be fantastic news.

Bell told me that she has received numerous reports of increased amounts of eelgrass wrack throughout Morro Bay.

Eelgrass survey data from the Morro Bay National Estuary Program indicated 344 acres of eelgrass beds existed in 2007; that number dropped to less than 17 acres in 2010. The latest survey, conducted in 2019, showed 40 acres of beds. It will be interesting to see what future surveys indicate.

This leads to the question, 'Why did the beds decrease in the first place, and why are they possibly recovering, at least in the short term?'

Bell told me there probably isn't one particular cause but a combination of many factors, such as water quality.

According to a study from Cal Poly's College of Science and Math published in the journal Estuarine, Coastal, and Shelf Science, "Water-quality conditions in some parts of Morro Bay estuary may be the key factor preventing eelgrass recovery after a recent decline."

The study showed that "In areas where eelgrass disappeared and had not returned — particularly in the southern or back part of the bay — water conditions were dominated by a combination of higher water temperatures and salinity, lower oxygen levels, high turbidity that limits light availability, and limited flushing, where water gets 'trapped' for longer periods. Previous research has shown that all of these factors can be stressors for eelgrass; together, they may prevent eelgrass from bouncing back. Close to the mouth of the bay, where ocean tides regularly refresh this region with relatively cool, clear and more oxygenated water, the researchers found that eelgrass has persisted, and recent restoration efforts with the MBNEP were successful."

Rain can have a dramatic effect on the estuary. In mid-December 2006, for instance, more than 8 inches of rain fell in just four days. Despite 6-foot-plus high tides, the water flowed continuously out to sea through the bay's mouth, according to an InterOcean S-4 Current Meter, an instrument loaned by Pacific Gas & Electric Co. and installed inside the bay's entrance that not only measured water currents but water temperature and salinity.

That meant much less salty ocean water flowed in, and the salinity level dropped significantly. This storm runoff caused higher turbidity levels due to elevated amounts of particulates in the water column. This condition limited the miracle of photosynthesis in the bay’s marine plants, which takes in carbon dioxide, water and the sun's light and produces oxygen and carbohydrates.

Conversely, drought also plays a significant role in the health of the Morro Bay Estuary and watershed. "Some effects are challenging; less water in the creeks for steelhead," she said. "Also, the lesser amount of freshwater input to the bay may be one factor that affects eelgrass growth. However, some effects are positive; a reduced runoff to the estuary means lower bacteria levels for oyster farmers and clearer water for photosynthesis.

"The Estuary Program works to improve water quality and natural areas in and around Morro Bay so that wildlife and people can thrive. Our work to restore eelgrass is based on many years of water quality and eelgrass monitoring, research with Cal Poly and Cuesta College, and technical input from eelgrass experts across the West Coast. We are heartened to see the acreage of eelgrass continue to rise since 2010 and appreciate the community's support in protecting this precious resource."

We are so fortunate to live on the Central Coast.

You can view a beautiful video describing the microclimates surrounding the Diablo Canyon Power Plant along the Pecho Coast, with scenic views of the hills, canyons, trails and ocean, at https://www.youtube.com/watch?v=SjPY_8zapdg&t=9s