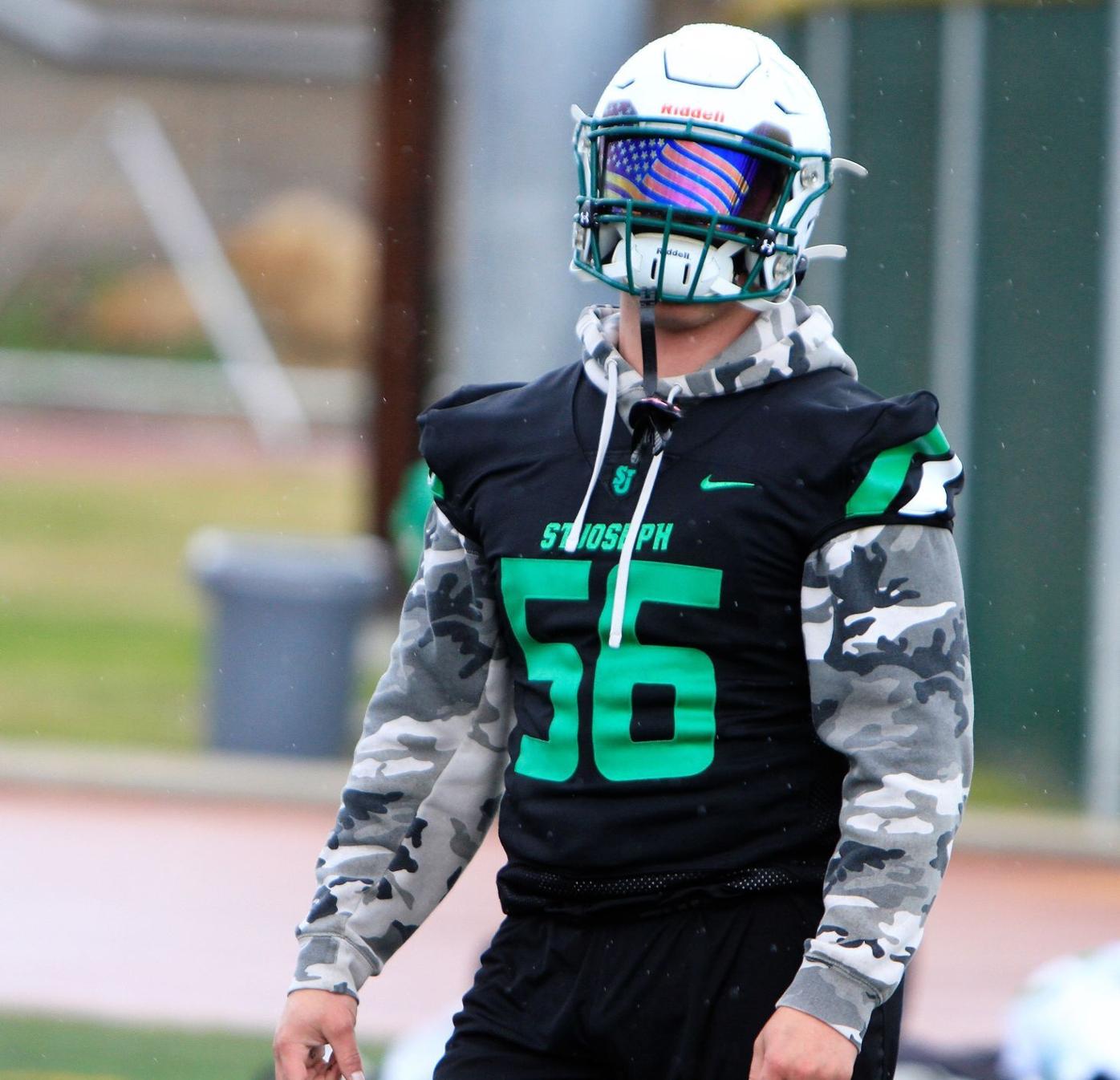 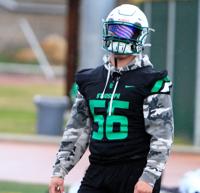 St. Joseph linebacker Jayce Gamble is again leading the Knight defense, his third year as a starter. Gamble and the Knights are set to play at Arroyo Grande Friday night at 7 p.m. 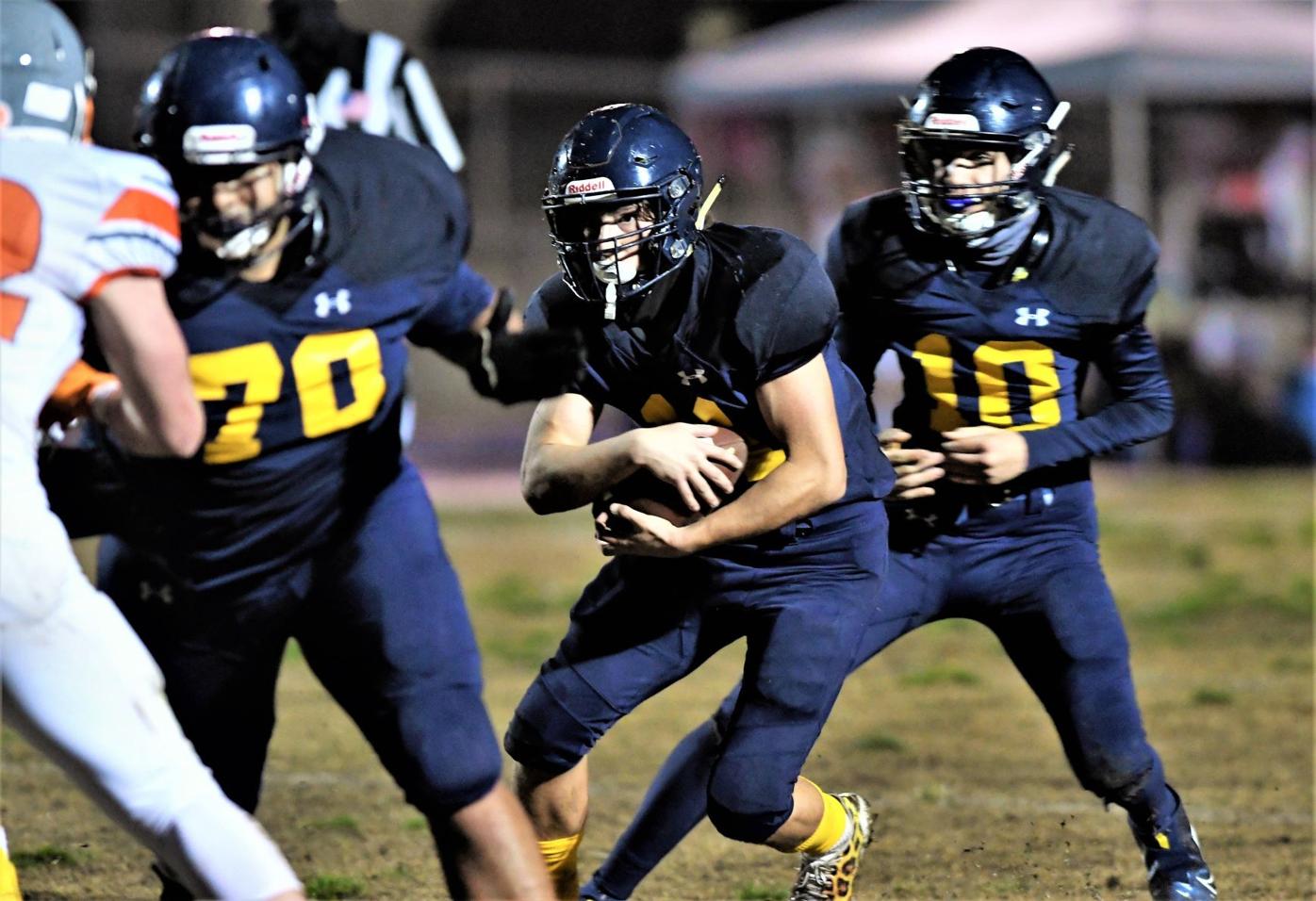 Arroyo Grande running back Makai Puga takes a handoff from quarterback Max Perrett during last Friday's game against Atascadero. Puga had 266 yards rushing and three scores in the 33-21 win.

St. Joseph linebacker Jayce Gamble is again leading the Knight defense, his third year as a starter. Gamble and the Knights are set to play at Arroyo Grande Friday night at 7 p.m.

Arroyo Grande running back Makai Puga takes a handoff from quarterback Max Perrett during last Friday's game against Atascadero. Puga had 266 yards rushing and three scores in the 33-21 win.

What's the area's top matchup of the second week of the spring football season?

Well, that's an easy question to answer: The only game that features two 1-0 teams.

St. Joseph, coming off its dominant win at Paso Robles last Friday, will travel to Arroyo Grande to face the Eagles, which beat Atascadero last week, in a Mountain League game.

Kickoff is slated for 7 p.m. The game will be streamed live on santamariatimes.com.

St. Joseph went up to Northern San Luis Obispo County last Friday and came back home with a 44-0 win over Paso Robles.

The Knights faced little resistance against the Bearcats. Brett Burress, a senior running back, scored three times and had 175 yards rushing on the night. Darien Langley also had a rushing touchdown and racked up 95 yards on 17 carries.

Mark Crisp was efficient, completing 12-of-15 passes for 123 yards and a score, a 32-yard touchdown pass to senior Tyler Williams, a UTEP signee. Travis Royal, a junior transfer from Arroyo Grande, caught four of Crisp's passes for 37 yards.

Arroyo Grande's running back, meanwhile, had an even more productive evening last week in the 33-21 win over Atascadero.

Makai Puga, a junior, ripped through the Atascadero defense, rushing for 266 yards on 19 carries with three scores himself.

The edge in the game likely goes to St. Joseph, which has a more experienced quarterback in Crisp, who won the starting job as a sophomore in 2019 before suffering a broken collarbone that ended his season. The Knights also have a big, experienced offensive line led by senior Max Stineman and sophomore Makai Sat. Anthony Reynoso is also a handful at fullback/H-back.

Unable to play due to injury, Vincent Armenta sticks by his Arroyo Grande teammates

The Eagles started Max Perrett at quarterback last week. The junior, in his first varsity start, completed 5-of-19 passes for 23 yards and an interception in wet, cold conditions against the Greyhounds.

Danny McKinley also topped 100 yards rushing for the Eagles last week. He went for 115 and a score on 12 carries. Freshman Thomas Herlihy had 56 yards rushing and a touchdown.

The Eagles rushed for 440 yards against Atascadero.

Anthony Palermo, a senior, is also a play-maker for the Eagles in the receiving and return game.

The Knights have senior Jayce Gamble in the middle of their defense. Gamble is 6-foot-1, 220 pounds. He helped the Knights pitch a shutout against Paso Robles.

Sophomore quarterback Cavin Ross put the area on notice with a big-time performance against the Pirates. He went 21-for-32 for 345 yards and three scores with one interception.

Cailin Daniels continues to show he's got next-level play-making ability as he caught seven passes for 100 yards and a score. Deville Dickerson caught a touchdown pass, as did Rudy Elizondo, which went for 77 yards.

Sheldon Canley Jr. cruised to 107 yards and a score on 18 carries. The junior has a multitude of Mountain West offers, including ones from San Jose State, Nevada, Colorado State and San Diego State.

Senior Andrew Gaston led the Braves with 11 total tackles. Adam Lazaro, Elijah Perkins, Carlos Garcia and Gabriel Navarrete each had a sack in the win.

The Braves failed to convert on all their point-after tries, scoring four touchdowns for 24 points.

Dos Pueblos was originally scheduled to play Cabrillo in the season opener last week, but the Conquistadores pulled out of the game, citing player safety concerns.

This will be the 2021 debut for the Dons, which won the Channel League in 2019 behind the talented arm of senior quarterback Deacon Hill, who has signed with Wisconsin.

The Dons had their game against San Marcos canceled due to the COVID-19 cases within the San Marcos program.

The Santa Ynez offense struggled to get into gear against the athletic Lompoc defense. Bennett Redell was sacked four times and completed 5-of-11 passes for 47 yards. Redell had success running the ball, carrying it 19 times for 97 yards and the only Pirate touchdown.

Senior Logan Ast added 44 yards rushing on 11 carries. He was also the Pirates' leading receiver with one catch for 24 yards.

Junior linebacker Tanner Padfield is also a key member of the defense. He had eight tackles last week.

Shaw and Cash McClurg each had a sack last week against the Braves.

The Conqs have struggled to keep their numbers up during the pandemic. San Marcos was unable to play Santa Barbara last week due to COVID-19 protocols, resulting in this week's game with two teams who have not played in about 500 days.

The game will be the debut for first-year Cabrillo coach Andy Guyader.

Cade McNamee, a senior who played on the defensive line and at tight end in 2019, was expected to take some snaps at quarterback while also playing middle linebacker.

Senior Trey Robison could also play some quarterback but is a solid strong safety on defense and could also eat up some carries at running back.

The Conqs are running a Wing-T offense this year.

Morro Bay's only score in the 21-7 loss to Santa Maria came on a pick-six last week.

The Pirates did hold the Saints to 79 yards rushing and about 200 yards of total offense, but couldn't get anything going offensively.

Templeton, now in the Mountain League, beat Wasco 39-22 last week in a non-league game. Quarterback Tyler Kaschewski had 164 yards rushing and three touchdowns and Joshua Berna had 24 carries for 160 yards and two more touchdowns for the Eagles.

San Luis Obispo will try to knock off some rust as the Bearcats try to get up off the mat after last week's shutout loss to St. Joseph.

SLO will have a new look this spring as all-everything QB Emilio Corona is now playing baseball at the University of Washington and OL/DL nightmare Thomas Cole is now enrolled at UCLA.

Mission Prep was another of the impressive teams last week, smothering Nipomo defensively in a 24-10 home win.

It appears the Royals will play Friday night and then suit up against Wednesday night for a road game at Pioneer Valley.

Freshman Drew Harrigan led the Royals in rushing last week against the Titans with 56 yards on 11 carries and a touchdown. Jack Susank had 11 carries for 47 yards.

Susank also started on defense and handled the kicking duties for Mission Prep, which has no seniors listed on its roster.

Atascadero moved the ball alright against the Eagles last week. Evan Moscardi completed 14-of-30 passes for 152 yards and a touchdown. He also had 80 yards rushing. Cole Tanner, a sophomore, had 68 yards on 17 carries as the 'Hounds totaled over 300 yards of offense last week.

Righetti and Pioneer Valley have yet to play this year after having COVID-19 outbreaks in their programs.

A look at Saturday's Santa Maria-Nipomo matchup will be published tomorrow.

In Lompoc, sophomore quarterback Cavin Ross showed he used the time off wisely. Ross, who started for Lompoc as a freshman in 2019, threw for 345 yards and three scores as the Braves beat Santa Ynez 24-7.

Meanwhile, in San Luis Obispo County, a new player made an impactful opening statement. Arroyo Grande junior running back Makai Puga broke on to the scene Friday against Atascadero, rushing for 266 yards and three touchdowns in the 33-21 win over the Greyhounds.

While St. Joseph made a statement that it is perhaps the top program this spring, Brett Burress, a senior running back, had an impressive individual game. Burress had 175 yards on 17 carries with three touchdowns. St. Joseph beat Paso Robles 44-0. (Arroyo Grande is slated to host St. Joseph Friday night).

Santa Maria traveled to Morro Bay and quarterback Murad Alamari threw for two touchdowns and ran for another as the Saints beat Morro Bay 21-7.

Keyshawn Pu'a's Nipomo team took a 24-10 loss at Mission Prep on Saturday. Pu'a did what he could on defense, piling up 12 total tackles and two tackles-for-loss.

In the loss to Lompoc, Santa Ynez linebacker Christian Shaw led the Pirate defense. He had 11 total tackles, 1 1/2 tackles-for-loss and a sack.k

Jack Susank did a little bit of everything in the Royals' win over Nipomo. He led the team with 12 carries for 47 yards while making eight tackles, with a sack on defense. He also handled the kicking duties, making all three PATs and hitting a 38-yard field goal.

Vote for Player of the Week

Photos: Lompoc gets past Santa Ynez 24-7 at Huyck