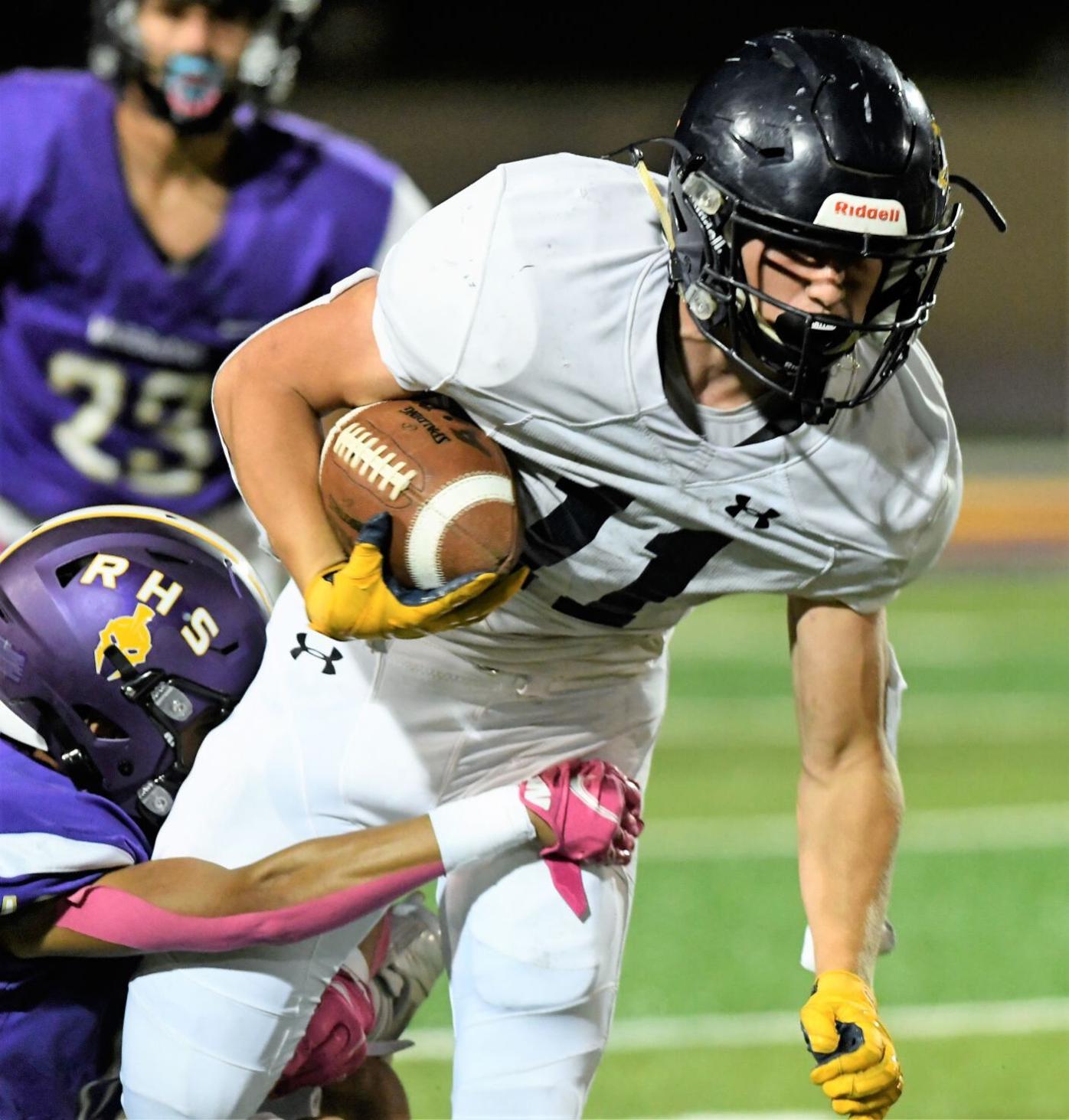 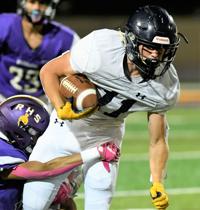 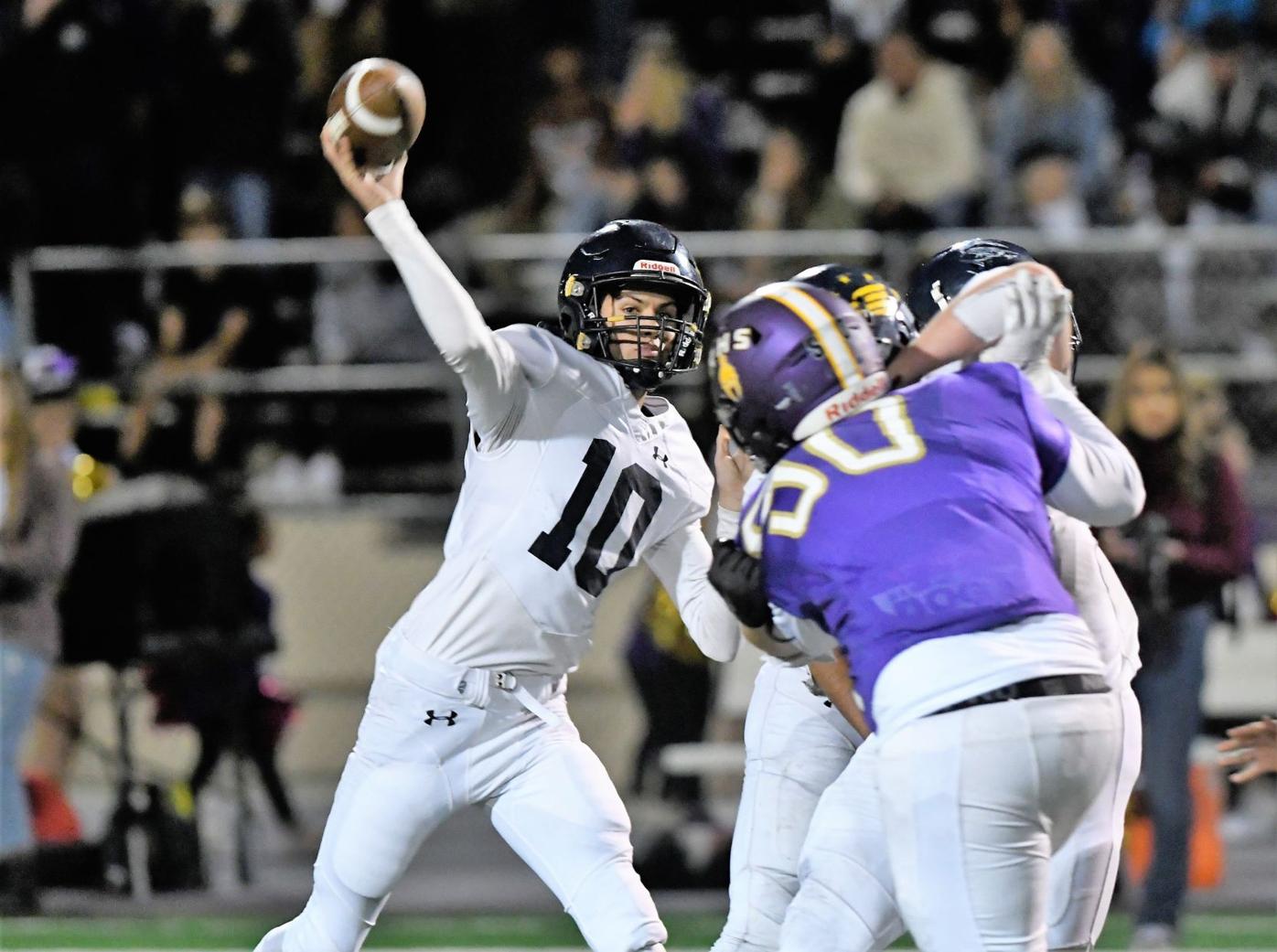 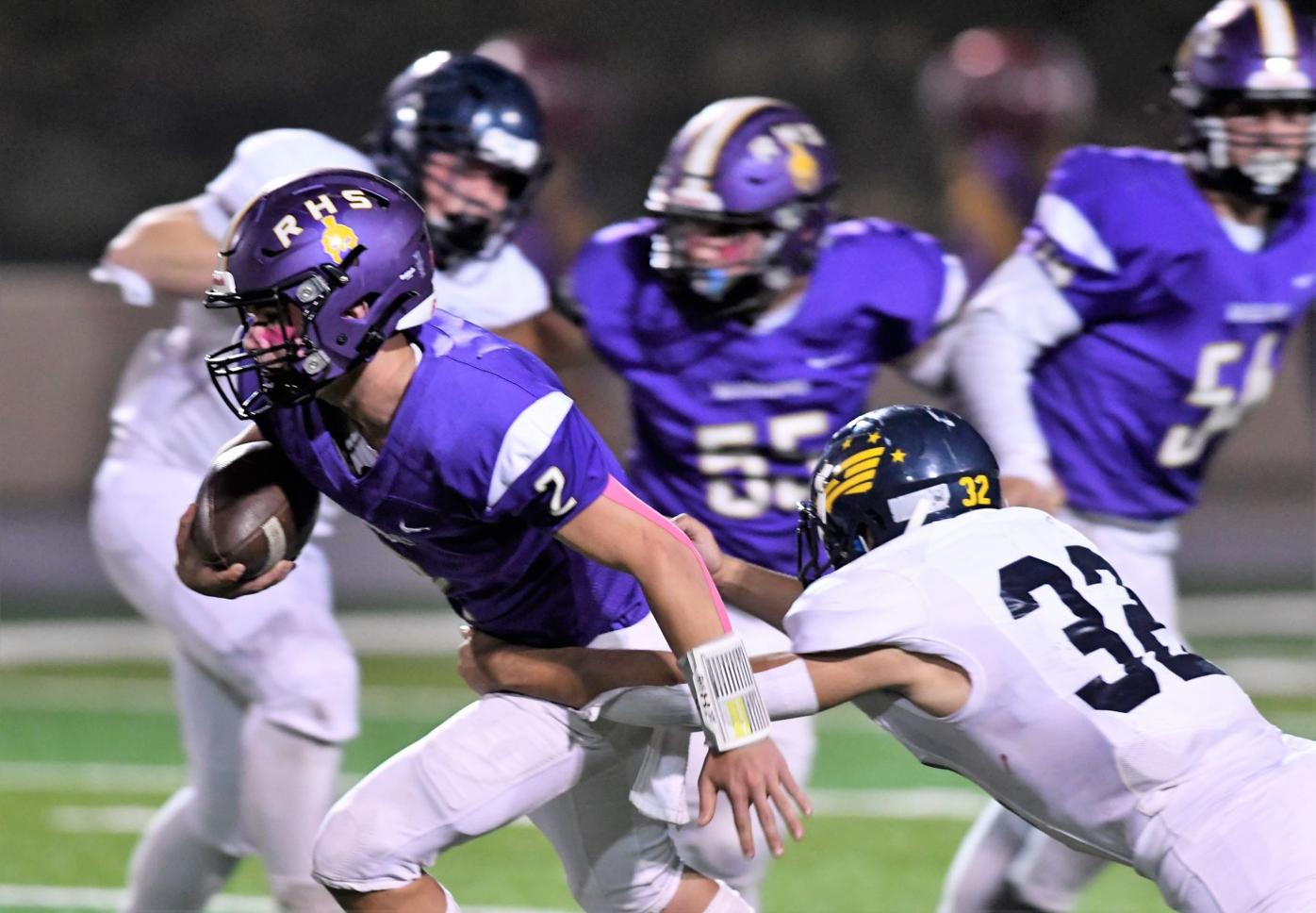 Righetti's Braden Claborn is wrapped up by Arroyo Grande's Kaden Tynes during Friday's Mountain League game against Arroyo Grande. Claborn left the game in the second half as Righetti fell to A.G. 39-35. Claborn said he suffered a torn ACL in the game. 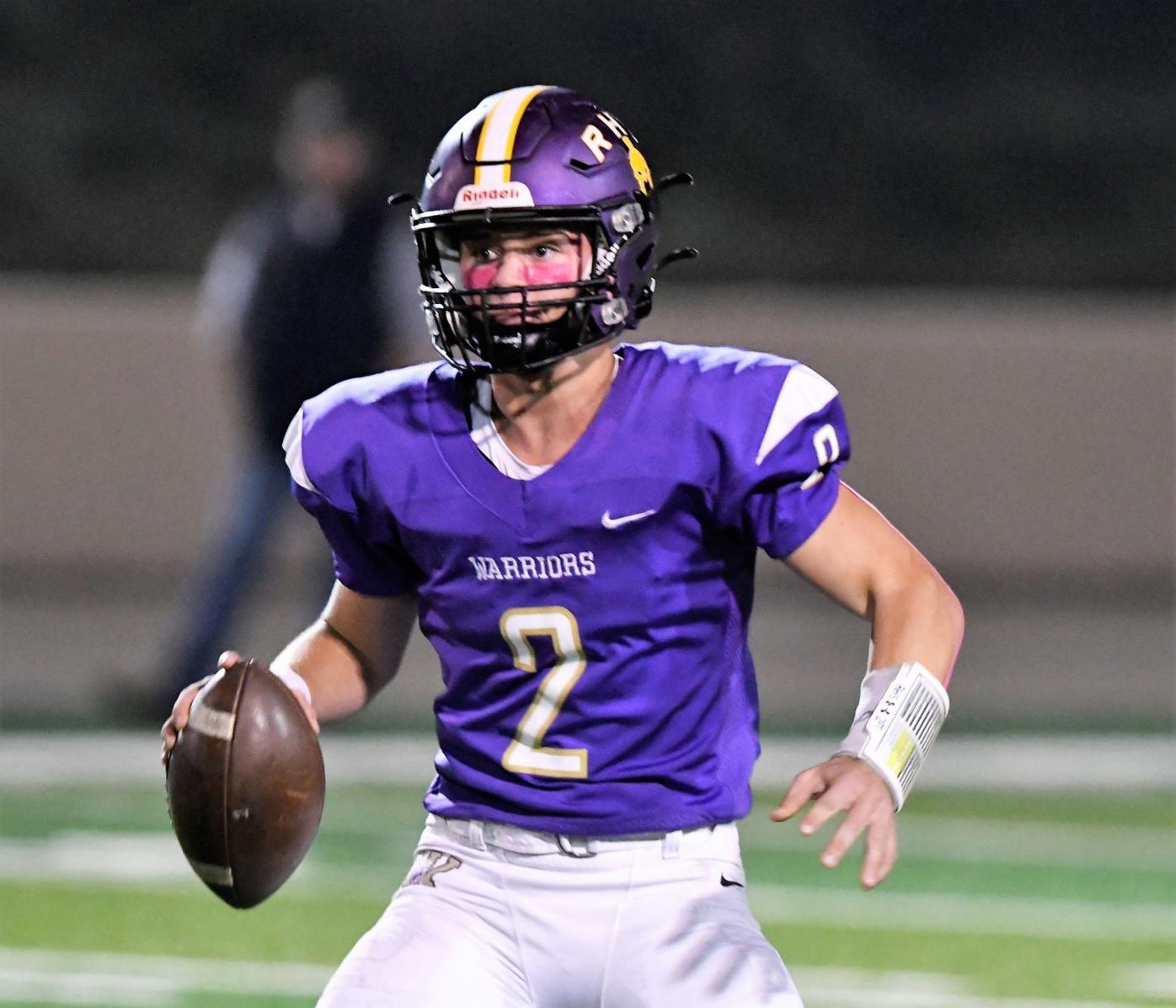 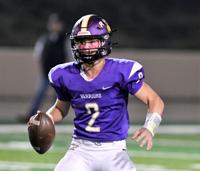 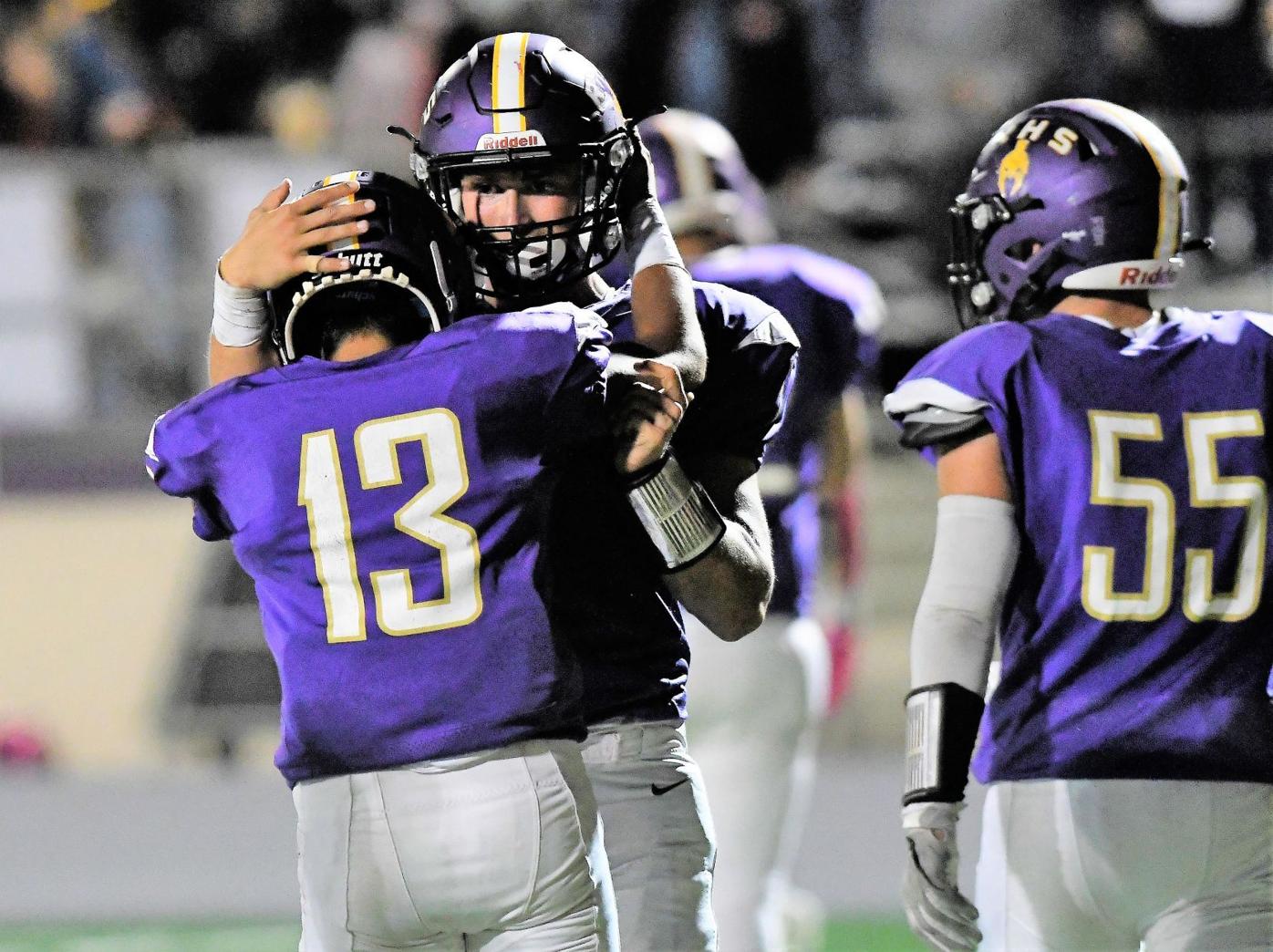 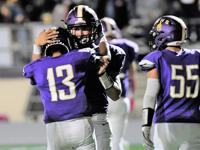 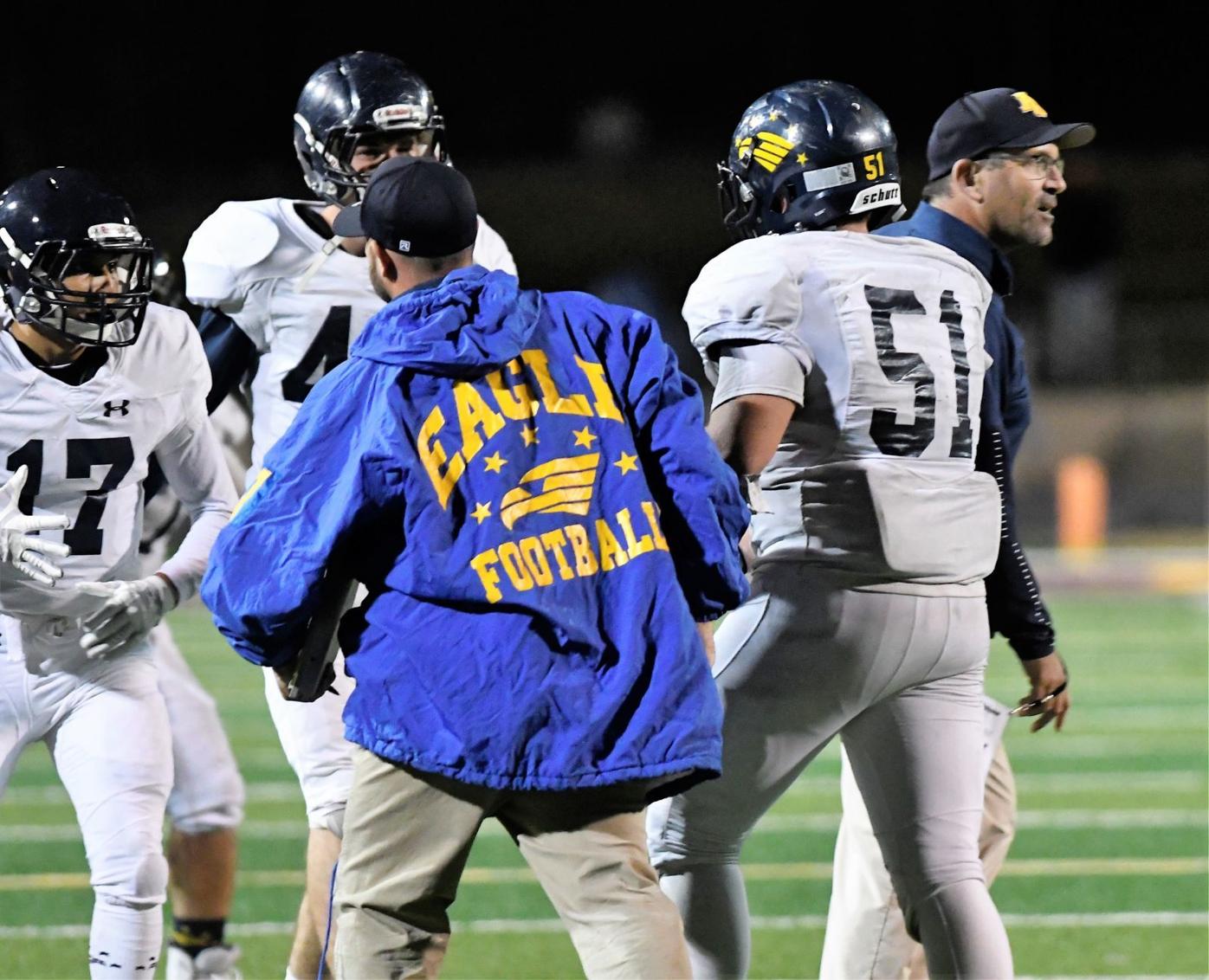 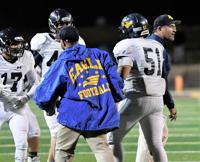 Righetti's Braden Claborn is wrapped up by Arroyo Grande's Kaden Tynes during Friday's Mountain League game against Arroyo Grande. Claborn left the game in the second half as Righetti fell to A.G. 39-35. Claborn said he suffered a torn ACL in the game.

It was pretty much all Arroyo Grande after that.

The Eagles stormed back, out-scoring Righetti 29-7 in the rest of the way for a 39-35 Mountain League win at Warrior Stadium. Righetti is now 1-6 on the season and 1-2 in league games.

Makai Puga scored on a 26-yard catch-and-run on a pass from Max Perrett to cut the Warriors' lead to 28-17 at halftime.

Claborn, who threw two first-half touchdowns, was injured early in the second half and Righetti's offense struggled to maintain its level of play thereafter.

Arroyo Grande's offense kept charging at the Warriors and finally pulled ahead on a drive led by quarterback Max Perrett. The senior found Damian Santos for a big third-down throw into Righetti territory with 2:25 left. Perrett connected with Koa Kopcho for 16 yards to the 25 and hit Kopcho with another throw over the middle down to the Righetti 1.

Puga then walked into the end zone as it appeared Righetti allowed him to score in order to get the ball back as quickly as possible as the Eagles took a 39-35 lead with 42 seconds left.

Righetti senior Elias Martinez's remarkable 48-yard punt return set the Warriors up at the Arroyo Grande 32 with 36 seconds left in the game.

Backup quarterback Abel McCormack threw a dime to Brian Monighetti to set the Warriors up with a first and goal at the Arroyo Grande 5 and 20 seconds left.

McCormack sprinted right on first down and fired a strike to Martinez, who was tightly covered. Martinez couldn't hold on to the pass in the corner of the end zone. The official with the best vantage point ruled the pass incomplete, but another official signaled touchdown, causing some confusion on the field as Righetti's players, coaches and fans thought they had scored with 13 seconds left in the game.

On second down, McCormark rolled to his left looking for an open receiver. When he couldn't find one, he pulled the ball and ran toward the goal line. The hole that was once there suddenly closed up and McCormack was tackled shy of the 1 as time ran out.

The Eagles' 18-point comeback was complete.

The win was an emotional one for Arroyo Grande coming off of last week's disappointing 39-21 home loss to St. Joseph, snapping the Eagles' four-game win streak.

"We don't do anything easy," Arroyo Grande coach Mike Hartman said. "We just have to keep scratching and clawing and that's what this is. I'm super proud of our kids and for their effort. They didn't give up when they were down, they were playing hard for one another. Our defensive staff made some great adjustments, Righetti came out and played really well. We had to make some on-the-fly adjustments and our kids responded."

Claborn, a junior, learned Friday night that he suffered a torn ACL. This comes after missing three games with a broken collarbone.

The Warriors scored on a 15-yard touchdown run by Brian Monighetti with 8:32 left in the first quarter Friday.

William Dawes got the Eagles on the board with a short field goal and Arroyo Grande took its first lead on a 65-yard touchdown run by senior Kaden Tynes.

Monighetti's big catch-and-run and a 25-yard reception by Bradley Spence set up Ryan Boivin's 1-yard touchdown to put the Warriors up 14-10 with two minutes remaining in the first.

Elias Martinez then made a dazzling 42-yard TD catch over two Eagle defenders to give Righetti a 21-10 with 10:10 left in the second.

The 20-yard pass from Claborn to Swanson gave Righetti its 18-point lead. Righetti had a chance to add to its lead when the Warrior defense recovered a fumble at their own 45. The Righetti offense struggled and a low snap on the punt didn't allow the punter to get a kick off. The Eagles took over at midfield and scored on the play from Perrett to Puga.

Martinez came up with an interception before halftime inside his own 10, stopping another Eagle scoring drive set up by Max Wulff's 40-yard catch.

The Eagles fumbled the ball away on the first play of the second half and the Warriors turned that into a touchdown on a sneak by Claborn.

Puga scored on a dazzling 41-yard touchdown to cut the Warriors' lead to 35-25 after Perrett scored on a two-point conversion.

On the ensuing possession, Claborn would tear his ACL. On the play, Claborn scrambled right, then looped back toward the middle of the field and went down awkwardly near the line of scrimmage. He was down on the field in pain and ripped off his helmet.

The Warriors wouldn't score another point, though the Righetti defense held its own for as long as it could.

Cooper Bagby intercepted a Perrett pass at the Arroyo Grande 30, but a penalty against the Warriors pushed them out of range and the drive resulted in a punt.

Perrett found his rhythm and he led the Eagles down the field, resulting in a short Tynes touchdown run.

That made the score 35-32 with less than six minutes remaining. The Warriors punted on their ensuing drive and Perrett marched the team down the field for the game-winning drive.

“Max grew a lot in the spring season,” Hartman said. “We keep asking him to do a little bit more, and a little bit more and sometimes it looks like he’s ready for it and sometimes we have to dial it back. The biggest thing about him is that he’s able to move on. He made a bad read and it got picked. He realizes it’s OK and he plays the next play.

“All of our kids do that and I’m so proud of them. It’s really the best thing that came out of tonight: ‘We play the next play.’”

"Hartman told us we needed a really good week to beat these guys," Tynes said the game. The senior linebacker/running back perhaps made the play of the game, tackling Martinez on his long kick return near the end of the game. "Hartman told us they wouldn't stop and let up and they had us down almost three touchdowns. But we did our jobs. The O-line made their blocks, we kept pounding the ball and they couldn't stop us."

Righetti now plays at Paso Robles next week before closing out the regular season against rival St. Joseph in the 'Battle for the Shield' game on Oct. 29. After he was tackled near the goal line at the end of Friday's game, McCormack was consoled by senior captain Ryan Boivin and Claborn, who was on crutches.

The Eagles will play host to Nipomo on Saturday at 11 a.m. Nipomo canceled its game this week against St. Joseph due to COVID-19 protocols and Saturday, Oct. 23 is the soonest the Titans can play. The game is Arroyo Grande's Homecoming, though the Homecoming festivities will be held next Friday during the JV game.