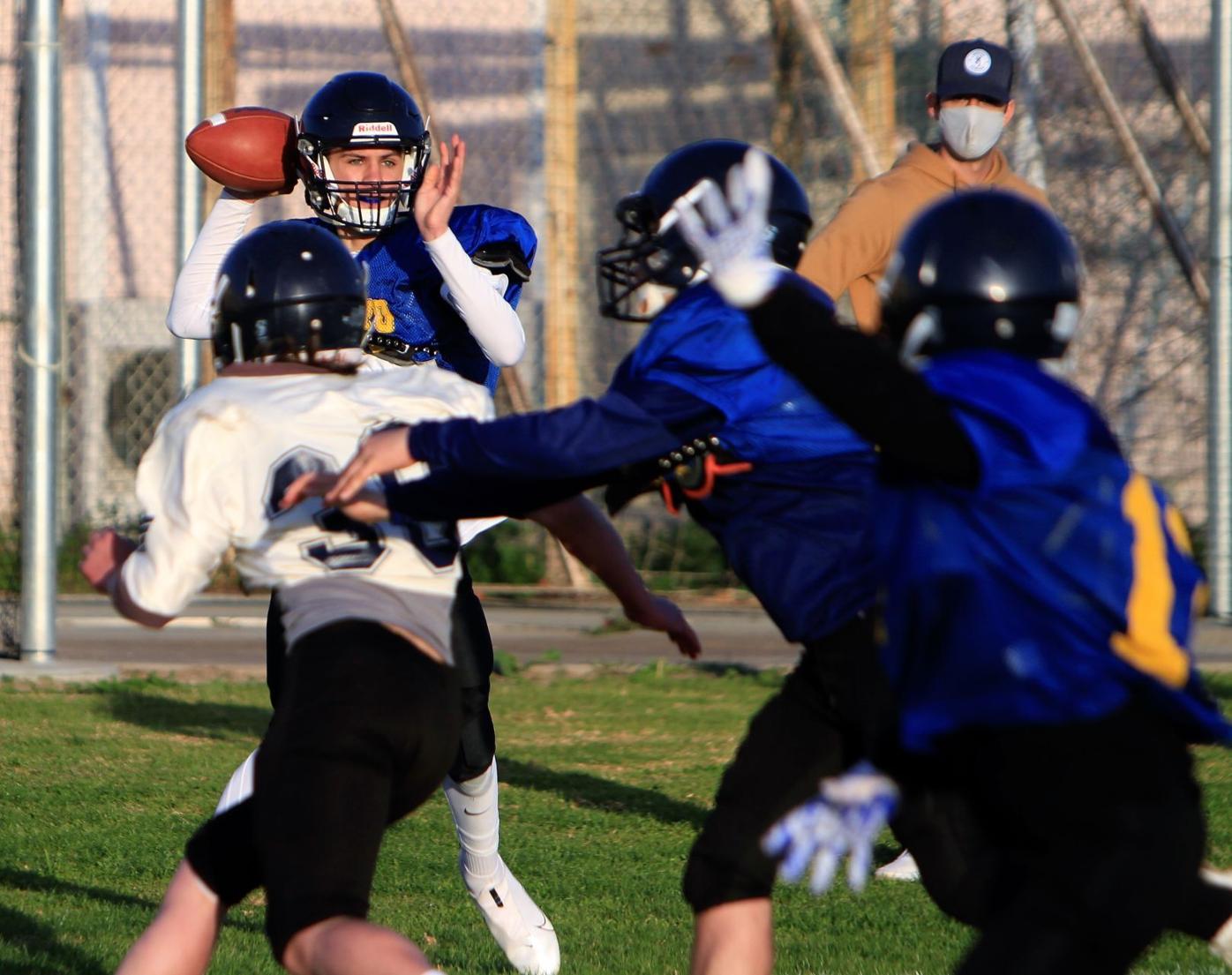 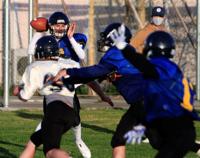 Arroyo Grande quarterback Max Perrett delivers a pass during a recent practice. Perrett, a 6-foot-2 junior, is set to start at quarterback for the Eagles when they kick off their season March 19 at home vs. Righetti. 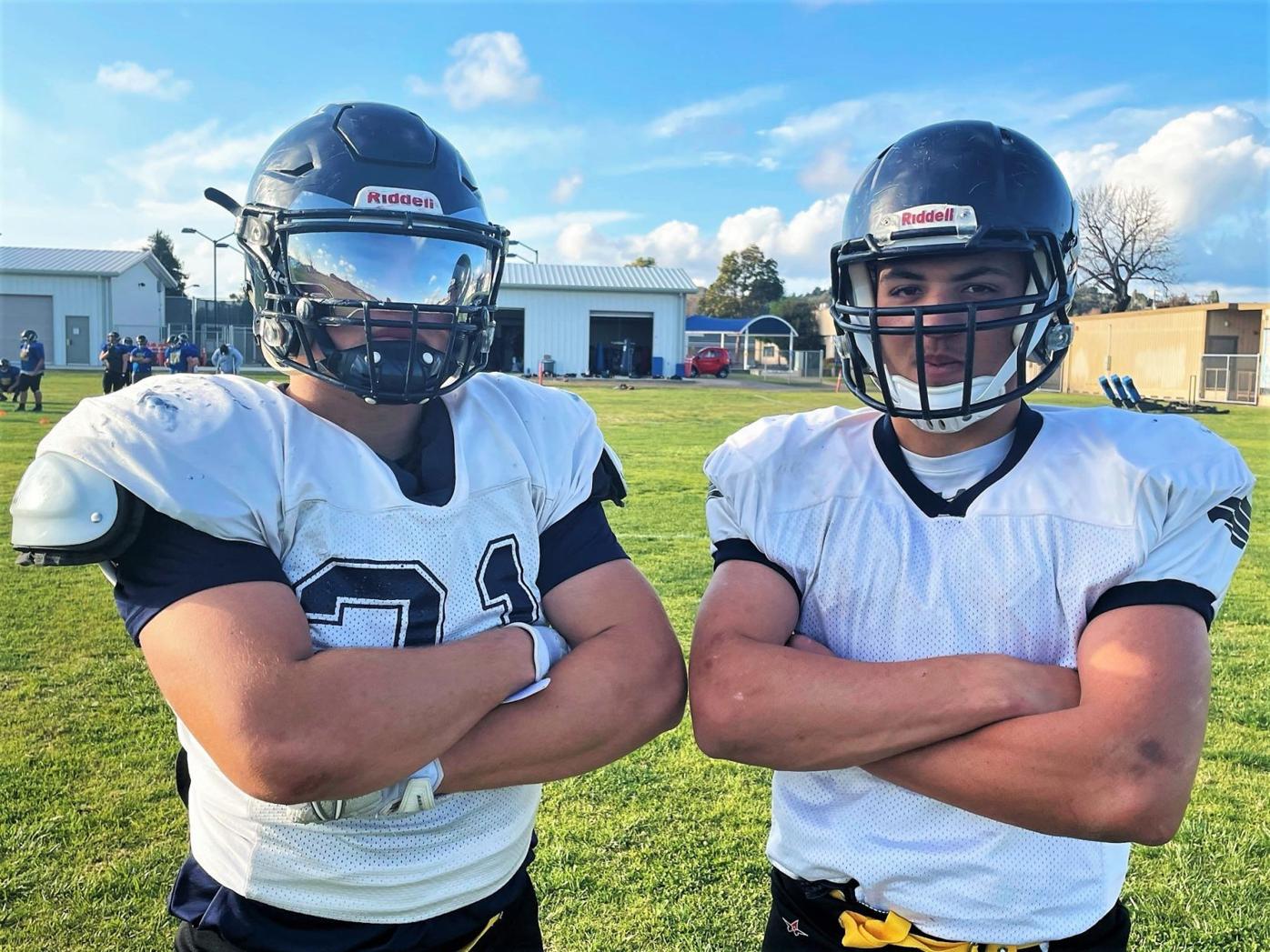 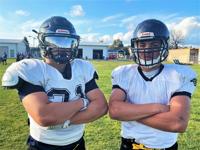 Arroyo Grande seniors Russell Ferrall, left, and Zach Clift, right, will lead the defense in 2021. Ferrall is a linebacker while Clift plays on the defensive line. 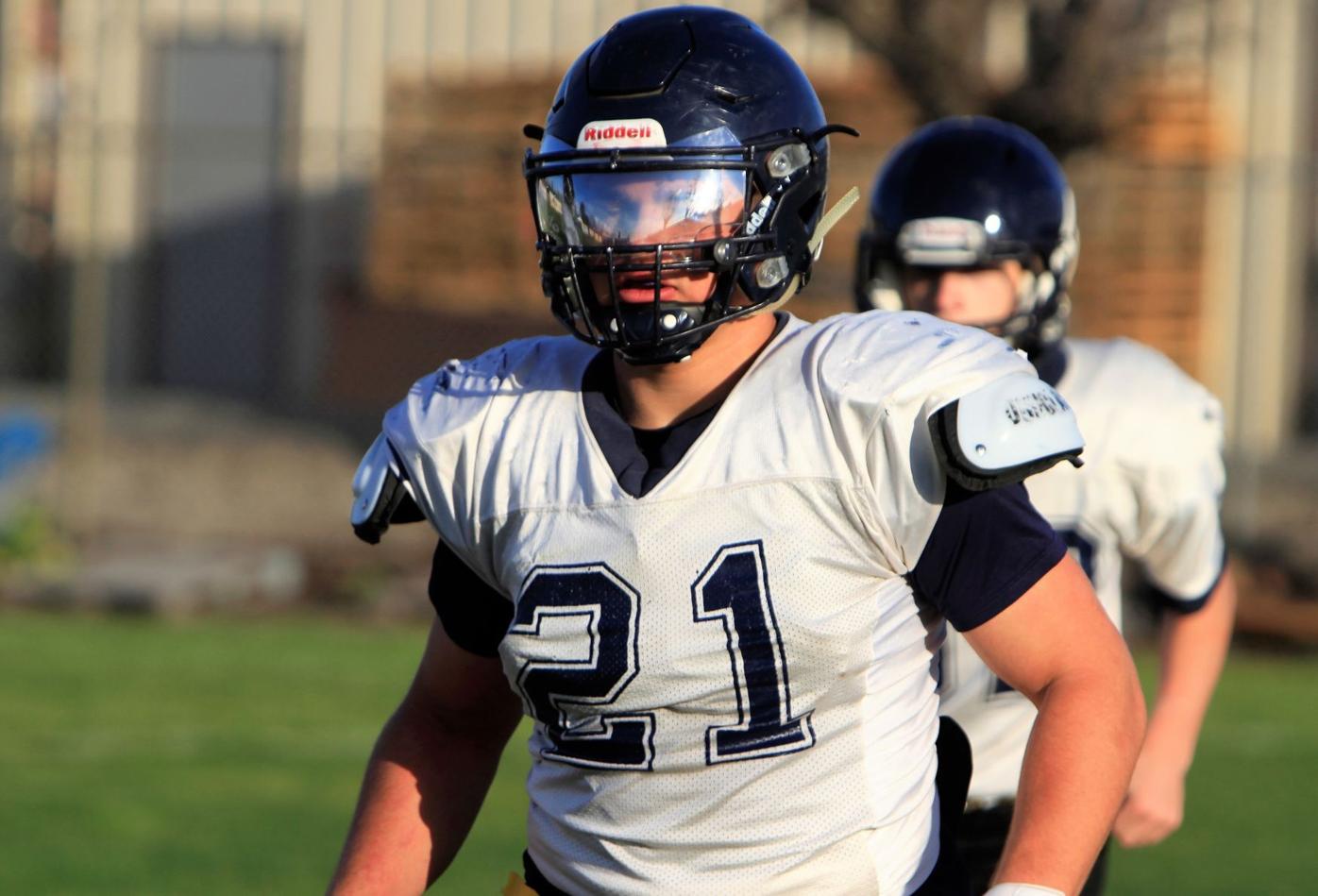 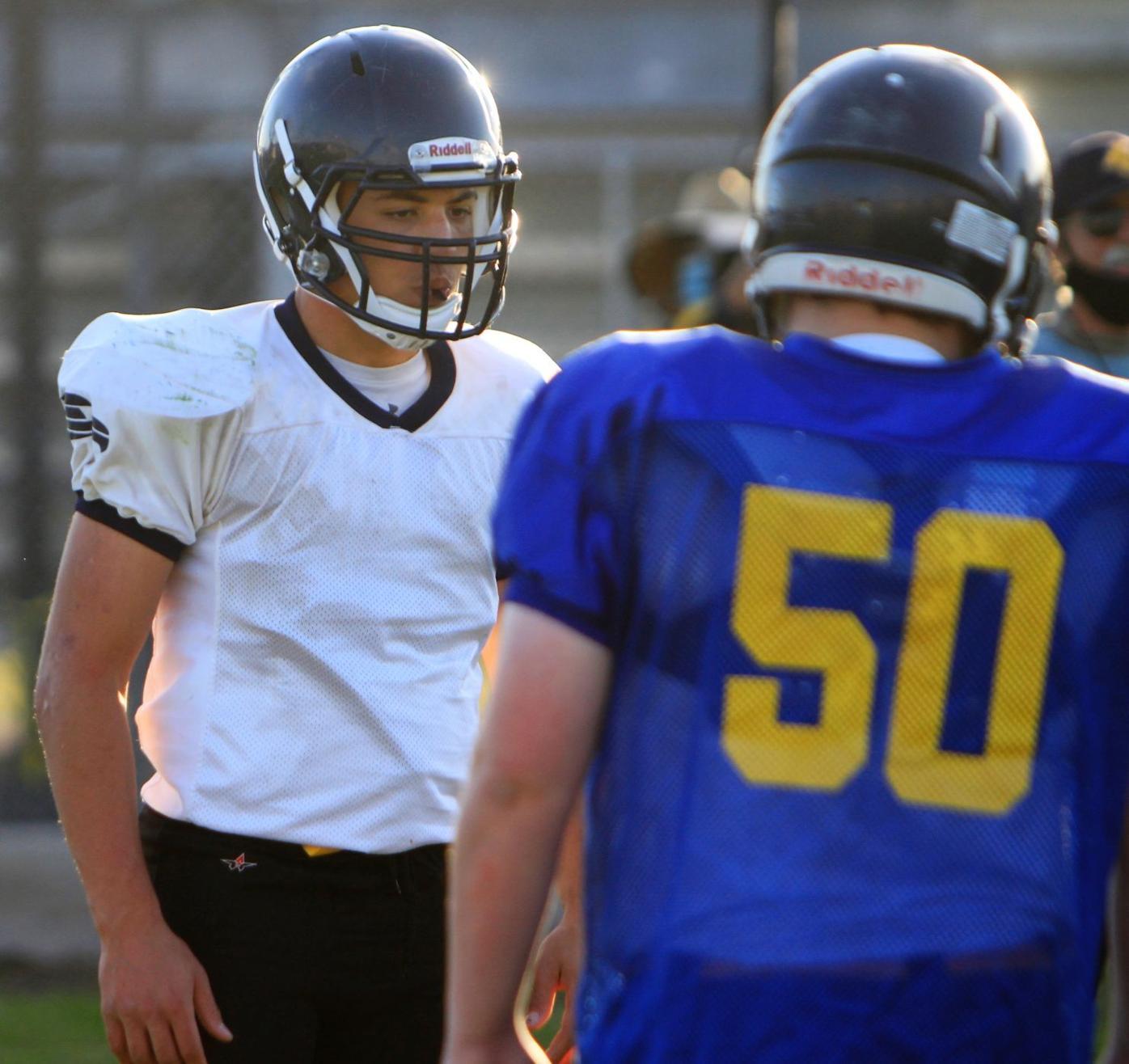 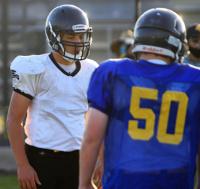 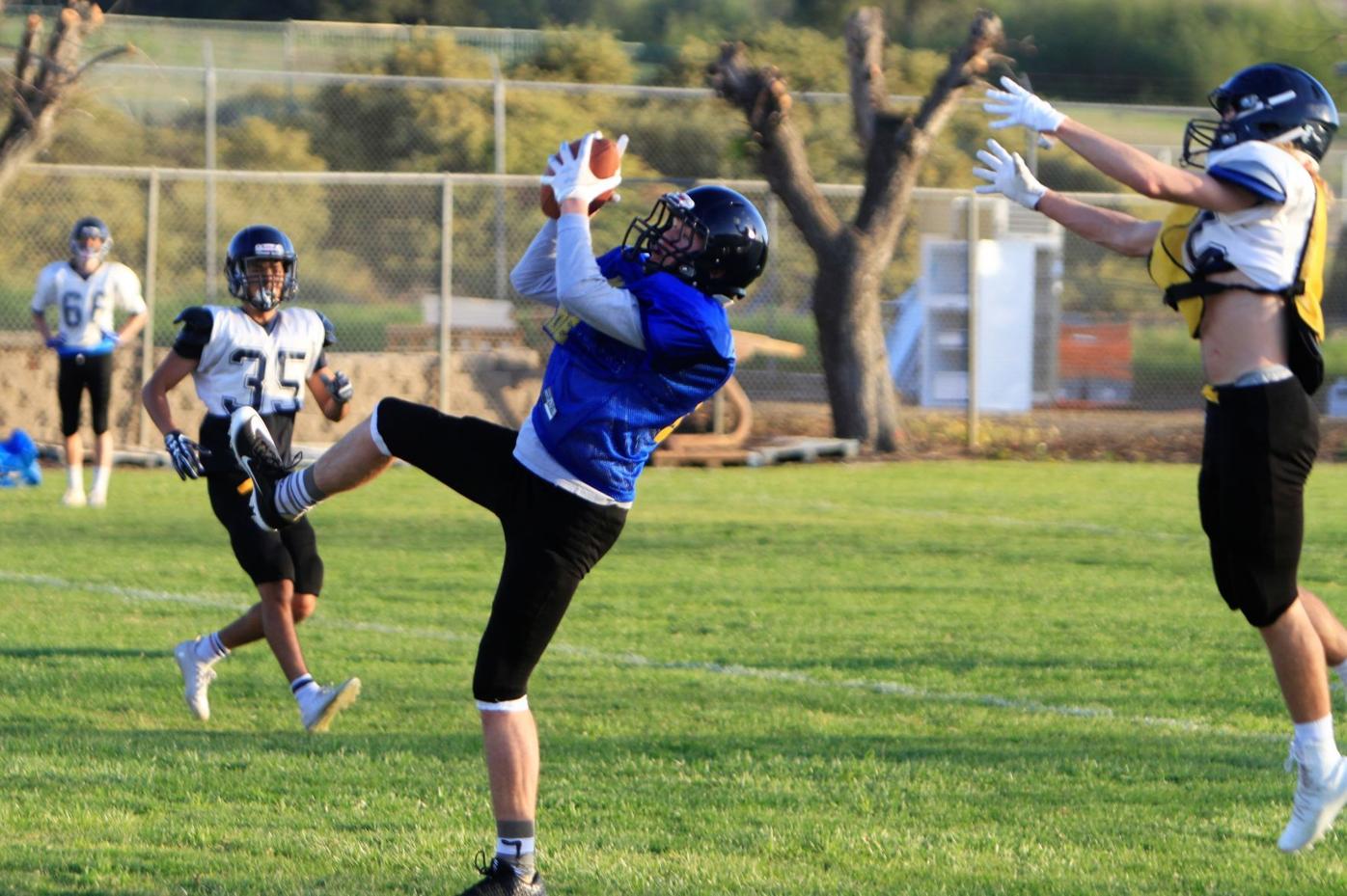 Arroyo Grande quarterback Max Perrett delivers a pass during a recent practice. Perrett, a 6-foot-2 junior, is set to start at quarterback for the Eagles when they kick off their season March 19 at home vs. Righetti.

Arroyo Grande seniors Russell Ferrall, left, and Zach Clift, right, will lead the defense in 2021. Ferrall is a linebacker while Clift plays on the defensive line.

Mike Hartman is entering his fifth season as Arroyo Grande's football coach and it'll be a season unlike any other.

The Eagles are scheduled to play five games this spring, starting with the March 19 home opener against Mountain League rival Righetti.

Hartman, who's gone 31-15 in his first four years in charge at AGHS, still has a positive outlook on a season that's been delayed and shortened by the coronavirus pandemic.

Rather than looking at what this season does not have, Hartman sees what it offers, saying it should give some coaches a chance to "experiment."

"We had all this time, right, and we all had these ideas about what we wanted to do, ideas for this year," Hartman said at a recent practice. "Then this year didn't happen, you didn't get a chance to test those ideas to see if you liked them or didn't like them. Then, all of a sudden, we get this whirlwind where we're going, 'Let's rock and roll,' and then you have to figure out which of those things do you keep, which things are you not ready for.

Hartman has been an innovative coach over the years and that's definitely not changing. He will need that innovation with this odd season approaching. The Eagles will field just a varsity team this spring. Hartman said he's carrying about 55-60 players, though that includes freshmen who may see some playing time on varsity when they'd normally be playing with the freshman or JV teams.

That's fine with the Eagles. They spent a recent 2 1/2 hour practice in pads, happily preparing for any type of football season they can get.

"It's great to be back, I'm so happy for our kids, our seniors especially," Hartman said. "They're playing the game they all love."

Hartman said junior Max Perrett is the starter at quarterback. Perrett has good size at 6-foot-2 and was the starting QB for the JV team in 2019.

"He's doing a great job, but this is going to be his first varsity game," Hartman said of Perrett. "We're expecting big things from him not only this spring, but also this fall."

Hartman said this spring season will also be used to spring into the fall season which is coming up quickly.

Mason Thompson, the top returning rusher from the 2019 season, was not listed on the Eagles' roster. At receiver, the Eagles have Anthony Palermo leading the way.

"The last year has been hard because we were all super motivated in the fall. We were ready to play, ready for a season that kept getting pushed back," Palermo said. "Then it came to a point where we didn't think we'd have a season. Now some of our skill players are playing other sports and we have to adapt."

Palermo said kicking off the season in spring with a limited crowd is going to be a strange feeling.

"No cheerleaders, a smaller crowd, it's definitely going to be different," he said. "It'll be quieter."

"I'm excited to see what Righetti's got, I know they're excited too," Palomar said of the March 19 showdown. "This has been really hard on us so it'll be great to have some normalcy."

Palomar said the long layoff, with the previous season ending in November of 2019, is extra difficult for offensive linemen.

"It's very hard, especially if you're one of those linemen who are the lazy-type, like me. Yeah, it's really hard," Palomar quipped.

Palomar said his goals for the team include not losing this year. He's already looking toward the St. Joseph game. The Knights edged the Eagles 21-14 in 2019 to claim the Mountain League title. The Eagles finished 6-5 last season.

When asked what the team's attitude or style is, Palomar said, "We're respectful. We respect our opponents," he said.

Who's back on defense?

The Eagle offense has some new pieces, but Arroyo Grande's defense has more experience.

Russell Ferrall and Zach Clift are the keystones. Ferrall (5-10, 210) led the team in tackles last season with 93 and he's back at middle linebacker.

The Eagles employ a stacked defensive front with three linemen and three linebackers.

"I'm the leader of the defense, I make sure everybody is in line," Ferrall said. "I'm also 'going' a lot this year, so I'll be the guy making most of the plays."

Ferrall said the gameplan this year includes him playing more aggressively, attacking the ball-carrier and crashing toward the line of scrimmage.

Ferrall said Clift is the key on the defensive front.

"It's a blessing to have Zach on the field, he's a major part for our D-line," Ferrall said. "He can really disrupt the offensive line and he leads the D-line. The defense is a good mix, the secondary is a little young, but I have faith in them."

Clift (5-11, 183) was fourth on the team as a junior with 58 tackles. He led the team with six tackles-for-loss and four sacks. Clift plays on either end of the three-man front and could even play in the middle this year.

Santa Maria girls golf: Saints happy to be back on course

"I'd say I'm pretty fast off the snap and I have OK arm-work. My speed helps get me around the linemen," Clift said. "They're a little slower than me. The defensive line is looking alright, we do have some younger guys and they don't have the same fundamentals our seniors have. We're learning, we're getting there."

Many of the seniors in the area are having to guide much younger players this spring. With participation numbers down due to the pandemic, many freshmen and sophomores have been practicing with the varsity players.

"I try to help them out because the game is a lot more aggressive up here on varsity," Clift said. "We've got to make sure they know what they're doing and they've got to be aggressive. Don't stop until the plays over."

After the season-opening game vs. Righetti, the Eagles host St. Joseph in the second week of the season, on March 26.

More in Spring football starts on Friday! Read our team previews here (5 of 10)

They're back: Saints don pads to prep for March 19 opener at Morro Bay