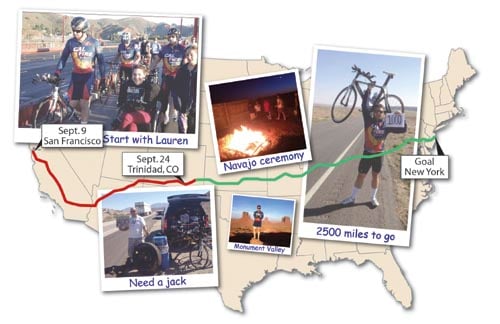 John Byrne, a Cal Fire engineer, has reached Colorado on his cross-country bike trip to raise money for a specialized vehicle for his sister, Lauren. 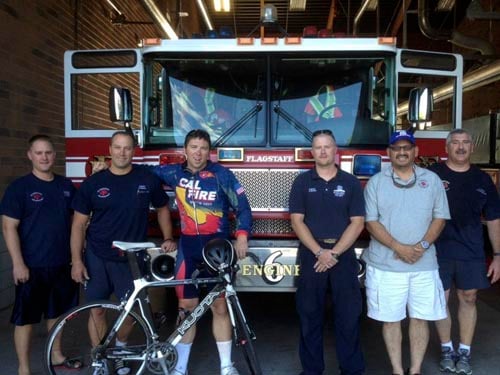 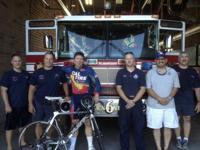 In Flagstaff, Ariz., members of the International Association of Fire Fighters provided a motorcycle escort from the city limits to the station Sept. 17.

John Byrne, a Cal Fire engineer, has reached Colorado on his cross-country bike trip to raise money for a specialized vehicle for his sister, Lauren.

In Flagstaff, Ariz., members of the International Association of Fire Fighters provided a motorcycle escort from the city limits to the station Sept. 17.

NAVAJO NATION, Ariz. — John Byrne wasn’t even breathing hard as he pedaled another 77 miles across the Arizona desert Wednesday, nearly 1,000 miles into his cross country ride. He’d spent the night among the Navajo, been treated to a ceremonial sweat and was recovering from a cold.

“You wouldn’t believe the trip I’m having. I wish everyone could experience all the acts of kindness I get to see every day,” the Nipomo-based Cal Fire engineer said while riding northeast on the Navajo Trail.

With the support of fire associations across the nation, Byrne’s 36-day, 3,600-mile ride from Golden Gate Bridge to Brooklyn Bridge aims to raise money for a specialized vehicle for his sister, Lauren Byrne of Newark.

Lauren was 15 years old when she injured her spine and nearly drowned after jumping into a pool. Now using a wheelchair, with limited mobility in her arms, she continues to inspire her brother and others as she attends college, plays wheelchair rugby and works toward her dreams.

While Lauren studies and practices for her driver’s license test, John continues to pedal east.

“She’s really excited, so when I’m having a hard time, I think about the hard times she’s gone through and it helps keep me going. She’s never given up. She’s very positive, very active,” he said.

Family, friends and firefighters have promoted the ride and organized special events along the way, including a spaghetti feed Sept. 7 in Nipomo and another in Byrne’s hometown of Fremont the following evening.

On Sept. 9, Byrne lifted his bike at Golden Gate Bridge, hugged his family and friends goodbye and pedaled into the sunrise. Tony Hernandez, training captain for Cal Fire San Diego, has joined the ride as support vehicle driver.

“The first few days, I was running on adrenaline alone,” Byrne said.

To date, supporters of the ride have donated more than $44,000 toward the goal.

Mapping problems were the team’s first stumbling block. Electronic maps planned for the trip wouldn’t load, so the pair meandered down the coast, then inland through the Central Valley until help arrived in the form of knowledgeable fellow firefighters.

“That’s pretty much how we’re doing this whole thing. We have an issue come up, we just keep moving forward and working together. You keep riding in the right direction, you’ll get there,” Byrne said.

Byrne and Hernandez continued through California with stops at fire stations in Pajaro Dunes and Coalinga, where completed mapping software and upgraded hardware put them back on track. They stopped again in Kern County, Mojave and Newberry Springs.

“Everything has lined up on this trip,” Byrne said.

But not everything has gone smoothly. The cyclist and his support crew had hoped to stay at fire stations all the way across the country, but coordinating the effort has been challenging. A flat tire on the chase vehicle in Mojave Desert was made particularly challenging when the jack broke.

Still, the solution came easily when a Good Samaritan pulled over and offered a hand.

“Every bad thing that happens turns into something good. There’s nothing we can’t do with the kind of support we’re getting,” Byrne said.

The hospitality from fire departments has been nearly overwhelming.

Kern County Fire Department organized media coverage and a fundraising pizza feed. In Flagstaff, Ariz., members of the International Association of Fire Fighters provided a motorcycle escort from city limits to the station.

“It’s all happening because of Lauren’s positiveness. No matter whathappens in your life, you can always decide to keep positive.”

In Arizona, the team found itself welcomed by the Diné — the Navajo people.

“When they found out more about what we were doing, they put us in a ceremonial sweat lodge. It was very moving. There were a lot of prayers for a safe journey. I felt very connected. It meant a lot to me,” Byrne said.

After a short pedal through a corner of Utah and a stop at Four Corners Monument, the ride continues this week through Colorado.

“The Rockies are coming up,” Byrne said with a little trepidation.

The team regularly provides blog updates featuring Hernandez in silly hats that he picks up at thrift stores along the way. To follow along, visit laurensride.org.

Freelance reporter Jennifer Best can be reached at jbest@bestfamilyadventures.com.