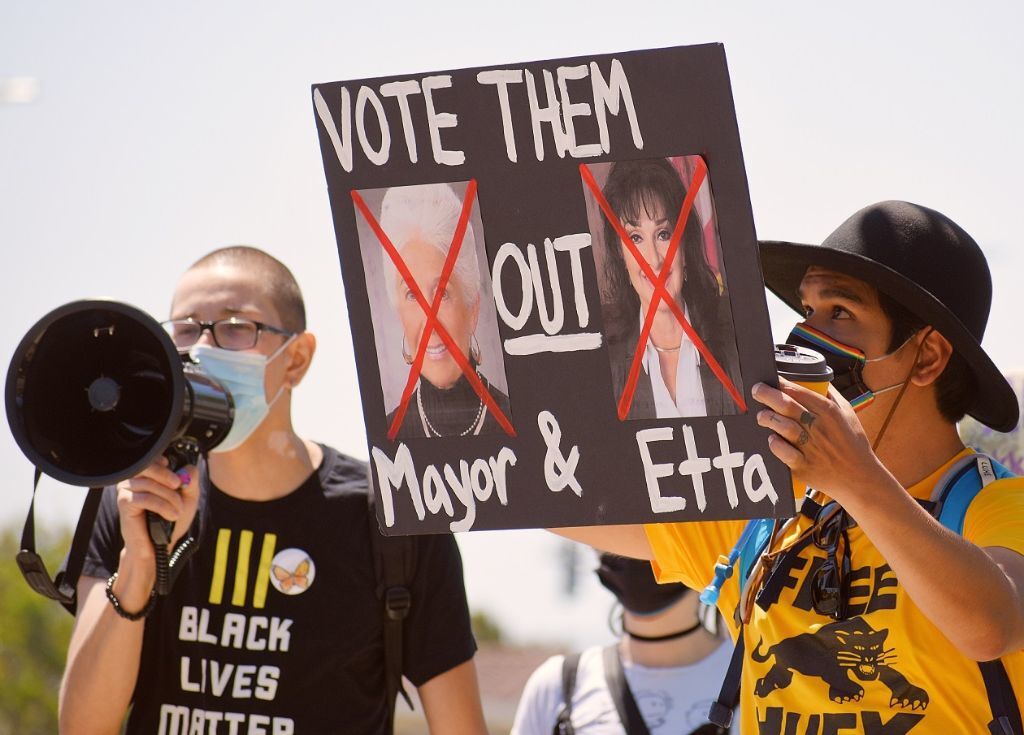 Participants Chuy Caracoles, left, and Orel Alcanpar lead protesters on Skyway Drive and West Betteravia in Santa Maria during a demonstration against Immigration and Customs Enforcement (ICE) on Saturday while holding a sign calling for the removal of City Councilwoman Etta Waterfield and Mayor Alice Patino, citing a lack of support for the undocumented community. 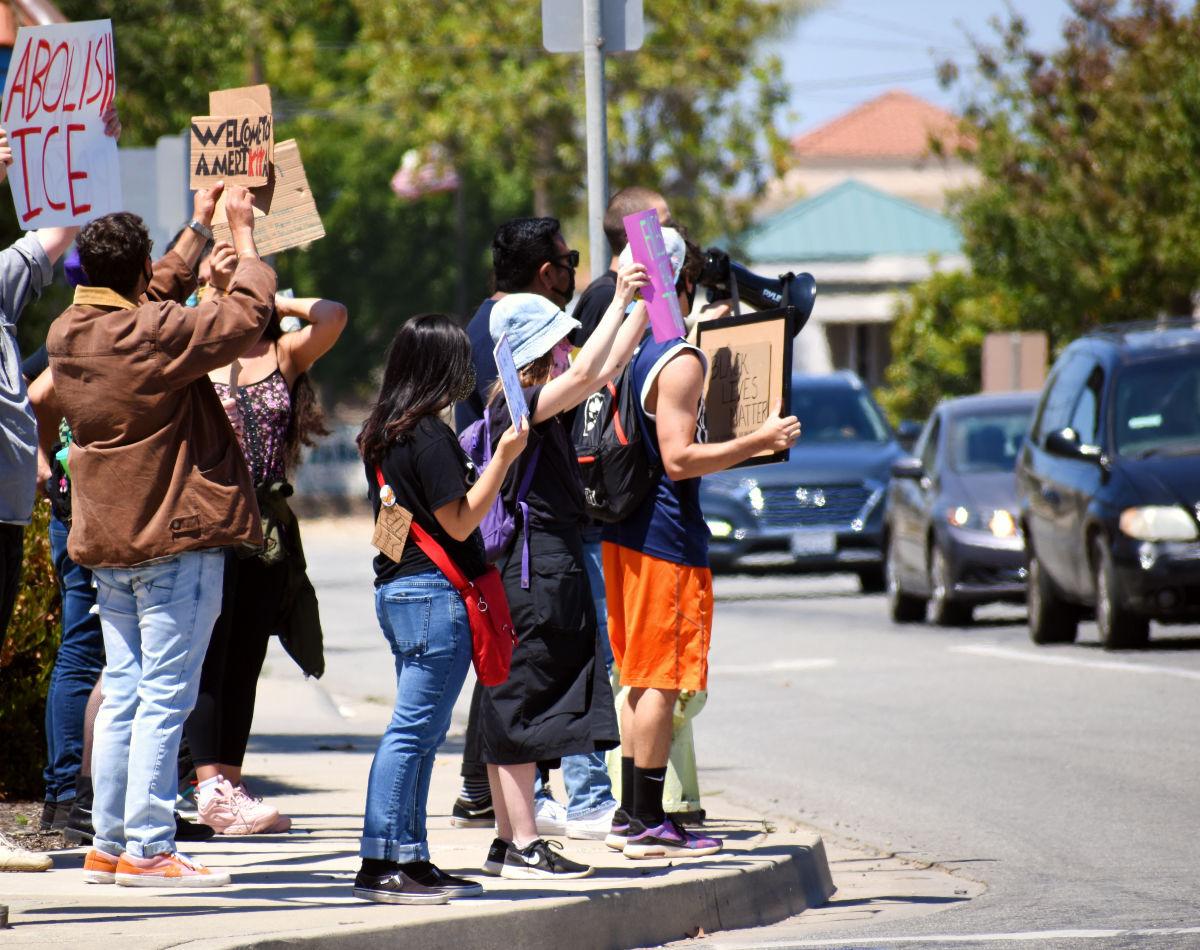 Protesters take to Broadway in a rally against Immigration and Customs Enforcement (ICE) on Saturday in Santa Maria. 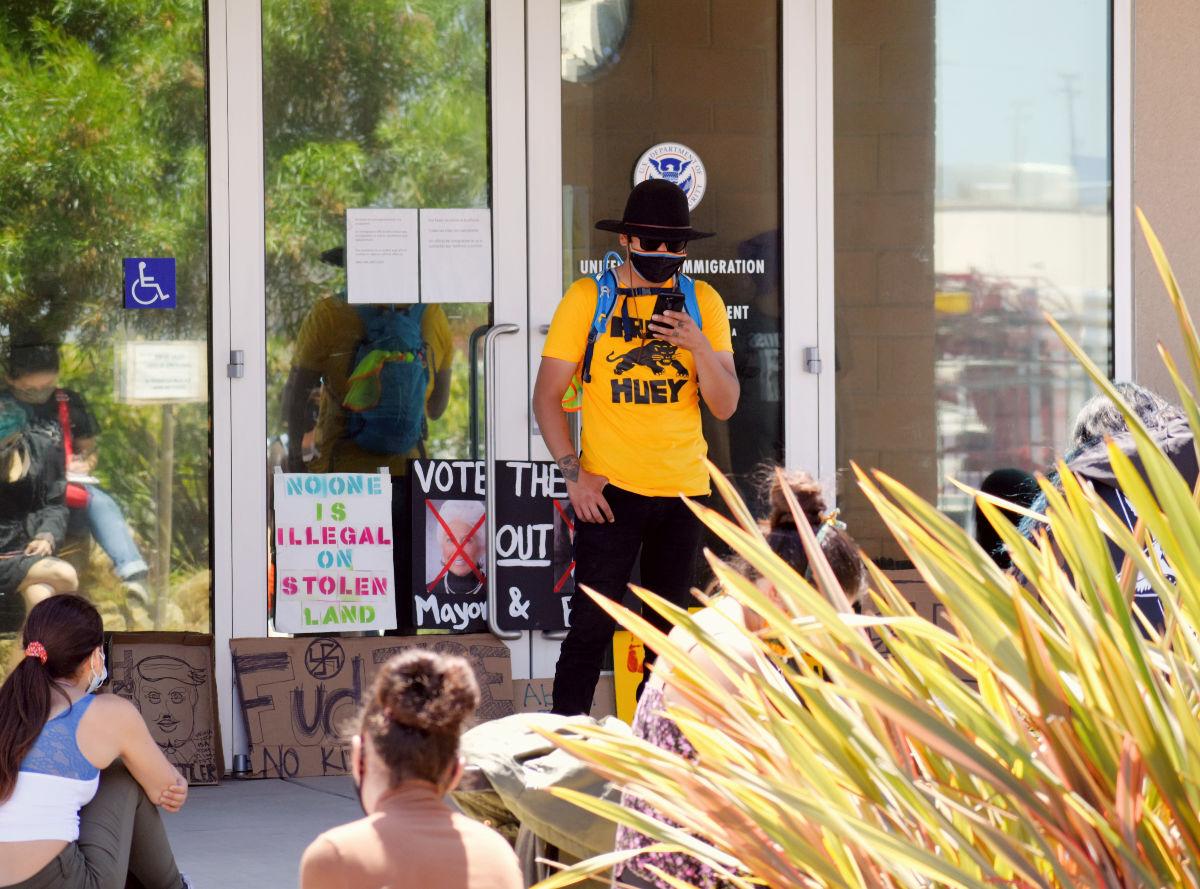 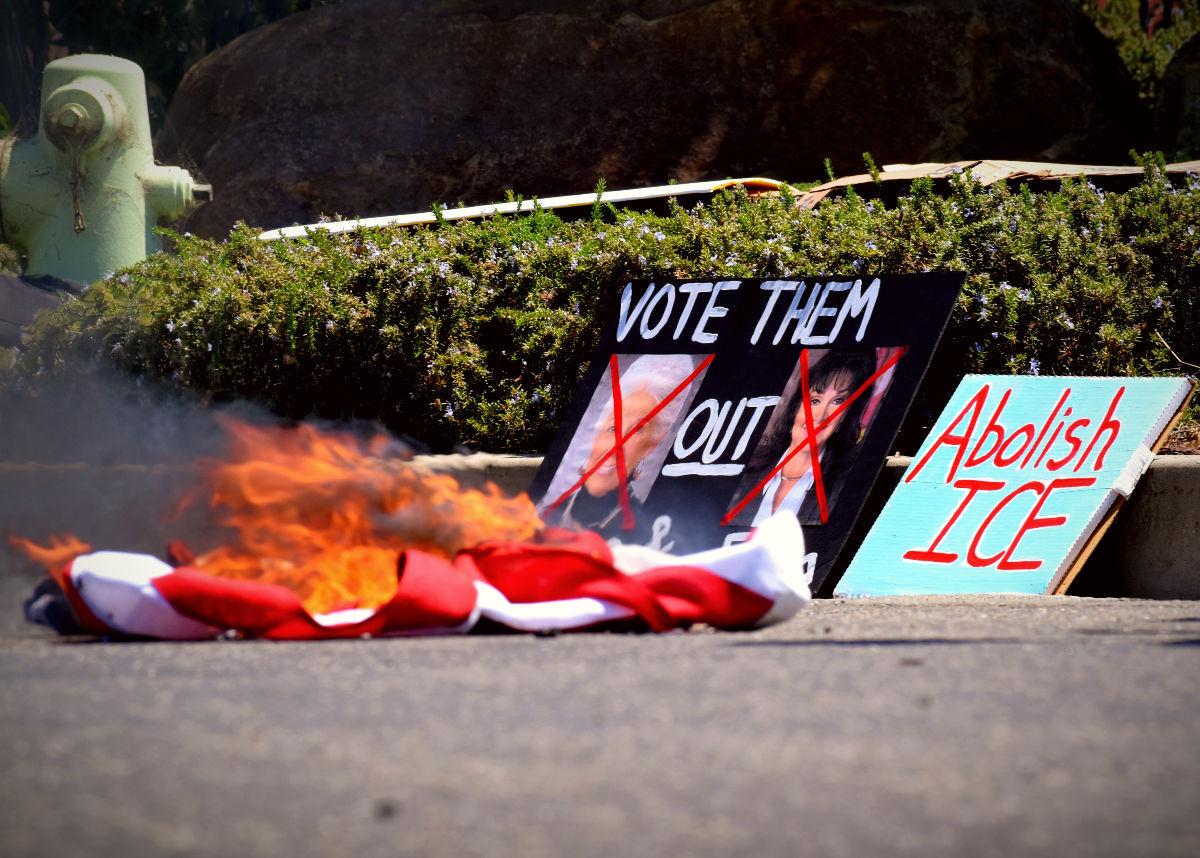 An American flag was set on fire at the conclusion of a Saturday demonstration against Immigration and Customs Enforcement in Santa Maria.

About 30 protesters gathered Saturday for a march through Santa Maria that led to the Immigration and Customs Enforcement (ICE) office, where participants called for change in the treatment of the undocumented community, in local leadership and in the funding of local police.

The group, which gathered at 11 a.m. outside Kohl's on South Broadway, walked northward on Broadway, then turned on Betteravia Road toward the Santa Maria Police Department before heading south on Skyway Drive. Protesters then turned on Depot Street toward the Immigration and Customs Enforcement (ICE) office at 740 Century St., which was closed for the day.

The action was not led by any single organization but included various community members with support from the Santa Maria Youth Abolitionists, said Santa Maria resident and protest attendee Chuy Caracoles.

"It's basically just members of the community," Caracoles said, looking at the individuals seated outside the doors of the facility with signs stating "Families belong together" and "Melt ICE."

While not a detention center, the site serves as a processing and holding area for individuals recently released from local prison or jail who may be subject to deportation following their release, as described by Los Angeles Field Office Deputy Director David Marin in 2015.

Outside the ICE facility, participants held a teach-in, discussing the need for defunding of local police, or limiting police budgets to reallocate money to other community services, as well as the need for further support of farmworkers and undocumented individuals on the Central Coast.

Attendees Jackie Vargas and an individual named Bam said they chose to participate in the event because of deep connections to the subject of undocumented and immigrant rights, having had family members deported themselves.

“It’s a touchy, personal topic for us. It’s something we both feel strongly about,” Vargas said.

Bam described how deportation threatens the basic rights of those who are just looking to support themselves and their families.

"It's a thing that happens, and that's why we're here to fight things like that, so future generations don't have to live through this trauma," Bam said. "There are people who are coming here literally to work. We're all human beings and deserve basic human rights."

One criticism expressed by participants was the lack of action by the Santa Maria City Council to divert more budget funds from the Santa Maria police toward other community resources in the most recent budget cycle.

While cuts were made to the department due to the COVID-19 financial crisis, police retained the largest cut of the pie with $33 million allocated for the 2020-21 fiscal year.

Nipomo resident Orel Alcanpar encouraged participants to vote in the upcoming election, calling on them to vote for leaders who will make local change such as granting more rights to farmworkers, fighting systematic racism and cutting the police budget.

"It's hard to believe in politicians, but we can at least vote some of them out," Alcanpar said.

Outside the office, Caracoles presented demands for local, regional and state leaders, asking Gov. Gavin Newsom to close down all ICE facilities in the state and Congressman Salud Carbajal to create a farmworker bill of rights with protections for workers such as a ban on pesticides in the fields.
They also listed demands for the Santa Maria City Council to defund the local police department, and for school districts in Santa Barbara and San Luis Obispo counties to include material about the atrocities committed by founders of the Spanish missions against indigenous populations.
Controversy has swirled in recent weeks over the statue of Junipero Serra outside the Catholic Mission in Solvang, with residents calling for the statue's removal and highlighting historical records of Serra's mistreatment of Native Americans during his ministry between 1769 and 1823.
Participants in Saturday's event also discussed plans for a protest outside the mission, planned for Aug. 22.
At the end of the event, some participants held a flag burning on West Century Street.

Santa Maria Police are investigating a shooting that injured a juvenile on East Orange Street Sunday.

Santa Barbara County Sheriff's deputies are investigating the death of a 30-year-old woman who drowned near Bradbury Dam at Cachuma Lake on Sunday.

Mossimo Giannulli, fashion designer and husband of actress Lori Loughlin, will serve prison time in Lompoc after he pleaded guilty to a felony charge related to the college admissions bribery scandal.

Participants Chuy Caracoles, left, and Orel Alcanpar lead protesters on Skyway Drive and West Betteravia in Santa Maria during a demonstration against Immigration and Customs Enforcement (ICE) on Saturday while holding a sign calling for the removal of City Councilwoman Etta Waterfield and Mayor Alice Patino, citing a lack of support for the undocumented community.

Protesters take to Broadway in a rally against Immigration and Customs Enforcement (ICE) on Saturday in Santa Maria.

An American flag was set on fire at the conclusion of a Saturday demonstration against Immigration and Customs Enforcement in Santa Maria.