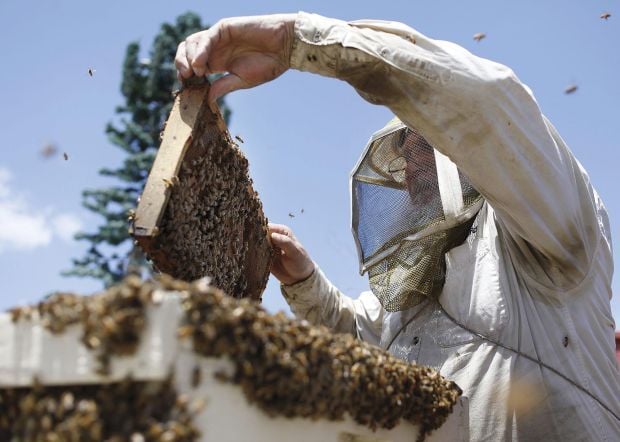 Ron Gromak lifts a panel of bees in a box he keeps in Santa Maria. Gomak, president of the Santa Maria Bee Association, advises preparation and patience when dealing with a surprise swarm of bees. 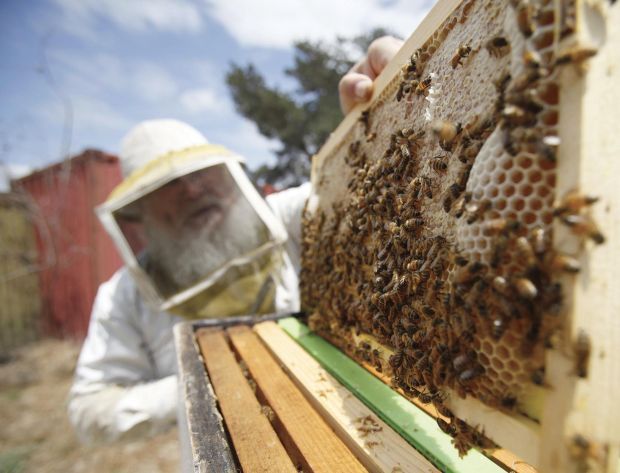 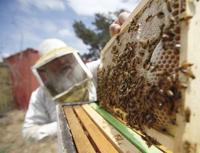 Ron Gromak tends to his bees on his property in Santa Maria. He is the head of the Santa Maria bee keeping association.

Ron Gromak lifts a panel of bees in a box he keeps in Santa Maria. Gomak, president of the Santa Maria Bee Association, advises preparation and patience when dealing with a surprise swarm of bees.

Ron Gromak tends to his bees on his property in Santa Maria. He is the head of the Santa Maria bee keeping association.

If April showers bring May flowers, then what do May flowers bring? Bees. Swarms of them. That’s right, it’s bee swarm season on the Central Coast. However, all that buzzing and busywork shouldn’t be anything to fear, according to local beekeepers.

Not only do they not want to sting you, they can’t.

“They are fat, happy bees looking for a home,” said Ron Gromak, president of the Santa Maria Bee Association.

He explained that the bees actually engorge themselves with a few days worth of honey, so not only are they not interested in stinging, they simply can’t sting someone.

“What they do is take the old queen and half the goods of the old hive and they start a new one. We believe it’s crowding,” said Cynthia ‘Thea’ Bodger, a beekeeper from Nipomo. “Nobody really knows why bees swarm, but they are reproducing,” she said.

As they house hunt, it’s common for beekeepers to get calls from people concerned because a swarm has stopped on their porch or backyard. However, usually the stop is temporary and nothing to fear.

Arroyo Grande beekeeper Shelley Davis said the majority of swarms will move on within 24 hours.

“A moving swarm is very gentle. Unless they’re an established colony, they are nonaggressive, so there’s a good chance they’re leaving. They just don’t have anything to protect,” Davis said.

Davis usually advises people to stay away from the swarm and wait until evening. Beekeepers can’t remove the bees until the evening, anyway. During the days, the swarm sends out scout bees to find a location while the swarm hangs somewhere and waits. The scouts return to the swarm in the evening.

Beekeepers wait for the scouts to return, then gently tap the swarm into a box without even using a protective bee suit. Then, they take the box of bees and relocate them a few miles away.

Though it is swarm season, bee swarms overall have decreased, most beekeepers said, as determined by fewer calls for bee removal.

“Normally I get lots of calls from Santa Maria city. They have gone down to nearly zero,” Gromak said.

Many beekeepers suspect the decline in calls is because many bees are succumbing to neonicotinoids. The pesticide was recently banned in the European Union because of the suspected link to colony collapse disorder, but it is still in use in the United States in absence of a proven link.

While most beekeepers are seeing a decline in the number of swarms spotted on the Central Coast, Lompoc beekeeper Archie Mitchell said he’s experienced just the opposite.

“It’s been very busy. In fact, I just got a call tonight about a swarm,” he said.

Mitchell, who is a member of the Western Apicultural Society, helps remove swarms and relocate them. He also makes and sells local honey from the bees. He said beekeeping is a fascinating hobby.

“It’s interesting the fact that we are so dependent on bees for our food supply. And people, out of ignorance, kill them or call exterminators to kill them,” Mitchell said.

Last week, the U.S. Department of Agriculture released a report saying officials still don’t understand the cause of colony collapse disorder but think it’s a combination of viruses, bacteria disease, the varroa mite and neonicotinoids.

Mitchell said he supports the concept of sustainable beekeeping, which is described as creating a diverse gene pool bred to be resistant to some of the suspected causes of colony collapse disorder.

While some cities don’t allow backyard beekeeping, there are some things you can do to attract the beneficial bees to your yard.

Plant flowers they like, such as lavender or rosemary, Bodger said. Bee hobbyists also will often put a bait box like an old trunk or a wine barrel out as an attractive place for bees to call home.

Gromak said even if you don’t have a garden, there are a variety of beneficial uses for bees.

He began keeping bees for the stings, which he said helps carpal tunnel syndrome.

“Everything from bees has an advantage. About 20 percent of pollen is protein. Honey can act as an antibiotic and can be used to treat burns. Wax is used in things like candles. Everything in the colony including the bee sting has a usage,” Gromak said.

Getting stung shouldn’t be a fear if a swarm arrives, however beekeepers still caution people to stay away from the swarm. If the bees have started a comb, then it means they are setting up shop and will get aggressive if they are disturbed.

If you see a swarm:

• Don’t panic. Swarming bees can’t sting, because they are engorged with honey

• Don’t disturb the swarm. Usually, they will leave on their own within 24 hours

• Call a beekeeper who can remove and relocate the swarm:

• Repair any holes in your eaves

• Clean up debris in your yard