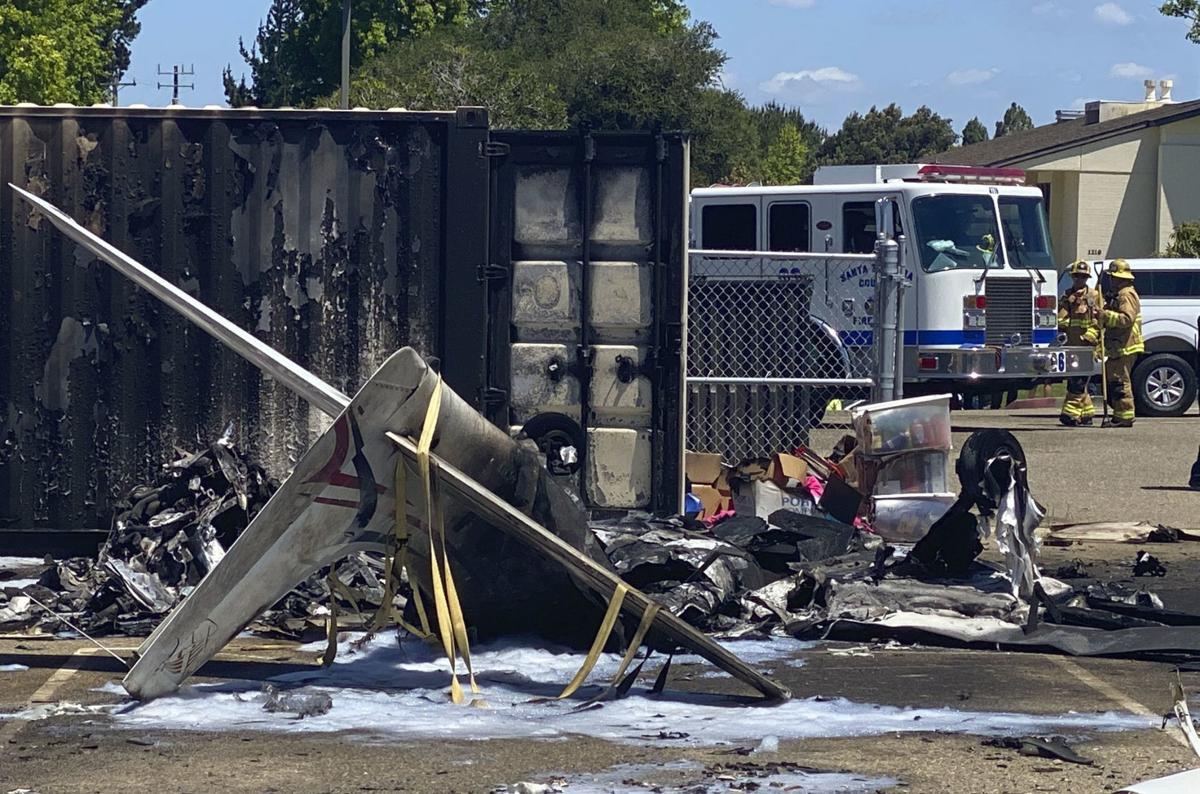 The tail and charred remains of an airplane lie on the playground at Dunlap Elementary School where it crashed Wednesday morning, killing the pilot. 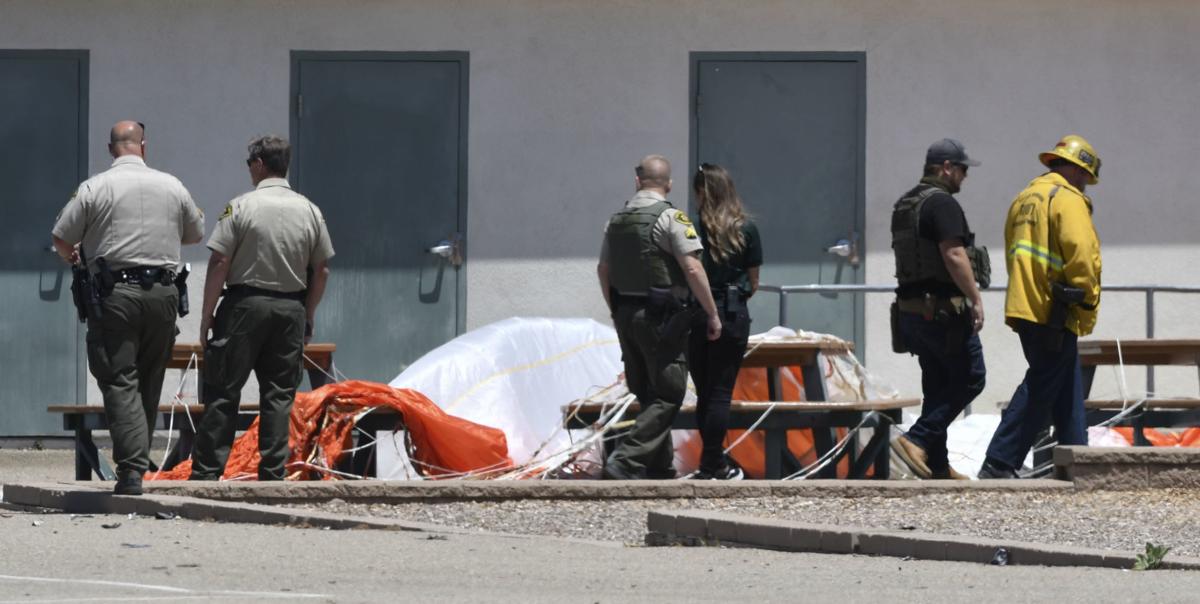 Officials examine a parachute near where a plane crashed Wednesday morning at Dunlap Elementary School, killing the pilot. 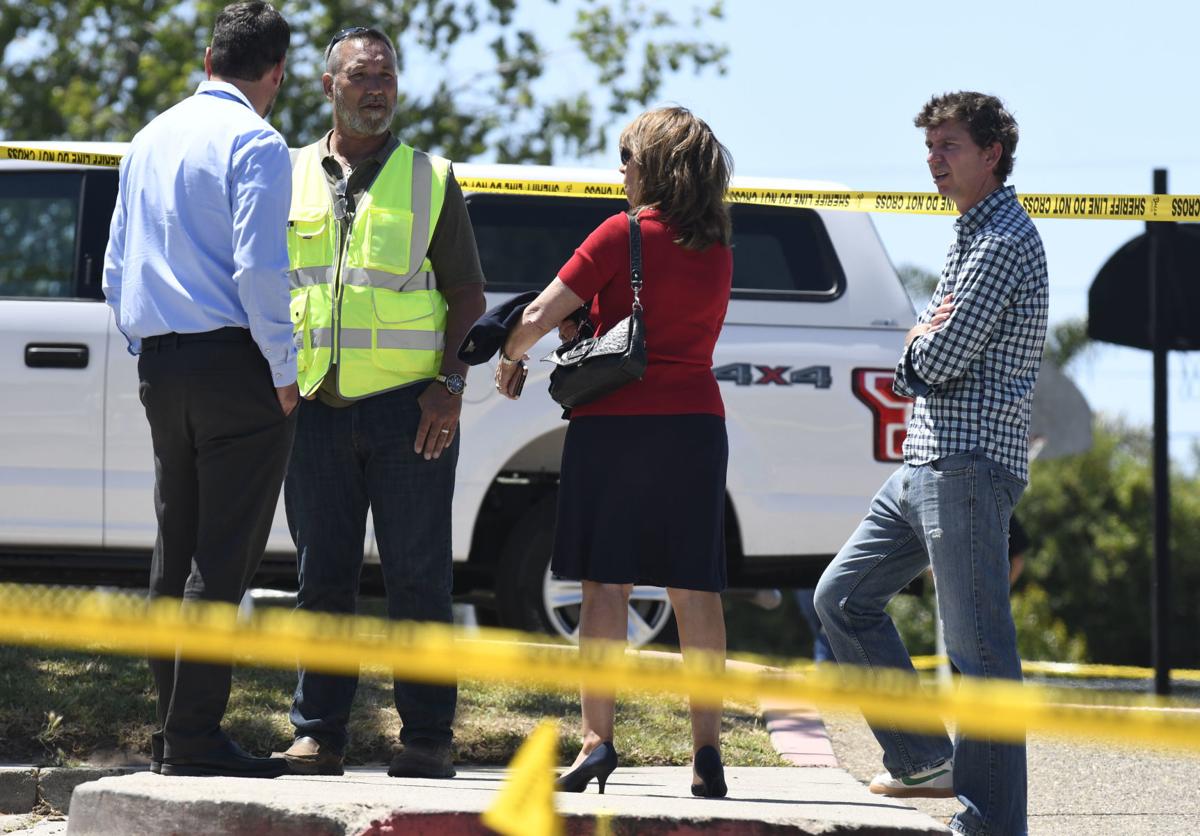 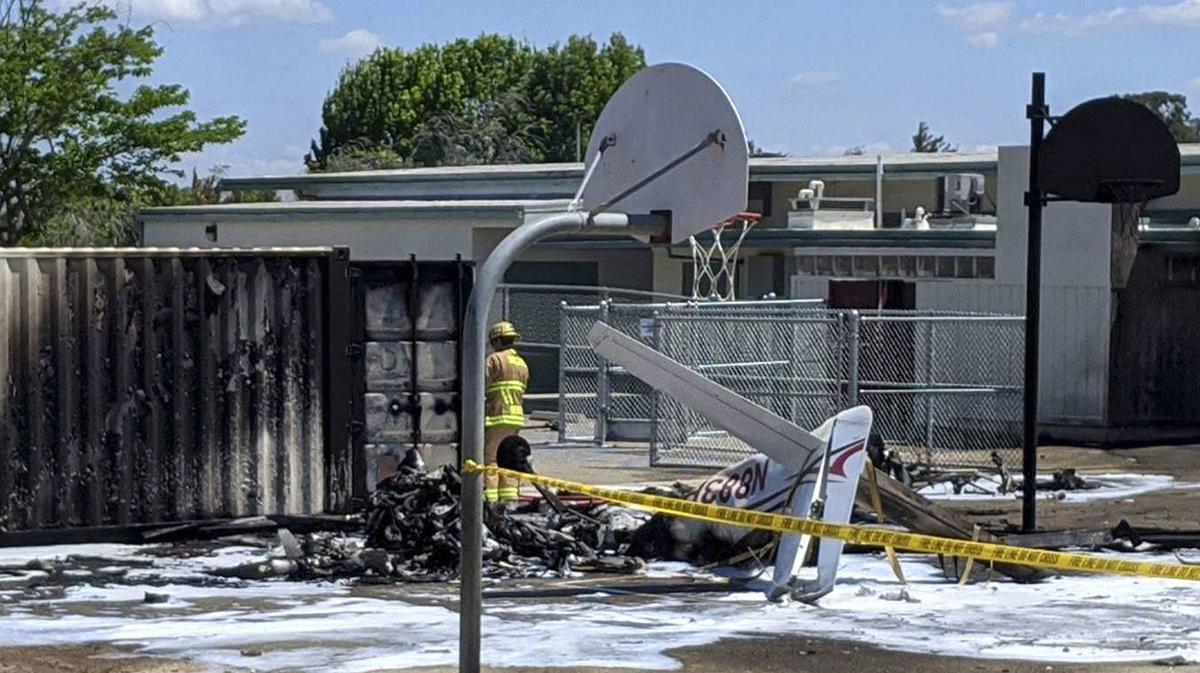 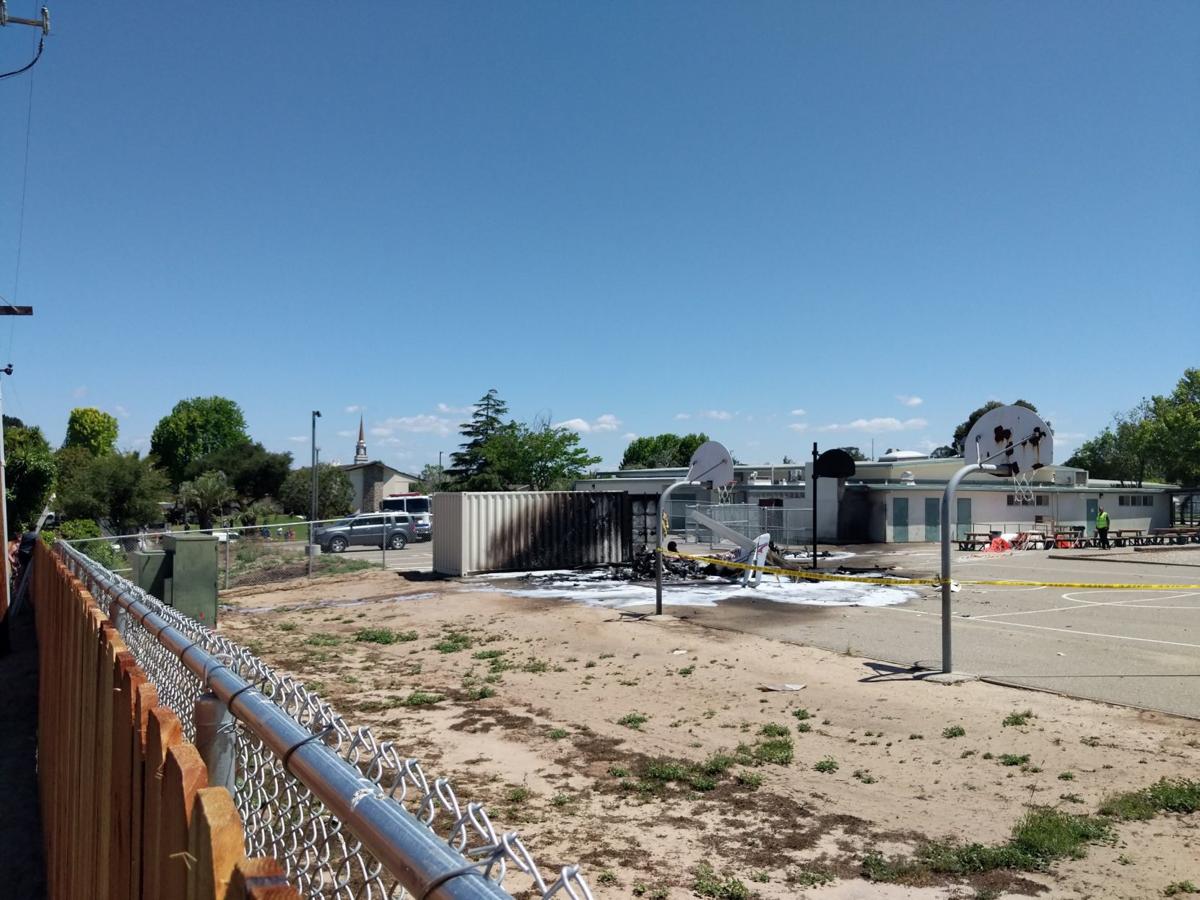 A small plane crashed on the blacktop behind Ralph Dunlap Elementary School on Wednesday morning. Officials said the pilot died in the crash.

County Fire Capt. Daniel Bertucelli said the aircraft sustained significant damage and burst into flames when it came down between basketball hoops, sending up a column of smoke visible throughout the neighborhood.

“There was a significant header of smoke coming from this area,” Bertucelli said. “The first responding engine company was reporting heavy smoke from a significant distance away.”

The pilot, who was the only occupant, died in the crash, but no one else was injured, Bertucelli said.

“There were no children in the area at the time, and there’s minor damage to some exterior containers but no damage to the school,” Bertucelli said.

He said little was known about the pilot or the aircraft, except that it was a private plane and not one associated with the military. He also said there was a parachute coming out of the back of the craft but it was unknown if it was from the plane or the pilot.

A resident whose backyard abuts a corner of the school said he heard the crash.

“I was sitting in the chair [and] I heard this loud, terrible, terrible blast,” said Floyd Osborn, a resident of Barnette Road. “And I just stepped out because I thought it was our house. And then all of a sudden I saw the smoke coming.”

Osborn said he ran toward the school, where someone tried to call 911 but couldn’t get through, apparently because of the volume of calls.

“It’s funny, because the basketball poles — they’re not bent or anything, so they didn’t get hit,” Osborn added. “So I don’t know if it fell straight down. … I thought our house was hit. The way it sounded from mine — terrible.”

The registration number partially visible on the burned airplane included N883, and the website flightaware.com, which tracks aircraft, showed a potential flight that could have been the one that crashed.

A Cirrus SR20 with registration number N883PJ, owned by West by Southwest Investments LLC, left Van Nuys Airport at 9:45 a.m. on a direct flight to Santa Maria Public Airport traveling about 145 mph at an altitude of about 6,300 feet.

The Cirrus SR20 and SR22 are both equipped with all-aircraft parachutes designed to deploy in the case of an in-air problem and lower the aircraft safely to the ground, provided the plane has sufficient altitude when the 'chute is deployed.

The Santa Barbara County Sheriff’s Office, the National Transportation Safety Board and the Federal Aviation Administration are conducting the investigation into the crash, Bertucelli said.

SMFD responded to Orcutt for a aircraft down at Dunlap School. One confirmed fatality. Engine 4, BC5, and DC101 assisted SB County FD. SMFD units currently being released. pic.twitter.com/BFWTzEo9cd

May 20 recap: Santa Maria news you may have missed today

A male motorcyclist was hospitalized Tuesday after colliding with a pickup truck at the corner of Skyway and Auto park drives near the Santa Maria Airport.

The tail and charred remains of an airplane lie on the playground at Dunlap Elementary School where it crashed Wednesday morning, killing the pilot.

Officials examine a parachute near where a plane crashed Wednesday morning at Dunlap Elementary School, killing the pilot.

A small plane crashed on the blacktop behind Ralph Dunlap Elementary School on Wednesday morning. Officials said the pilot died in the crash.