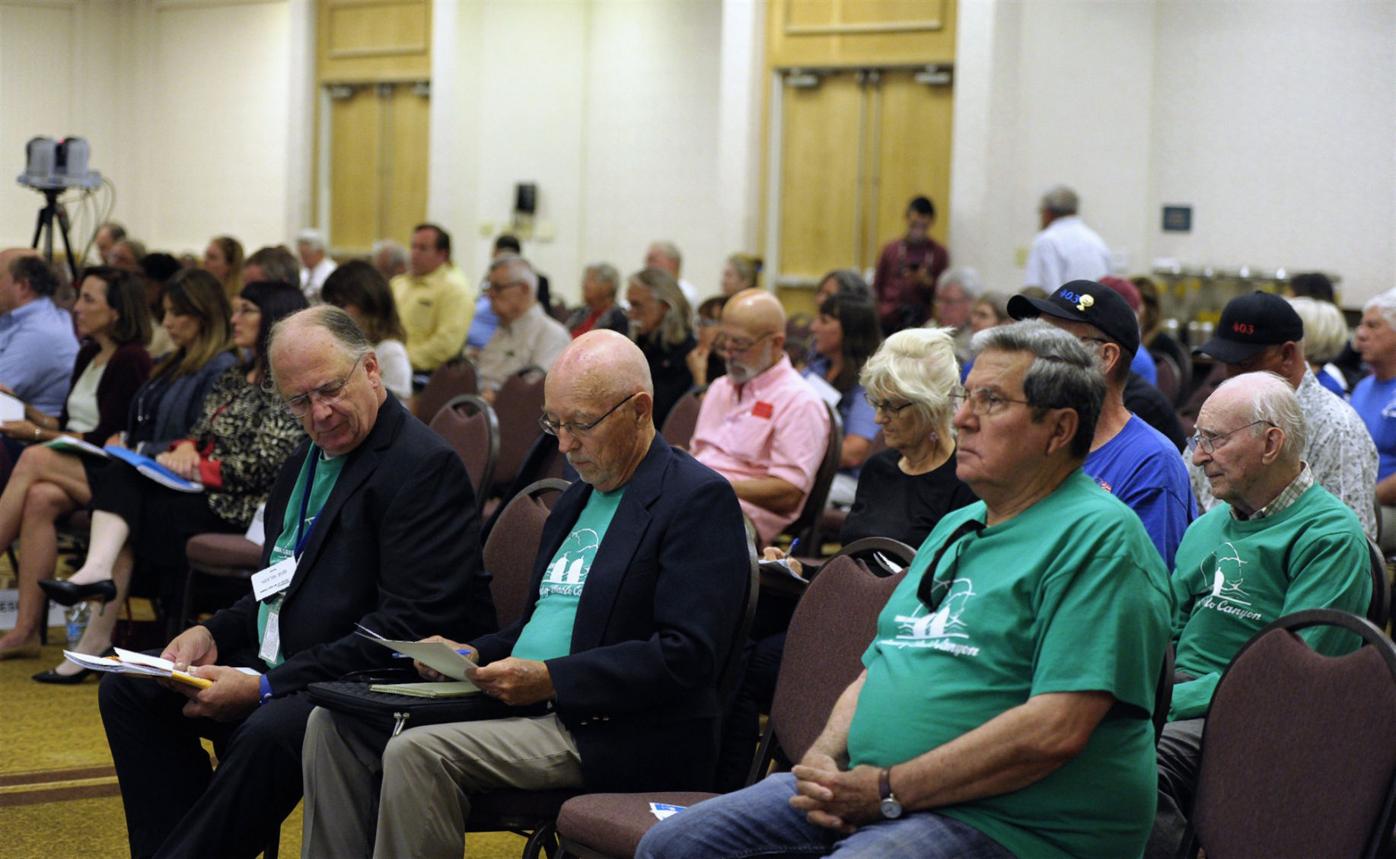 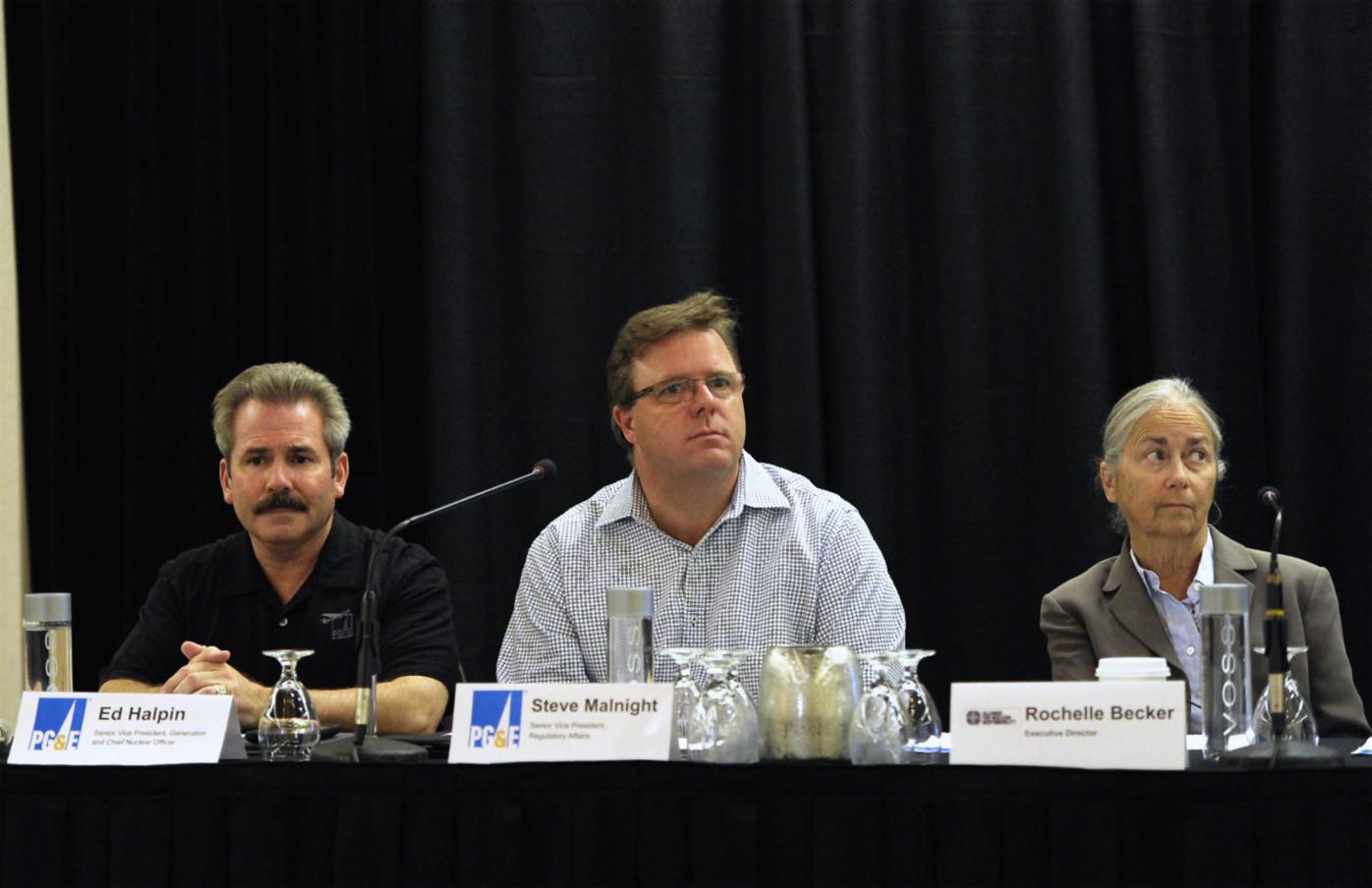 Ed Halpin, Steve Malnight and Rochelle Becker, from left, spoke Wednesday during a public meeting hosted by Pacific Gas and Electric Co. at Embassy Suites in San Luis Obispo. The meeting was held to solicit feedback on a joint proposal to close Diablo Canyon Power Plant by 2025.

Ed Halpin, Steve Malnight and Rochelle Becker, from left, spoke Wednesday during a public meeting hosted by Pacific Gas and Electric Co. at Embassy Suites in San Luis Obispo. The meeting was held to solicit feedback on a joint proposal to close Diablo Canyon Power Plant by 2025.

Despite the impending closure of Diablo Canyon Power Plant in less than 10 years that will cost San Luis Obispo County 1,500 jobs and millions of dollars in future lost tax revenue, Pacific Gas and Electric Co. officials emphasized during a community meeting Wednesday shuttering the twin-reactor nuclear facility was the most effective plan moving forward.

"I never imagined I'd be sitting here in front of you talking about phasing out nuclear ... but this is the best possible outcome for this plant and this community," Ed Halpin, PG&E vice president of nuclear operations told a room of about 50 people during the first of two identical meetings in San Luis Obispo hosted by the electric company.

PG&E announced last month it had reached an agreement with labor and environmental organizations to not pursue license renewal for the plant's two reactors, which expire in 2024 and 2025, respectively, and that it would close the plant under a joint agreement by 2025.

The news came as a shock to many in the community, where PG&E, which owns and operates Diablo Canyon, serves as the county's largest private employer and adds 10 percent to the county's annual budget.

However, under the joint agreement, the electric company will help employees at Diablo Canyon, as well as the community at large, transition through closure, and has committed $350 million to retrain plant employees for decommissioning and will also pay the county $50 million to offset declining property taxes.

Halpin said the agreements are good for both Diablo Canyon employees and the county, which will see the additional revenue being spent by those individuals and not take a hard hit to the housing market.

"(The agreement) takes care of my people ... and it focuses on taking care of the community," he said.

Officials have said, and stressed again Wednesday, that a major factor in deciding to close Diablo was California's changing energy landscape and a state policy requiring utilities to increase renewable energies to 50 percent by 2030. Growing wind and solar production also attributed to the decision.

"That baseload at Diablo won't really be needed past 2024, 2025," said Steve Malnight, PG&E senior vice president of regulatory relations. "Others have reached similar conclusions and that's really the foundation for how we chose to proceed."

As part of the agreement, PG&E will also pursue increased investment in energy efficiency, renewable power and electricity storage to offset energy no longer produced by Diablo Canyon.