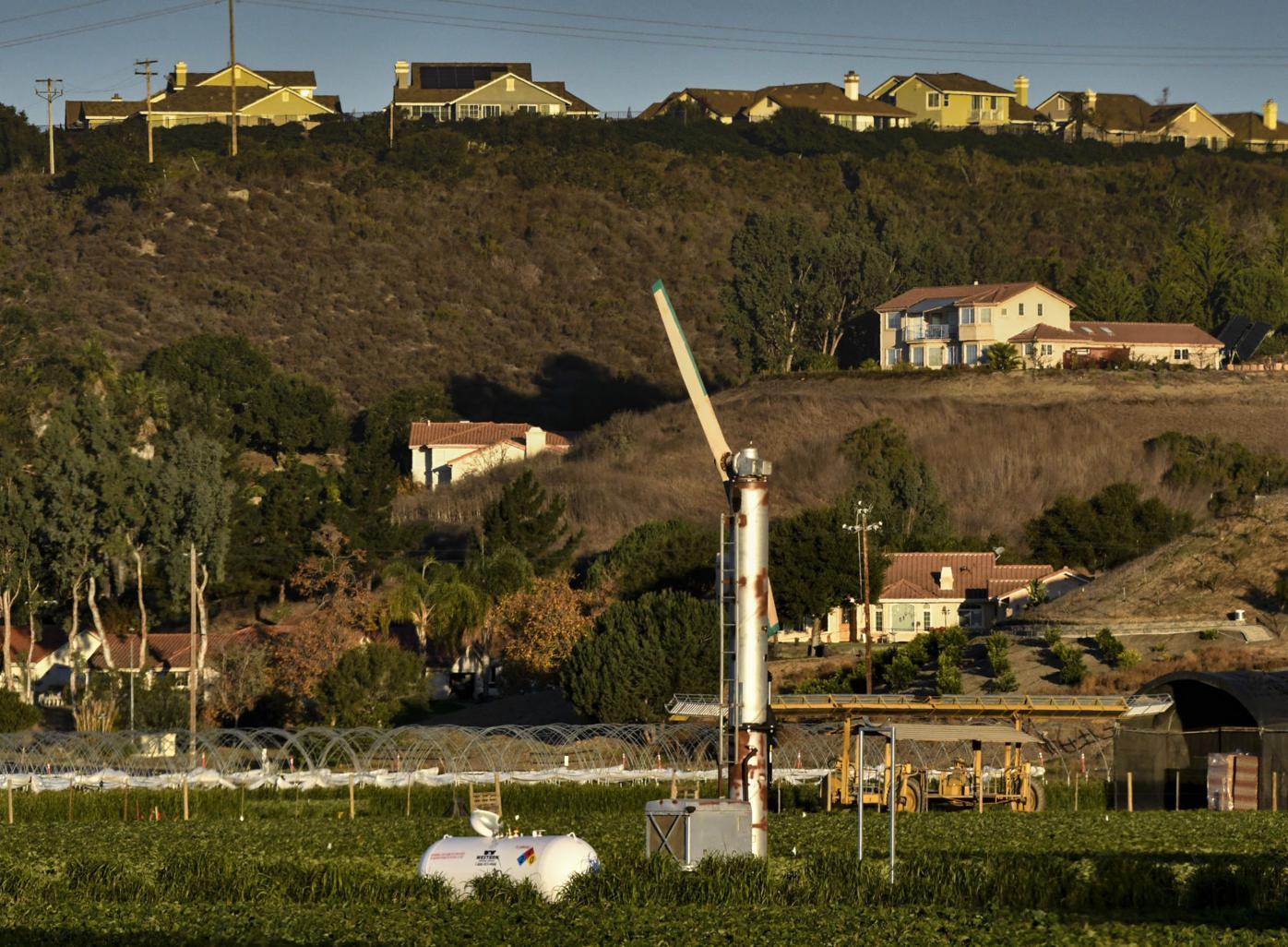 A wind machine used to keep frost from damaging strawberries being grown along Purisima Road in Lompoc stands near homes Sunday morning. Homeowners have petitioned Santa Barbara County supervisors to stop the noise from the machines they say keeps them awake all night. 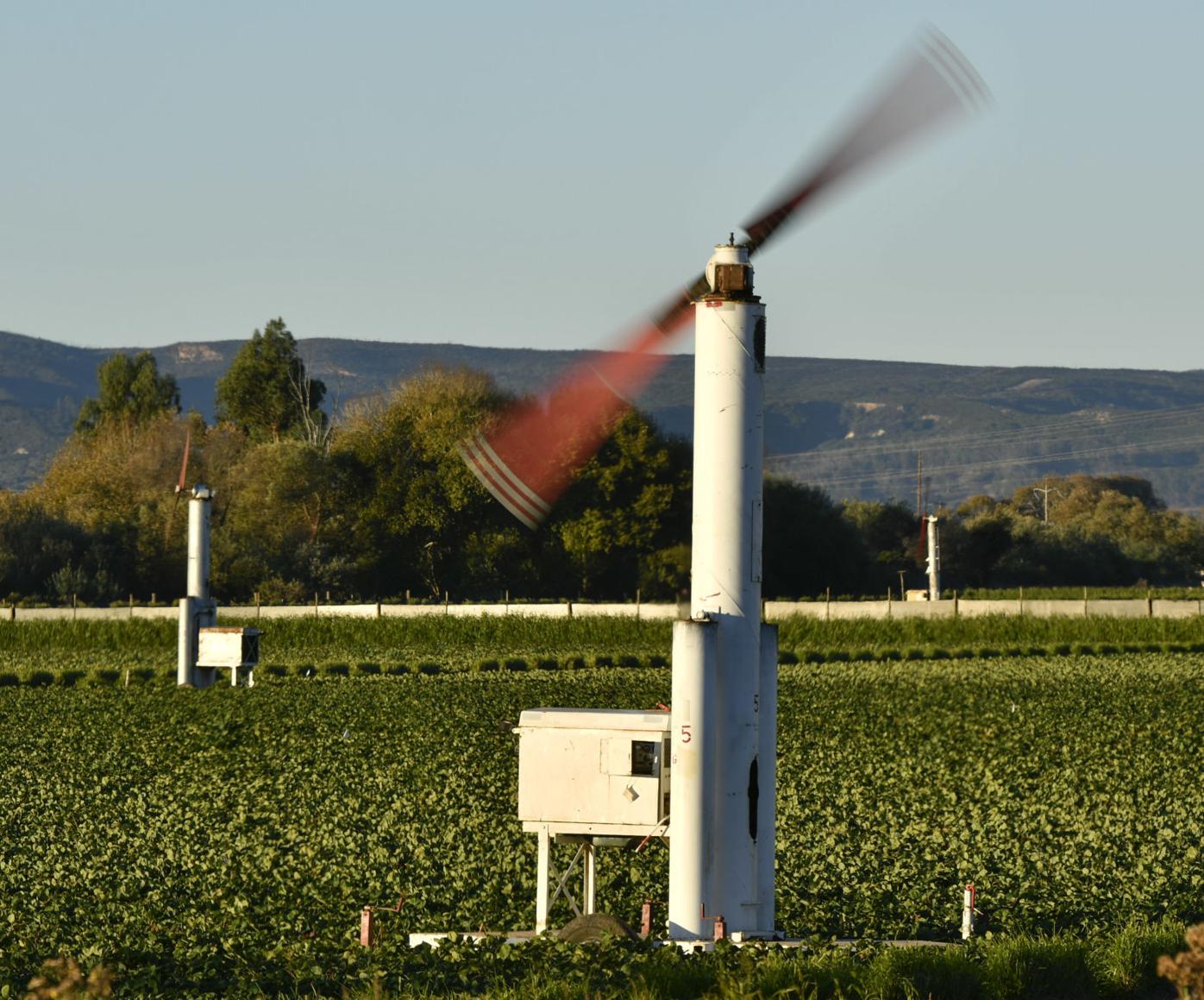 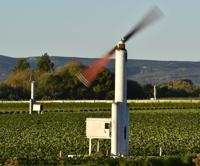 Propellers keep air circulating above strawberry fields off Purisima Road in Lompoc on Sunday morning. The wind machines are used to protect the crop from frost, but neighbors say the noise is keeping them awake all night. 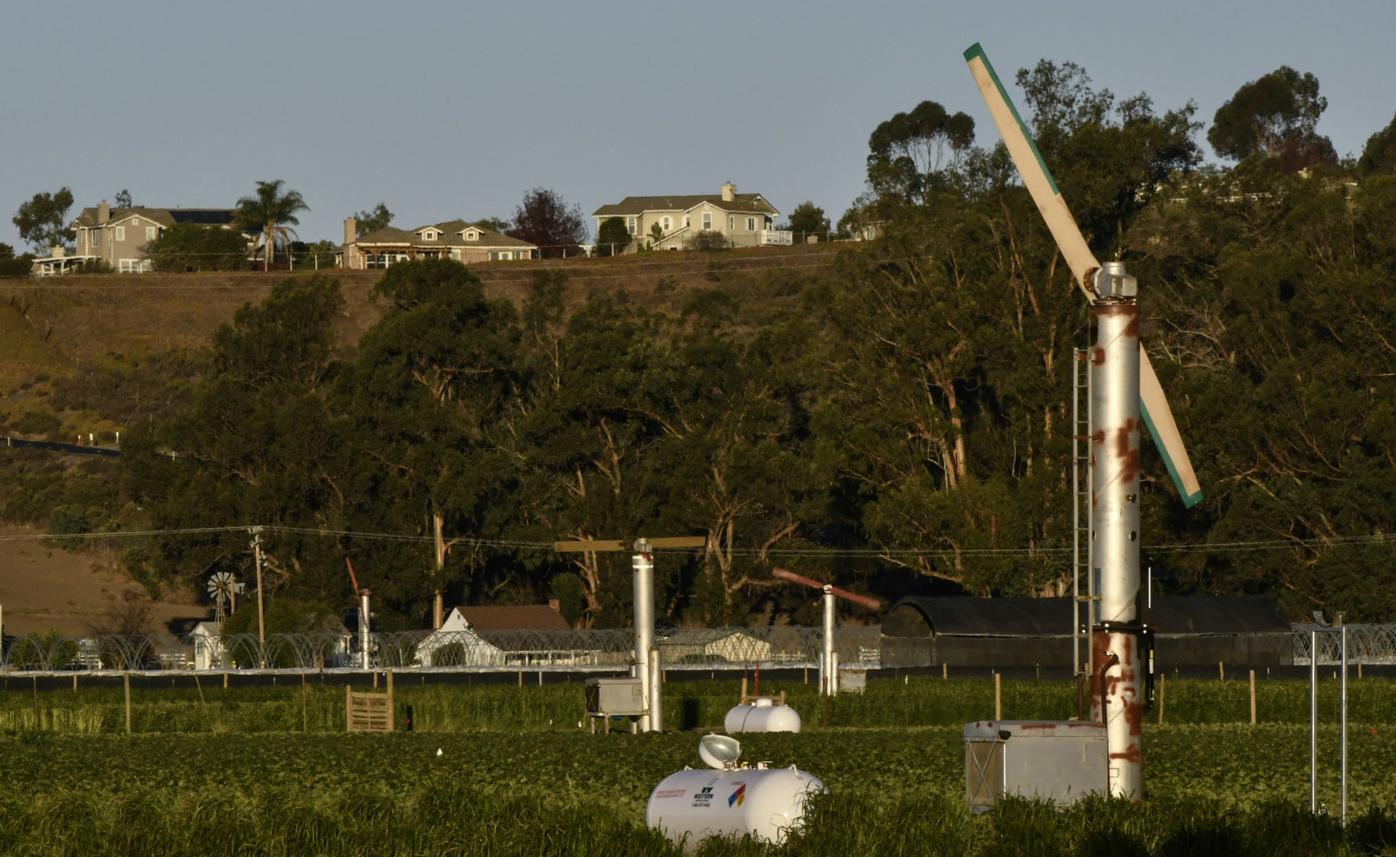 Wind machines used to prevent frost damage in strawberry fields along Purisima Road in Lompoc sit below nearby houses Sunday morning. Residents say the noise every night sounds like a fleet of helicopters hovering above their homes. 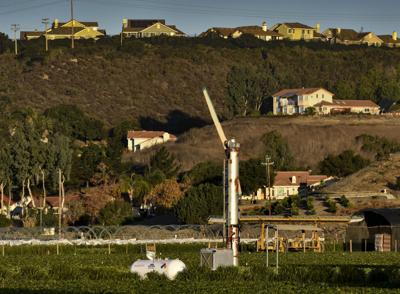 More than 100 residents of rural Lompoc have petitioned the Santa Barbara County Board of Supervisors to do something about the noise from an adjacent agricultural operation they say is keeping them up all night.

Timothy Brummer, who lives just off Purisima Road, started the online petition that garnered 110 signatures and was sent to the board via 3rd District Supervisor Joan Hartmann’s office Monday.

Brummer said a Camarillo-based corporation purchased farmland south of Purisima Road to grow strawberries and is using propane-powered engines to turn large propellers that circulate the air and prevent frost from damaging the crop.

He said the wind machines are started when the air temperature reaches 40 degrees, which is around 9 p.m., and run until 7 or 8 a.m., and the noise the whirling propellers produce is so loud it makes sleeping impossible.

He said they run almost every night, and are also used during the day following rains to dry out the crop.

“These wind machines are unhealthy and physically damaging to surrounding residents, to the point some have to evacuate their houses,” the petition says. “There are quiet alternatives to prevent frost damage, one being hoop houses, another is a quiet, turbofan type wind machine.

“We request Santa Barbara County Supervisors to do whatever is necessary to immediately stop noisy propeller type wind machines from being used … ,” the petition says.

Brummer said quieter wind machines are available, but using hoop houses instead would also restore peace to the neighborhood.

“It’s horrible,” he said this week. “I can’t even sleep at home. I have to go down to my office to sleep. … This is the second year they’ve been doing this. We went ’round and ’round with them last year.”

Brummer said last year, the company president promised to remove about 20 wind machines from the fields and put up hoop houses to protect the strawberries.

Santa Barbara County’s crop value up 5% in 2019, according to annual report

The value of agricultural crops produced in Santa Barbara County in 2019 rose 5.1% over the previous year, exceeding $1.6 billion, according to the annual Agricultural Crop Report released Monday.

Instead, he said, the company only put up a few hoop houses, took out two machines and then added even more. He said he counted 38 machines this week.

“It’s like helicopters hovering over your house all night long,” he said, adding the company president hasn’t even been willing to talk to the neighbors this year. “When we call him, he just tells us to go talk to his lawyer.”

Brummer said the company growing the strawberries is Camarillo-based Rincon Fresh, but the phone number listed on the company’s website now goes to Mission Oaks Management Corp., where a receptionist said Rincon Fresh “is no longer operating.”

But she took a message about the wind machines and said a supervisor would call back right away; however, a call had not been received by the end of the business day Friday.

The county's Noise Ordinance sets a limit of 65 decibels, but it refers primarily to noise from transportation and construction activities and doesn’t mention agriculture.

Brummer has a video of himself measuring the sound at Purisima and Le Valley roads with a decibel meter that registers above 87 decibels, and he said the sound is 65 decibels inside the nearby houses.

“That’s well over the 45 decibels the CDC recommends for sleeping,” he said.

But it appears the Noise Ordinance is trumped by another county ordinance.

"It's essentially protected under the Right to Farm Ordinance," said Jefferson Litten, chief of staff for Hartmann, adding the growers can essentially do what they want with their farm. "The county really has limited authority."

Joan Niesen, who lives right across the street from the fields, said the wind machines have been “a two-year nightmare” that have made it impossible for her to sleep.

“It’s every night,” she said. “And I’ve got animals. I have two horses that have to sit outside and hear that all night long. … I have neighbors in their 90s — two sisters 98 and 96 years old — and they have no recourse.”

Niesen said she registered another complaint Wednesday morning with the County Sheriff’s Office and was told by a deputy he’d already received five complaints that day.

“I called the agriculture commissioner and she gave me some song about [strawberries] being the biggest cash crop,” she added. “We’re trying to get a group together to take some legal action. … I just want my peace back. We deserve our peace.”

Santa Barbara County Board of Supervisors voted unanimously Dec. 8 to send a letter to the governor asking for the Tri-Counties area to be sep…