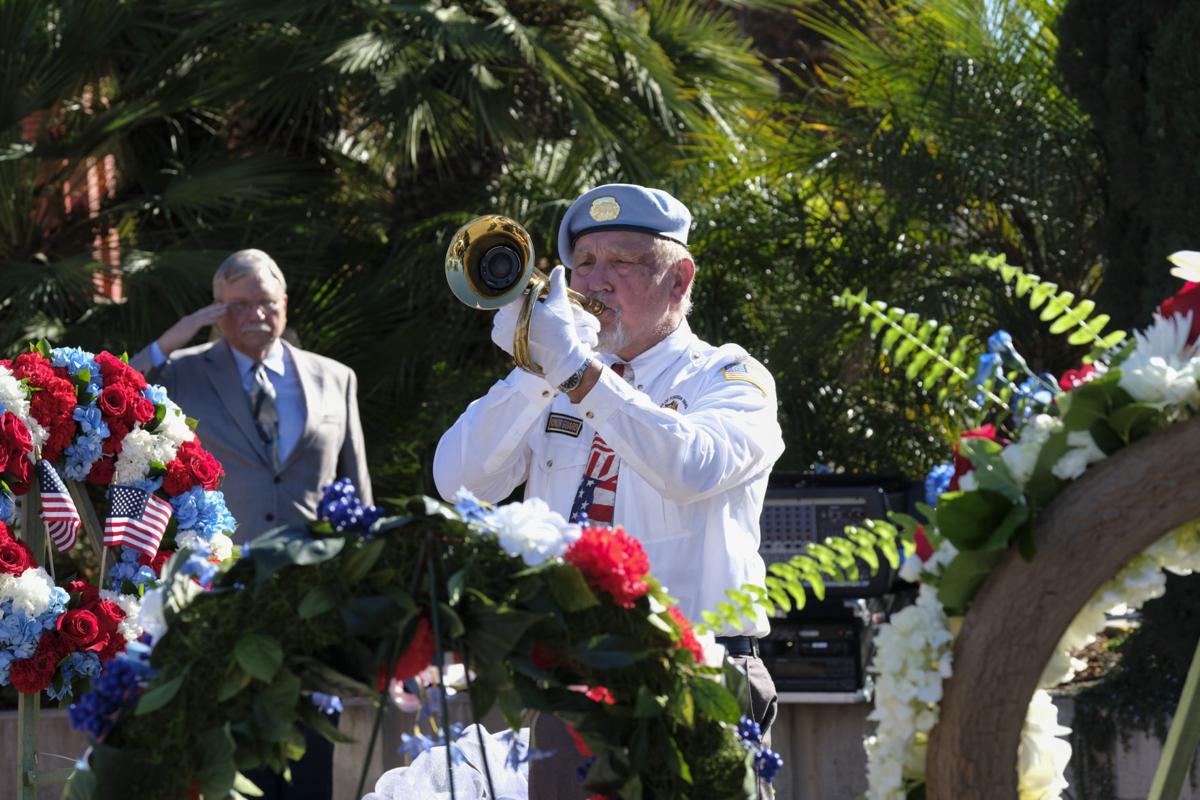 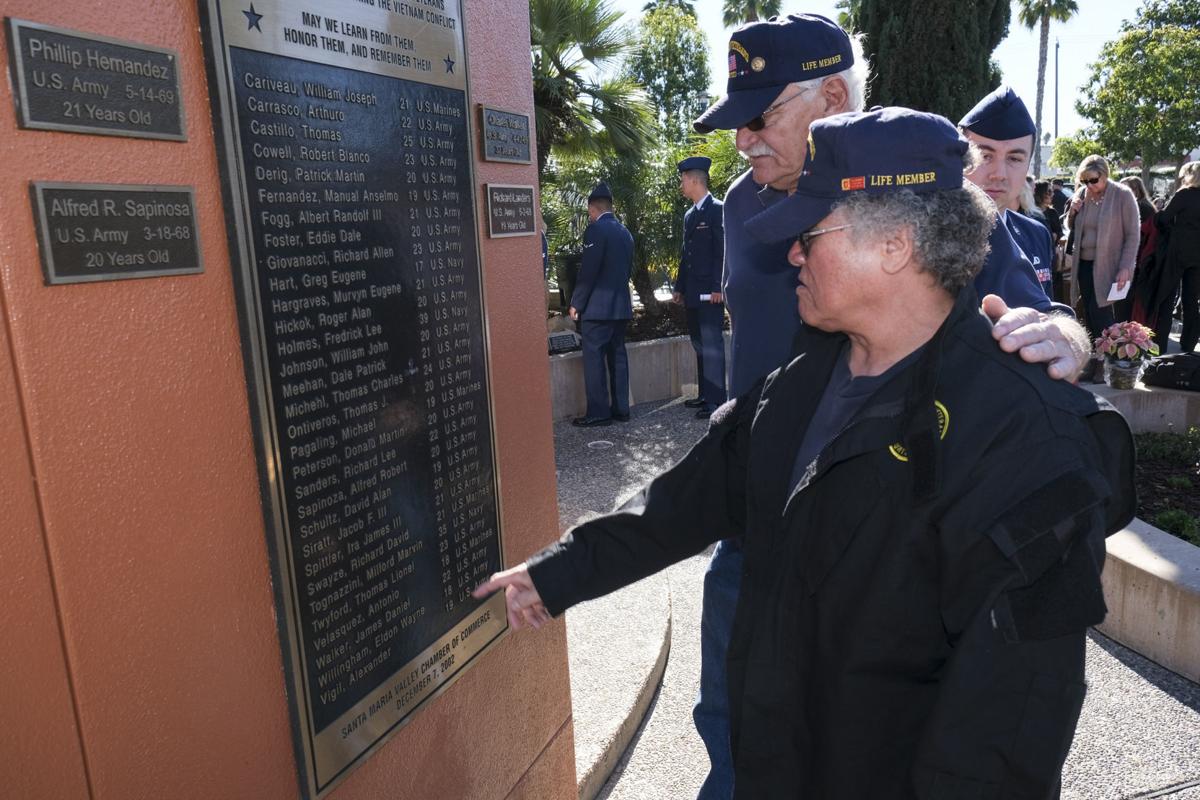 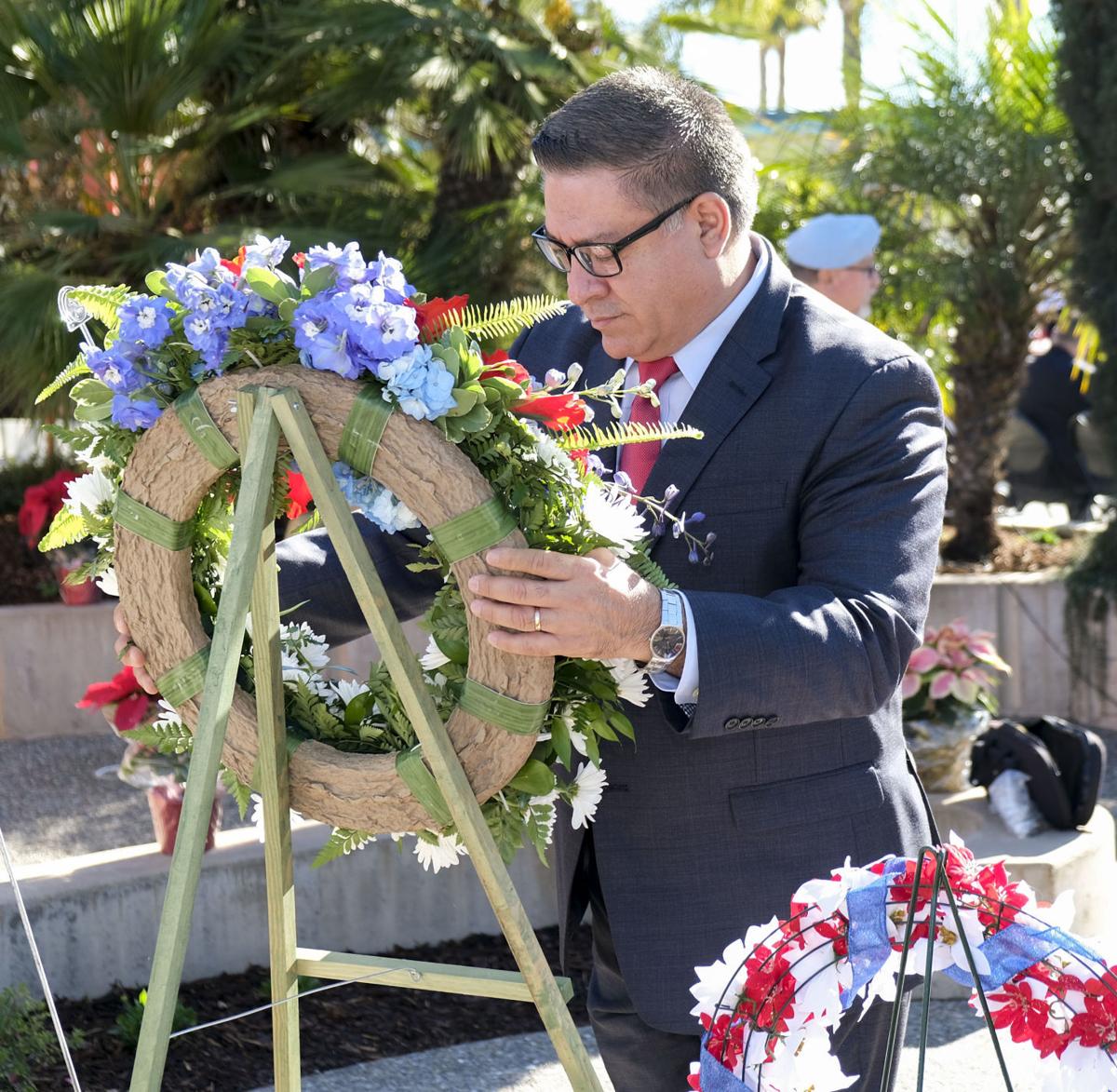 Rep. Salud Carbajal, joined others in placing a wreath during the Freedom Monument Veterans Memorial ceremony on Friday. 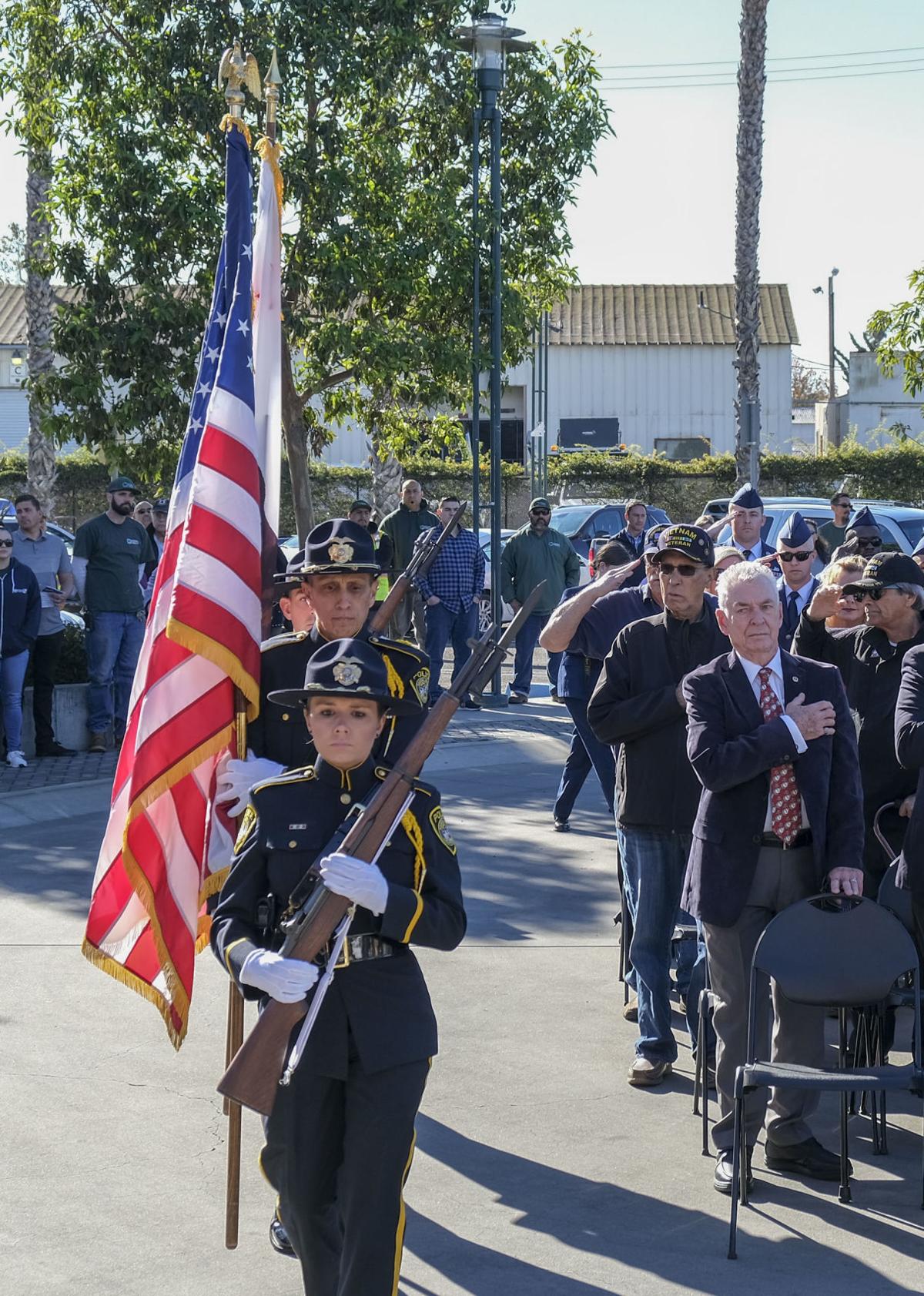 The crowd shows respect to the flag as members of the Santa Maria Police Department Honor Guard post the colors during the Freedom Monument Veterans Memorial ceremony on Friday. 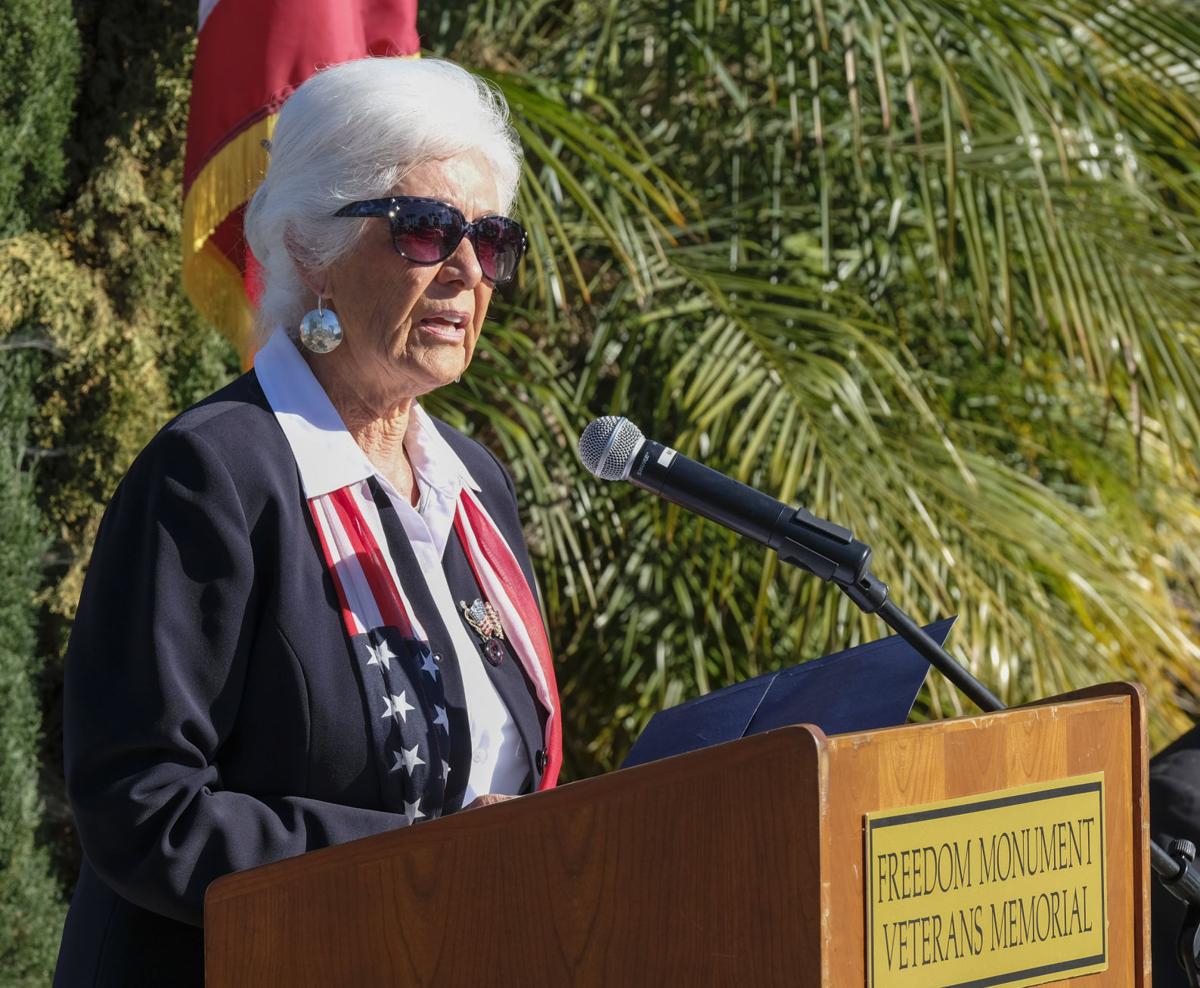 With the playing of taps and the laying of wreaths, Santa Marians who gave their lives in service of the United States were honored Friday during the 17th annual Freedom Monument Veterans Memorial event.

The ceremony, commemorated annually on Pearl Harbor Day, was held outside the Abel Maldonado Community Youth Center where the city of Santa Maria constructed a monument to honor veterans from the area who gave the ultimate sacrifice. The monument, which was built in 2001, currently has the names of 113 soldiers who gave their lives in conflicts ranging from World War I to the War on Terror.

On Friday, around 90 people gathered to witness a wreath-laying ceremony, the Santa Maria Valley Veteran Honor Guard and speeches from city and county officials.

“It’s such a privilege to me, as a daughter of a veteran of the Second World War and Korean War, to be here,” said Santa Maria Mayor Alice Patino. “There are 113 names on our Freedom Monument Veterans Memorial, and I’d like to take a moment to recognize all of you veterans here. We gather here at the memorial as an annual tradition to remember the sacrifices made by many of our men and women from the Santa Maria Valley who left to serve the military. Seeing the stars and stripes today as we pledge allegiance makes me very proud. It’s very sad when we see people in our country — Americans — burning our flag that means so much to all of us.”

Patino said it was incumbent on all Americans to honor the service of the country’s veterans. “President John F. Kennedy said, ‘A nation reveals itself not only by the men it produces but also by the men it honors, the men it remembers,’” Patino said. “Throughout our nation’s history, America has been blessed with soldiers who were ready to risk all to defend our way of life. Our nation owes a great debt to its veterans, whose service in the country spans every decade, every year, every day of America’s residents.”

Fifth District Supervisor Steve Lavagnino spoke about the immense sacrifice made by the men and women honored at the monument. In his remarks, Lavagnino highlighted the story of one of the names on the memorial, Jacob Siratt of Santa Maria.

“On July 18, 1968, [Siratt] was riding in the lead truck of a convoy traveling north in response to the Tet Offensive,” he said. “There were orders not to stop for anything. They came upon a young Vietnamese woman standing in the middle of the road. When she wouldn’t move, the driver pulled off to the shoulder to pass, setting off an explosive device that had been planted there. [Siratt] was four days past his 20th birthday. Lost his life that day but today rests in peace at the Santa Maria Cemetery.”

Robert Hatch, the chairman of the Chamber of Commerce’s military affairs committee, spoke about the work that led to building the monument. “This Freedom Monument Veterans Memorial was built on a concept that no person who died while in the service for their country should ever be forgotten — it seems relatively obvious but we determined that was probably not the case in Santa Maria. Sept. 11 once again shattered the idea that America could live in isolation from the plots of an aggressive enemy. I’m of the belief that the Freedom Monument galvanized an already-proud community.”

Michael Stadnick, commander of the Santa Maria Valley Veteran Honor Guard, said he was pleased to see the community gather to support the area’s service members. “To me, this is more than just a day,” Stadnick said. “It’s a special day. I’m glad to see veterans, families of veterans and the community come out and help us celebrate the lives and the legacy of our veterans.”

HE WAS THERE: Navy vet recalls attack on Pearl Harbor, see Page A6.

With the playing of "Taps" and the laying of wreaths, Santa Marians who gave their lives in service of the United States were honored Friday d…

Citing the disruption illegal fireworks cause in the lives of Santa Maria residents, alongside the impact on noise-sensitive pets, community m…

With hopes of making downtown Santa Maria streets more accommodating to pedestrians and bicyclists, the Planning Commission on Wednesday appro…

Rep. Salud Carbajal, joined others in placing a wreath during the Freedom Monument Veterans Memorial ceremony on Friday.

The crowd shows respect to the flag as members of the Santa Maria Police Department Honor Guard post the colors during the Freedom Monument Veterans Memorial ceremony on Friday.