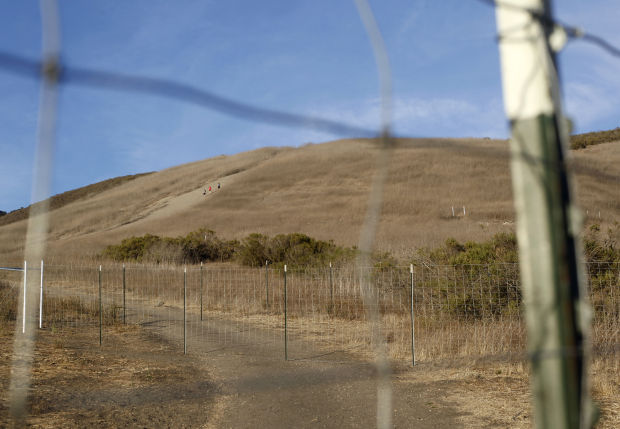 Hikers walk along a fence put up by property owner Rob McCarthy to prevent the public from hiking the Ontario Ridge trail between Shell Beach and Avila Beach. 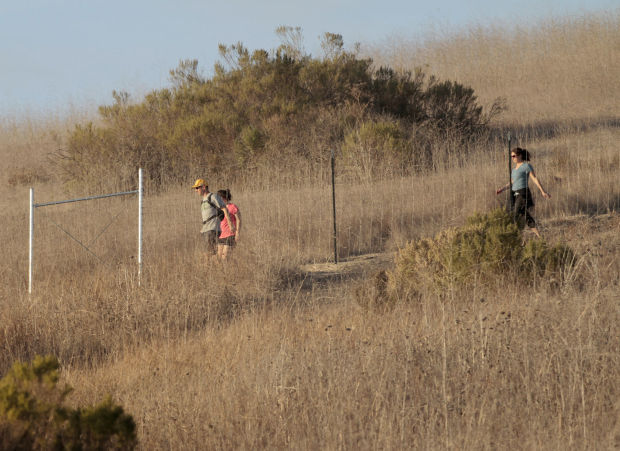 McCarthy to install the fencing blocking a portion of the

Individuals who trek across a popular hiking trail on Ontario Ridge between Avila Beach and Shell Beach are finding it harder to make the hike after an area landowner recently erected a locked gate, no trespassing signs and a fence wrapped in barbed wire along a portion of the path.

The looping trail, also known as the Shell Beach Ridge, Avila Beach Ridge and Upper Bluff trails, runs through county-owned parks land as well as private property, and has been used by the public to access the Pirates Cove area, bluffs and beach below the ridge.

“I have hiked up there for years,” said Shell Beach resident Tarren Collins, who has launched a public effort to save the trail. “It’s a prescriptive easement.”

Prescriptive rights and prescriptive easements establish public use of private property based on continual use of the land for at least five years.

Rob McCarthy, who owns 37 acres of undeveloped property east of Cave Landing Road and has plans to build his retirement home on the land, hired a fence company to install a wire fence that zig zags along the trail on his property.

He also erected a large gate and has posted numerous no trespassing signs on the fence and adjoining gate, both of which have been wrapped in barbed wire. The only portion of the trail currently open is the small part that runs through the county’s property.

McCarthy put up the fencing, he said, not to keep people from traversing his property but rather because he’s concerned about the hikers’ safety.

“Someone’s going to get hurt. There’s no question about it,” McCarthy said, adding he’s not against part of the trail running through his property but it has to be rerouted.

If someone was to get injured on the trail, the incident would weigh heavy on his conscience because he did nothing to prevent potential accidents on the steep slope, McCarthy said.

“It’s not the legal liability that I am worried about,” he added “It’s the moral issue. I’m not this evil get-off-my-land-you-ruffian (guy). We know it’s dangerous.”

The county Planning and Building Department, which has coastal permitting authority, allowed McCarthy to install the fencing blocking a portion of the trail without requiring permits or a public hearing.

County Parks Director Curtis Black said county officials don’t believe the fencing or signage needs parks permits and that McCarthy was within his legal rights to block access to portions of the trail.

Collins and others who have used the trail for years challenged the county’s action, triggering a dispute resolution process between the county and Coastal Commission.

Coastal Commission Executive Director Dan Carl said he made the determination Monday, Jan. 27, that installing the fencing along the trail does require coastal permits.

“I told (the county) we don’t agree that no permits are required,” Carl said.

By week’s end, no agreement was reached with the county, so the dispute resolution was added to the commission’s agenda. A public hearing will be held at 8:30 a.m. during the Coastal Commission’s Feb. 13 meeting in Pismo Beach at the Cliffs Resort, 2757 Shell Beach Road.

Commissioners will discuss the issue, take public comment and decide whether permits are necessary, Carl said.

“The commission could tell the county to enforce the local coastal plan,” he added. “It’s unclear how this is going to go down.”

“My feeling is our hands are tied,” Hill said, adding it’s his belief the trail has been historically used by the public. “The Coastal Commission is the superior agency, with the Attorney General on their side. A trail is a trail, and coastal access is protected by the Coastal Act.”

The Coastal Commission gets a couple calls a year about areas historically used by the public to access the coast that the private property owners have blocked. Commission staff has been investigating whether a prescriptive easement exists on McCarthy’s property as well as the surrounding lands for the past year.

“It’s so obvious,” Collins said. “This is the poster child (for prescriptive rights).”

She recently launched an effort through Facebook — Save Ontario Ridge Trail — to get people who use the trail to show up at the commission’s meeting in Pismo and post photos of individuals using the path on the page.

The Facebook page allows visitors to link to the Coastal Commission’s website, where individuals can download a “declaration of use,” which allows members of the public to document their uses of the trail and submit the information to the agency.

Fencing on Ontario Ridge trail must come down

Hikers walk along a fence put up by property owner Rob McCarthy to prevent the public from hiking the Ontario Ridge trail between Shell Beach and Avila Beach.

McCarthy to install the fencing blocking a portion of the