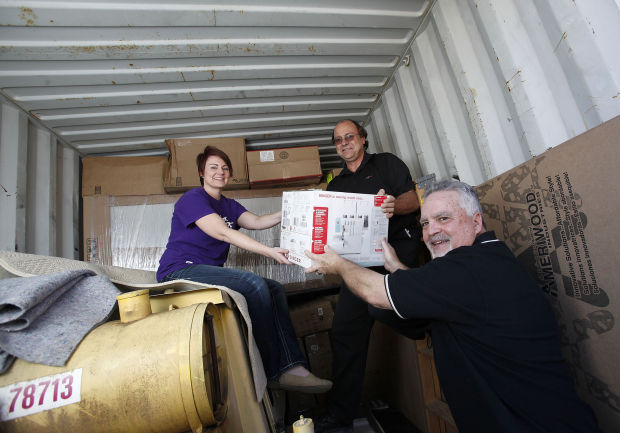 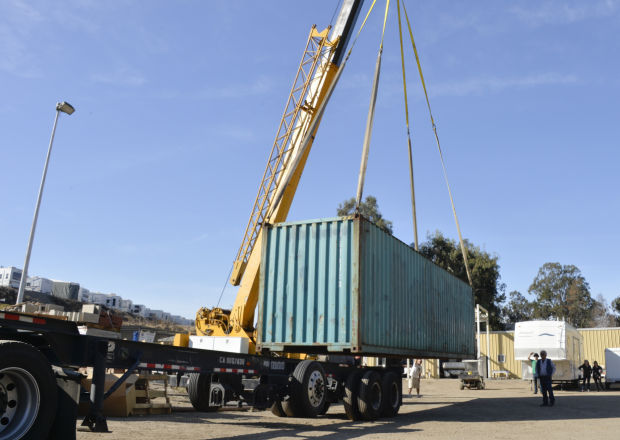 A 40-ton crane lifts a cargo container filled with donated goods bound for a village school in Africa at Simons Construction Co. in Nipomo. 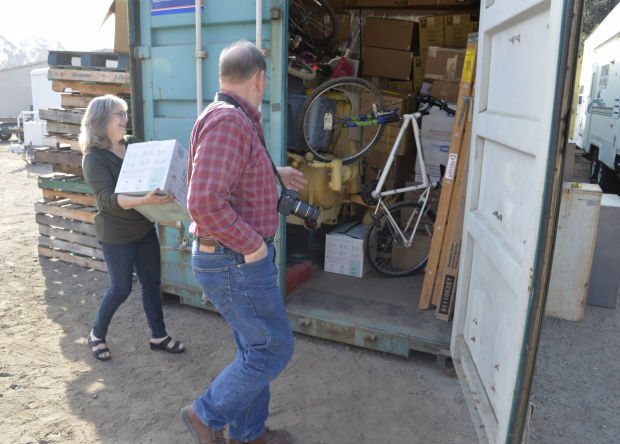 Seeds of Hope Administrator Christi Williams carries a box of goods donated by local Rotary clubs for use by a village school in Africa. The cargo container was loaded onto a truck in Nipomo on Jan. 27 to travel to a freighter in Los Angeles Harbor. Dan Balfe, of the Cambria Rotary, helps.

A 40-ton crane lifts a cargo container filled with donated goods bound for a village school in Africa at Simons Construction Co. in Nipomo.

Seeds of Hope Administrator Christi Williams carries a box of goods donated by local Rotary clubs for use by a village school in Africa. The cargo container was loaded onto a truck in Nipomo on Jan. 27 to travel to a freighter in Los Angeles Harbor. Dan Balfe, of the Cambria Rotary, helps.

A steel cargo container left Nipomo last week to start a three-month journey to a village in one of the poorest areas of Zambia, Africa.

Some of the 275 items stuffed inside the 40-foot container include $20,000 worth of professional woodworking equipment — table saws, planers and sanders.

Also packed into its 2,963 cubic feet of space are 20 new and refurbished sewing machines, $7,000 worth of agricultural tools, 23 stools for a water analysis laboratory and half a dozen bicycles.

Personal computers and peripherals, desks, fully stocked toolboxes, energy-efficient wood stoves, water filters and treadle pumps are among the other goods filling the box from floor to ceiling.

The largest items are a trailer-mounted air compressor and a surplus four-wheel-drive flatbed Austrian army truck that will eventually be fitted with a portable well-drilling rig.

It required a 40-ton crane to lift the 40,000-pound container from its resting place at R. Simons Construction yard and load it onto a big-rig’s flatbed trailer.

When the container finally arrives in Africa, the items inside will be used to set up a vocational school that will teach the villagers sewing, farming, water quality analysis, pump repair and computer and business skills.

After they graduate, the school will provide the students with the tools and equipment they need to practice their trades as a loan.

When the students repay the loan, the school will use the money to buy more tools.

“It’s amazing,” said Bill Pucciarelli, a member of the Nipomo Rotary Club that spearheaded the effort to gather the goods to start the school.

“Here we are on the Central Coast establishing a vocational school halfway around the world in one of the most poverty-stricken areas in the country,” he said.

“Most of us will never see the fruits of our labor,” he added, referring to the many people who donated money and equipment, provided discounts on goods and services, or collected and packed the items. “But some of those people over there are seeing clean water for the first time in their lives.”

Several years ago, Nipomo Rotary joined forces with the Santa Maria South Rotary Club, the Rotary International Foundation and Rotary clubs in Zambia to raise the money needed to drill a water well.

The project was so successful, the next year the Nipomo club formed a coalition with three Santa Maria Rotary clubs to drill three more wells.

No longer would the villagers’ children have to walk to a distant river twice a day to haul back buckets of dirty water.

Pucciarelli said the funds were channeled through the nonprofit Seeds of Hope International Partnerships, headquartered in San Luis Obispo with offices in Zambia.

But when the Rotarians approached Schauer two years later to see what else they could provide, the answer was a vocational school.

“Basically, they needed two things,” Pucciarelli said. “They had an army surplus truck for a portable drilling rig, but they had no way to get it over. Plus they had a list of supplies they needed for the school.

“I could not generate enough money by myself, so we went into partnership with the Rotary Club of San Luis Obispo de Tolosa and the Cambria and Cambria Sunrise Rotary clubs,” he said. “We came up with enough to buy everything and ship it over.”

The clubs got a lot of help in their effort.

A girls volleyball team and the student Rotaract Club in Cambria raised money. Many individuals donated their old computers and bicycles.

Mid-State Containers in Nipomo discounted the container and waived some fees. Louie’s Crane Services in Oceano discounted its fee.

Richard Simons allowed the club to store the container in his equipment yard during the two months it took to fill it.

Santa Maria Sewing Superstore boosted the 12 or so machines Pucciarelli expected to buy with $2,000 to a total of 20.

“He even included the sales tax,” Pucciarelli said of Michael Hudachek, who owns Santa Maria Sewing.

Hudachek said he provided 10 new Baby Lock machines at a 60-percent discount, donated 10 reconditioned Singer machines and threw in needles and other accessories.

“I said, ‘Listen, as long as I can keep sewing going, it’s going to come back to me,’” Hudachek recalled telling Pucciarelli. “Of course, no one from Africa is going to come in and buy another machine.

“But I think it’s a great service they’re doing, and we’re just glad to help,” he added.