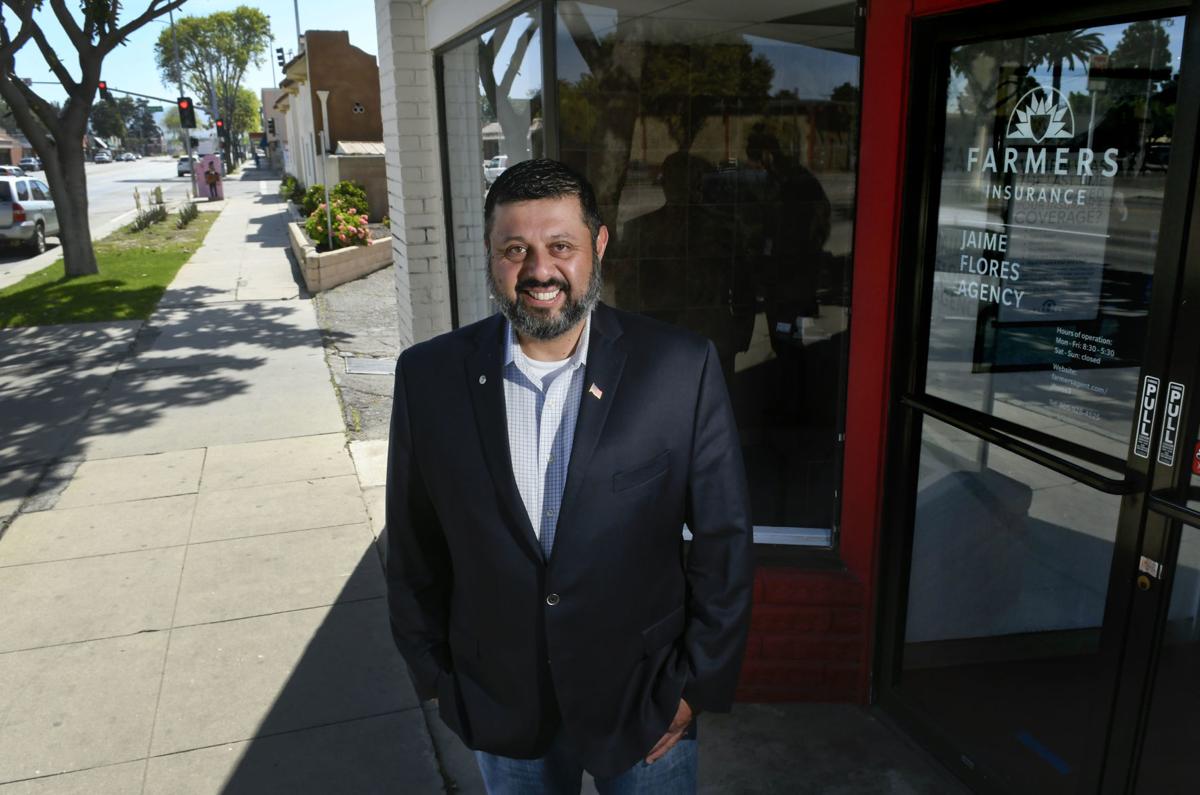 Jaime Flores, agent/owner of the Farmers Insurance office at 310 W. Main St. in Santa Maria, works in his office Wednesday. He is helping his fellow business owners navigate the application processes for a variety of COVID-related economic stimulus/loan/grant programs. 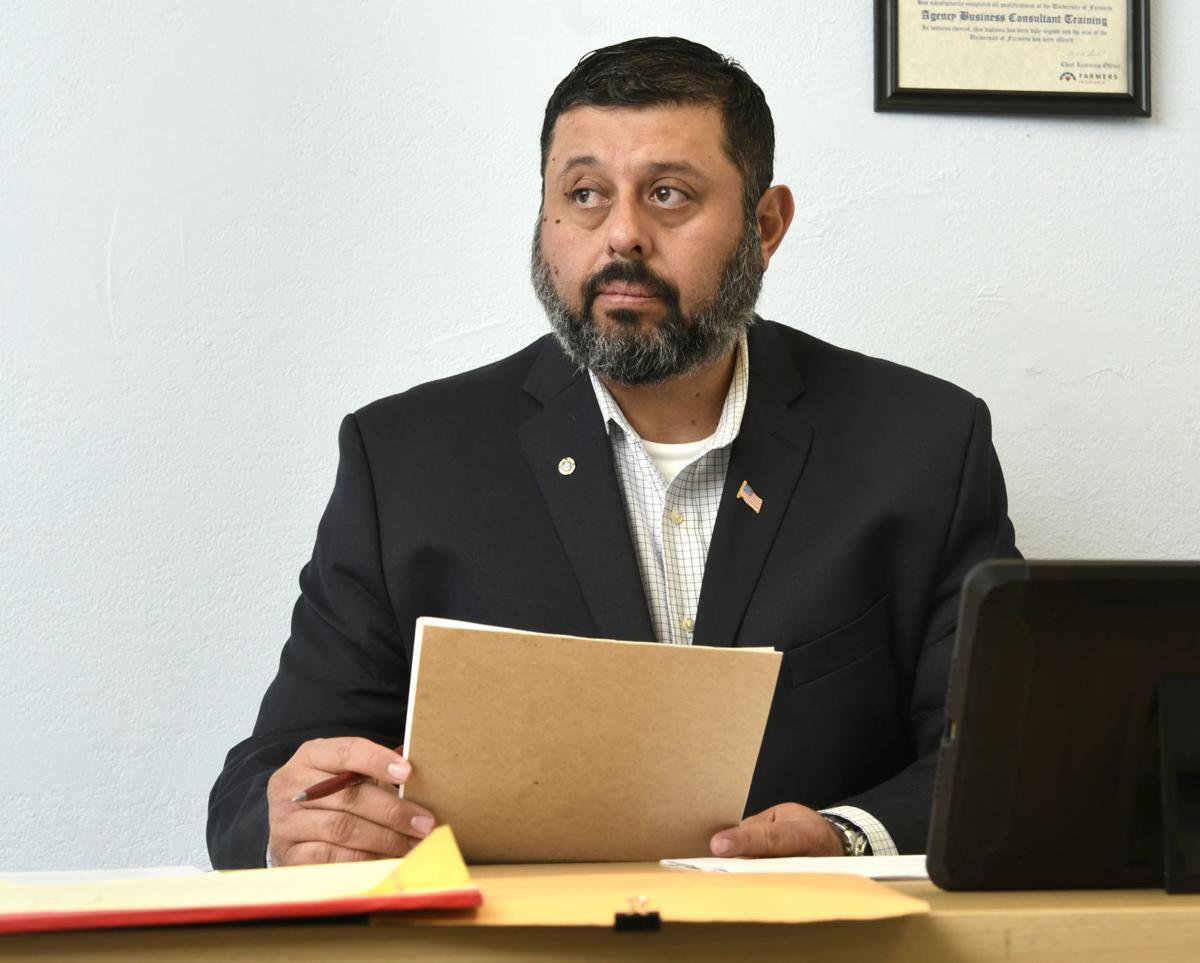 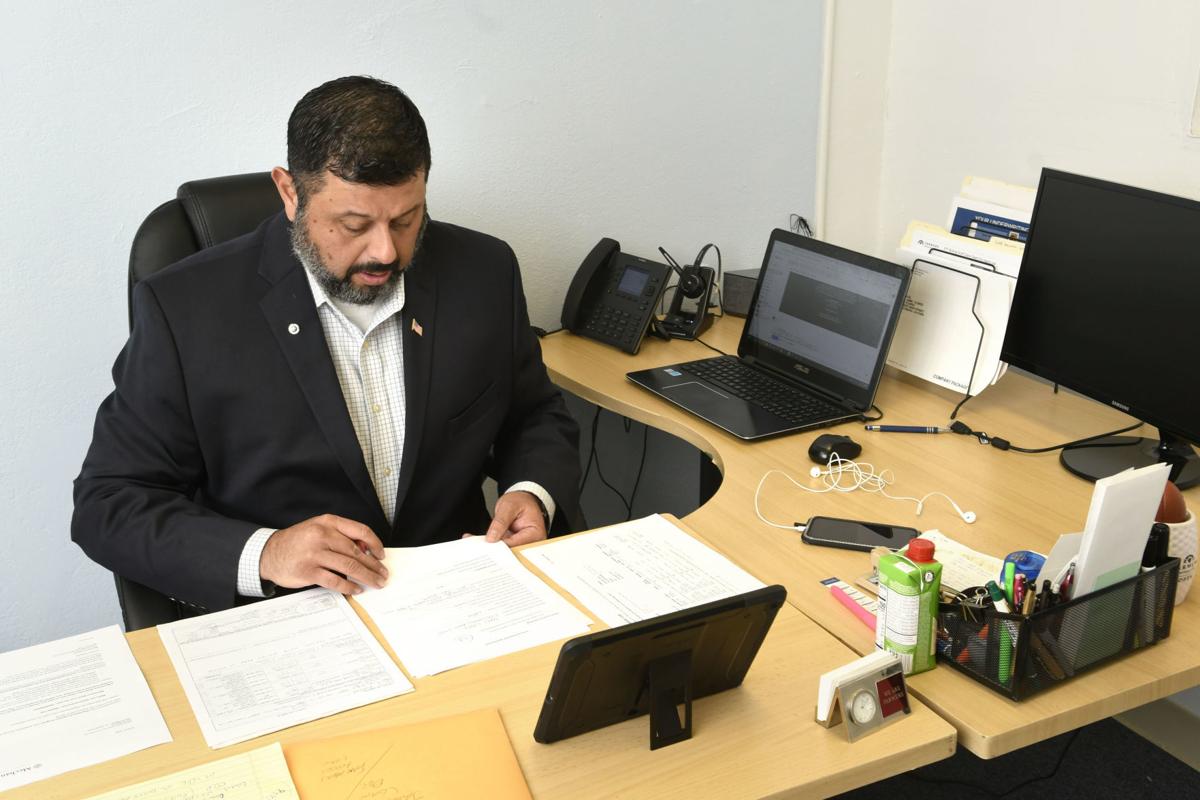 Amid the sweeping closures and dwindling income brought on by COVID-19, business owners face a maze of additional paperwork as they wade through the shifting sands of related economic stimulus, loan and grant programs.

Santa Maria businessman Jaime Flores has navigated the course and now he’s opening his doors to help others finding their way.

Business owners who could benefit from the free, bilingual assistance from Flores and a fistful of additional volunteers are welcome to swing into his Farmers Insurance office for a sit down to discuss business assistance programs and work through applications and requirements.

Since starting the volunteer effort, Flores said he has worked with corporations, sole proprietors, restaurants, food trucks, barbershops, salons and others.

“We’re standing up to help people and to make sure the resources are available to everyone, whether you’re a big business, small business or in-between guy,” Flores said.

“If we can help 100 people, 10 people, then I know we’ve done a great thing. Everybody’s working together,” Flores said.

Flores takes great pride in his hometown, where in addition to serving as a Farmers Insurance agent he owns Central City Events. His goal in rendering free aid to the business community: getting the community back on track as soon as possible.

“I’m hoping we see light at the end of the tunnel and they let us get back to business as soon as possible because the economic impact of one in four businesses not returning is devastating to think about. The long-term impact is incredible: not to have funds for city services, for law enforcement, there are concerns we really have to take into consideration,” Flores said.

Flores managed his way through the system with guidance from Santa Maria Chamber of Commerce Economic Development Commission Director Suzanne Singh and the Small Business Development Collaborative through Solvang Chamber of Commerce. The SBDC is the Small Business Administration’s largest service program. It provides no-cost and low-cost business and economic development assistance to small businesses and entrepreneurs.

Flores filed for SBA disaster relief on March 23, but has had no communication back from that program.

In an effort to aid those fighting coronavirus, Camarillo resident and COVID-19 survivor Dwight Everett chose to donate his plasma, which cont…

“There have been big changes in their online program where we could no longer access it by website, so we have to call in or mail in. I don’t know if my application is lost in the queue or was set aside because I applied under an earlier version of the program,” Flores said.

Meanwhile, he applied for an SBA Payroll Protection Program loan April 3 and received his approval April 14. Those funds were slated to be available a week later.

“I’ve found there have been so many variances in communications regarding what’s required, which program complies with what, so many things change,” Flores said.

When he dropped off his initial paperwork at the bank, he noted many of his fellow applicants didn't have the proper documentation on hand.

“There’s a lot to it — rental agreements, entity documents, utility bills, interest on mortgage — and lots of boxes to check,” Flores said.

There’s also a lot of confusion not only on the part of businesses, but on the banks and services lending aid. Flores said he was initially told the Payroll Protection Program could only be used for wages, rent, utilities, and interest on mortgage. Funders told him, however, that the money could only be used for payroll.

Santa Barbara County’s Hispanic population has been hit harder by COVID-19 than other ethnic and racial groups, and about 30% of all the confirmed cases in the county are at the Lompoc Federal Correctional Complex, according to an update on the disease delivered to the Board of Supervisors on Tuesday.

“The communication process is just unclear. Everyone’s talking payroll, payroll, payroll, but it says right there on the final documents that the funds can also be used for all these other needs with a percentage of forgiveness dropped for anything not used on payroll,” Flores said.

Programs are announced but quickly run out of funds or crash due to lack of infrastructure.

“The U.S. Chamber grants program that launched at noon (Monday) crashed immediately. It was under repair most of the day. I kept checking back but it never reopened. Ultimately the page was updated to read the program was closed and no longer accepting applications,” Flores said.

Such has been his experience throughout recent weeks.

“It’s a constant follow-up and management process. You’ve got business owners trying to run their businesses through all this at the same time going to websites that don’t even provide access,” Flores said.

Jaime Flores and his volunteer crew are available via phone, internet or, by appointment at the Farmers Insurance office, 310 W. Main St., Santa Maria. Call (805) 928-4525 or e-mail jaime@jfloservices.com

Hancock College will host a series of virtual workshops for local high school seniors and their parents and guardians to help students obtain their first year at the college free of tuition and fees through the Hancock Promise.

“It was to be a relaxed project growing Pinot Noir and Chardonnay along with a variety of vegetables and fruits, including a grove of olive trees.”

Jaime Flores, agent/owner of the Farmers Insurance office at 310 W. Main St. in Santa Maria, works in his office Wednesday. He is helping his fellow business owners navigate the application processes for a variety of COVID-related economic stimulus/loan/grant programs.