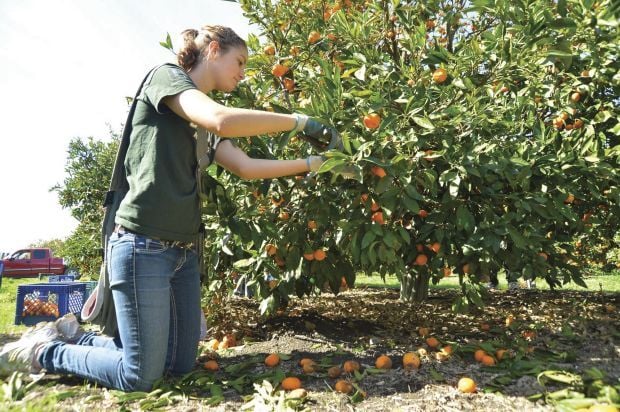 GleanSLO volunteer Julianna Arvin, a freshman at Cal Poly, picks tangerines at Frederick Farm in Nipomo. About a dozen volunteers turned out recently to gather food for the San Luis Obispo County Foodbank. 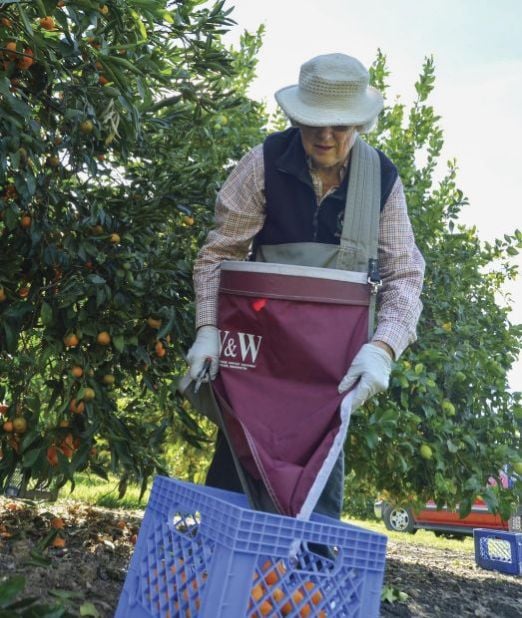 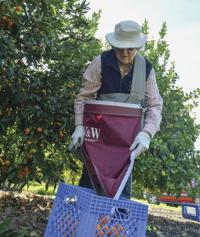 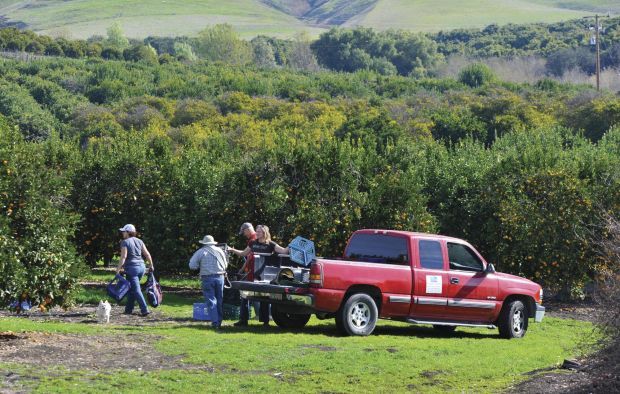 More than 1,000 Central Coast residents volunteer their time and energy to organizations that glean local crops for the good of the community. They pick fruits and vegetables offered by backyard gardeners and commercial growers, then donate the goods to local food distribution centers that serve the Central Coast’s hungry.

GleanSLO volunteer Julianna Arvin, a freshman at Cal Poly, picks tangerines at Frederick Farm in Nipomo. About a dozen volunteers turned out recently to gather food for the San Luis Obispo County Foodbank.

More than 1,000 Central Coast residents volunteer their time and energy to organizations that glean local crops for the good of the community. They pick fruits and vegetables offered by backyard gardeners and commercial growers, then donate the goods to local food distribution centers that serve the Central Coast’s hungry.

Early one recent weekday morning, as fog reluctantly receded from the coastal bluffs near their Shell Beach home, Marv and Pet Daniels gathered their boots, coats and work gloves, then headed out to pick a quarter ton of tangerines.

Their gleaning effort provided them no food, no pay, no traditional workplace benefits.

“It’s fun, and it’s rewarding, and we think of the people who don’t share in the wonderful crop that we have,” Pet said.

The Daniels are among more than 1,000 Central Coast residents who volunteer their time and energy to organizations that glean local crops for the good of the community. They pick fruits and vegetables offered by backyard gardeners and commercial growers, then donate the goods to local food distribution centers that serve the Central Coast’s hungry.

“There’s just so much bounty out there. It’s incredible how much, you know, a tree in Foxenwood can provide. And, as soon as we took it to the Foodbank, it would immediately be distributed to people in need. It felt like we were doing something for the greater good,” said Stephanie Southwick-Hull of Orcutt who has been involved in Backyard Bounty.

According to a 2011 study by the U.S. Department of Agriculture, nearly 15 percent of U.S. households are food insecure at some of time of the year. Nearly 6 percent of those experience very low food security — the food intake of one or more household members was reduced and their eating patterns were disrupted at times during the year because the household lacked money and other resources for food.

Food pantries like these across the nation traditionally depend on castoffs from grocery stores and local residents. Most of the donated goods are packaged, not particularly healthy and often nearing expiration.

But with the growth of volunteer gleaning organizations and interest by local farmers of all descriptions, baskets increasingly are being filled with fresh, local produce.

“The gleaning that we’ve contributed is still so small compared with the potential, but we’re growing slowly to keep up with it,” GleanSLO Coordinator Carolyn Eicher said.

While the Central Coast’s largest food distribution organizations have developed more coordinated efforts in recent years, the local drive to get fresh produce into the hands of those in need is hardly new.

In 1979, a group of Central Coast women who saw the abundance of fresh food languishing in local fields established Harvest Bag. Tireless volunteers gathered leftover produce from farmers in the Five Cities area, even harvested the food themselves when needed. They also solicited food donations from local grocery stores and bakeries as well as contributions of food and monetary donations from local residents.

The group established a Wednesday morning food giveaway at Soto Field in Arroyo Grande that continues to this day under the auspices of the countywide Foodbank. Dozens of volunteers pack several hundred bags of food for lines of people who show up each week.

The countywide Foodbanks have incorporated a variety of food collection programs established by churches and well-meaning volunteers throughout the region.

“GleanSLO started from the Backyard Harvest model out of Paso Robles. They were reaching out with small scale gleans — if someone had a really productive orange tree or someone couldn’t harvest their whole small apple orchard they’d help out,” Eicher said.

In 2010, its first year, GleanSLO volunteers picked 22,000 pounds of fruits and vegetables from local gardens and farms. The following year, they gleaned 38,000 pounds of goods and in 2012, the growing list of volunteers brought in 100,000 pounds of produce, she said.

“The standards for the commercial market are so stringent, if we can get an established relationship with a farmer who knows they really won’t be able to pick what they’re growing, we pick an amazing abundance of perfectly good food.”

One local effort involved brussels sprouts which, while growing bountifully, did not meet the 21-inch-tall requirement for commercial packaging.

“The vegetables were beautiful,” Eicher said.

The effort is not competitive, she said, but cooperative between a variety of organizations and agencies like Santa Ynez Fruit and Veggie Rescue and California Association of Foodbanks. Gleans cross political boundaries and produce is shared as needed between food pantries.

“This effort by local volunteers has allowed us, in the last five years, to provide more fresh produce. Five years ago, the food we distributed was 15 percent produce. Now it’s 47 percent,” Eicher said.

Some local farms have provided their own donations to food distribution programs for years.

“We’re happy to help out. We think it’s a great community service opportunity and a great way for us to give back to the community,” said Brian Talley, president of Talley Farms.

“So few people have any exposure at all to on-the-ground, grassroots farming,” Ikeda said. “It’s an educational process as well to show students where their food really comes from and the work involved in harvesting their food. Hopefully, they’ll have greater appreciation for farmers and farm workers who provide them their food.”

Were it not for the gleaners, Ikeda said, the plants, complete with ripening fruit, would be plowed under.

“If the market prices are really cheap and you may be passing over a field anyway, why not let them cut a section out of there and take it to the Foodbank,” Ikeda said.

For Jacqueline and Gary Frederick of Clamshell Farms in Nipomo, its simple.

“We invite them out any time we have a bumper crop,” Jacqueline said.

In 2012, GleanSLO volunteers picked 25,000 pounds of oranges from the 55-acre citrus farms. Other gleans have included tangerines, lemons, limes and avocados.

“I’m always impressed with the volunteers they have come out, Jaqueline said. “The volunteers I’ve met are usually people who have other occupations. They donate and volunteer their time to come out to the farm. They’re people from all walks of life helping feed people who need food.”

“A lot of the picking is on hillsides, on rocky slopes. It’s a lot of work, but it’s a lot of fun because the people we work with are all volunteers who are there for the same effort,” he said.

Together, the Danielses have picked apples, oranges, grapefruit, lemons, avocados, tangerines, squash and more. Brussels sprouts, they said, were exhausting.

“One of the most difficult was in the rain on this black, gummy soil. Most of the people had tennis shoes that had 20 pounds of mud on each one,” Marv said.

Even so, the couple said, picking fresh food for those in need makes the effort worthwhile.

Freelance writer Jennifer Best can be reached at jbest@bestfamilyadventures.com.

• GleanSLO in need of picking bags, orchard ladders, farm carts, knives, pruners, aprons, gloves and first-aid kits. If you have any of these gently used items, or want to purchase new items to donate, drop them off at a Farm Supply near you by Feb. 16. With a donation, Farm Supply will offer the donor $10 off the purchase of Felco #2 Pruners.