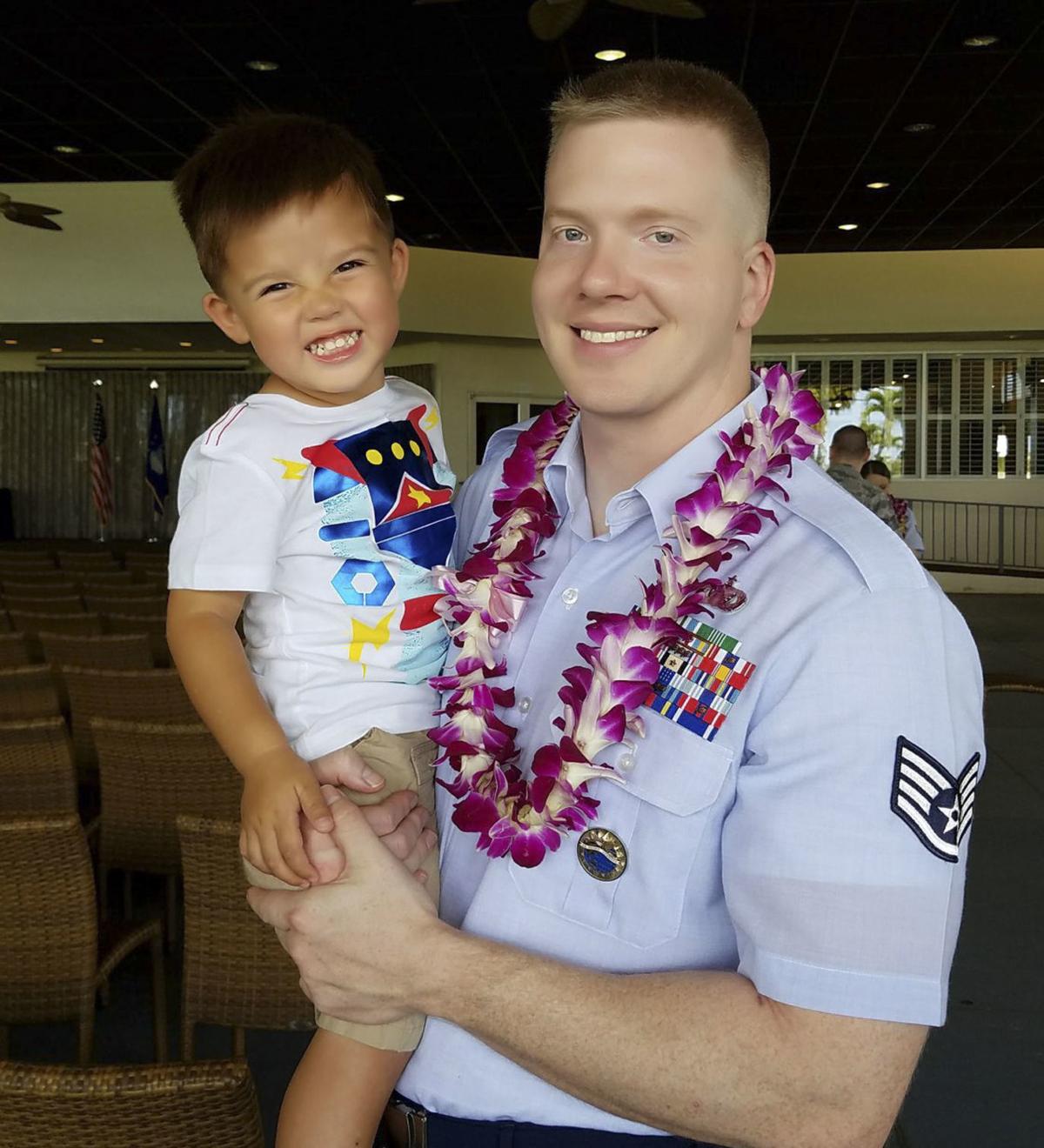 Tech. Sgt. Josef Margetiak, 614th Air Operations Center section chief, poses for a photo with his son at his Community College of the Air Force graduation. In late 2018, Margetiak was diagnosed with testicular seminoma cancer, and once cleared, he was diagnosed again in 2019. Throughout his fight with testicular cancer, Margetiak has been motivated by both his family and his goals to become a Physical Therapy to help others be the best versions of themselves, while pushing forward resiliently to complete his everyday duties. 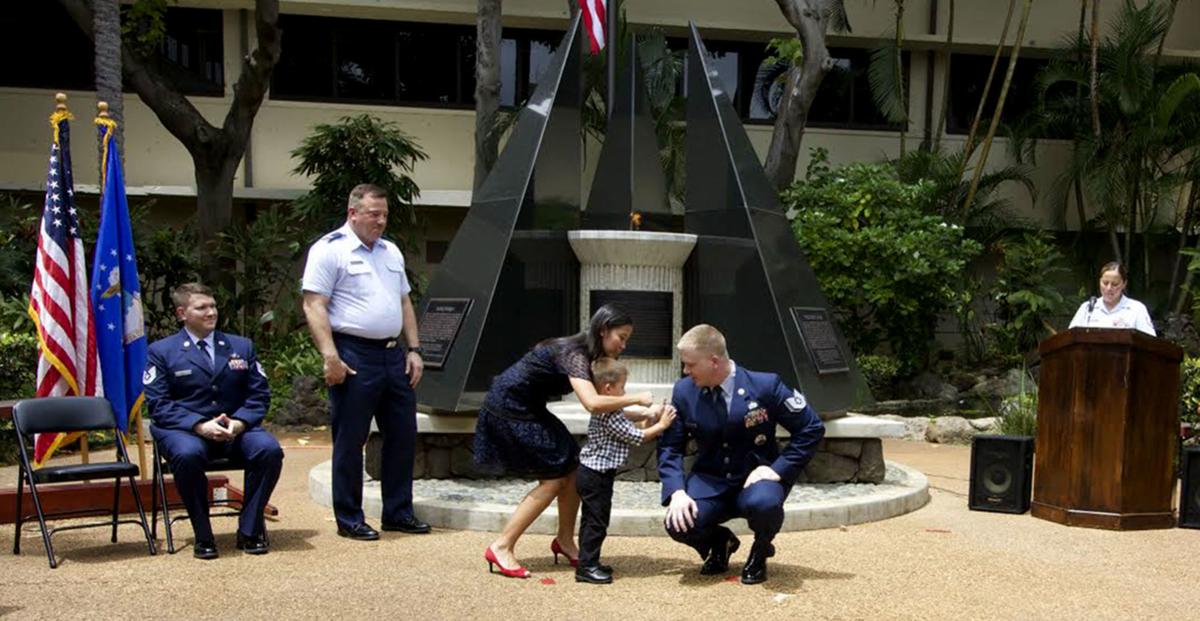 Catherine and Tian Margetiak help tack on Tech. Sgt. Josef Margetiak’s, 614th Air Operations Center section chief, new rank during his promotion to Tech. Sgt. In late July 2018, Margetiak was diagnosed with testicular seminoma cancer, and once cleared, he was diagnosed again in 2019. Despite two run-ins with cancer, Margetiak continues to serve in the U.S. Air Force at Vandenberg Air Force Base.

“I remember that visit vividly. I went in later that afternoon, naively believing that I would be home after an hour and be back in time for dinner,” said Tech. Sgt. Josef Margetiak. “After Dr. Schisler examined me, he explained his concerns and told me the bad news.”

It had been a long time since the 614th Air Operations Center section chief had been back home to visit his family. In July of 2018, Margetiak, his wife Cathrine, and son Tian decided to make the trip from Joint Base Hickam, Hawaii, to visit his parents in Ohio.

When they finally made it to his parent’s house, they celebrated Tian’s birthday, enjoyed the local county fair and chased fireflies in the back yard. Unfortunately, it would be during this trip that Margetiak would start to notice some abnormal pain and a lump on his body.

As concerned as he was, Margetiak decided to wait until their return to Hawaii to visit with his Primary Care Manager, before directly involving his parents or other family members.

“When I was able to meet with my Primary Care Manager at the Hickam clinic, I was referred to Dr. Schisler, a Urology Specialist at the Tripler Army Medical Center for a second opinion,” said Margetiak. “After Dr. Schisler examined me, he explained his concerns and told me the bad news. That while he wasn’t 100% certain it was cancerous, he was 90-95% sure. A second doctor was brought in to examine me and she came to the same conclusion… cancer.”

What he thought would only be a one hour appointment lasted close to four hours. Blood tests were performed to check for tumor markers, as well as an ultrasound. While waiting for the results, he went outside to get some air and decided it was time to call his wife.

“I explained everything I had been told and tried to remain strong,” said Margetiak. “After talking to her, I called my First Sergeant, and the strength that I managed to somehow cling to during the call with my wife left me the second after I told him I had cancer.”

According to Margetiak, that short 5 minute phone call would be one of the toughest conversations he had ever had in his life.

“I lived my whole life reading the stories of cancer survivors, or the friends and family that are left behind,” explained Margetiak. “The pain, surgeries, treatments, and often times death, have always been the struggles of someone else… but never me. But this time it was me, and it was a difficult thing to cope with.”

Only four short days after the initial visit, Margetiak would undergo a radical orchiectomy to remove the cancer. The surgery went off without a hitch, but the next few weeks of recovery were spent in bed.

“Within a pretty short timeframe post-surgery, I was officially diagnosed with testicular seminoma,” said Margetiak. “Because my cancer was caught relatively early, I possessed an 80-85% chance that the surgery alone would solve my problem.”

Through the remainder of 2018 and nearly all of 2019, Margetiak believed he would fall into that percentage, meaning that he was cancer free. However, this was not the case. After moving to Vandenberg Air Force Base, Calif., in the summer of 2019, he would doctors for a follow up and quarterly visits.

Margetiak would get that news in late December that his cancer had returned.

Margetiak’s doctor found a swollen lymph node, likely a stage 2A seminoma cancer. Since this type of cancer is extremely sensitive to radiation and to prevent being over treated, Margetiak opted to undergo radiation therapy.

“Staying positive was tough. No matter how good everything seems to be, we’re always one phone call or text message away from a bad day,” said Margetiak. “I think it’s important to realize that bad days will happen. Maybe it’s tomorrow, or next week or next year. Bad days will happen, but they will also give us the opportunity to show our strength. That strength can come from within, and it can come from the people we surround ourselves with.”

For Margetiak, the process of radiation therapy was fairly similar to getting an X-ray or a CT scan.

“There isn’t any pain, and the whole process is pretty quick. Like with all cancer treatments though, the more doses you are exposed to, the more there is the potential for both short and long-term side effects,” said Margetiak. “In my case I had to undergo 20 treatments, and some immediate short-term side effects included nausea, loss of appetite, fatigue, and radiation burns.”

According to Margetiak, the nausea was cured after the first session, with the help of prescription medication, but nothing could help with his loss of appetite, fatigue, or the burns he was developing. Within 4 weeks he had lost approximately 15 pounds, as he was only eating a couple bowls of soup and some toast on any given day.

“After about the second week, I started sleeping more and more. For some people that might sound like a relatively simple side effect, but where normally you feel rested after sleeping, I woke up still feeling tired,” he said. “If it was not for my wife, I’m not sure how I would have taken care of my son or myself. In addition to all of that, I started to develop burns along the portions of my body that were being exposed to the radiation treatment.”

Following his treatment, Margetiak began a 6-week recovery period in which his appetite returned, he regained the lost weight and healed from his burns. However, at the seven to eight week mark, he developed a new side effect.

“It was similar to the peripheral neuropathy that patients who undergo chemotherapy often experience, but mine was centered around my hips, thighs, and parts of my abdomen and lower back,” said Margetiak. “It can be a difficult thing to describe, but it was like my nerves had all of a sudden become hyper sensitive. The simplest thing like wearing shorts, or a blanket brushing up against my skin would cause intense pain.”

Finally, after nearly three months since his last treatment date, Margetiak says he is finally starting to feel like himself again. He even the long awaited news that he is officially back in the clear.

“Family is what it’s all about when it comes to either finding the motivation to fight cancer or to just simply get out of bed in the morning,” said Margetiak. “I want to be able to give my wife the opportunity to pursue and help mold my son into a person that will have a positive impact on the world someday.”

During his battle with cancer, Margetiak didn’t give up on his career and continued to think of new ways to be effective at work.

“When we first got the news, we told him to let us know and we’d do whatever he needed from us,” said Master Sgt. Kyle Rogoski, 614th Air Operations Center flight chief. “We offered for him to take off work to get his mind in a good place, but he said that coming in helps keep his mind right.”

Margetiak’s dedication to his job and to his country were unwavering. While he was continuing to get better and work on his health, he exemplified the Air Force core values, but none more than Service Before Self.

“He never stops. He’s always got the team in mind and he’s one of the most professional people I know,” said Rogoski. “Once he started treatment and the COVID-19 pandemic hit, he didn’t come into work, but that didn’t stop him from finding ways to contribute. His confidence gave me confidence.”

Magetiak has not let cancer stop him from reaching his goals or thinking of what is to come in his future. Aside from his family, Magetiak’s motivation for his post-military career his goals of becoming a Physical Therapist, to help people develop the best versions of themselves.

“When I was approached to tell my story, my initial reaction was to say ‘No,’” explained Magetiak. “I don’t feel special, or necessarily unique. My battles with cancer, while difficult in their own right, aren’t as extreme as others have faced. That initial reaction faded away relatively quickly though, because I strongly believe that even if only one person reads my story and is inspired from it, then it’s worth all the effort to get my story out there. And if you are that person right now reading the words on this page, then I want you to know that I care about you, I believe in you, and no matter what struggle you’re facing, you have the strength to make it through it.”

The ICBM, which is a component of the United States’ nuclear weapons system, was launched from the northern portion of VAFB at 12:21 a.m. It reportedly traveled more than 4,200 miles to the Kwajalein Atoll in the Marshall Islands.

During a “State of the Base” webinar on Thursday, 30th Space Wing Commander Col. Anthony Mastalir expressed a great deal of excitement, as well as a good bit of uncertainty, for what is expected to be the most transformative period in the installation’s history.

PATRICK AIR FORCE BASE, Fla. -- An Air Force meteorologist is using the service’s We Are All Recruiters program to chase his dream of playing …

The launch of the ICBM, which is a component of the United States’ nuclear weapons system, is scheduled for a window between 12:21 and 6:21 a.m. The test was announced by the 30th Space Wing on Monday morning.

Goldfein honored for service as Chief of Staff

With only days remaining in his service as the Air Force’s 21st Chief of Staff, Gen. David L. Goldfein was commemorated in a July 31 ceremony at Joint Base Anacostia-Bolling, Washington, D.C., and in the announcement that one of his quotes was etched into the Air Force Memorial’s Wall of Valor.

Tech. Sgt. Josef Margetiak, 614th Air Operations Center section chief, poses for a photo with his son at his Community College of the Air Force graduation. In late 2018, Margetiak was diagnosed with testicular seminoma cancer, and once cleared, he was diagnosed again in 2019. Throughout his fight with testicular cancer, Margetiak has been motivated by both his family and his goals to become a Physical Therapy to help others be the best versions of themselves, while pushing forward resiliently to complete his everyday duties.

Catherine and Tian Margetiak help tack on Tech. Sgt. Josef Margetiak’s, 614th Air Operations Center section chief, new rank during his promotion to Tech. Sgt. In late July 2018, Margetiak was diagnosed with testicular seminoma cancer, and once cleared, he was diagnosed again in 2019. Despite two run-ins with cancer, Margetiak continues to serve in the U.S. Air Force at Vandenberg Air Force Base.