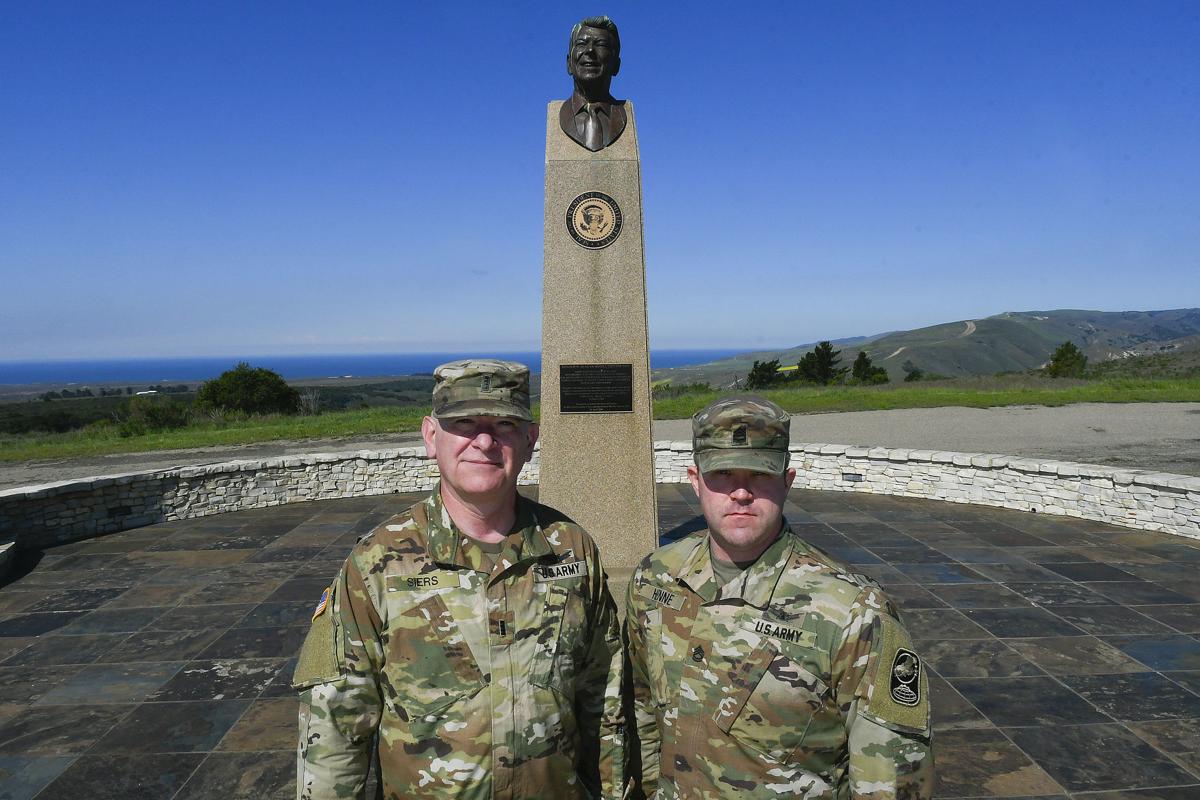 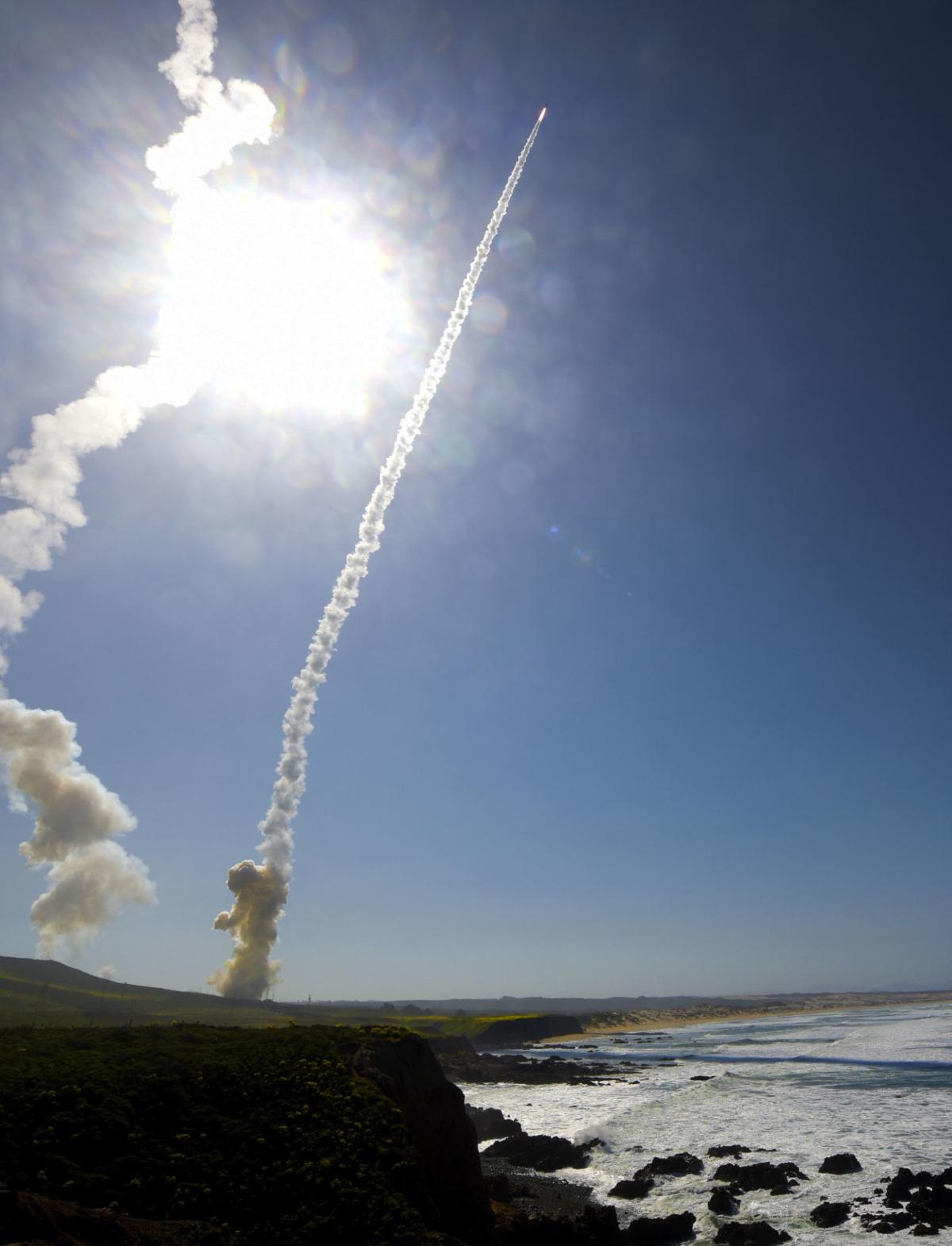 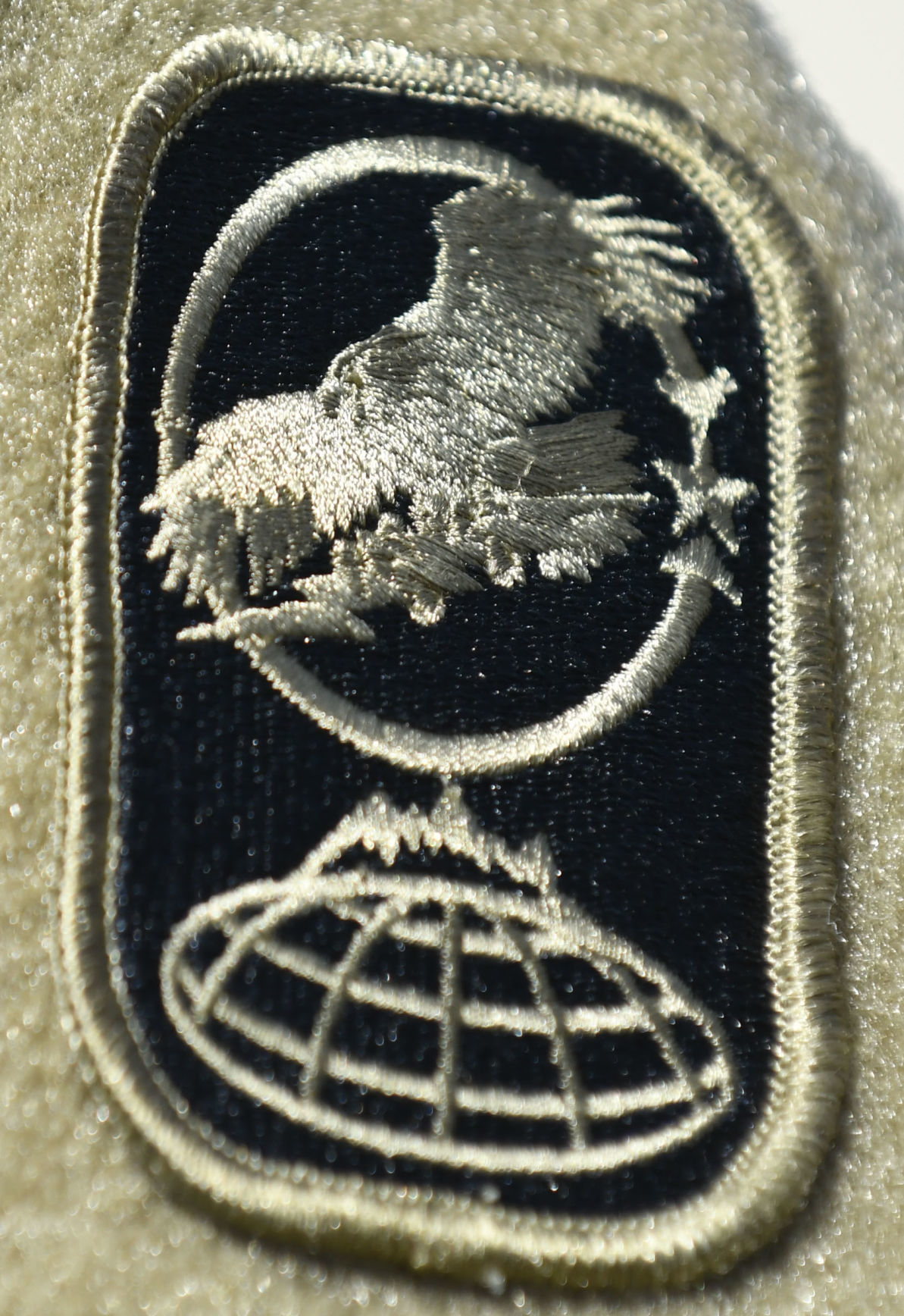 The unit patch for the 100th Missile Defense Brigade of the Colorado Army National Guard is shown on a soldier's uniform. 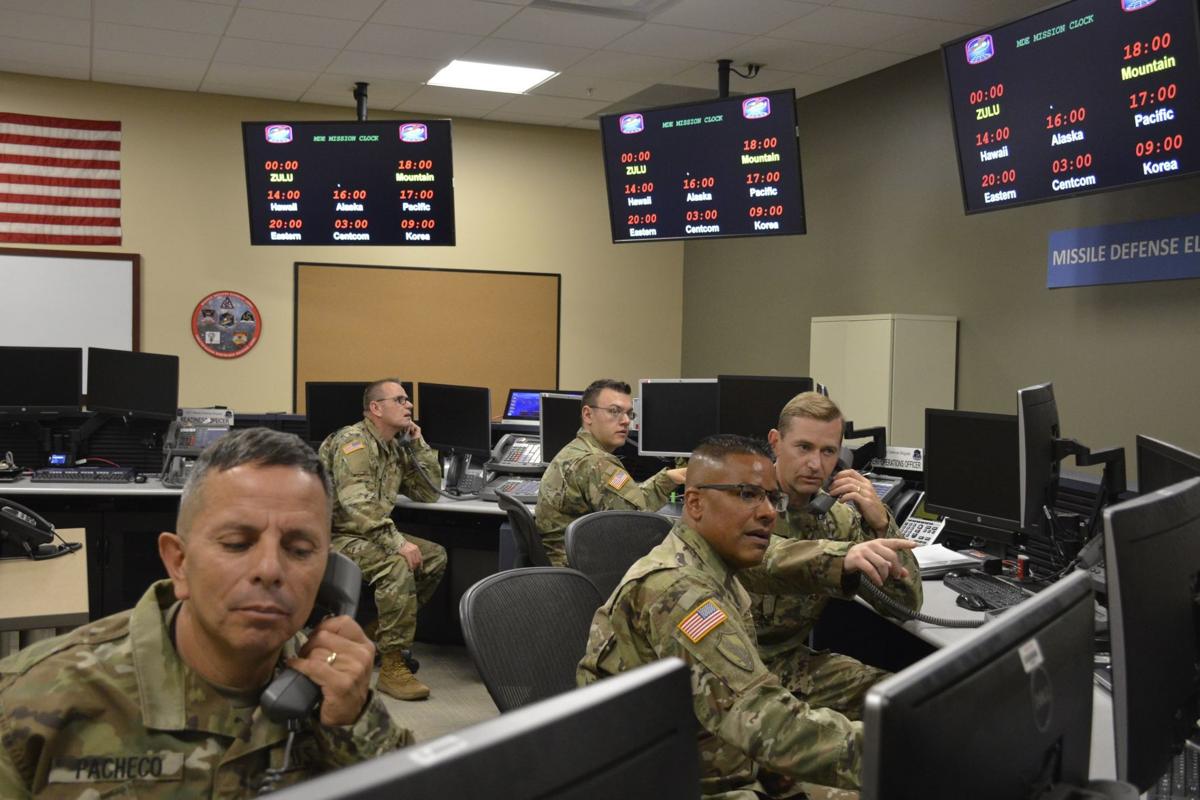 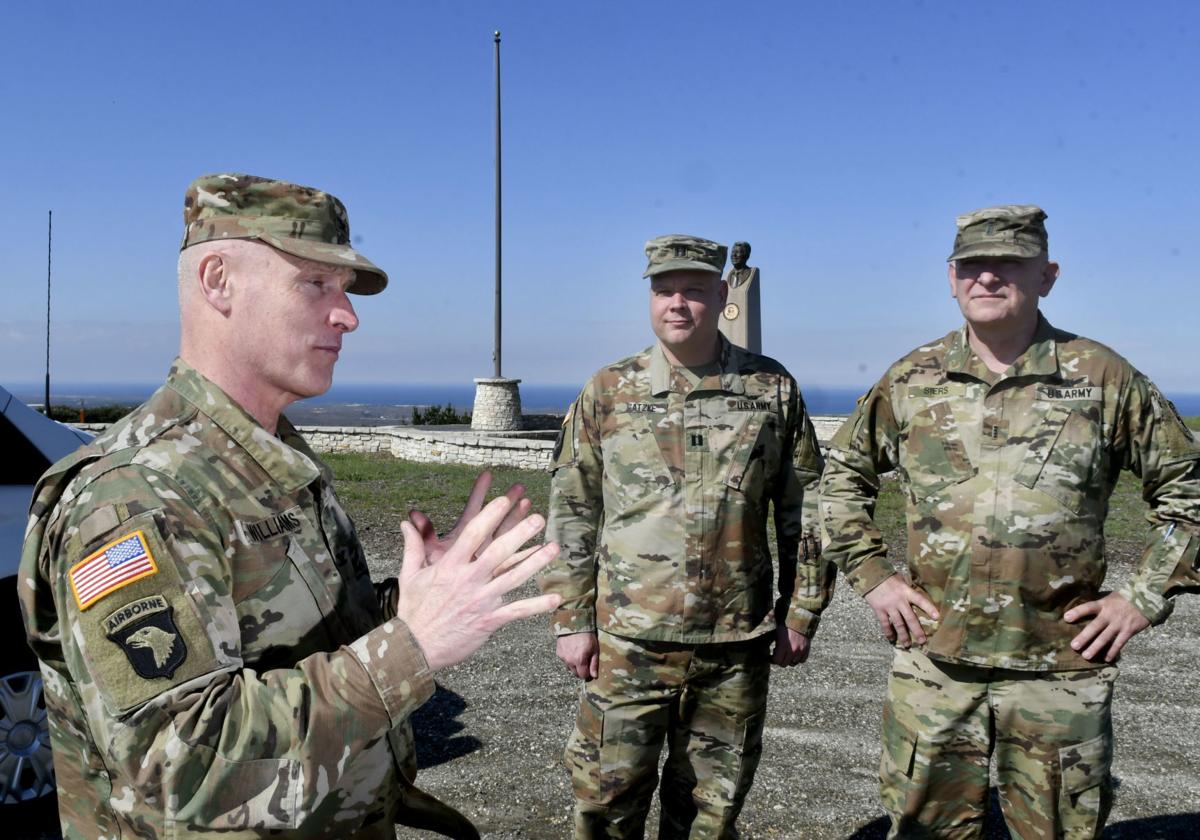 Col. Chris Williams, left, leader of the 100th Missile Defense Brigade, talks about the Colorado Army National Guard unit that works in part out of Vandenberg Air Force Base.

Soldiers of the 100th Missile Defense Brigade were stationed at their consoles on March 25, 2019, standing a round-the-clock watch inside a secret location at Schriever Air Force Base in Colorado Springs.

Col. Chris Williams, brigade commander, was on the operations floor overseeing brigade personnel manning consoles when they received an alert of an in-bound intercontinental ballistic missile launched at the US.

The soldiers took immediate action and, within seconds, initiated a sequence that launched two interceptor missiles from Vandenberg Air Force Base in a salvo, meaning one right after the other, and struck the ICBM re-entry vehicle in the earth’s atmosphere.

The ICBM was a test and was launched 4,000 miles away from the Reagan Test Site on Kwajalein Atoll in the Marshall Islands in an exercise to test the Brigade’s readiness in protecting the U.S. against such threats.

“We had an idea the day of the test, but we didn’t know when,” said Williams, who described the test as “no joke” and added that having soldiers knowing when such a test would happen is unrealistic in a real-life scenario.

The history and critical importance of the mission was explained on a clear, sunny morning at Vandenberg AFB by a group of brigade soldiers.

Formed in 2003, the brigade is the only unit that protects the country against ICBMs. Assuring the missiles at Vandenberg fire is the responsibility of Detachment 1, which became operational in 2011, and is a tight-knit group of Army National Guard soldiers.

The brigade’s genesis comes from the Strategic Defense Initiative announced by President Ronald Reagan in 1983, which called for a missile defense system to protect against nuclear ICBMs. The brigade's unofficial slogan is “the 300 defending the 300 million.”

Prior to this initiative, the only “defense” against nuclear weapons was mutual assured destruction, or the concept that U.S. adversaries would be equally destroyed with such weapons, Sheely said.

“The slogan summarizes the strategic importance of the unit,” said Sgt. First Class Grant Henne, the senior non-commissioned officer in charge of the detachment. “It’s not your typical brigade construct.”

Its soldiers work closely with the Missile Defense Agency and report directly to a 4-star general within U.S. Northern Command, illustrating the expedience of their mission, according to brigade spokesman Staff Sgt. Zach Sheely.

Brigade soldiers in Colorado man their consoles on a 24-hour basis, seven days a week, 365 days a year.

The consoles are spaced six feet apart, assuring social distancing during the COVID-19 pandemic, according to Sheely, adding that the pandemic hasn’t degraded the brigade’s readiness and it never will.

The brigade operates a highly-sophisticated, and classified, fire control system that's used to fire at least 40 interceptor missiles, with the majority of them located at Fort Greely in Alaska. The missiles are a part of the U.S. ground-based mid-course defense system.

Vandenberg has four missiles, including two used for testing, and it’s the only testing location for the brigade, Sheely said.

The fire control system, which is highly classified, is mainly automated. Henne described his unit as the “human in the loop” to manually enable the system to ensure the missiles go off when needed.

Because the system is classified, Henne couldn’t go into detail about what his unit does.

When the missiles are fired, they’re launched at approximately 15,000-miles-per hour towards an ICBM. The unit has about a 20 minute window to hit the target, Sheely said.

The missiles themselves don’t have explosives. Instead they’re kinetic, meaning they use motion to strike the target. The piece of the missile that hits the ICBM is known as an exo-atmospheric kill vehicle, because it’s designed to strike the target in the earth’s atmosphere. Henne described it as “hitting a bullet with a bullet.”

Because of the secrecy and precision used to maintain and operate the missile system, entry into the brigade is highly competitive.

Where the Army standard for passing tests in 70%, soldiers who wish to join the brigade must receive a 90% passing grade following the missile defense qualification course, which lasts seven weeks, Sheely said.

When handshakes and high-fives were prohibited on Vandenberg Air Force Base due to the spread of COVID-19, personnel from the 30th Space Wing were tasked to find a new personal greeting. And the corona kick was born.

Reports of domestic violence in Santa Barbara County have dropped in the weeks following a statewide stay-at-home order, prompting concern on Tuesday from local law enforcement officials who urged victims and members of the public to call police if they suspect abuse.

The unit patch for the 100th Missile Defense Brigade of the Colorado Army National Guard is shown on a soldier's uniform.

Col. Chris Williams, left, leader of the 100th Missile Defense Brigade, talks about the Colorado Army National Guard unit that works in part out of Vandenberg Air Force Base.