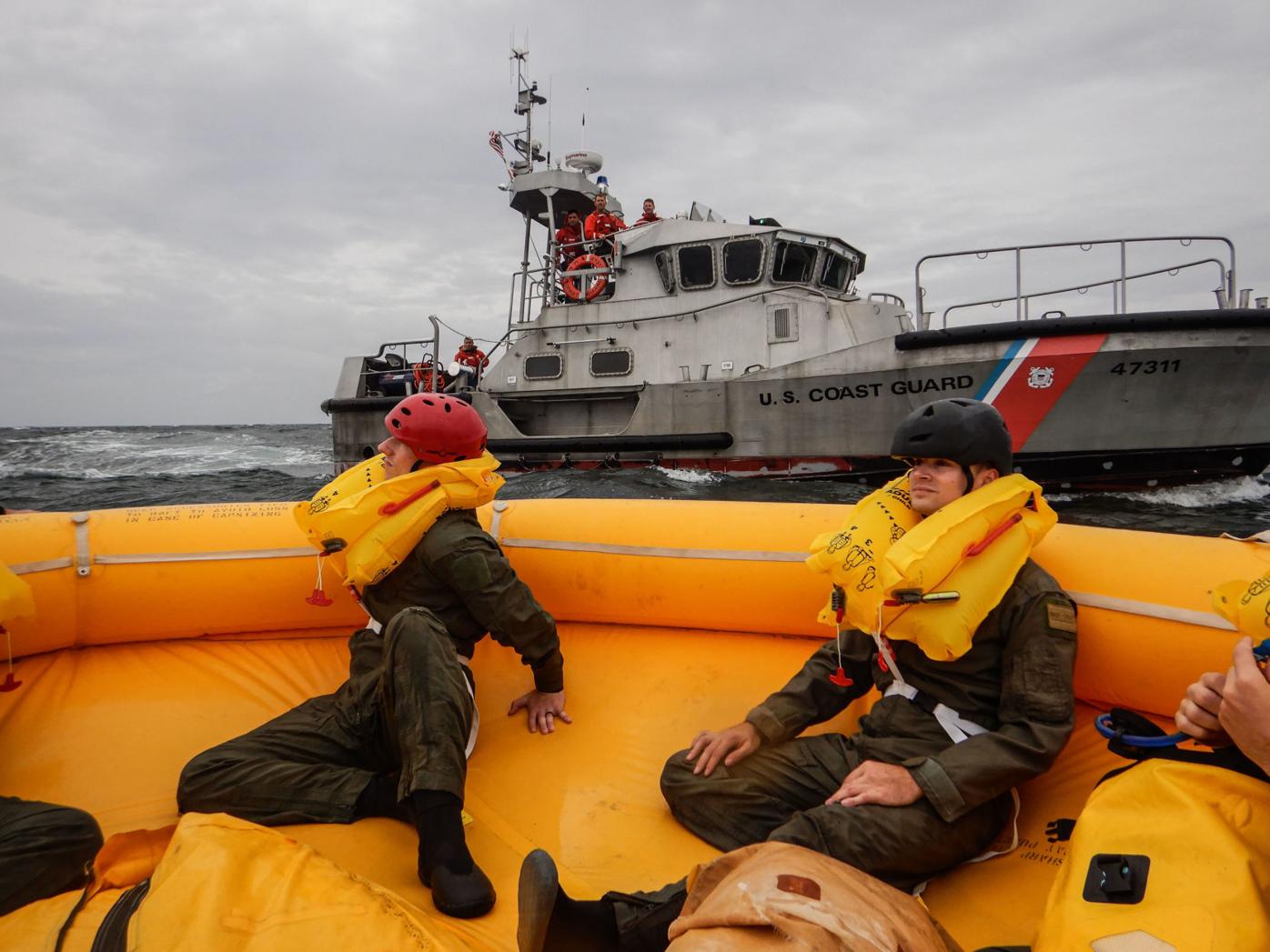 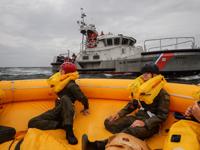 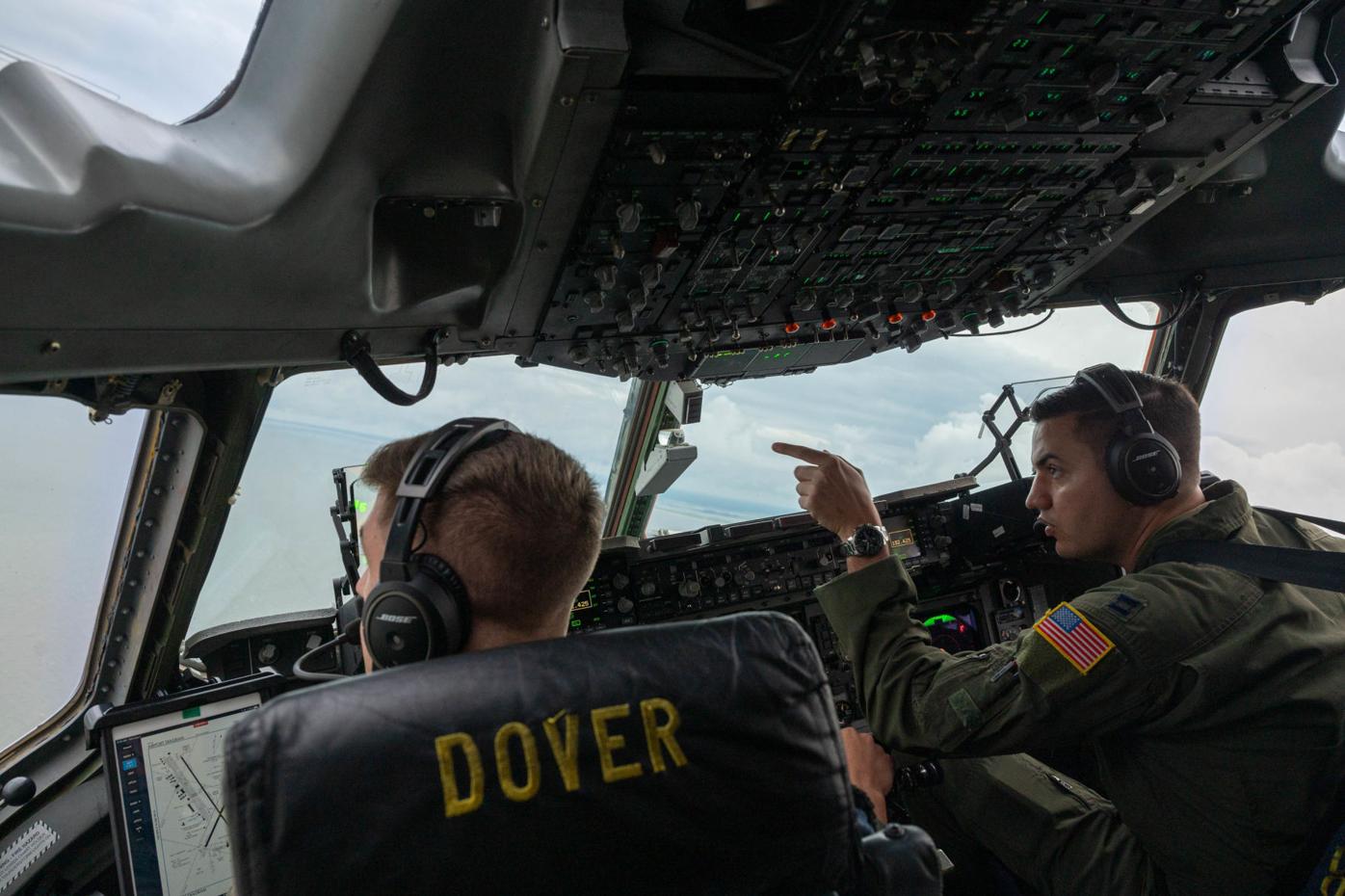 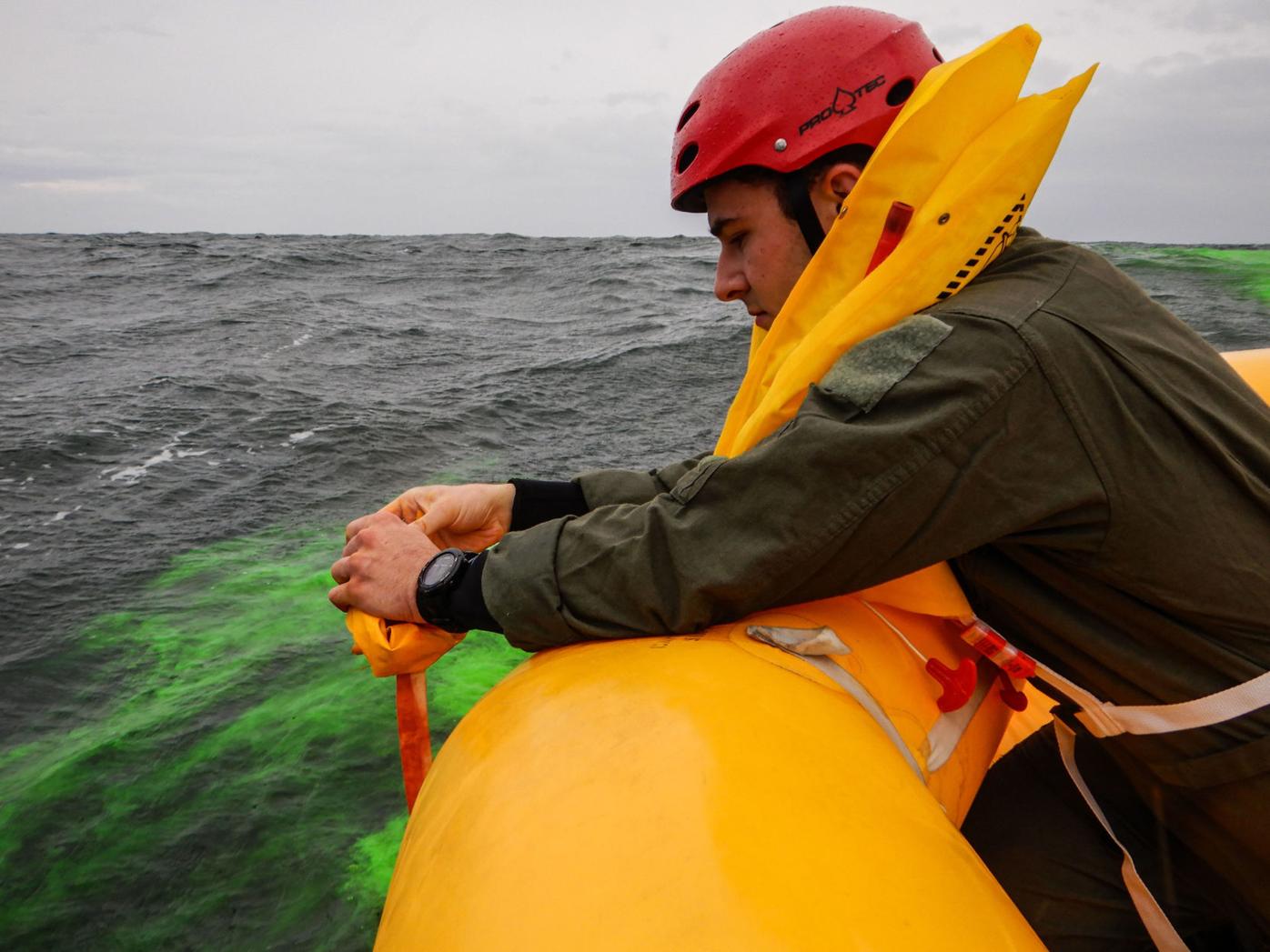 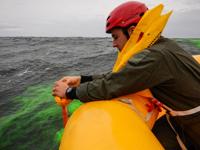 COAST GUARD STATION INDIAN RIVER INLET, Del. -- Imagine being in a yellow life raft in the middle of the ocean after surviving an aircraft incident. There is an aircraft flying several hundred feet overhead. The best chance of being rescued lies in an ability to use the issued survival equipment to signal the position to the aircraft.

While this situation might seem far-fetched, it is a very real possibility for aircrew members flying out of Dover Air Force Base, Delaware.

“The whole idea for Exercise Castaway started with a picture,” said Tech. Sgt. Derreck Day, 436th OSS SERE specialist. “I was conducting a water survival preparation course [that includes] a picture of a 46-man life raft, [where] at 4,000 feet is extremely difficult to spot. Looking at that photo, I thought ‘what is the probability of finding an individual, if not, a whole crew of people in a life raft out in the Atlantic Ocean.’”

The picture Day refers to is a photo taken from a C-17 Globemaster III at an altitude of about 4,000 feet. The raft is nearly impossible to spot with the naked eye. At that altitude, the raft appears to blend in with the ocean waves; an incredible challenge to anyone attempting to locate survivors in the open ocean.

“It’s a photo of the largest life raft we have in our inventory and in that photo you can’t even see the life raft,” Day said. “So looking at that situation, I thought to myself, ‘why not exercise this.’”

During Exercise Castaway, Day and four Airmen from the 436th OSS SERE flight were escorted 5 miles out into the Atlantic Ocean by Coast Guardsmen from Indian River Inlet.

“We got to Coast Guard Station Indian River and by the time we broke through the waves out of the inlet, about 4 and a half miles off shore, the 25 mile buoy was reading 5 foot seas and 17 knot winds,” Day said. “I’m very grateful that the Coast Guard was there to provide over watch in case of an emergency.”

Once in place, the SERE crew then prepared their signaling equipment including the combat survivor evader locator radio, sea dye, flare and life raft canopy. This marked the official start of Exercise Castaway.

Day explained their objective was to go through the issued survival equipment, use it, devise tactics, techniques and procedures, and to relay pertinent information to assist the aircrew in spotting them.

Two aircraft crews participated in the exercise: a C-17 from Dover AFB and a MH-65D Dolphin from CGAS Atlantic City. As the acting on-scene commander, the C-17 crew spotted the life raft and relayed location information to the MH-65D for simulated rescue and hoist practice.

“The scenario for the aircrew aboard the C-17 was for them to respond to a simulated downed aircraft call, provide a search pattern, exercise their on-scene commander checklist and take photographs of what’s happening through their perspective,” Day said. “As they role-play on-scene commander, once they spotted the life raft, they notified Coast Guard Station Atlantic City.”

As the C-17 was spotted in the distance, the crew began their series of signaling attempts to the aircrew aboard the aircraft.

“We came in at 500 feet through several passes while the guys in the raft were trying out different signaling techniques,” said 1st Lt. Nicholas Johnson, 3rd Airlift Squadron pilot. “Then we climbed to higher altitudes to see how clear we can see those visuals at different altitudes and capture data on what would be the best altitude to ingress to try and find guys on the ground.”

Spotting the life raft became a challenge on its own due to the high-speed winds and tall waves. It took a couple passes before the aircrew spotted the life raft.

“At first there were no visuals,” Johnson said. “It was just them on the raft and we had to find them. Even at 500 feet, which is pretty close to the ground, we weren’t able to see them until we were right on top of them.”

With each pass over the raft, the aircrew then ascended to higher altitudes to observe the effects altitude had on spotting the life raft. The higher they climbed, it became increasingly difficult to keep track of the life raft.

“There are a lot of lessons learned that I plan on relaying to the aircrew that could find themselves in that situation,” Day said. “It was amazing to see the interaction between all participating agencies and record all the success and failures that happened during the exercise.”

During flight operations, there is always risk involved. For Dover AFB, being prepared in case of a real world incident means readiness and tactful knowledge of basic water survival and search and rescue principles. Knowing how to signal aircraft aiding in rescue while also experiencing the dangers of open water is paramount to survival. The SERE team here is dedicated to ensuring aircrews have the skills needed to give themselves the best chance of survival.