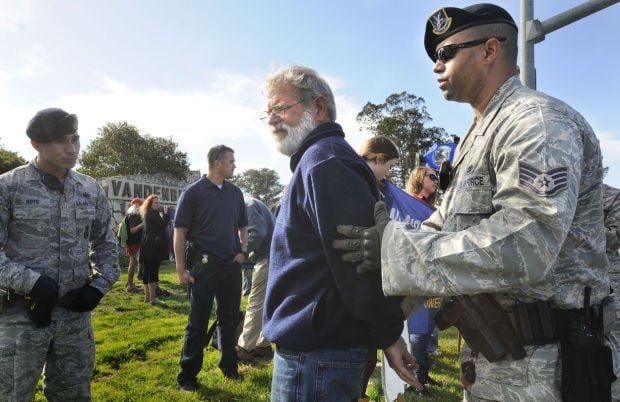 Dennis Apel is arrested Friday for protesting at Vandenberg Air Force Base. 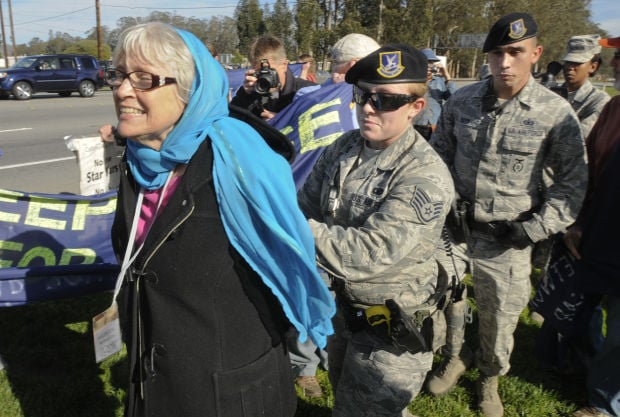 MacGregor Eddy of Salinas is arrested for protesting on Friday at Vandenberg Air Force Base. Len Wood/Staff 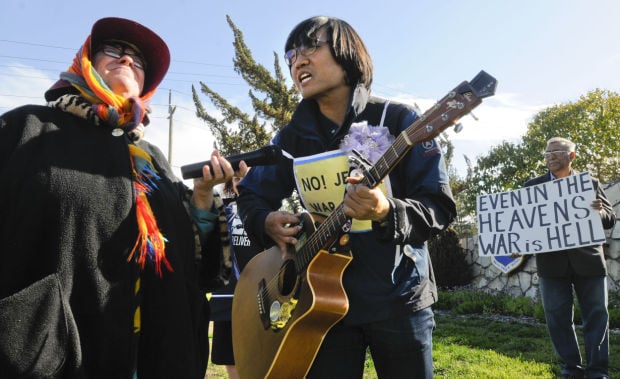 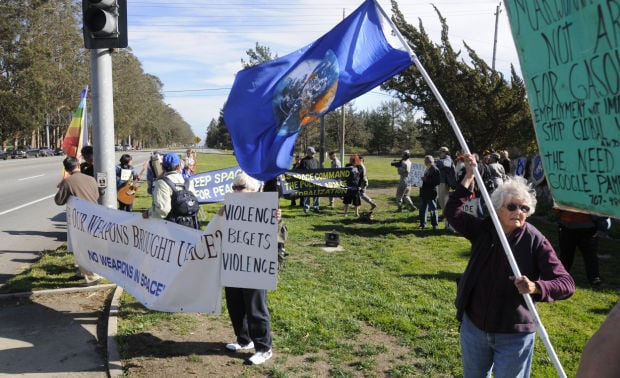 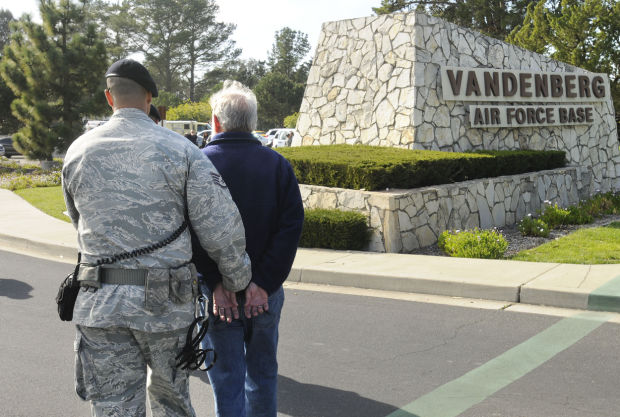 Dennis Apel is arrested for protesting on Friday at Vandenberg Air Force Base. Len Wood/Staff 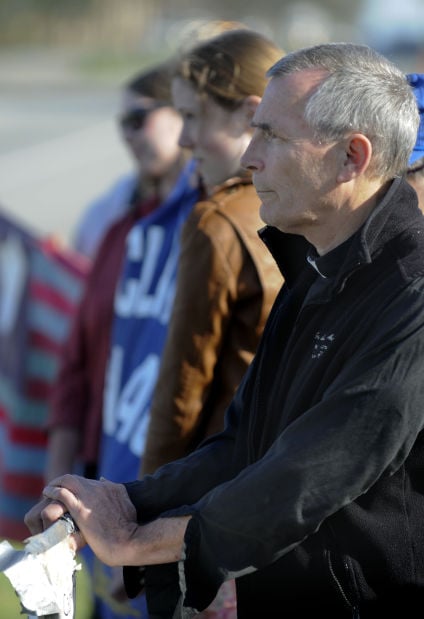 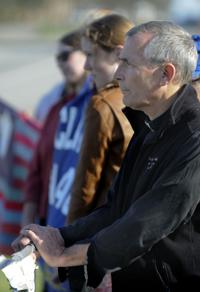 Dennis Apel is arrested Friday for protesting at Vandenberg Air Force Base.

MacGregor Eddy of Salinas is arrested for protesting on Friday at Vandenberg Air Force Base. Len Wood/Staff

Dennis Apel is arrested for protesting on Friday at Vandenberg Air Force Base. Len Wood/Staff

Activists from around the world held a Friday afternoon vigil at Vandenberg Air Force Base to oppose military programs and show solidarity with local protesters, two of whom again were arrested for trespassing.

Approximately 30 people attended the hour-long vigil which launched this weekend’s 22nd annual space organizing conference in Santa Barbara. The conference involves the Global Network Against Weapons & Nuclear Power in Space, made up of 150 peace and religious groups opposed to what they say is the development of a new arms race in space.

But as protesters spoke Friday, Air Force security forces members walked up to Santa Maria resident Dennis Apel, handcuffed him and led him away as other sign-holding protesters chanted “Free Dennis Apel.”

Apel has been arrested more than a dozen times during protests at Vandenberg’s front entrance. A Supreme Court ruling last month found the Air Force has the right to ban him from the base, even the designated protest area. But some justices expressed doubt about whether a ban would survive a challenge on First Amendment issues.

Another veteran protester, MacGregor Eddy of Salinas, also was taken away in handcuffs although she contended her “ban and bar letter” had expired so she was allowed to be there.

Both were cited and released off base as is common procedure.

Not arrested was Father Steve Kelly, another longtime activist who was taken into custody last week at the base. He tried to keep a low profile Friday, although his presence was announced at one point on the portable audio system.

“We primarily have come here to Vandenberg because we want to stand with the local activists who have been protesting outside of this Space Command base for many, many years,” said Maine resident Bruce Gagnon, coordinator of the Global Network and conference organizer. “We want to come to express our gratitude and our solidarity with these courageous local citizens who are helping to connect the dots with U.S. military bases around the world.”

The protest included people from across the U.S. plus South Korea, Norway and England.

Satellites launched from Vandenberg are used to coordinate U.S. military operations around the globe, Gagnon noted.

“These military satellites and this entire military program is exceedingly expensive and the Pentagon brags that the militarization of space will be the largest industrial project in the history of the planet Earth,” Gagnon added.

Other speakers were New York resident Alice Slater of Abolition 2000 and the Santa Barbara-based Nuclear Age Peace Foundation, and Dave Webb of Leeds, United Kingdom and a member of the Campaign for Nuclear Disarmament.

“This is what it’s come to — that you don’t even have free speech in the land of the free,” Slater said, veering from her talk about eliminating nuclear weapons as Apel was led away. “This man is being arrested for protesting against nuclear missiles.”

Along with speeches, the vigil included singing, with the words “Space weapons in the sky” used as lyrics to the tune “Ghost Riders in the Sky.”

Armed Vandenberg personnel, in both military uniforms and civilian clothing, watched silently, but the atmosphere was light-hearted and respectful. One woman asked the group an adjective-filled question, kicking off banter about her role as a former English teacher before she told them a joke.

Apel is listed among the speakers scheduled for the conference’s public forum at 7 p.m. today at the Trinity Episcopal Church in Santa Barbara. David Krieger from the Santa Barbara-based Nuclear Age Peace Foundation also is set to speak.