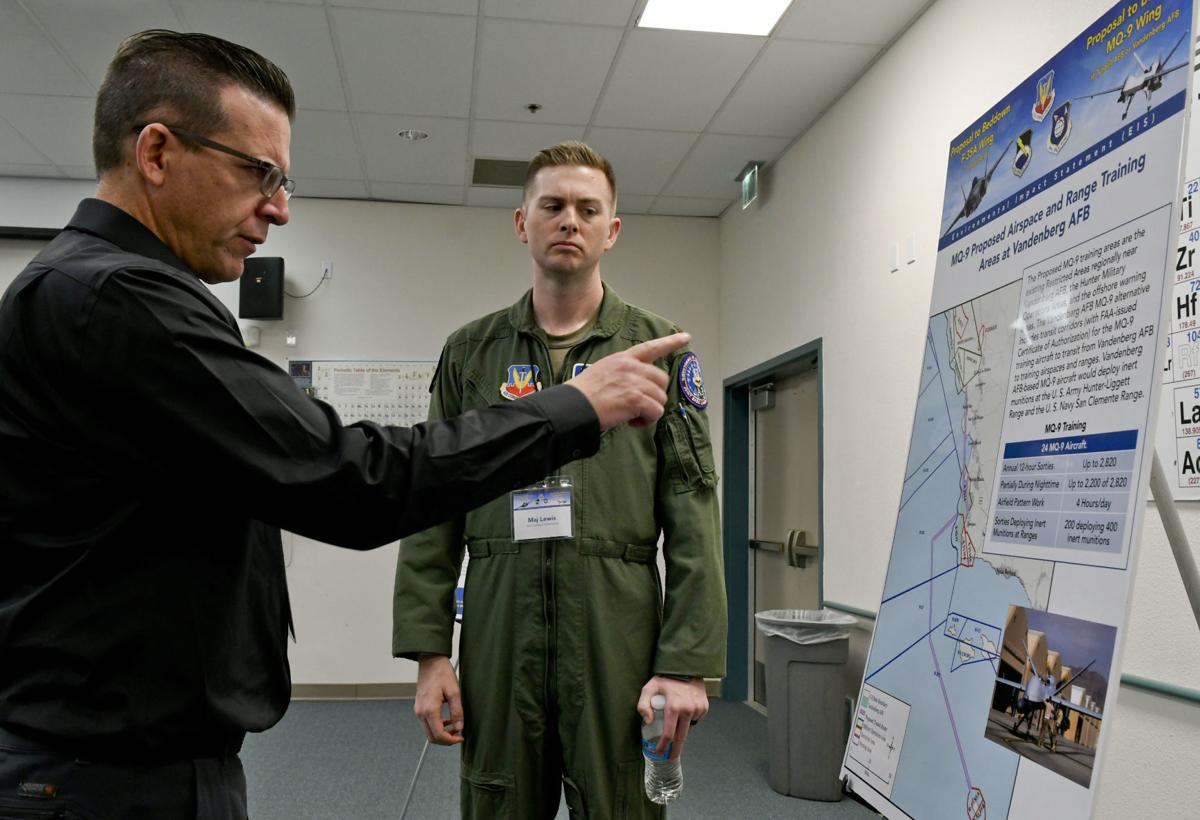 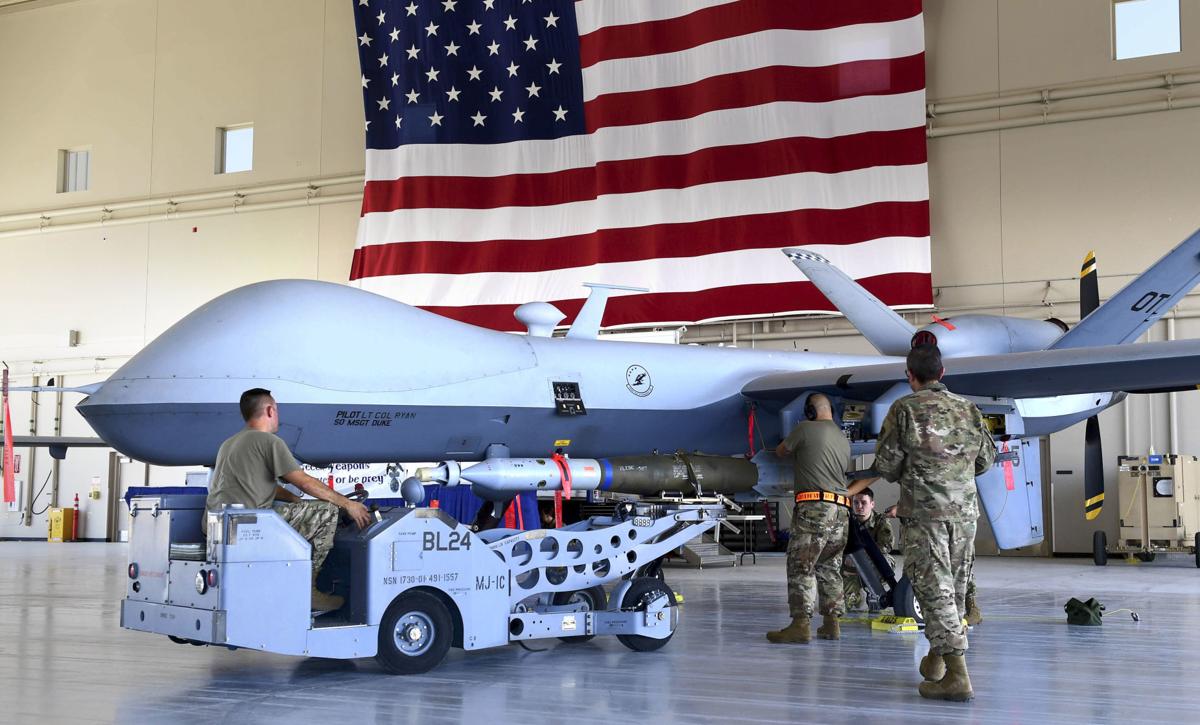 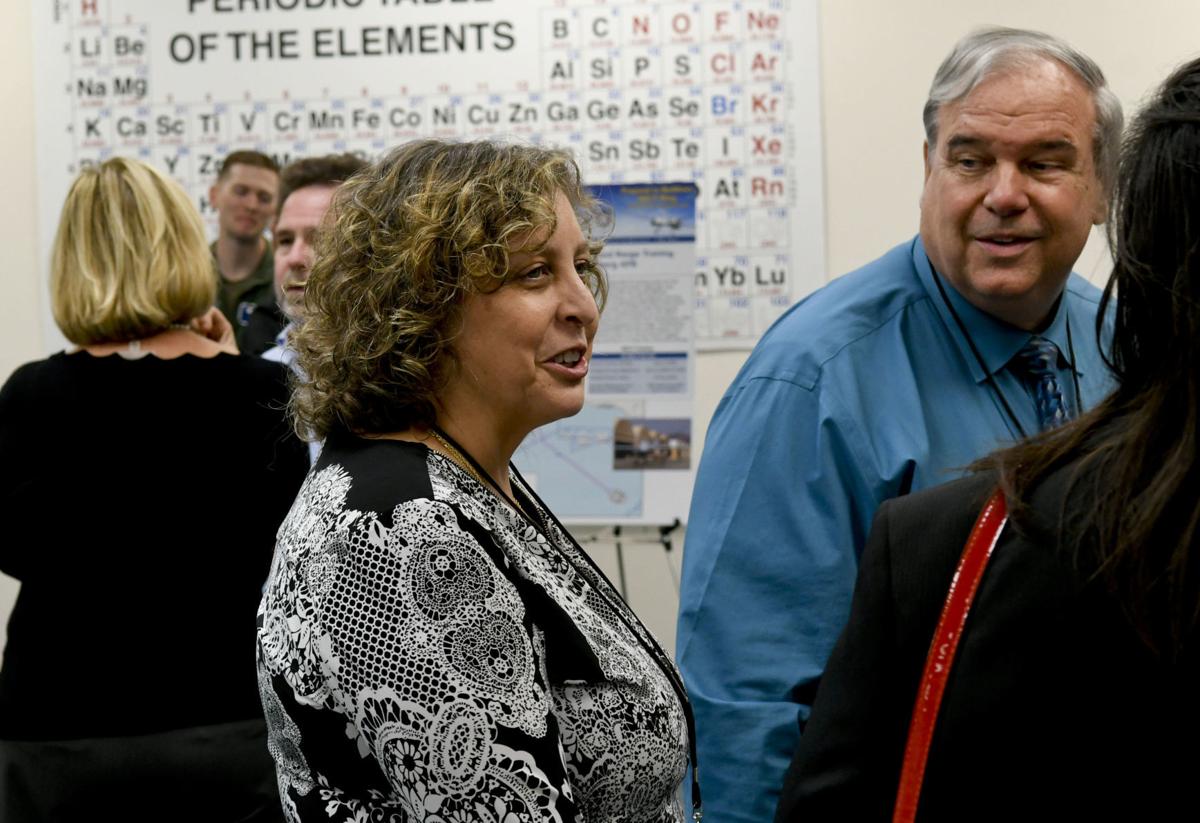 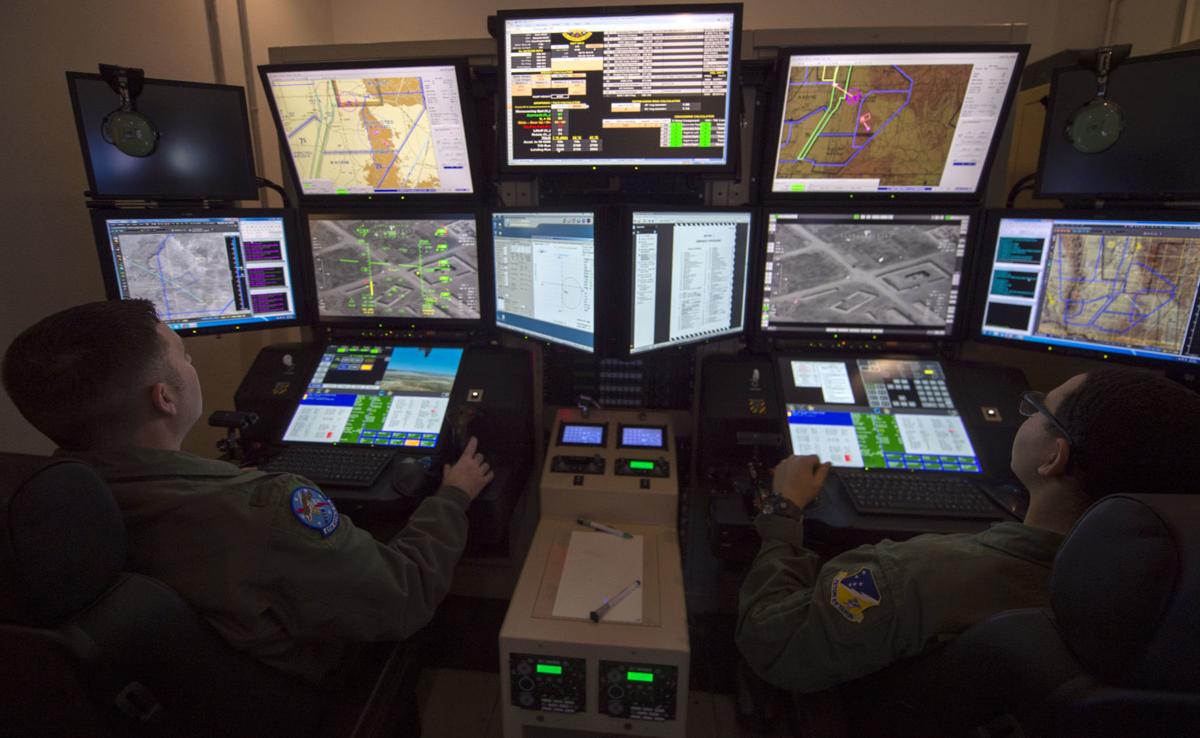 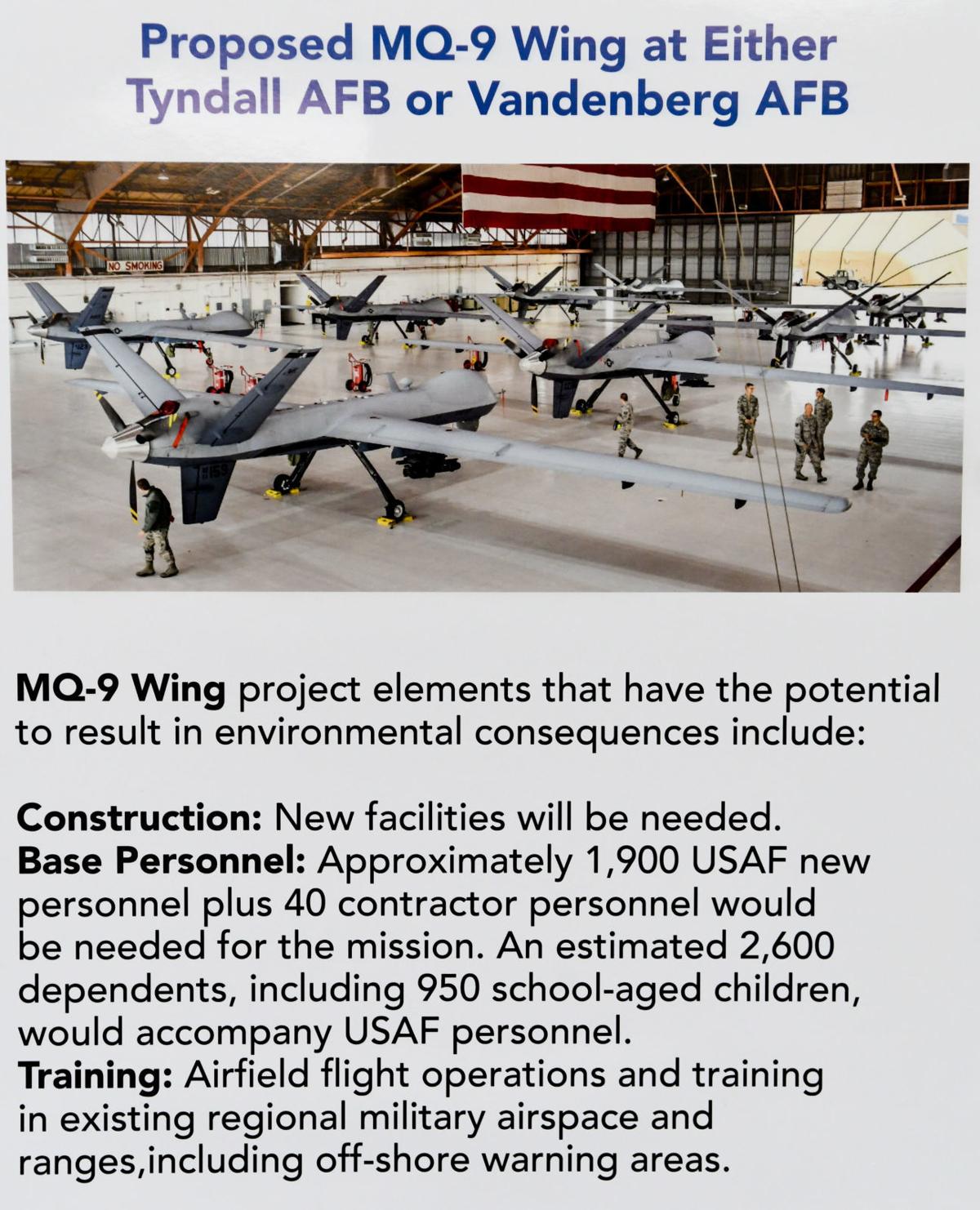 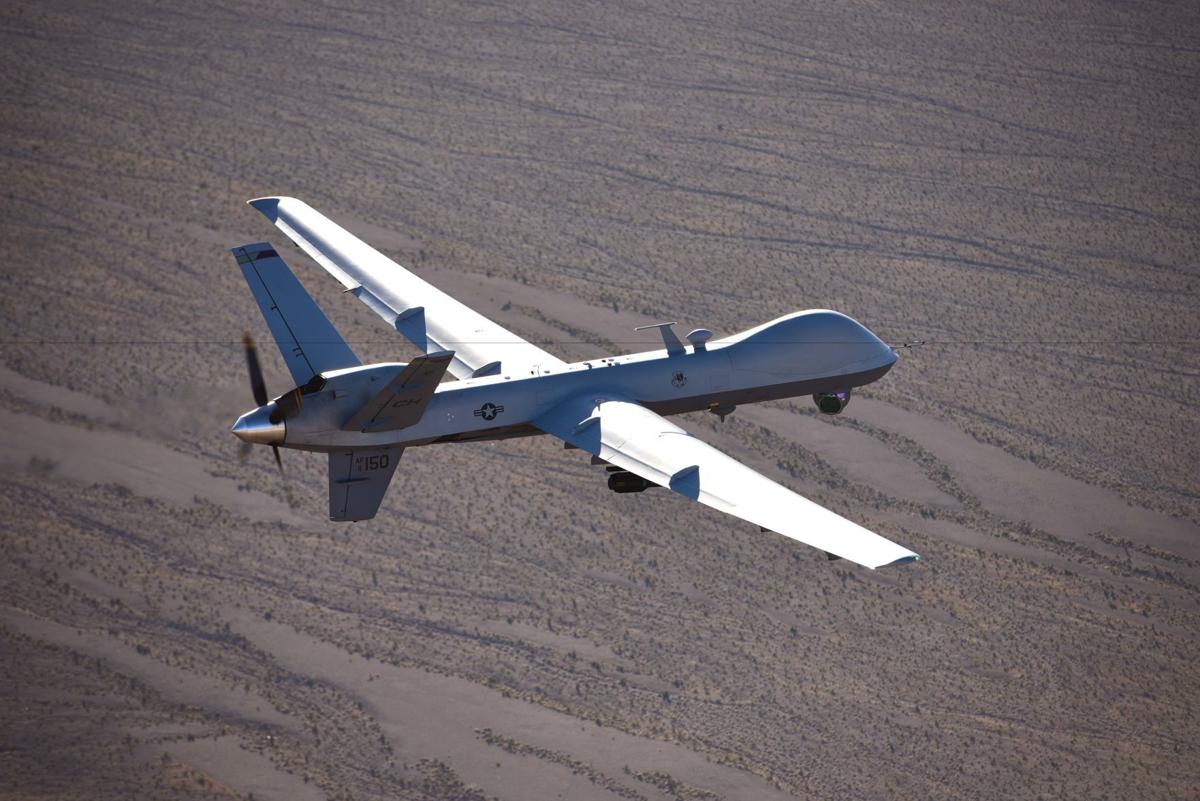 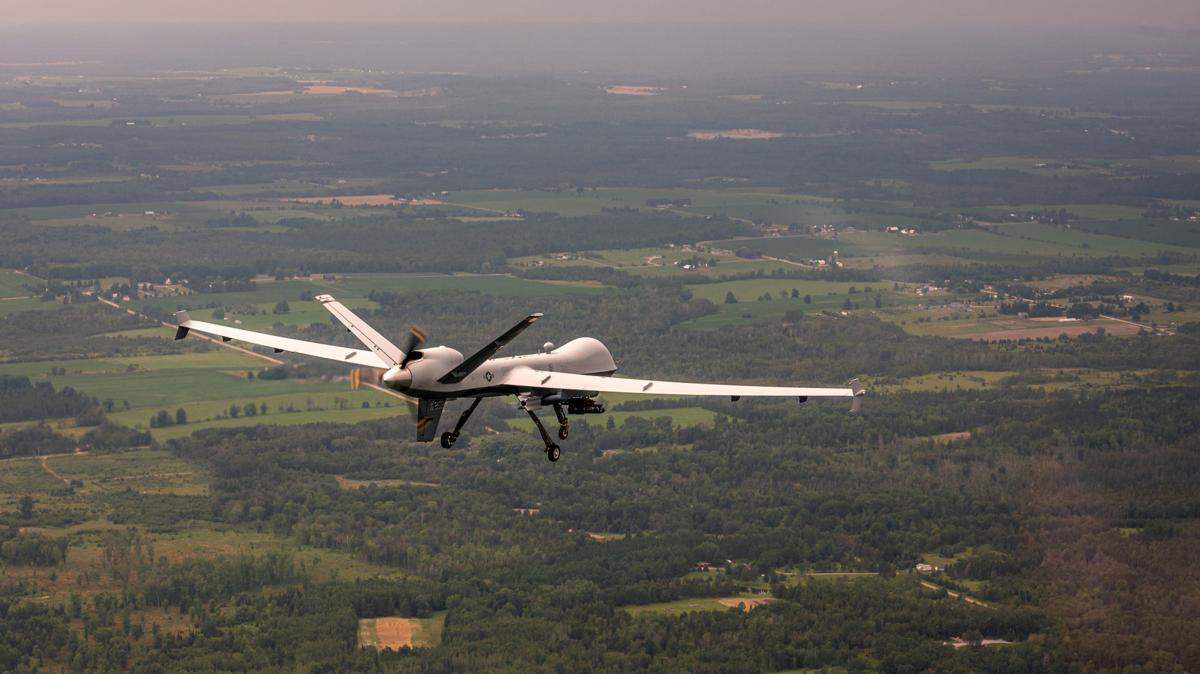 Less than a month after it was revealed Vandenberg Air Force Base was under consideration to host a new remotely piloted aircraft wing, Air Force leaders converged on the Lompoc Valley to share information about the significant construction and additional personnel such a wing would require.

Several officials tasked with assessing the environmental impacts of establishing the new wing gathered at Hancock College’s Lompoc Valley campus Dec. 12 for a scoping meeting to field concerns from the public and share information about the proposal.

In November, it was affirmed that VAFB and Tyndall Air Force Base in Florida were being considered to house an MQ-9 Remotely Piloted Aircraft Wing.

The new wing would provide the space and facilities for pilots of the MQ-9 Reaper, which are commonly referred to as drones, to train and operate the aircraft, which could be physically located in various parts of the world.

“It’s pretty exciting to be able to look at bringing a brand-new mission here,” said Cynthia Pettit, program manager for the environmental assessments through the Air Force Civil Engineering Center.

Vandenberg Air Force Base under consideration for military drone wing

The Air Force has announced its intent to prepare environmental documents related to the establishment of an MQ-9 Remotely Piloted Aircraft Operational Wing at either Vandenberg Air Force Base or Tyndall Air Force Base in Florida. The MQ-9 Remotely Piloted Aircraft is more commonly known as the Reaper and is billed as the first hunter-killer unmanned aerial vehicle designed for long-endurance, high-altitude surveillance.

The establishment, or "beddown," of the new wing, according to the Air Force, would be to fulfill the MQ-9 operational requirements while also diversifying operation locations so not all MQ-9 assets are based at one site.

Having everything in one place could disrupt operations in the event of an emergency, like a hurricane or other extreme weather event, according to officials.

VAFB and Tyndall Air Force Base were selected by the Air Force as the top two candidates for the new wing from an initial field of 54 installations.

Pettit noted that both bases are being assessed equally.

She said the environmental impact statement that is ultimately produced will provide “apples to apples” comparisons for the secretary of the Air Force to review before ultimately deciding which base to select for the new wing.

The first draft of that environmental report is expected by summer 2020, Pettit said. The scoping meetings are being held to solicit comments from community members around both installations.

The wing would require significant build-out regardless of which base is ultimately chosen.

The Air Force reported approximately 1,900 new Air Force personnel, plus 40 contract workers, would be needed for the new mission.

Gerald Evans, an Air Force retiree who now works as a civilian in the Air Combat Command basing office, said both bases under consideration offer such perks as restricted airspace for training and proximity to large bodies of water that could allow for both land and water operations.

“That’s to keep the guys current,” Evans said. “It’s like if you never drive your car, you get rusty and you don’t signal and then you get pulled over for not using your turn signal. So these guys, if they’re not flying something downrange, a mission requiring that stuff, then they fly missions here in the States to remain current and so their skills stay where they need them to be.”

The MQ-9 Reapers are about 36 feet long and 12.5 feet high with a wingspan of about 66 feet, making them similar in length and height to a Cessna 208 Caravan single-engine turboprop.

The Reapers can reach 50,000 feet and have a mission duration of about 12 hours. They are operated remotely by a two-person crew consisting of a pilot and a sensor operator.

Air Force Maj. James Lewis, also with Air Combat Command, pointed out the Air Force prefers to call the vehicles remotely piloted aircraft rather than drones, largely because drones are considered to be “more autonomous.”

“There’s a [person] always in the loop,” he said of the MQ-9 Reapers. “Yes, this aircraft is being operated somewhere else and there’s not a person on board, but we are controlling the aircraft remotely, either from a ground control somewhere in the United States or directly at the airfield line of sight.”

He noted the ground control stations are referred to in the Air Force as cockpits “to make it more closely related to manned flight.”

Added Evans: “The bottom line is that when [the pilot] sits there at the console, it’s no different than him sitting in the cockpit of an airplane.”

The environmental analysis that is underway also will include the impacts of a separate F-35A Wing that is being proposed just for Tyndall Air Force Base. That proposal will have no bearing on the MQ-9 Wing, according to Air Force officials.

Col. Anthony Mastalir, the commander of the 30th Space Wing at Vandenberg Air Force Base, recently sat down with members of the media to talk about the new U.S. Space Command; the proposed U.S. Space Force; the future of launches at VAFB and how the base is preparing for a predicted rise in commercial space travel; his desire to get in a parade; and, of course, the future of plover protection efforts.

Anyone who would like to submit comments during the public scoping period to determine what the environmental impact statement should address can do so online at www.F-35WingandMQ-9WingEIS.com.

The Air Force has asked that all comments be submitted prior to Dec. 24.

A decision on which base is selected for the MQ-9 wing isn’t expected until after the environmental studies are completed next year.

Lewis, who attended a scoping meeting this month in Florida that was similar to the one last week at Hancock, said he’s had a blast introducing and discussing the proposals.

“I’m enjoying interacting with the community,” he said.

2020 is here, and wow we are already almost through January?!? In this collection reporter Willis Jacobson chooses the top five stories that he wrote in 2019.  Follow more of his work on LompocRecord.com, and sign up for a News+ membership to support the work of local journalists in your community.

A September march and rally illustrated the pain of a community reeling from violence.

Major changes at Lompoc's Surf Beach could include shift in plover counts, construction of boardwalk

Free Surf Beach? Major changes could be in store for Lompoc's coastline.

A new group makes a renewed push for a space center complex in the Lompoc Valley.

The 14th Air Force, which is headquartered at Vandenberg Air Force Base, has been officially redesignated as Space Operations Command in support of the U.S. Space Force that was established this month by President Donald Trump.