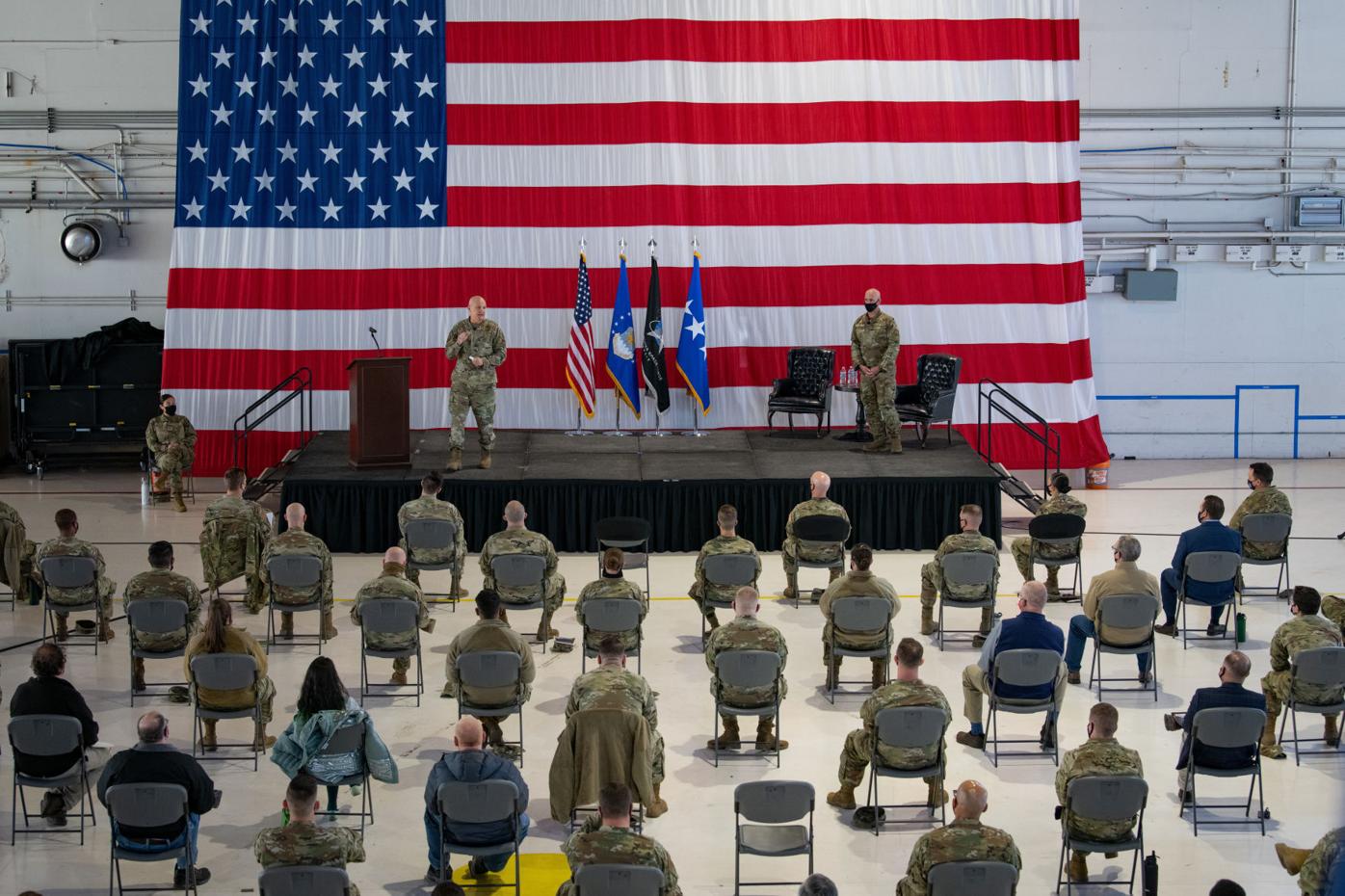 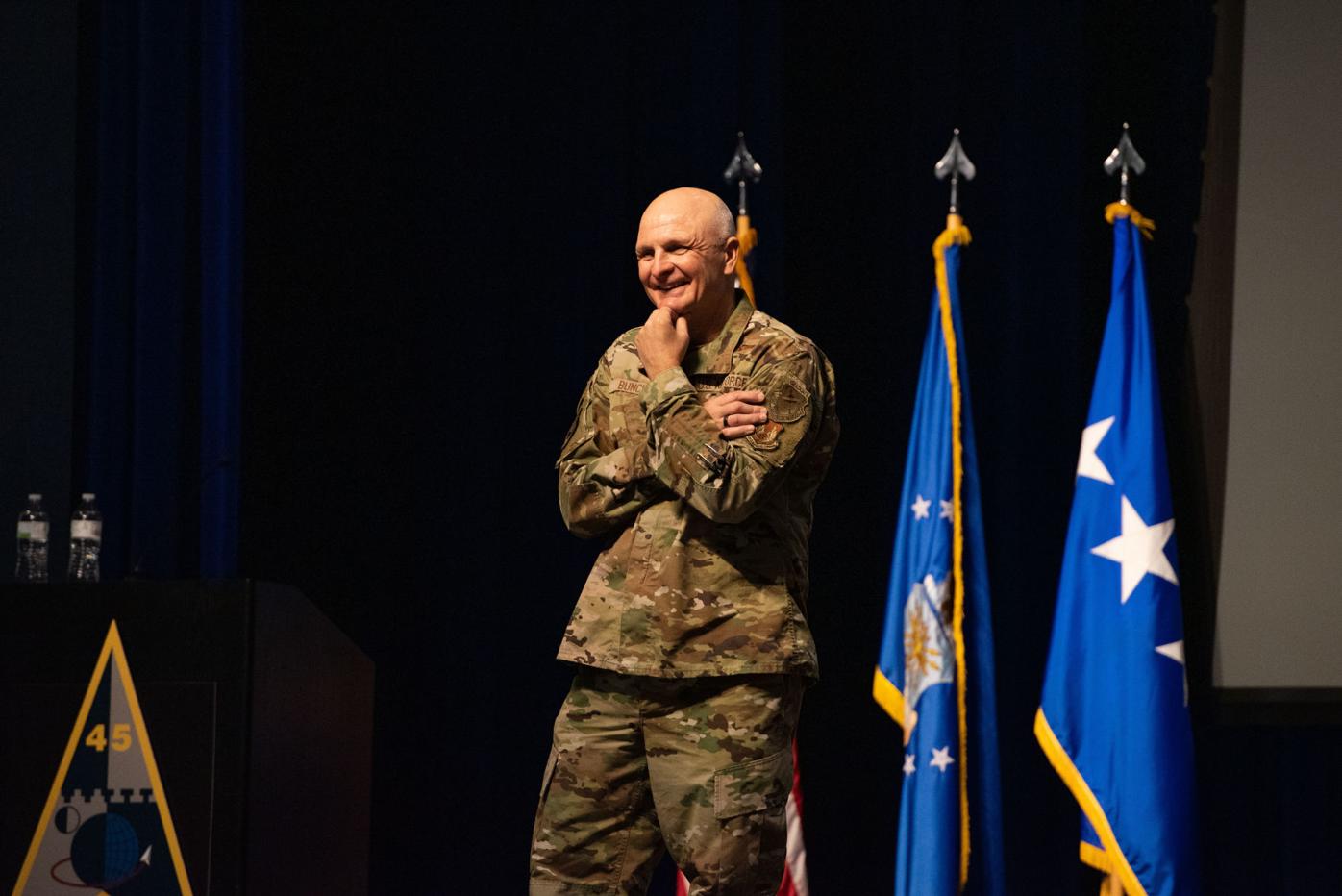 The trip was an opportunity for the team to talk directly to Airmen about what it means for AFMC to be the servicing major command to U.S. Space Force and answer questions related to how it would impact their career and personal growth as they serve under the newest Department of Defense organization.

“The focus of this new servicing structure is to make sure we’re taking care of the Airmen,” said Gen. Arnold W. Bunch, Jr., AFMC Commander, during an all-call at Peterson Space Force Base, Oct. 27. “We want to make sure we’re doing the right things to develop you and make sure that you’re successful.”

Bunch held all-calls with Airmen and Civilians in base operating support roles at Vandenberg Space Force Base, Los Angeles SFB, Peterson-Schriever Garrison, Buckley SFB and Patrick SFB throughout the course of the week. He also met with Space Force leaders to answer questions related to the servicing MAJCOM role and identify any potential current or emerging issues.

“Our focus is on you. We’re going to look out for you and represent you,” said Bunch. “We’re plowing new ground, and there is a 0% chance that we got this 100% right now. We’re working through the issues, and we are asking for your help.”

There is no doctrinal guidance for the servicing MAJCOM role, as it is the most significant change to Air Force structure since the service was established in 1947, said Bunch. So far, 326 tasks are identified that will be performed by AFMC as the servicing organization to the Space Force, spanning areas that include manpower management, developmental team representation, awards and special trophies, enlisted commissioning programs, STEP promotions and civilian hiring policy and oversight.

AFMC recently declared initial operational capability for this new role which impacts approximately 8,000 Airmen assigned to Space Force installations. The U.S Space Force derives almost all its support from the Air Force, including infrastructure, logistics, security, medical services, and a host of other common capabilities.

The servicing MAJCOM role ensures that Airmen working in these areas receive the same developmental opportunities and functional career support as their peers assigned to Air Force organizations.

While AFMC has declared IOC, it continues to develop and refine policies related to awards and trophies, Civilian Developmental Education, force presentation and nominative assignments. Department of the Air Force Instructions are in the process of being revised to encompass the changes. Nearly 40% of functional tasks have completed transfer from the Space Force to AFMC, with full transition of others on the horizon.

“We in AFMC are committed to this partnership. Together we can make sure that our Space Force is successful and you are successful,” said Bunch.

A “USAF support to USSF handbook” was created to outline what remains unchanged, as well as key areas where support processes are evolving to fit the new service-to-service relationship. Airmen and Guardians can view the handbook on the Space Operations Command portal page at: https://go.usa.gov/xeaFD.