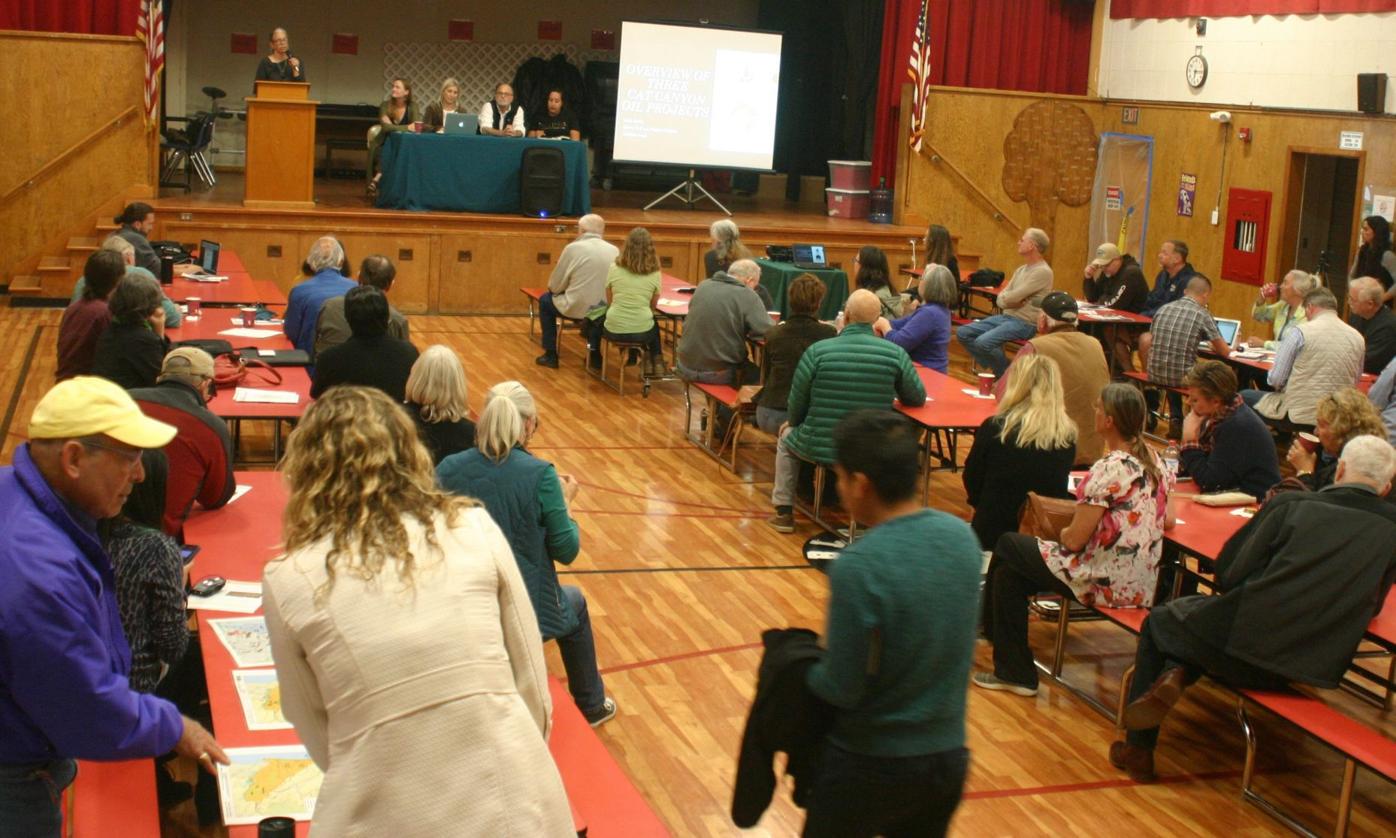 About 50 people gather Oct. 23 in the multipurpose room at Benjamin Foxen Elementary School to hear a panel discuss their opposition to three oil development projects proposed for Cat Canyon. 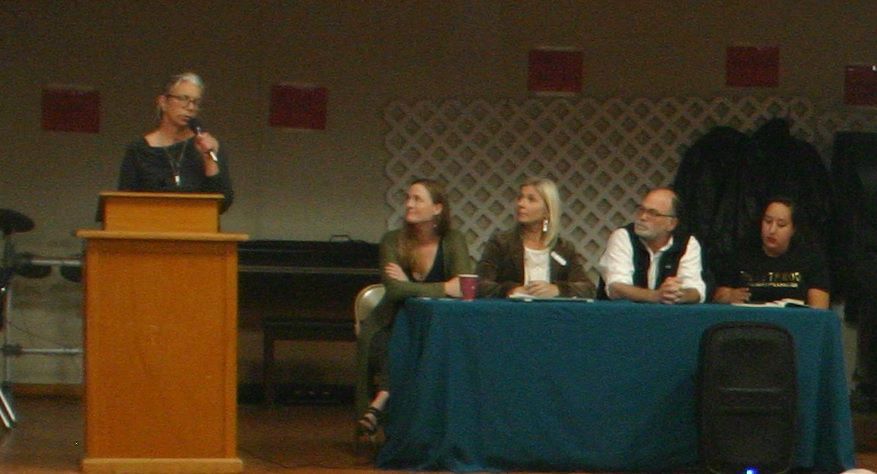 About 50 people gather Oct. 23 in the multipurpose room at Benjamin Foxen Elementary School to hear a panel discuss their opposition to three oil development projects proposed for Cat Canyon.

About 50 people gathered recently to hear a panel of environmental organization representatives and a physician talk about the risks posed by a trio of oil developments proposed in the Cat Canyon area.

Rebecca August of Safe Energy Now, who moderated the meeting, said the goal was to provide the community with the facts so they can make informed decisions about the three projects.

But some of the panelists urged attendees to be active and involved and to tell county officials they oppose the projects.

August said no oil company representatives were invited to participate because they’ve already been disseminating their information about their projects.

“There are all kinds of ways to meet the oil companies to find out about what they’re doing,” August told the audience. “And it’s important that you find out.”

She later added the oil companies "also had a forum and would not let anyone from (Environmental Defense Center), Sierra Club or anyone in the environmental community speak."

She said information presented at the forum came from "experts who have been studying this for years."

“This is coming from people who care about the environment, our health and the air,” August said. “If the projects go through, they don’t benefit. They don’t make any money from it. … They’re all honest and fair and just presenting what they know.”

The three projects in question, proposed by ERG Operating Co., Aera Energy LLC and PetroRock LLC, adjoin each other and stretch from near Sisquoc through Cat Canyon to Los Alamos, with ERG’s covering the largest area and PetroRock’s the smallest.

“What we want to emphasize is how large these projects are,” said Katie Davis of the Los Padres Chapter of the Sierra Club.

Davis said the projects combined would add 760 new wells that would triple Santa Barbara County’s oil production, and all three will use enhanced oil recovery systems — either cyclic steam injection, where steam is forced down into a well and oil is extracted from the same well, or steam flooding, where steam is forced down one well and the oil is extracted from another.

“All these have large natural gas pipelines associated with the project,” she said, because they require steam to be heated to 500 degrees to extract the thick oil that remains in the field.

The natural gas will be delivered through 8-inch pipelines, some of which lie alongside highways 101 and 135, Davis said.

Depletion of groundwater supplies was among the major potential impacts of the projects, panelists said.

“They say they don’t use fresh water for steaming,” said Alicia Roessler, a staff attorney for the Environmental Defense Center. “That may be true. But they use a significant amount for drilling.”

ERG is the only one of the three to have released a draft environmental impact report, and panelists said it lacked a lot of information, including how much water that project would use.

But Davis said the three projects would use 7 million to 8 million gallons of fresh water annually.

A related issue is the potential for groundwater contamination, the panelists said.

“This area relies on groundwater for drinking water,” Davis said. “They all expect spills. It’s just a matter of how big they are. ERG estimates 18 spills over 10 years.”

Roessler said groundwater can be contaminated by oil in a number of ways, including while drilling through the aquifer, by casing failure and upwelling of oil from steam overpressure.

She also said the drilling would produce a significant amount of toxic wastewater.

“The most economical way to dispose of it is to inject it back into the ground,” she said

Panelists said the projects would generate hundreds of additional truck trips daily on local roads, not only increasing the risk for other drivers but, also, increasing the amount of pollution in the air.

“They actually have to truck light oil in to mix with the heavy oil, then truck it out again,” Davis said.

Kevin Beckmen, a former emergency room physician at Marian Regional Medical Center, outlined the health effects of the chemicals used in oil production, including benzene, toluene, xylene and others.

Beckmen said the chemicals can get into cell membranes, causing them to explode, and attach to hormone receptors, affecting the production of estrogen, testosterone, cortisone, progesterone and other hormones.

“Benzene is a carcinogen, and there is no safe level of exposure,” he said. “Benzene gets into DNA and rips it apart. When the DNA tries to fix itself, it creates a cancer cell.”

Leukemia, lymphoma, bladder and prostate are among the cancers that result.

Effects of the chemicals on unborn children can range from increases in heart and neural defects to low birth weights.

Particulate matter produced by the diesel engines can go through the lungs and into the body, where it causes heart and lung problems as well as dementia, he said.

Panelists also listed habitat damage among the potential impacts from the projects.

“They say they’re going to have a nature reserve and plant new oaks,” she said.

Roessler added that 1,500 oak trees would be lost.

They said although new oaks would be planted, they couldn’t survive like the mature oaks could and would require constant watering.

Ana Rosa Rizo-Centino of Food & Water Watch made perhaps the strongest plea for residents to oppose the projects.

“Your children and grandchildren will be affected by these projects,” Rizo-Centino said. “Oil companies seem to pick the most low-income communities to build their biggest projects because they think they can buy us off.

“I want to make a call to action to everyone here tonight,” she said, adding no amount of money is worth the health and future of everyone’s children.

“Don’t be intimidated by these companies,” she said. “They have millions of dollars; we have people power.”

Panelists said residents should make their voices heard when the projects come before the County Planning Commission.

“I would encourage everyone to become engaged, become involved,” Roessler said. “Be informed, be educated, participate. You do have a voice.”

Water Board to discuss requirement options for next agricultural order

'Growing Together': Fourth Latino Farmer conference to take root at Radisson on Nov. 8

On the Central Coast and across California, Latinos are a big part of the state's billion-do…

Environmental groups and Sen. Dianne Feinstein are raising concerns about the appointment of…

As an environmental impact report is expected to be released later this month, Aera Energy i…