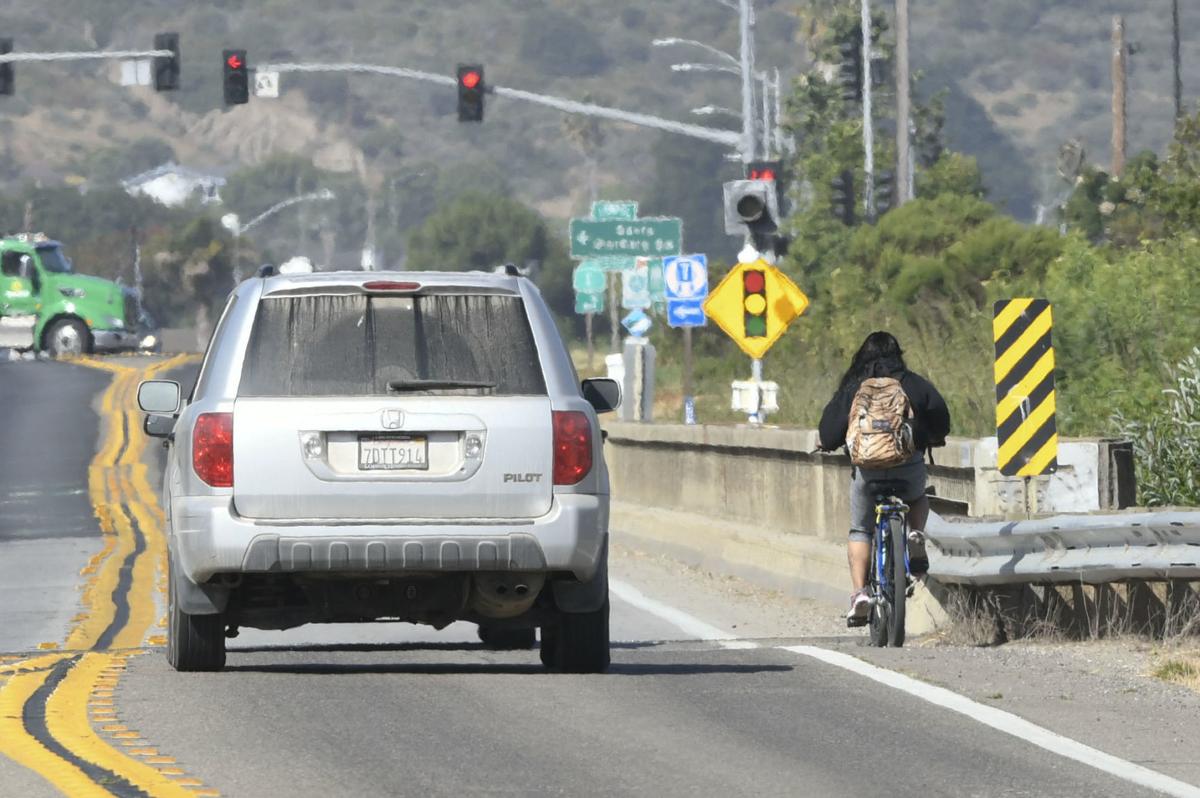 A cyclist rides on the Highway 246 bridge east of Lompoc on Tuesday. Officials hope to build a pedestrian/bike bridge over the Santa Ynez River in the area. 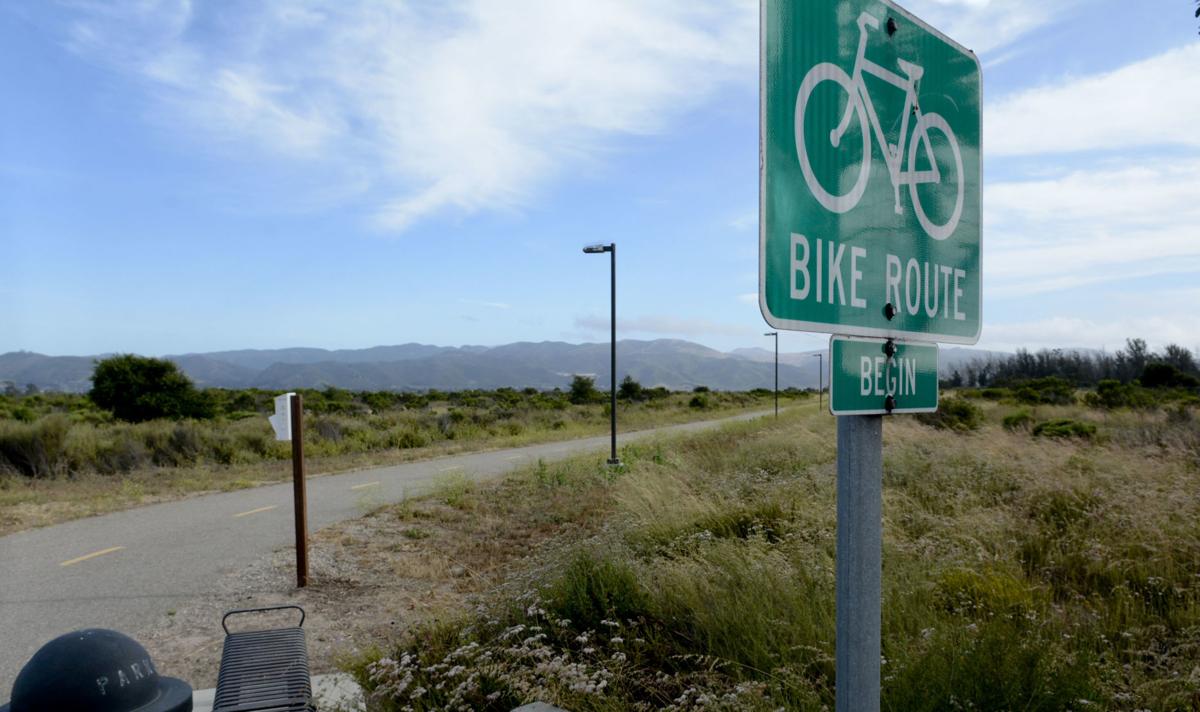 Officials hope to connect the bike route from Lompoc to Hancock College's Lompoc Valley Center with a bike/pedestrian path to Vandenberg Village.

Promoting Lompoc as a destination for cycling tourism and finding ways to connect the city’s network of bike paths with other popular Lompoc Valley locales — such as Surf Beach — were among updates made to a Pedestrian and Bicycle Master Plan approved this month by the Lompoc City Council.

The governing body voted 5-0 on June 3 to approve the new plan, which sought to assess the existing cycling and pedestrian networks, identify community needs and prioritize future improvements.

Several local stakeholders — such as Lompoc Unified School District and the Healthy Lompoc Coalition — were involved in the development of the plan, which also took into account results from community surveys.

By approving the plan, which serves as an update to the city’s 2008 Bicycle Transportation Plan, the City Council ensured that the city will be eligible for future grant funding that it otherwise would not have.

The 88-page document, which is available online at https://www.cityoflompoc.com/home/showdocument?id=29173, also will help city staff plan for and prioritize projects as the city updates and implements its 2030 General Plan.

Some of the projects described in the plan, which is nonbinding and does not guarantee that any project will be pursued, have been discussed or suggested by various community groups going back several years.

One of the proposals is for the city to explore having a bridge constructed for pedestrians and bicyclists to cross the Santa Ynez River on Highway 246 east of the city limits. Currently, the Robinson Bridge, which is for vehicular traffic, has no shoulders for cyclists or pedestrians, which creates a dangerous situation for those walking or biking to the Bridgehouse Shelter or River Park.

The plan also calls for additions to the city’s current bike network, which has 5.6 miles of paved off-street paths, 20.4 miles of on-street bike lanes and 2.1 miles of shared-use bike routes.

City staff is expected to further assess the viability of those proposals. Those that are deemed beneficial to the city could then be added to the 2030 General Plan and potentially move forward from there.

Although many stakeholders expressed support for the plan, not everyone was on board.

Robert Petty, a 42-year Lompoc resident and past president of the Lompoc Valley Bicycle Club, submitted a letter to the city on May 22, during an 11-day public review period, in which he took issue with several aspects of the plan and its development process.

The Lompoc City Council this month directed staff to prepare a Community Benefits Agreement that the city will look to enter into with Strauss Wind, LLC, the developer behind the 100-megawatt Strauss Wind Energy project that is planned for the ridgetops near the end of San Miguelito Road. The pact is likely to include a substantial payment to the city, if certain conditions are met.

Petty wrote he would have liked a longer review period and suggested that the city didn’t do enough outreach to solicit input from the community.

The plan notes that the city received 468 responses to its 20-question community survey that was made available last year. That total accounts for about 1% of Lompoc’s population.

Petty said he felt that small sample size was “from a statistical point of view, almost useless.”

“And so many important decisions in this plan are based on these exceedingly small numbers,” he wrote.

When asked which destinations need the most improvements to make walking safer, 33% of respondents listed schools, while 26% listed parks and 22% listed shopping centers. The results were similar when asked about improving bike safety, with 32% listing schools, 26% citing shopping centers and 24% noting parks.

The plan lists 88 projects, ranging in complexity, for improving bike and pedestrian trails, as well as the closest school to each project. Many of the projects involve infilling sidewalks and adding flashing beacons in crosswalks to improve safety around campuses.

The overall estimated cost for all the projects is $46.6 million. That includes nearly $33 million in improvements to bike paths and lanes.

Heather Bedford and Halle Dyer, a mother-daughter duo with deep roots in the Lompoc business community, purchased South Side Coffee Co., located at 105 South H St., this month from original owner Julie Biolley and Stacy Lowthorp, who had co-owned the business with Biolley since 2013.

The cost of developing the plan was almost entirely covered by Transportation Development Act grant funds from the Santa Barbara County Association of Governments, or SBCAG. Those grant funds were set to expire at the end of June, which is why the city moved to have the plan approved before then.

Michael Becker, SBCAG’s director of planning, submitted a letter to the city on May 21 in which he expressed support for the plan.

“SBCAG values the benefits of a safe, convenient, and complete pedestrian and bicycle transportation system in all areas within the Santa Barbara County region,” read a portion of his letter.

“This plan aligns with SBCAG’s Regional Active Transportation Plan (2015) with a vision for improving the bicycle and pedestrian network countywide," it concluded. "SBCAG supports efforts of the city of Lompoc to adopt and implement its Pedestrian and Bicycle Master Plan, which will improve transportation for the community.”

A resource page developed by the city regarding the plan can be accessed at https://www.cityoflompoc.com/government/departments/public-works/pedestrian-and-bicycle-master-plan.

The contract approved by the Lompoc City Council, which did not discuss the issue, calls for the city to pay the county nearly $335,000 to manage the shelter and provide other animal services through June 2021. That payment marks a 2.5% increase over the current agreement between the city and county.

The LUSD Board of Education on Tuesday night approved the hire of Mark Swanitz, a former principal at Santa Ynez Valley Union High School, as principal at Cabrillo High School. That move came after the board voted on May 12 to approve the promotion of Celeste Pico from assistant principal to principal at Lompoc High School.

'Reinventing aerospace': Startup looks to launch its 3D printed rockets out of Vandenberg Air Force Base

Relativity Space, which bills itself as the first company to utilize 3D printing, robotics and artificial intelligence to reinvent aerospace manufacturing, has reached an agreement with the U.S. Air Force to assess the viability of conducting launch operations out of Vandenberg Air Force Base. The company announced the move Wednesday.

A cyclist rides on the Highway 246 bridge east of Lompoc on Tuesday. Officials hope to build a pedestrian/bike bridge over the Santa Ynez River in the area.

Officials hope to connect the bike route from Lompoc to Hancock College's Lompoc Valley Center with a bike/pedestrian path to Vandenberg Village. 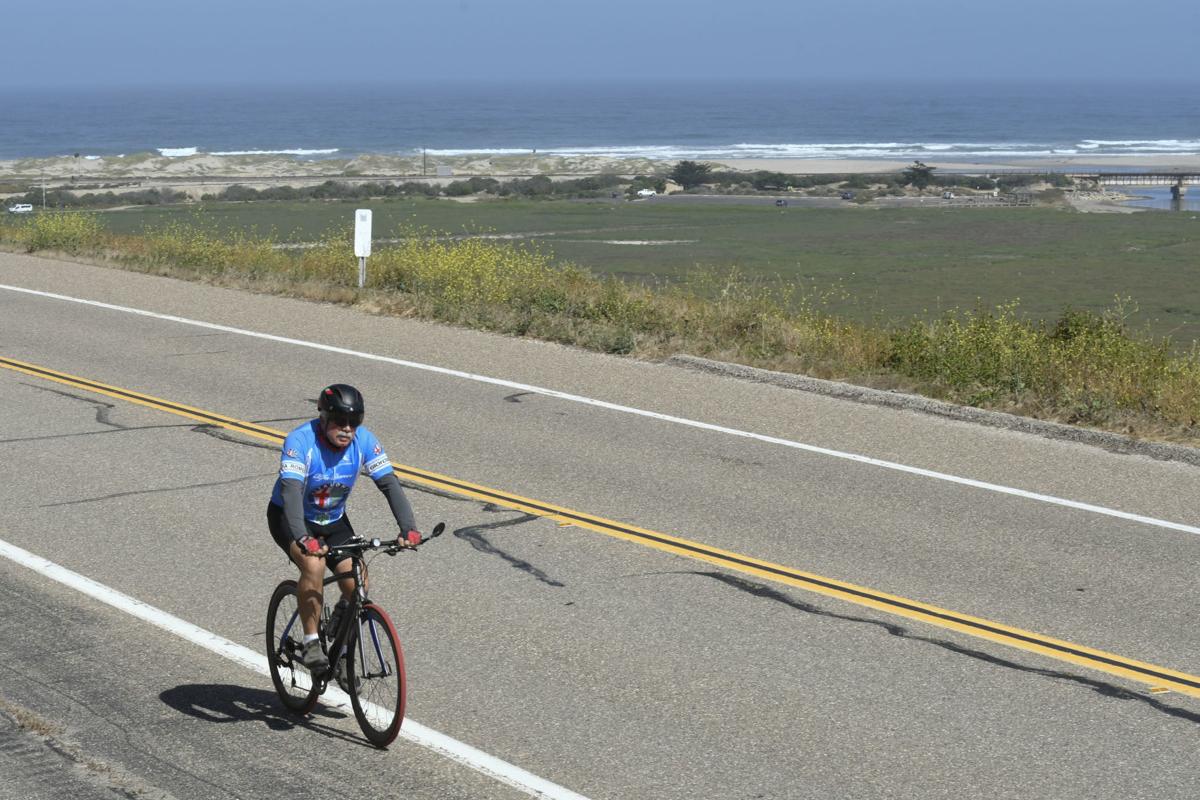