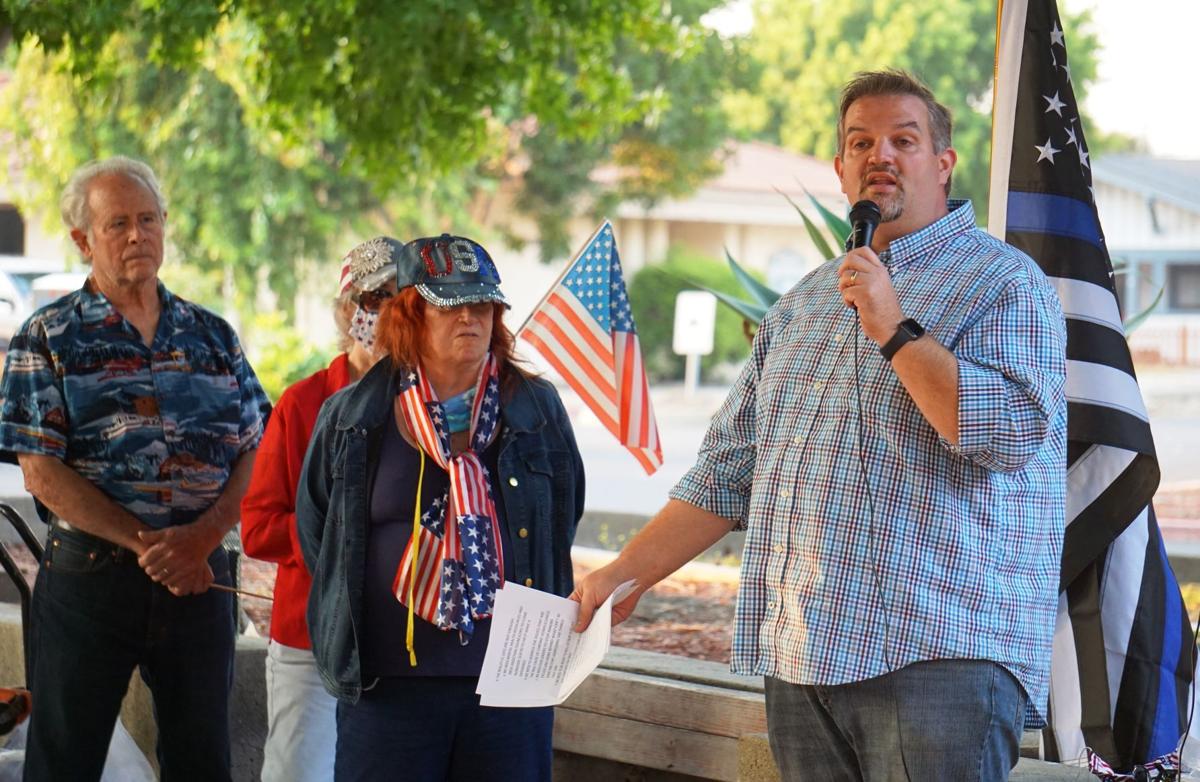 Jason Byard, right, speaks during a "peace rally" he organized outside Lompoc City Hall on Tuesday evening to send a message to city leaders that residents are fed up with the violence taking place in the city. About two dozen people participated in the rally, which also served as a show of support for the Lompoc Police Department. 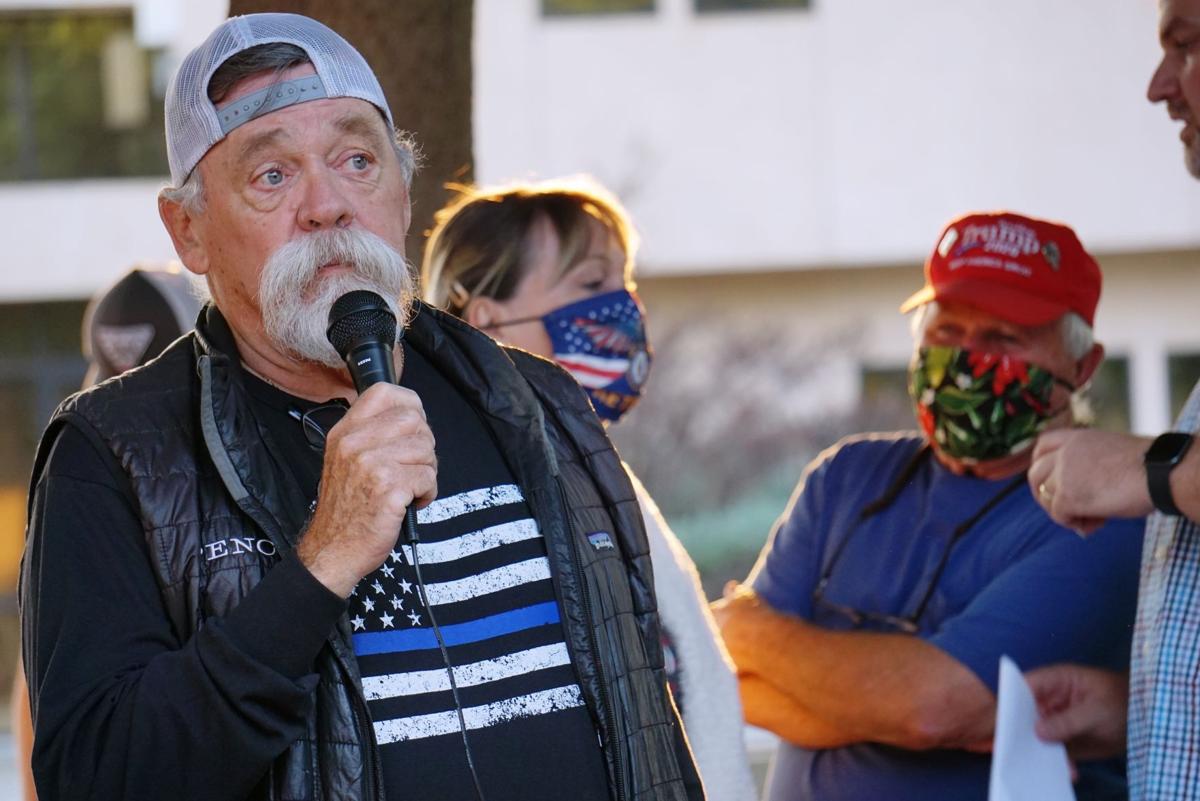 Lompoc resident Philip Gallanders speaks to the crowd during a "peace rally" held outside City Hall on Tuesday evening. The rally served as a show of support for the Lompoc Police Department, as attendees called for more resources for police as the city deals with a rise in violent crime. 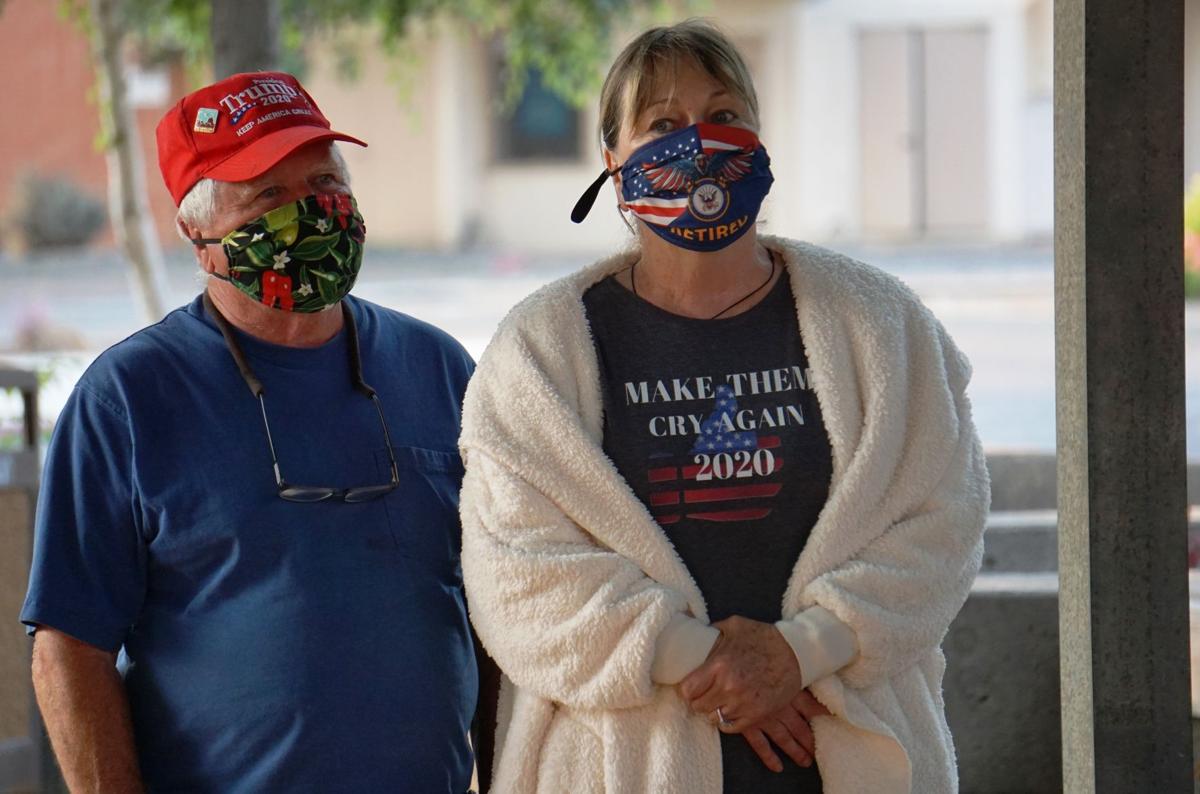 Two attendees listen to speakers during Tuesday evening's "peace rally" outside Lompoc City Hall. About two dozen people participated in the rally, which served to let city leaders know that residents are fed up with violent crime in the city, as well as a public show of support for the Lompoc Police Department.

While Lompoc resident Jason Byard acknowledged he has been frustrated for years by what he perceives as a lack of support for public safety by city leaders, he said he reached his tipping point this month after a 16-year-old was killed in what police described as a gang-related shooting.

Byard said he shared some of his concerns with fellow community members in the days after that Aug. 7 shooting. He was taken aback, he said, when some people simply shrugged off the homicide — which was the 11th in Lompoc since the start of 2019 — and used the victim’s alleged gang ties to imply that he was at fault for his violent demise.

“That’s not acceptable,” Byard said of that rationalization. “He was [16] years old. In a town where people were willing to march for Black lives and do all that kind of stuff, to have that many people in this city say, ‘He didn’t really matter; he was a gang-banger,’ [is upsetting].”

Motivated by a desire to prevent similar incidents in the future, Byard organized a "peace rally" in the courtyard outside City Hall on Tuesday evening. The event, which drew a couple dozen attendees, began around the same time as that night’s City Council meeting, which was closed to the public due to the COVID-19 pandemic.

Its aim was to send a message to city leaders that community members were fed up with the ongoing violent crime, while also serving as a public show of support for the Lompoc Police Department.

“Yeah, the kid might’ve made some poor choices in his life, but he was still just [16] years old,” Byard said of Pablo Sixto, who was killed in the 700 block of North E Street. “Where was our community to bring the support that kid needed in his life, whether that was a mentor figure, whether it was better opportunity or better education? Whatever the case is, there’s so many pieces to that puzzle. But the first place that starts is with our police department.”

Indeed, several of the rally’s attendees spoke, carried signage, or wore clothing in support of law enforcement and/or President Donald Trump, who has attempted to make law and order his calling card as he seeks re-election this year.

Byard delivered his comments to the crowd while standing in front of a large “Thin Blue Line” flag, which is typically associated with support for law enforcement, but he stressed the rally wasn’t political.

“It’s not about Republicans or Democrats or conservatives or ‘Thin Blue Line’ or ‘Black Lives Matter’ or any of that,” Byard said. “We all live here. This is our town, our community, and this affects all of us equally. It’s time for us to stand united and say, ‘Enough, we’ve had it,’ and make [city leaders] do their jobs and stop making excuses.”

The recent rise in violence in Lompoc was first thrust into the spotlight in 2019, a year in which the city experienced seven reported homicides. That was an unusually high total, historically, for the city, but that pace has been maintained as the Lompoc Police Department has reported four murders in 2020, plus several more nonfatal shootings.

While city leaders in the past have pointed to a lack of funding and/or resources as among the main issues hamstringing the police department, that no longer appears to be the case.

During the City Council meeting that took place indoors just feet away from the outdoor rally, Councilman Jim Mosby pointed to some recent City Council budget decisions, like allocating about $800,000 in additional funding for the police department to fill three positions and pay out raises, and directly asked City Manager Jim Throop if there was more that the City Council could do right now in the budget to help address the issues of gangs and violent crime.

“Not right off the top of my head,” Throop said, though he earlier noted that he was planning to begin work on the next draft budget in the coming months and that additional requested resources may be identified within that document.

Still, Byard and many others who participated in Tuesday’s rally said that changes are needed, immediately.

Byard said the No. 1 move that needs to be made by the city is to beef up its police force. If there isn’t enough money to do so right now, he said, then the city should pull money away from other areas and redirect it to the police. Byard noted that regular citizens make those decisions all the time within their personal budgets whenever an emergency arises.

While some have advocated this year for “defunding” the Lompoc Police Department, which would entail redirecting some of its $22.5 million budget to bolster social services, as a way to cut down on instances of racial bias and abuse, Byard said the city of Lompoc needs to take an opposite approach.

“We just need more cops, there’s no getting around that,” he said. “We talk about defunding the police and things like that — we already did that. We defunded our police and we’re seeing the results of that, at three times the national average for murders in this city.”

As for the increasingly louder calls for social justice and racial equity in and around police departments, Byard suggested that was something to review after the gang violence and murder have been stopped.

What you need to know for Thursday, August 20

Lompoc campuses ransacked, burglarized in days leading up to start of school

LUSD officials reported the crimes Sunday, less than 24 hours before the start of the 2020-21 school year, which opened with students taking classes virtually and away from campuses. The vandalism and theft is believed to have occurred at some point between Friday and Sunday at Fillmore and Hapgood elementary schools, both of which appeared to have been ransacked.

The teenager killed in Friday night's shooting was identified as 16-year-old Pablo Sixto, who was shot shortly before 9 p.m. in the 700 block of North E Street in Lompoc, according to police.

The Lompoc Police Department reported that it worked in collaboration with Los Angeles Police Department detectives to arrest 35-year-old Daylan Isaacs, a convicted felon who was allegedly trying to sell the Petty-signed guitar for $10,000 on social media sites in Lompoc.

A Lompoc man on Thursday pleaded not guilty to felony charges related to the gang-related shooting death of a U.S. Army soldier in September 2019, following at least two delayed appearances due to quarantine.

A Santa Maria judge on Wednesday sentenced a Lompoc woman to seven years in state prison for her role in an emotionally-driven stabbing death of a 55-year-old man inside a residence in March 2019.

Francisco Garcia was unintended target of gang-related shooting in Lompoc

A Lompoc man who was killed last week was the unintended target of a gang-related shooting on West Chestnut Avenue, according to a police spokesman.

No arrests were made and police are seeking information from the community regarding the incident, which occurred around 10:11 p.m. in the 1600 block of West Central Avenue. No injuries were reported.

The move was especially welcomed by Greg Ratcliff, the PEG (Public, Education and Government) station manager for the city. In a brief presentation to the governing body, Ratcliff noted that he had overseen a “slow cascade of death” among the equipment utilized by the operation, and he did not sugarcoat the need for upgrades.

Devika Stalling, the director of the Boys and Girls Club in Lompoc, and “Lompoc Vision” publisher Victor Jordan were selected by the Lompoc Chamber is this year's Woman and Man of the Year, respectively. Their combined selections marked the first time that two Black recipients were chosen for the awards in the same year, and that fact — particularly in a year that has been headlined as much by public discussions of racism as the ongoing public health ordeal — was not lost on either of them.

It was due to a high anticipated cost, as well as uncertainty surrounding the vendor that currently provides the Lompoc Police Department with its vehicle dash-cameras, that the City Council decided to table the discussion until at least December, at which time it is expected the city will have a better idea of the costs and possible funding sources for introducing body cameras.

Jason Byard, right, speaks during a "peace rally" he organized outside Lompoc City Hall on Tuesday evening to send a message to city leaders that residents are fed up with the violence taking place in the city. About two dozen people participated in the rally, which also served as a show of support for the Lompoc Police Department.

Lompoc resident Philip Gallanders speaks to the crowd during a "peace rally" held outside City Hall on Tuesday evening. The rally served as a show of support for the Lompoc Police Department, as attendees called for more resources for police as the city deals with a rise in violent crime.

Two attendees listen to speakers during Tuesday evening's "peace rally" outside Lompoc City Hall. About two dozen people participated in the rally, which served to let city leaders know that residents are fed up with violent crime in the city, as well as a public show of support for the Lompoc Police Department.