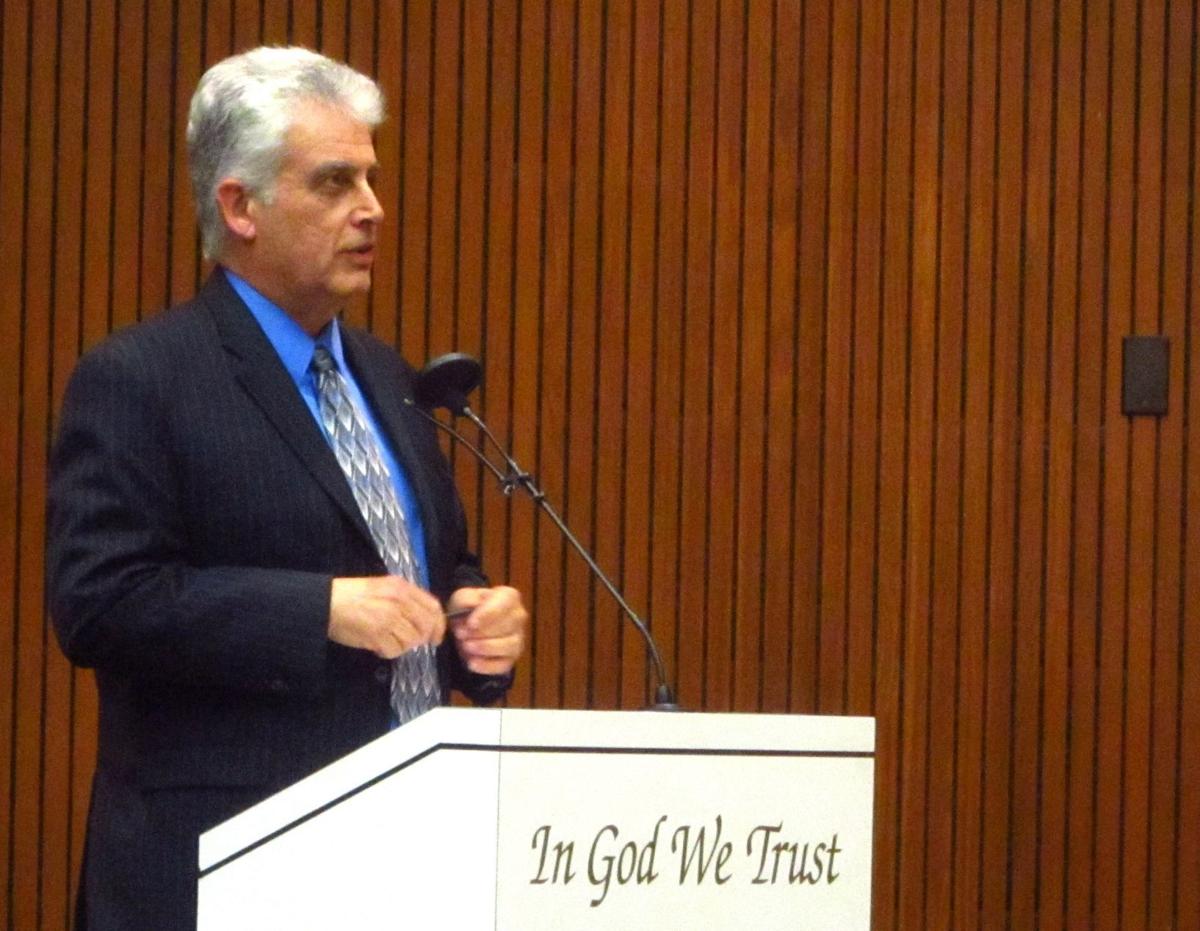 Lompoc City Attorney Joe Pannone discusses how a dance studio could qualify as a youth center during Tuesday night's Lompoc City Council meeting. The topic was key in determining where cannabis businesses can operate in the city. 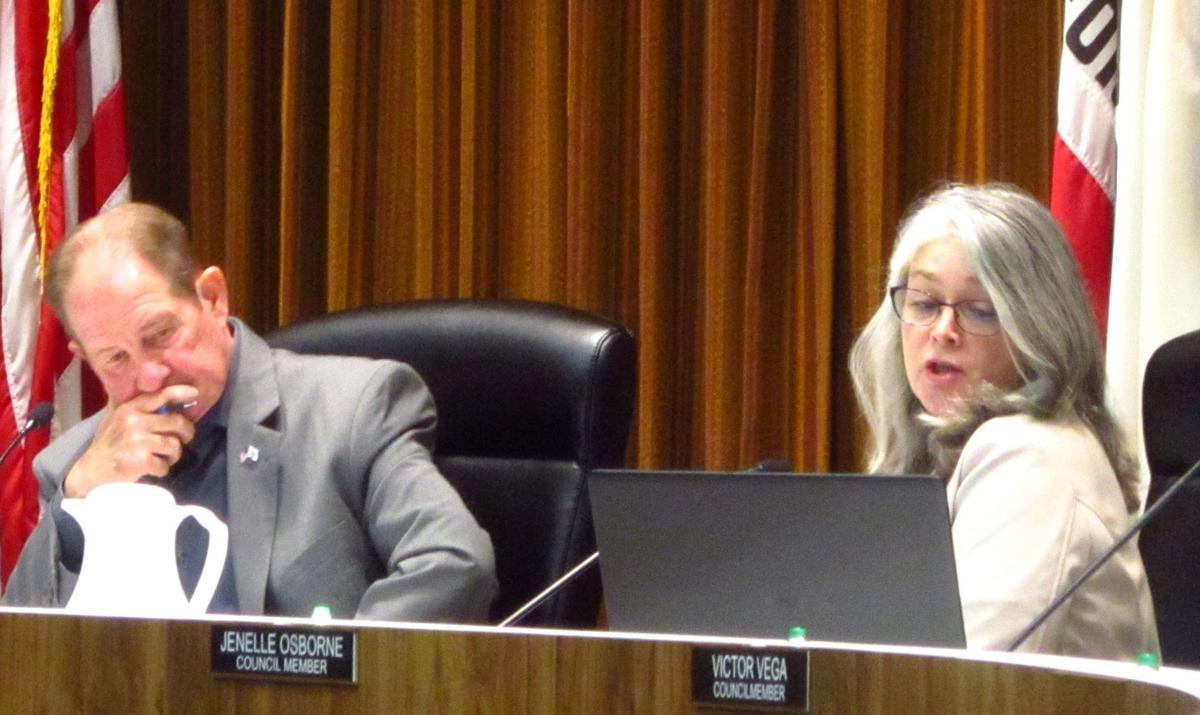 Lompoc Mayor Bob Lingl, left, listens to Councilwoman Jenelle Osborne during a discussion Tuesday night about whether dance studios should qualify as youth centers. The topic was key in determining where cannabis businesses can operate in the city.

In a move that will narrow where potential cannabis businesses can operate within Lompoc city limits, the Lompoc City Council decided Tuesday night to consider dance studios as youth centers.

The classification of the dance studios was critical to the city’s developing legal marijuana market, as retail cannabis operations are prohibited within a 600-foot buffer zone around schools and youth centers. While there has been no dispute about what constitutes a school, there has been debate for two weeks — including an hour of back and forth discussion Tuesday night — about whether dance studios meet the criteria of a youth center, as defined in the state’s Health and Safety Code.

The issue was first raised at the council’s Feb. 20 meeting when the governing body decided to allow commercial cannabis operations in the designated Old Town area. City Attorney Joe Pannone pointed out at that meeting that nearby dance studios could cause exclusion buffers in Old Town, so the council asked that the issue be brought back Tuesday for a full discussion only on the categorization of dance studios.

According to the state, a youth center is “any public or private facility that is primarily used to host recreational or social activities for minors, including, but not limited to, private youth membership organizations or clubs, social service teenage club facilities, video arcades, or similar amusement park facilities.”

There were questions raised at the Feb. 20 meeting about whether dance studios primarily served youth, and also whether they were open for enough hours per week to be affected by cannabis operations.

Pannone said Tuesday that his office had located and contacted five dance studios in the city since the Feb. 20 meeting. According to a staff report he provided, all five of the dance studios — Lompoc School of Dance, Classical Dance School of Ballet, Garcia Dance Studio, The Alley Project, and Boscutti Ballet Theater — reported a clientele that was at least 80-percent youth. Four of the five reported that youth made up more than 90 percent of their customer base.

Pannone used this info, at least in part, as the basis for his recommendation to have the studios classified as youth centers.

Councilmen Victor Vega and Dirk Starbuck both said they thought the city was over-reaching by including dance studios in that definition. The same, or a similar opinion was expressed by the 10 community members who offered public comment on the matter.

One of those public speakers was a property manager for the Northside Shopping Center, which is home to Garcia Dance Studio. He said that not only has that studio's owner not objected to having retail cannabis operations nearby, but he personally would feel safer working in the area if there was a marijuana business with an armed guard in the vicinity.

Vega went so far as to make a motion to outright reject dance studios from the youth center classification, saying he felt that the studios are mixed-use, have limited hours and aren’t at any added risk by having cannabis operations nearby. His motion failed in a 2-3 vote, only getting support from Starbuck.

Councilwoman Jenelle Osborne, who was one of the primary authors of the city’s cannabis ordinance, said she felt like the state’s definition of a youth center was broad and that the city would be best served to lean on the advice of Pannone, its attorney.

Councilman Jim Mosby said he objected to Vega’s motion because he felt like a mathematical analysis should be conducted for each studio that took into account the studio's clientele and hours of operation relative to a 40-hour work week. He made his own motion for the city to use that data on a case-by-case basis, but that motion failed when no one offered a second.

Vega and Mosby both argued their positions back and forth, but they were unable to sway each other or any other council members to their respective side of the issue.

Ultimately, the council reached no decision on the matter, which is what led to the status quo — dance studios having the youth center-based cannabis exclusion buffer — remaining in effect.

No representatives of any dance studios weighed in publicly Tuesday night, but Classical School of Ballet owner Angela Mill did submit a letter to the city asking that her studio have the exclusion buffer around it.

“I think we need to be proactive to keep our children safe, and the majority (90 percent) of my clientele are minors under the age of 18,” read a portion of Mill’s letter, dated Feb. 23. “Also, concerned parents would likely not want to sign their child up at a dance studio that is a close neighbor to a bar serving alcohol, or a business selling marijuana.”

The Lompoc City Council is expected to continue its cannabis discussions at its next meeting, scheduled for March 20.

Early plans for that meeting call for the council to decide if it wants to charge city taxes to commercial marijuana operators, and, if so, how much those taxes will be. Any tax that is agreed upon by the council will be put up for public a vote in the Nov. 6 election, according to Pannone.

Lompoc City Councilman Jim Mosby, who is at the center of the city’s decision not to categorize dance studios as youth centers in relation to …

With a pair of split votes, the Lompoc City Council on Tuesday night shot down a pair of utility rate increases that had originally been appro…

As a member of the first Army Ranger unit sent to Afghanistan following the Sept. 11, 2001, terrorist attacks, Donnie Bumanglag is no stranger…

Lompoc City Attorney Joe Pannone discusses how a dance studio could qualify as a youth center during Tuesday night's Lompoc City Council meeting. The topic was key in determining where cannabis businesses can operate in the city.

Lompoc Mayor Bob Lingl, left, listens to Councilwoman Jenelle Osborne during a discussion Tuesday night about whether dance studios should qualify as youth centers. The topic was key in determining where cannabis businesses can operate in the city.