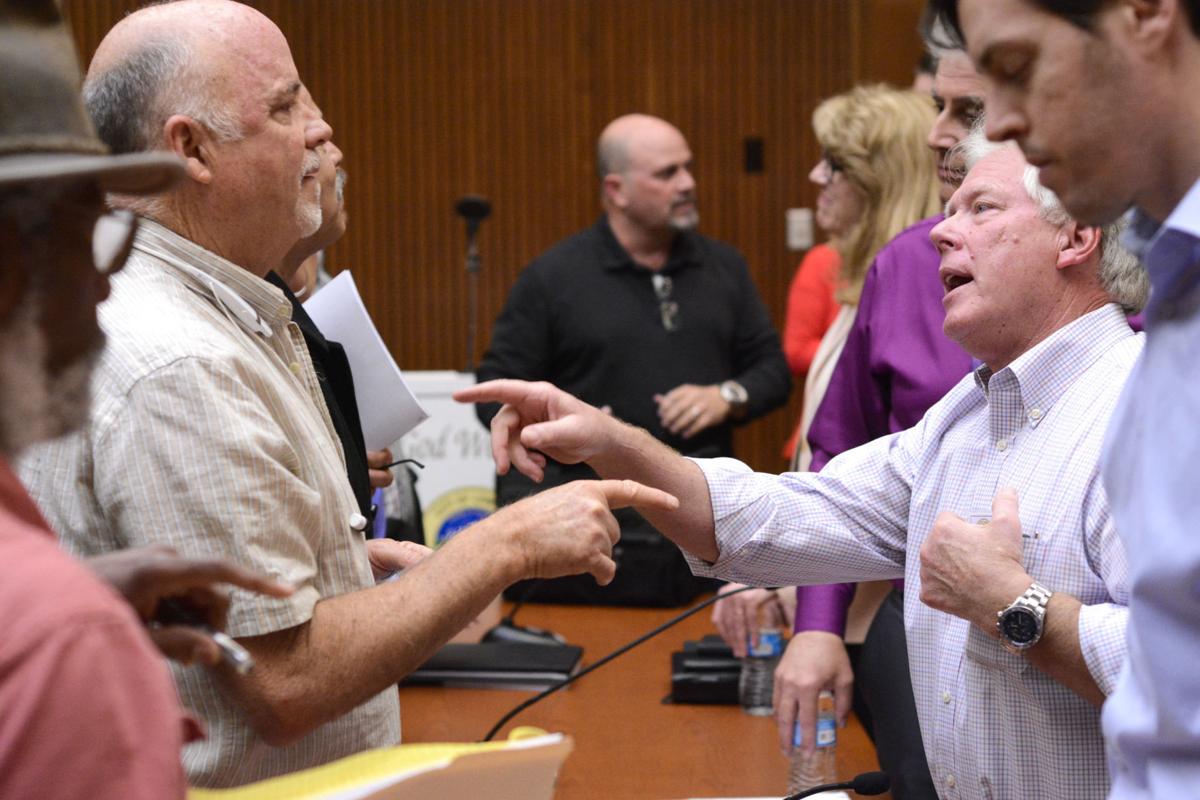 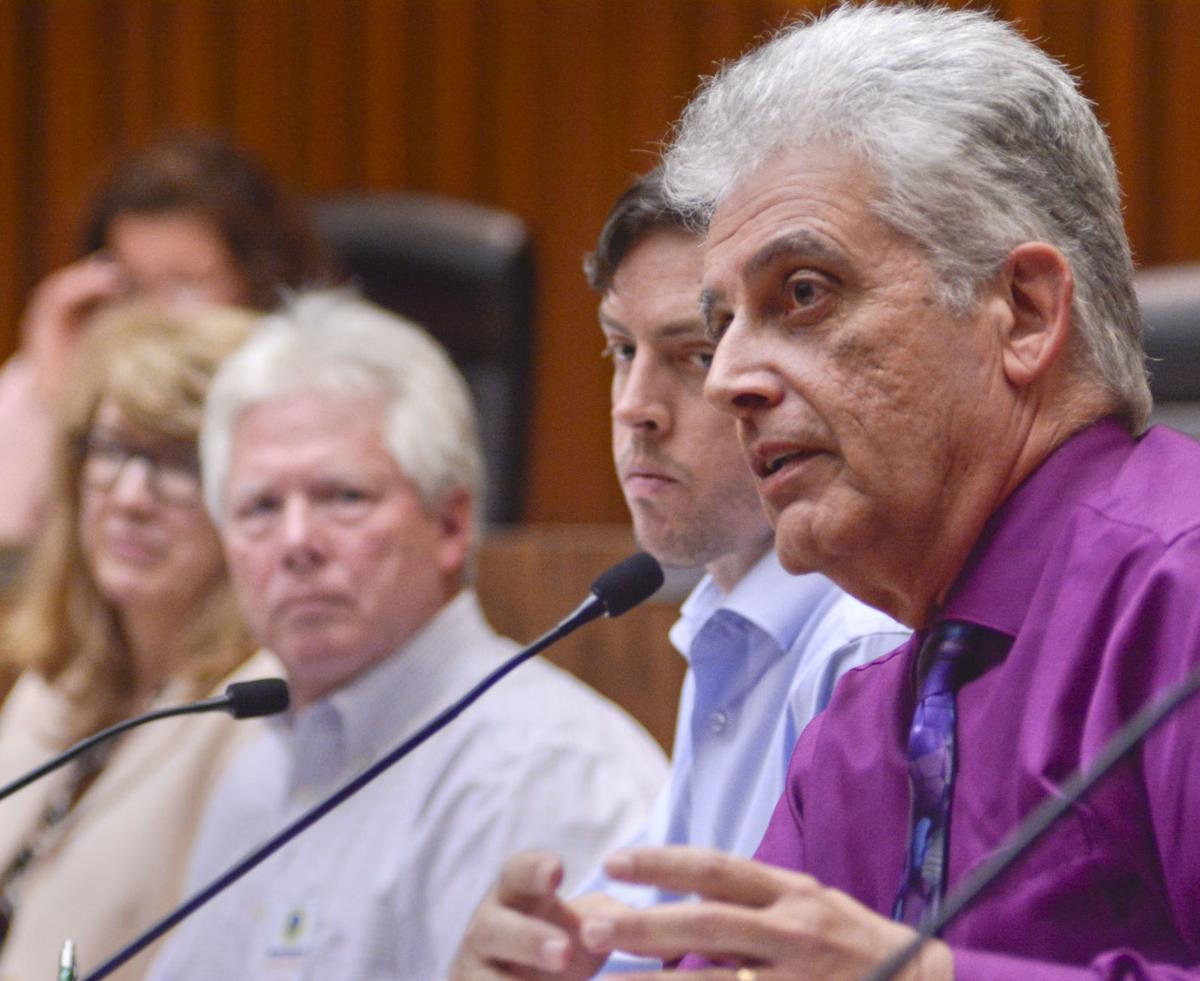 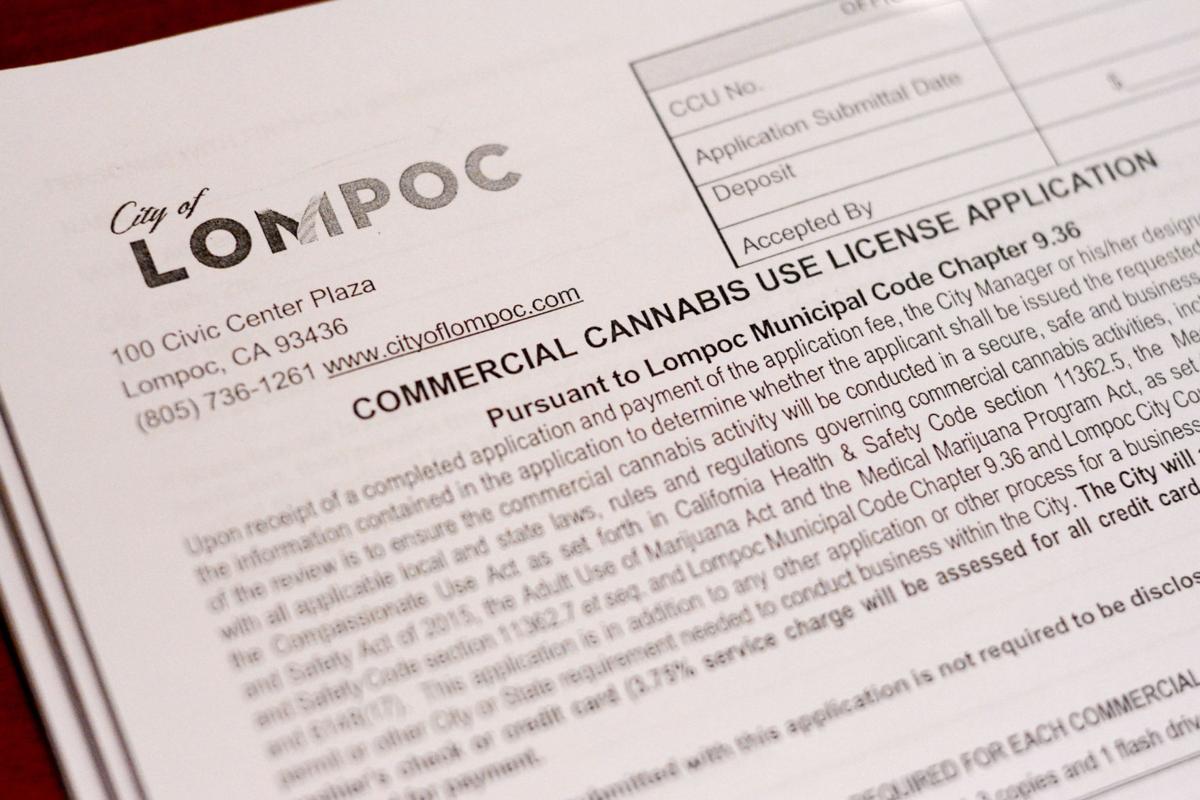 License applications for commercial cannabis businesses were available at the workshop held Monday in the Lompoc Council chambers. 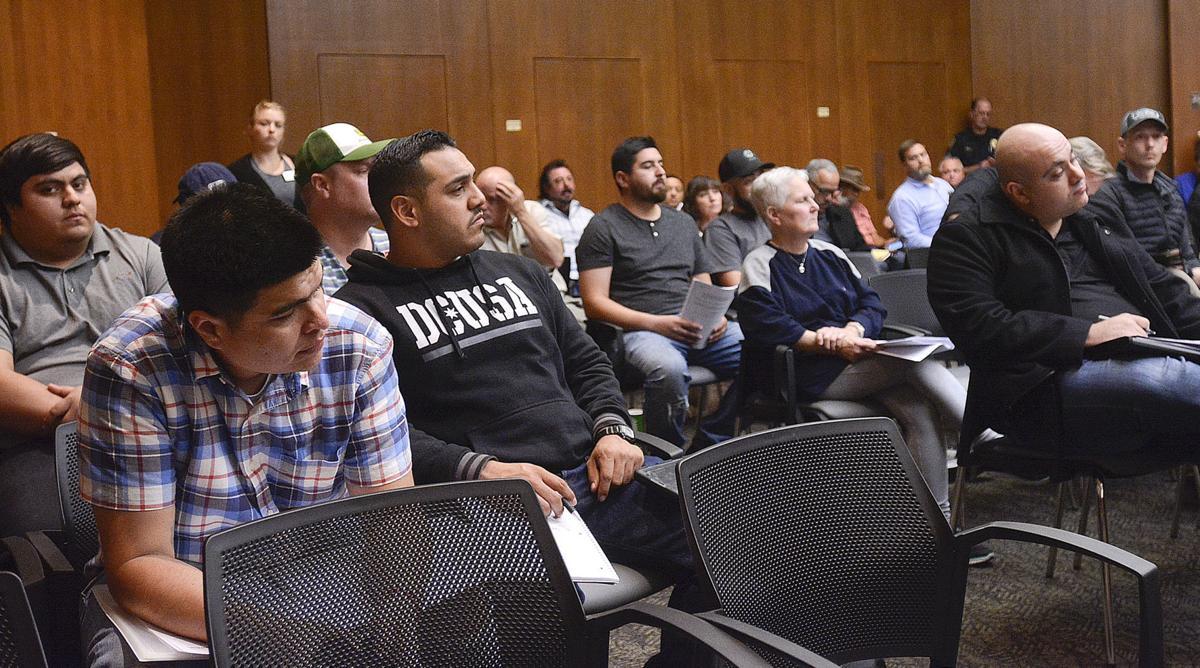 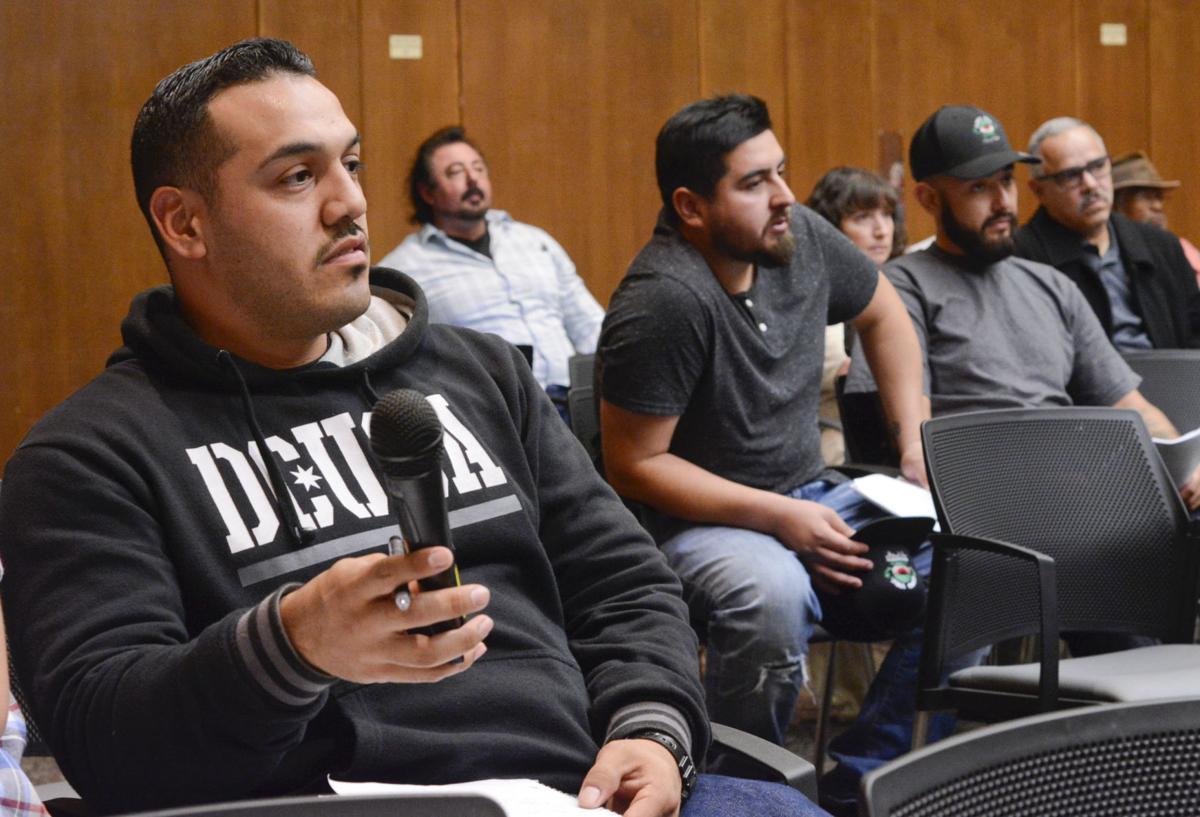 Luis Castaneda, of Lompoc, asks a question during the commercial cannabis use application workshop Monday in the Lompoc Council chambers.

Less than a week after the city of Lompoc began accepting applications for commercial cannabis licenses, the city hosted a workshop Monday to help guide any would-be marijuana operators through what can be a burdensome process.

About 40 people — some from as far away as Los Angeles and Oakland — attended the public workshop, which was held in the City Council chambers at Lompoc City Hall. The discussion was led by a five-person panel that included Interim City Manager Teresa Gallavan, Planning Manager Brian Halvorson and City Attorney Joe Pannone. Also on the panel were Neil Hall and Chris Coulter, employees with SCI Consulting Group, a public finance consulting firm that was contracted by the city to assist with its transition into allowing commercial cannabis in the city.

The event, which lasted about an hour and 15 minutes, included a question-and-answer session that lasted about an hour. The questions ranged from the very specific — like requests for clarifications or explanations of language used in the city’s application — to the very broad, such as one attendee’s query about whether any of the panelists envisioned U.S. Attorney General Jeff Sessions coming into Lompoc and shutting down the industry entirely.

Hall, whose title with SCI Consulting Group is business initiative leader, opened the event with a 15-minute presentation. He pointed out that SCI is working with about 25 to 30 other municipalities and said his hope was that Lompoc would be able to learn from what those other cities and counties have and haven’t done.

“I wish I could tell you we have this thing down perfectly and it’s gonna be perfectly smooth and you won’t have any problems ... but I promise you it’s not gonna go that simply,” Hall said. “There just is not a model for us to do this with, so what we bring is some experience working with other cities that have gone through this before and other cities that are involved in the process.”

During the forum, city officials reiterated that there is no cap on the number of cannabis businesses that will be allowed in the city, and as such, there is no priority given in the application process. The city began accepting commercial cannabis use license applications March 1, just three days after launching a commercial cannabis website — www.cityoflompoc.com/clerk/cannabis.htm — that can be used as a resource for applicants.

Copies of the applications are available on the city's cannabis website, but physical copies were also made available at Monday’s workshop.

Some of the questions on the application — such as those dealing with control procedures, employee screening, record-keeping, how chemicals will be stored and handled, and operation and security plans — include a note informing the applicant that the city considers the requested information as “not disclosable public information.”

One attendee asked if the applicant could write “confidential” in response to other questions to prevent the city from disclosing information from those answers, as well.

Pannone recommended doing so, but he said the city could not guarantee that the information would be kept confidential, at least not yet.

“If there’s a legal reason for the city to be able to prohibit (an answer) from being distributed, or if the state has a rule that says you can’t distribute that information, then we wouldn’t distribute it,” Pannone said. “Just because something isn’t specifically stated as being confidential doesn’t mean it’s gonna get distributed.”

In response to other questions about specific language, Pannone advised that applicants answer questions to the best of their ability at the time of filling out the application — some things, such as names of managers, may be unknown at the time an application is submitted — and update the city on any changes that happen during the process.

A few of the major topics at the workshop dealt with application fees, local taxes and the timeline that applicants could expect applications to be processed.

Regarding fees, the city is charging an $11,900 deposit, plus $1,100 for each person or entity with a financial interest in the potential business, for each application. That money, according to city officials, will be used to offset city costs spent researching and processing each application. Any money that is left over will be returned to the applicant, and, likewise, any costs beyond that initial fee will be charged to the applicant.

The city of Lompoc has not yet outlined a tax schedule for commercial cannabis operations, but Pannone pointed out that the City Council is scheduled to discuss the issue at its March 20 meeting. If the council chooses to implement a local tax, it will be placed on the Nov. 6 ballot for voter approval.

As for the timeline for processing applications, the panelists said they were unable to give any exact windows due in part to the frequent changes and updates from the state.

Hall said that the city is ready now to review applications, but he said that the timing of completing those reviews will depend a lot on how much effort the city has to extend.

“But, it should not take an inordinate amount of time,” he said. “We see no delays on the application review side, and we certainly don’t see the city trying to slow this process down.”

After giving it some thought, Hall predicted that it could take anywhere from a week to a month to fully vet an application. Other panelists pointed out that the cannabis application process is separate from any building or code permits that would-be business owners might also need to obtain.

A lot of the city’s application duplicates the state’s commercial cannabis license application.

One of the attendees at the Monday workshop pointed to some of the differences between the city and state applications and asked, specifically, what would need to be done to create a “separate premises” for businesses that have multiple licenses for multiple cannabis uses in the same building — such as manufacturing and a retail dispensary.

Hall pointed out that this has been an issue in Colorado, where he said some operations have a line of tape running down the floor to serve as a separation marker between two different “premises.”

“I think we’re waiting for the state to come up with a clear definition for what constitutes a ‘separate premises,’” Hall said. “Right now the state is tending to be very lenient on how they’re defining separation of premises, whether that’s a solid wall or nonsolid wall, and the city will kind of have to follow, I think, what the state does as the minimum, but they may require ultimately a stronger separation.”

One of the final questions of the afternoon dealt with Sessions and the federal government, which still considers marijuana to be an illegal Schedule I drug, in the same class as heroin and LSD. One of the attendees asked the panelists if they foresaw Sessions coming to Lompoc to confiscate product and/or shut down businesses.

Pannone had a simple answer for that one: “I’d suggest (you) ask him,” he said.

“This is very new to everybody,” she said, “and we know that there’s gonna be information that we continue to learn from the state as we move forward.”

As the city of Lompoc looks to find a new city manager for the first time in five years, it has once again turned to a familiar face to lead t…

As California moves closer to legalization of marijuana use and sales, there are many different groups — including medical users, adult recrea…

As a member of the first Army Ranger unit sent to Afghanistan following the Sept. 11, 2001, terrorist attacks, Donnie Bumanglag is no stranger…

Just a day after an alleged murder involving members of Lompoc’s homeless population, safety issues involving the homeless, as well as the cit…

Marijuana was back under the spotlight at Tuesday night’s meeting of the Lompoc City Council, during which members of the council, city staff …

The Lompoc City Council moved forward Tuesday night in its potential transition to district-based elections and, separately, gave a vote of co…

'Capital of cannabis on the Central Coast': Lompoc moves toward embracing marijuana industry

License applications for commercial cannabis businesses were available at the workshop held Monday in the Lompoc Council chambers.

Luis Castaneda, of Lompoc, asks a question during the commercial cannabis use application workshop Monday in the Lompoc Council chambers.