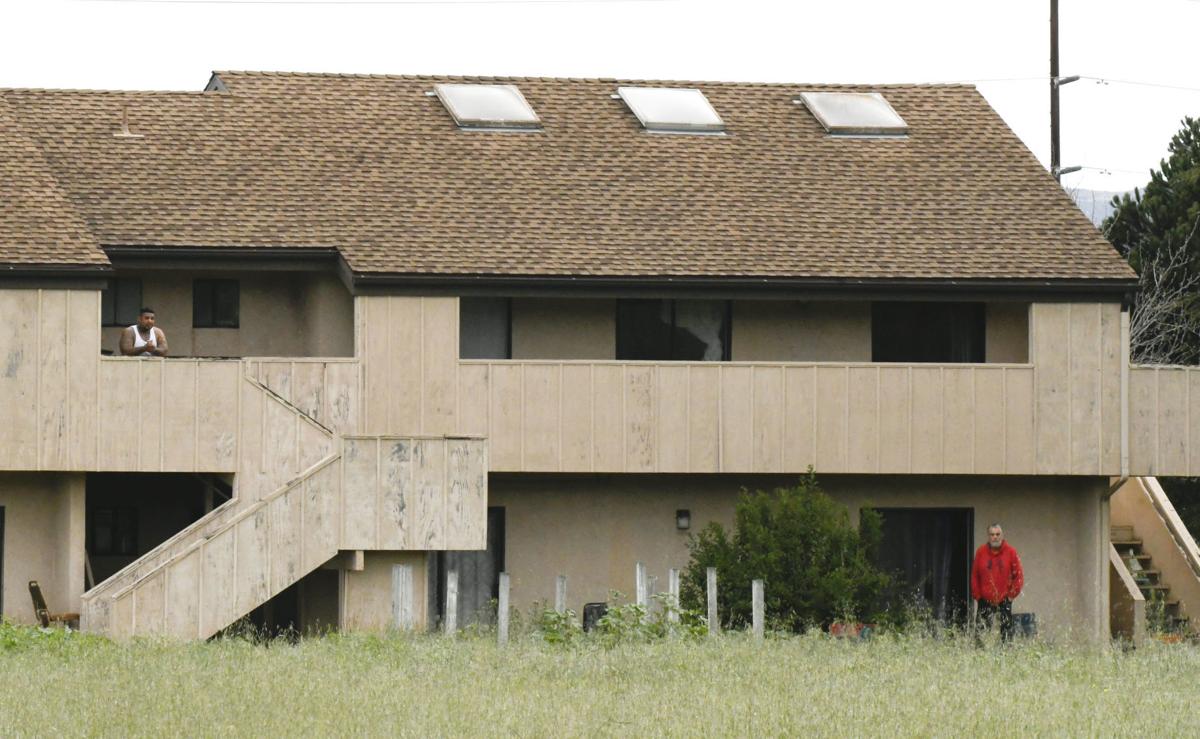 People stand on a balcony and outside the Bridgehouse shelter in Lompoc on Friday morning. The facility is near capacity and clients are being asked to remain on-site amid the COVID-19 outbreak. 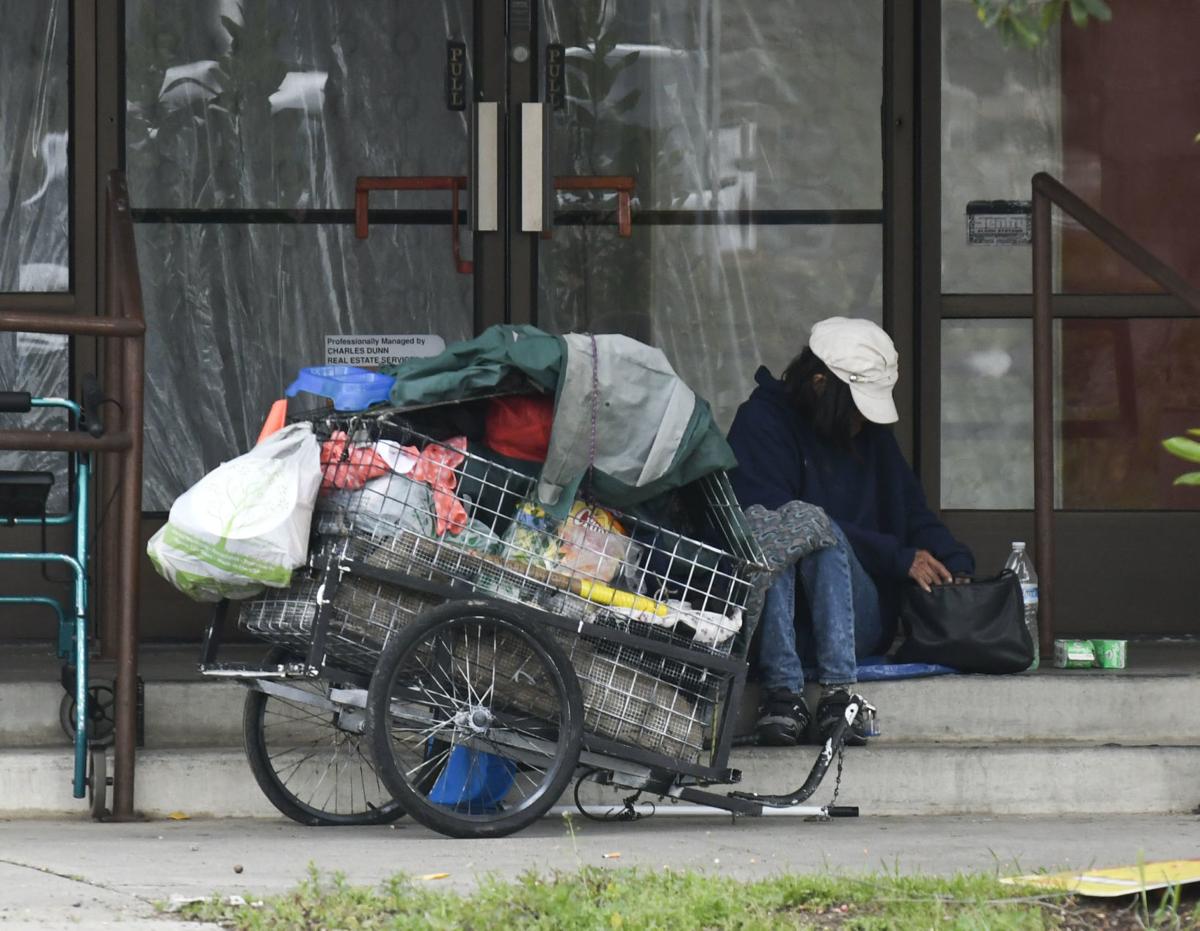 A woman and her belongings are parked at the entrance to a closed store in the 700 block of North H Street in Lompoc on Friday afternoon. Concerns are growing about homeless people as most Californians have been asked to remain at home amid the ongoing COVID-19 pandemic.

With most Californians advised by state and local officials to stay in their homes to limit the spread of COVID-19, that simply isn’t an option for many of the state’s most vulnerable residents.

Concerns have been heightened about how best to provide for homeless people as the coronavirus pandemic continues to wreak havoc on nearly all aspects of regular life.

Locally, Lompoc city officials reported that they are working with area agencies to protect the safety of homeless people and the general public amid the health crisis, while Good Samaritan Shelters has altered its policies in an effort to ensure that people in its Lompoc and Santa Maria shelters are kept safe and protected.

“We are doing what we can to help a vulnerable population,” Brian Halterman, the director of Good Samaritan’s Bridgehouse shelter in Lompoc, told the Lompoc City Council on Tuesday.

While it can be hard to pinpoint exact figures on how many homeless residents live in a particular community, a Homeless Point in Time count performed in January by volunteers with the Santa Maria/Santa Barbara County Continuum of Care reported 216 homeless individuals residing in the Lompoc area, plus another 387 in the Santa Maria area.

Good Samaritan, which operates shelters and other facilities in the Lompoc and Santa Maria valleys, reported Friday that it had nearly reached capacity at its shelters and was no longer accepting new clients. Much of the focus at the shelters, according to the organization, has shifted to maintaining cleanliness and social distancing.

As of Friday, there were about 80 clients at the Bridgehouse shelter in Lompoc, and about 105 at the Good Samaritan shelter in Santa Maria.

Halterman, who also founded the Micah Mission homeless support organization, told the Lompoc City Council that the shelter was cut off from new clients both due to space and health concerns.

“One of the challenges we had … is that we couldn’t get anybody to say, ‘Hey, we will come test someone before you let them in the shelter,” he said.

He noted that one person infected with the coronavirus could compromise the health of everyone at the shelter.

To reduce those risks, he said that staff had implemented changes in cleaning procedures — such as using masks and other safety equipment — and that visitors, including those from support agencies, were not being allowed to enter the premises.

Additionally, he said, people staying at the shelter have been strongly advised to not leave the campus, except for necessary appointments, and that protocols are in place for quarantines, if they become necessary.

“We don’t want to just turn them free,” Halterman said of the clients at the Bridgehouse. “The other thing we are doing is if people are on the end of their time of 90 days [for staying at the shelter] we are not kicking them out on the streets. We are holding them through this time so we don’t expose them to that.”

Alexis Nshamamba, a quality assurance manager with Good Samaritan, noted that the organization’s other services are also continuing.

“We are so proud of our staff working selflessly around the clock right now,” Nshamamba said.

On Friday, the city of Lompoc asked residents to stay in their homes, except for essential needs. The move came a day after Gov. Gavin Newsom ordered similar restrictions statewide, and three days after the Lompoc City Council declared a local health emergency.

City officials reported Friday that staffers, through the city's Community Development Block Grant program, had begun working with local agencies to allocate funding for homeless outreach services during the pandemic.

It wasn't fully known Friday exactly what those services could entail, though the Santa Barbara County Foodbank's emergency food pantry that opened Friday at the Boys and Girls Club of Lompoc was an example of a partnership between the city and outside agencies.

Many of Lompoc's homeless residents who were not in shelters by Friday were in makeshift encampments throughout the city.

On Friday morning, at least one business — the Vons supermarket at 729 North H St. — had a mobile hand-washing station located on the sidewalk between its two public entrances. It was unclear if the station had been been put there by the business or the city.

Anyone who would like to assist Good Samaritan in its efforts can make a monetary donation at www.goodsamaritanshelter.org/donate, or by mailing a donation to Good Samaritan Shelter, 245 E. Inger Drive, Suite 103B, Santa Maria, CA 93454. It was encouraged that mailed donations include "Attention: COVID-19 Emergency Donation."

"The money donated will be used by Good Samaritan Shelter to directly help people by providing food, shelter, and comfort during this difficult time as we face the uncertainty in the days ahead," Nshamamba said.

"Good Samaritan Shelter appreciates the support of the community at this time, and we are committed to making sure the most vulnerable are provided their basic needs of safe housing and warm meals," she added.

For more information on how the city of Lompoc is dealing with the health crisis, visit a city-created resource website at www.cityoflompoc.com/community/coronavirus-local-information-and-resources.

St. Mary of the Assumption

The number of COVID-19 cases in Santa Barbara County climbed to 13 Saturday with the addition of four new cases, while San Luis Obispo County officials reported the number there had climbed to 21 from the 13 reported Thursday.

As a preventative measure to limit the spread of COVID-19, a public health emergency has been declared for Vandenberg Air Force Base.

An emergency operations center that was established by the city of Lompoc to help keep residents informed about issues related to the ongoing COVID-19 outbreak began accepting calls Tuesday.

With schools still closed amid the ongoing COVID-19 outbreak, Lompoc Unified School District leaders have joined with other community partners to provide free childcare for local families that are on the pandemic’s front lines.

Lompoc Unified School District officials announced Wednesday morning that classes would remain canceled at least through the end of April. When schools were first shuttered on March 16, the closures were anticipated at that time to last at least through April 3.

An interactive presentation led by Col. Anthony Mastalir, the commander of the 30th Space Wing, was the third in a series of town halls hosted over the past month by base leaders in an effort to keep the base’s military and civilian personnel informed on how the coronavirus outbreak is affecting life on base.

Christopher Neel, a custodian with LUSD for the past five years, said that he doesn’t believe that he and other custodians have been trained properly in regards to handling this particular coronavirus, and that the current cleaning methods are putting everyone who enters schools sites — including students, staff and parents — at a heightened risk for possible infection.

Superior Home Health & Senior Services has announced that it will help seniors with prescription pick-ups, light grocery shopping, and other errands that are deemed essential. The services will be provided from 8 a.m. to 5 p.m. weekdays. Anyone who who would like to utilize them is encouraged to call 805-737-4357.

People stand on a balcony and outside the Bridgehouse shelter in Lompoc on Friday morning. The facility is near capacity and clients are being asked to remain on-site amid the COVID-19 outbreak.

A woman and her belongings are parked at the entrance to a closed store in the 700 block of North H Street in Lompoc on Friday afternoon. Concerns are growing about homeless people as most Californians have been asked to remain at home amid the ongoing COVID-19 pandemic.