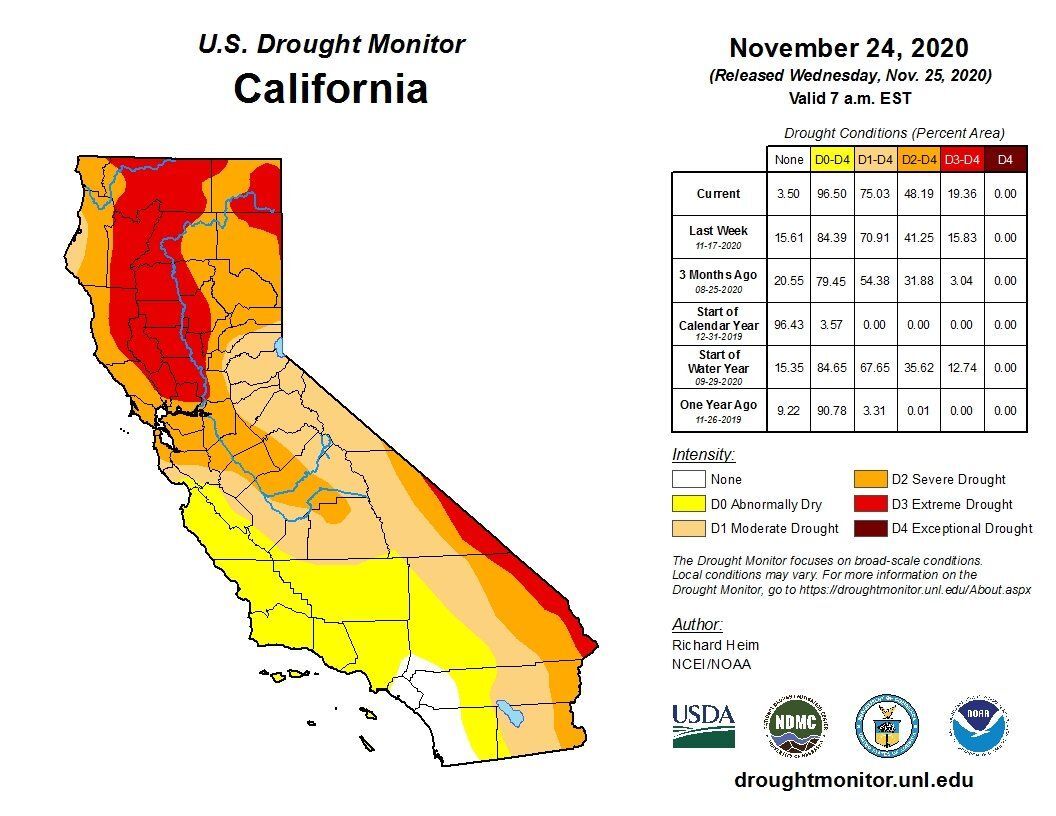 This image from the U.S. drought monitor shows the conditions in California as of Nov. 24.

I was afraid this was going to happen. Due to below typical rainfall and above-average temperatures, the entire Central Coast has moved from "None" to "Abnormally Dry (D0)" drought conditions last week. Maybe the drought never really left us, only taking a short break, as the rain gauge at Cal Poly's Irrigation Training & Research Center recorded only 16 inches of precipitation last rain season (July 1, 2019, through June 30, 2020). Normal rainfall at this location is about 23 inches.

The last time the Central Coast was in "Abnormally Dry (D0)" drought condition was February of this year when the Eastern Pacific high become anchored off California and blocked incoming storms from reaching much of the state.

Most meteorologists thought it was the typical mid-winter dry spell, which historically lasts for a few weeks, even during the wettest years. As a mostly dry January turned into a wholly parched February, the heart of our rainfall season, many started to worry. In fact, rainfall dropped to about a third of the average.

The lack of moisture in February drove most of California into the D0 (abnormally dry) to D1 (moderate drought) category, according to the U.S. Drought Monitor.

However, the Eastern Pacific high shifted into the Gulf of Alaska, which opened the storm door to the Central Coast in March, and our weather pattern changed drastically. Overall, most Central Coast locations went from about a third of average rainfall at the beginning of March to one-half to two-thirds of typical rainfall by the end of this month.

This well-above-average rainfall for March dropped the drought level from D1 (Moderate Drought) category to the D0 (Abnormally Dry) level, the lowest grade of drought. As the rains continue into April, the Central Coast exited from a drought condition. The "Mini Miracle March" saved the rain season; however, the total rainfall season amounts ended lower than average.

Since April, it has been nearly dry.

Rainfall amounts so far this season (July 1, 2020, through June 30, 2021) have dropped to 12 percent of average at the San Luis Obispo County Airport. Both the Paso Robles and Santa Maria airports have seen about a third of an inch or about 15 percent of normal. The tipping-bucket rain gauge at the Diablo Canyon Power Plant has recorded nearly three-quarters of an inch, while Rocky Butte near Hearst Castle and the Walter Ranch above Cambria have recorded over one inch of precious rainfall.

The combination of lack of rainfall and well-above-average temperatures (Paso Robles Municipal Airport averaged 10 degrees warmer than typical in October) has driven most of Northern California into D2 (Severe Drought) and D3 (Extreme Drought), and the Central Coast could follow and here is why.

It appears that the "Ridiculously Resilient Ridge of High Pressure," made famous by the previous drought, has redeveloped. Not only has this high-pressure ridge kept California dry but also has produced persistent northeasterly (aka Santa Lucia/offshore) winds along the Central Coast. Lately, we have not even seen much of the marine layer due to this northeasterly flow.

The current La Nina condition is wrapping itself around the equator, and it is becoming stronger. "The presence of a La Nina, the notorious 'Diva of Drought' present at the equator, doesn't bode well for winter rainfall," said retired climatologist Bill Patzert at NASA's Jet Propulsion Laboratory. Historically, La Niña conditions typically produce lower-than-average winter rainfall. However, there have been La Niña years that have seen well above average rainfall amounts.

Another reason that continues to gain interest was put forth several years ago by Dr. Jennifer Francis of Rutgers University. She hypothesizes that Arctic Amplification (the Arctic is warming at a quicker rate than the rest of the Earth) will increase jet stream waves' amplitude. In other words, the upper-level winds are more likely to travel in a more north to a south pattern. The polar jet stream often forms the border between the frigid air to the north and the warmer air to the south. As a rule of thumb, the higher the temperature differential between these two air masses, the faster the upper-level winds will blow. The faster the jet stream, the more direct route it takes. The slower the jet stream, the more likely it will tend to change direction.

In California, the most advantageous pattern is for the upper-level winds to travel in a direct path across the Pacific to the coast; as the mid-latitude westerly winds increase, the higher the likelihood of rain.

This rain season is young, and the synoptic conditions can undoubtedly change overnight, but the long-range models indicate a dry first half of December, if not longer.

If the skies remain clear, a couple of astronomical events will be visible in the December sky: the Geminid Meteor Shower on the night of December 13 and an once in a lifetime event with the conjunction of Jupiter and Saturn that will appear as a single "star" on December 21, 2020.

Due to COVID 19 pandemic, our team has had to suspend tours of the Diablo Canyon Power Plant and the thousands of acres of pristine lands surrounding it.

While the tours are on hold, we made some short virtual tour videos of the Diablo Canyon Lands and Facilities, which can be viewed on YouTube at https://www.youtube.com/watch v=vs4OSVPejKk&feature=youtu.be.

A Carmel woman was arrested Tuesday after reportedly leading California Highway Patrol officers on a vehicle pursuit from Paso Robles to Santa Maria in a stolen landscaping truck towing a trailer.

When unemployment ran out in December and after learning the business had enough cash to last only until January, Rancho Bowl co-owner Ashlee Carranza made the decision to reopen Tuesday despite COVID-19 restrictions.

When unemployment ran out in December and after learning the business had enough cash to last only until January, Rancho Bowl co-owner Ashlee Carranza made the decision to reopen Tuesday despite COVID-19 restrictions.

The president and CEO of the Orcutt nonprofit OASIS senior center resigned Friday following public backlash over his attendance at a political rally in Washington D.C. on the same day a violent mob of rioters stormed the U.S. Capitol building last week.

A 58-year-old Lompoc man was killed Thursday after he was ejected following a vehicle rollover on Highway 246, west of Buellton.

4 arrested in 2 police pursuits that ended near Santa Maria

This image from the U.S. drought monitor shows the conditions in California as of Nov. 24.