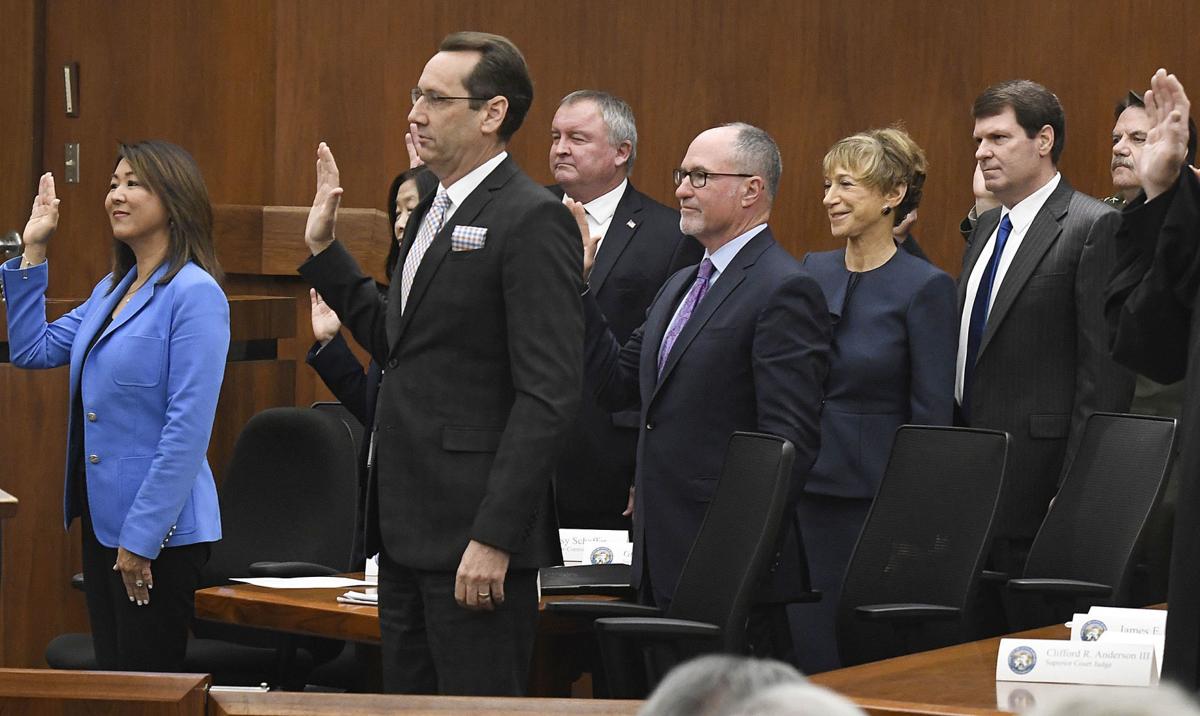 Elected County officials, including Fifth District Supervisor Steve Lavagnino, center, and newly elected Second District County Supervisor Gregg Hart, in glasses behind him, are sworn in to office, on Tuesday. 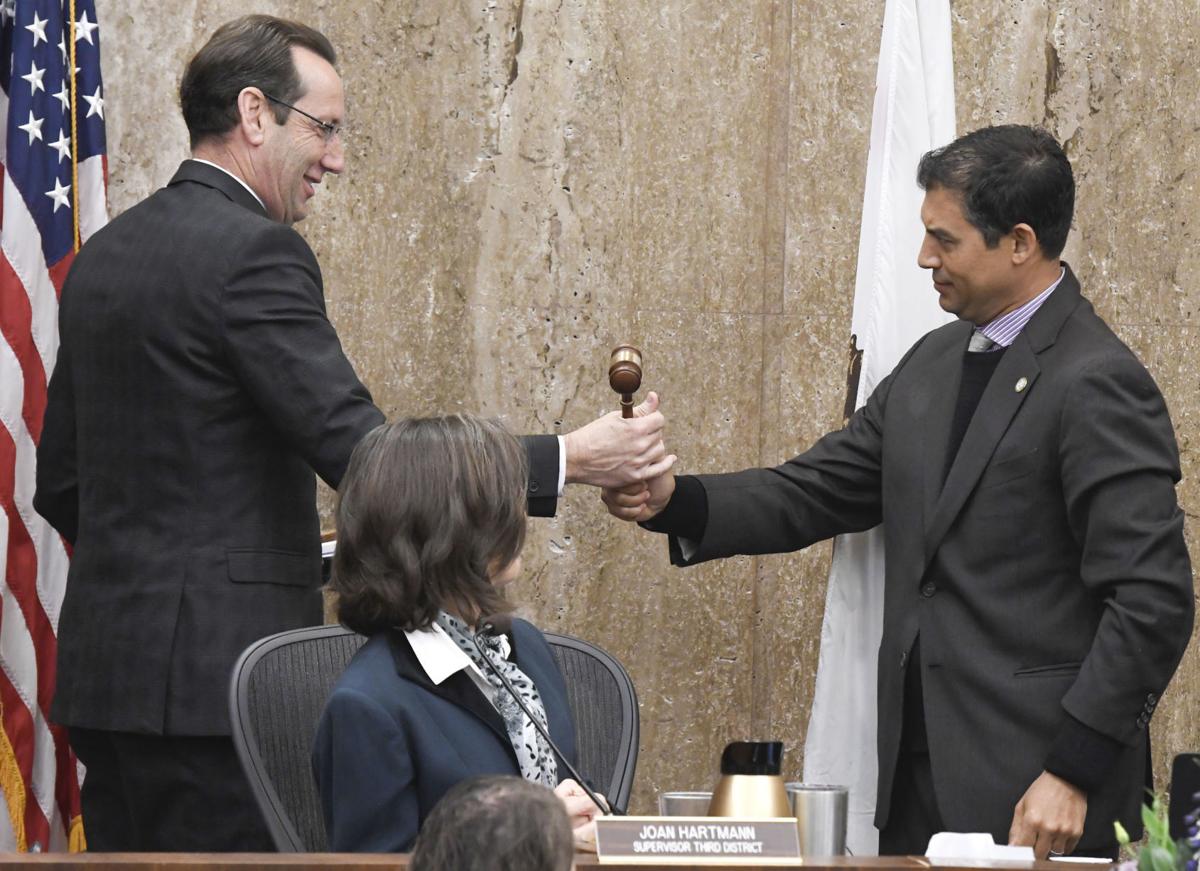 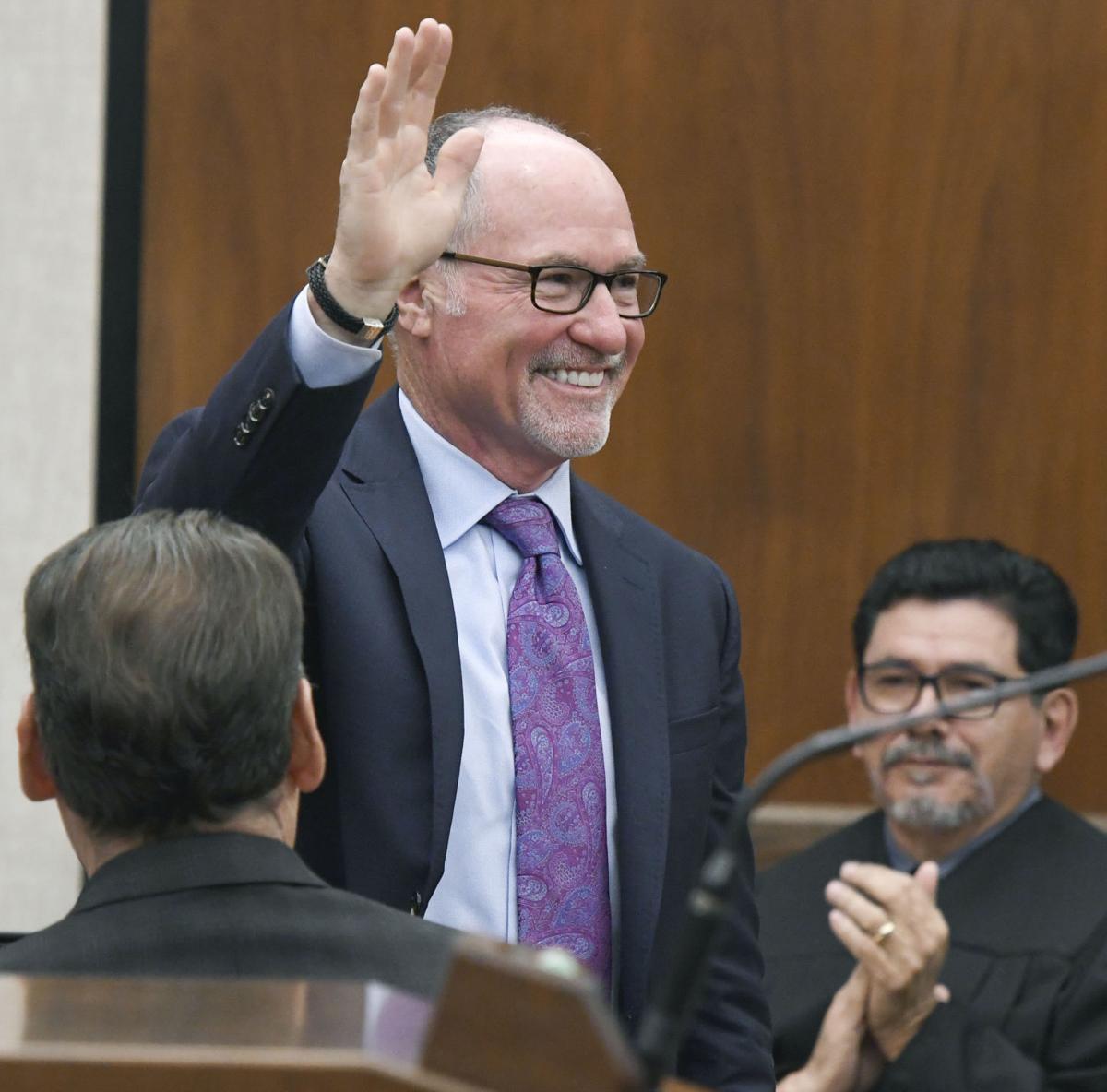 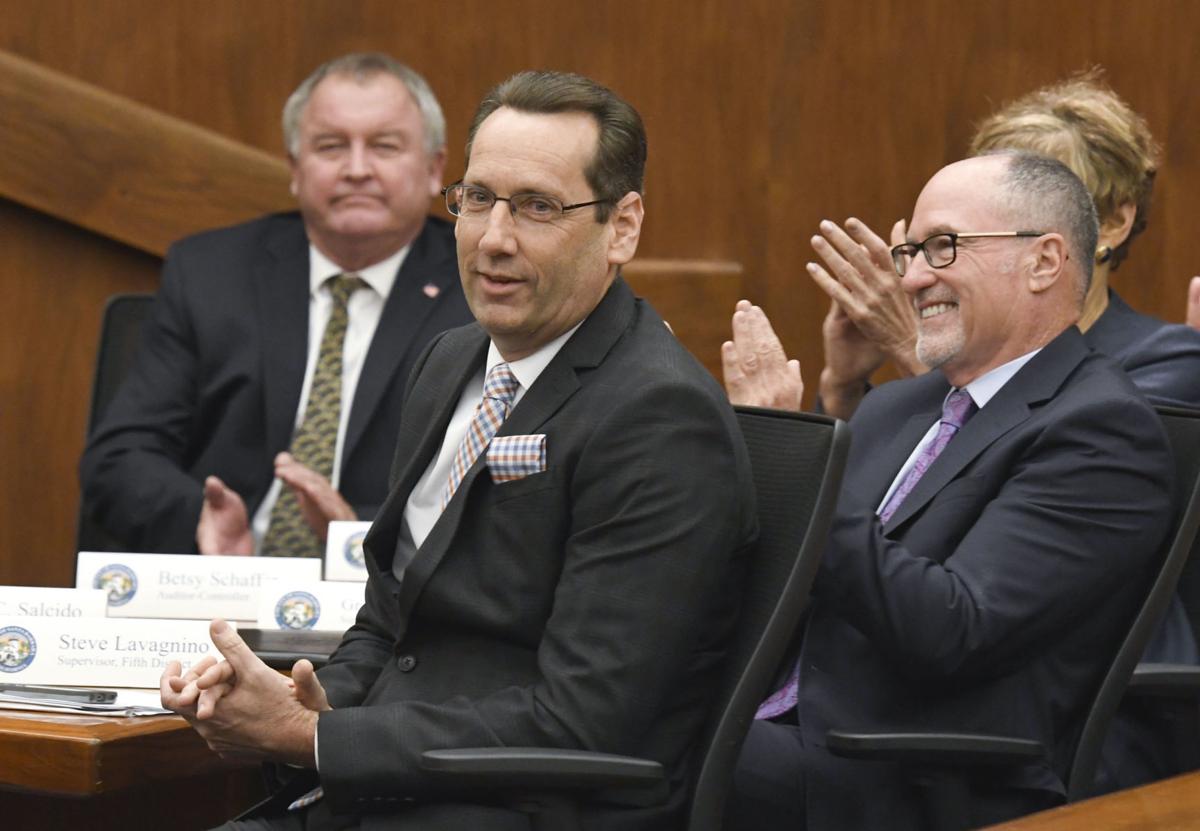 Fifth District Supervisor Steve Lavagnino will lead the Santa Barbara County Board of Supervisors in 2019 after being chosen chairman by the rest of the board members during swearing-in ceremonies for all newly elected and re-elected county officials Tuesday.

Board newcomer Gregg Hart, who ran unopposed to fill the 2nd District seat left vacant by the retirement of Janet Wolf, was picked to serve as vice chairman for the year at the board meeting in Santa Barbara.

The ceremonies took up most of the morning with music and dance, the introduction of elected officials who were then administered the oath of office, a keynote address, the election of the chairman and vice chairman of the board and the gavel presentation, followed by a recess for a reception.

After assuming the gavel, Lavagnino, who ran unopposed for re-election, thanked county employees and his own staff for their many and varied efforts and noted how the county’s response to the 1/9 Debris Flow last year pointed out “the difference between us and the federal government.”

He said those in the federal government, which is virtually shut down and not functioning, are focused on partisanship, casting blame and pushing their own agendas, resulting in nothing being accomplished.

“I’m thankful to serve with colleagues who don’t always agree but work together to resolve problems,” he said.

He also reviewed some of the county’s accomplishments, from obtaining $420 million from the state to finish widening Highway 101 to inking a government-to-government memorandum of understanding with the Santa Ynez Band of Chumash Indians, with which the county has historically been at odds.

But Lavagnino also said the board will be facing some tough decisions in the future.

“I’m confident that working together across all ideologies, we will find solutions,” he said.

Hart said it is “an honor and privilege to serve” on the board, adding he is filling some big shoes in following Wolf as 2nd District supervisor.

“I’ll try to emulate the professionalism and commitment she brought to the job,” he said.

He also provided his own thoughts on a theme expressed by previous speakers by relating his recent travels through Europe where, in the major cities and capitals, he saw no people living on the streets and panhandling.

He finally asked an Amsterdam policeman why that was so, and the answer was: “We take care of people in our country.”

He indicated that is something he hopes people can keep in mind in governing the county.

In relinquishing the chairman’s gavel, 1st District Supervisor Das Williams noted that institutions like the county’s government move very slowly on issues, simply because of their size.

“Those who thought we could not move fast for those in need should look at the last two years,” Williams said. "I’ve seen, by the sheer dedication of individuals in this institution, a willingness to put much more time and life into it than they would typical jobs. They think of this as family.”

He also said that, as a community, “we’re a pretty fractious bunch,” but that was different last year.

“In a community famous for fighting with each other, we did something different last year,” Williams said. “We fought for each other. … Fences were ripped down by a force greater than ourselves … .”

He said the county staff and the community responded to tragedy and prepared for disaster with not only the usual physical resources but also “spiritual resources.”

“It’s with a little relief I pass this gavel to you, Mr. Lavagnino,” he said. “I wish you a quieter year … in which we make progress.”

The keynote address was given by Rogelio Flores, retired Santa Barbara County Superior Court judge, who offered a series of lessons drawn from his life experiences as well as his years spent on the bench.

His lessons came from dealing with alcoholics and drug addicts — “sometimes we have to do things differently … We can, in our careers, be agents of change” — to experiences with immigrants — “remember people dream of being here and loving this country as much as we do … .”

He also touched on the importance of mentoring. “We need a mechanism to get young people (involved) in the system so they can see what we do,” he said. And then thanked veterans and their families — “Every American needs to take their hats off to you for the sacrifices you have made.”

Flores closed with a wish for the board and staff.

“My wish for 2019, and for the rest of your lives, I wish you serenity and acceptance,” he said.

He said kairos means an appointed time, a gift that’s been given, and he advised people to “not become isolated by the ticking of the clock.”

Shalom refers to “holistic welfare,” he said, and if supervisors seek the well-being of the citizens of the county, it will become their well-being.

“The term means we who have power should pay special attention to those who don’t,” Shaffer said.

Other highlights of the ceremonies included an impressive presentation of the colors and Pledge of Allegiance led by the Los Prietos Boys Camp color guard, mariachi music by Josue Hernandez as people arrived for the meeting and music and dance performances by part of the Righetti High School Marimba Band and Ballet Folklorico, directed by Ricardo Gabaldon.

The time of county government

Tuesday’s meeting marked the 169th for the Santa Barbara County Board of Supervisors.

The next meeting of the Santa Barbara County Board of Supervisors is set for 9 a.m. Tuesday, Jan. 15, in the Board Hearing Room of the Joseph Centeno Betteravia Government Administration Building at 511 E. Lakeside Parkway in Santa Maria.

'Devastated': High school seniors grapple with reality of not returning to school

San Luis Obispo County reported its first death from COVID-19 on Saturday, even as no new cases of the disease were reported by county officials for the first time since March 18, leaving the total cases there holding at 93.

Elected County officials, including Fifth District Supervisor Steve Lavagnino, center, and newly elected Second District County Supervisor Gregg Hart, in glasses behind him, are sworn in to office, on Tuesday.